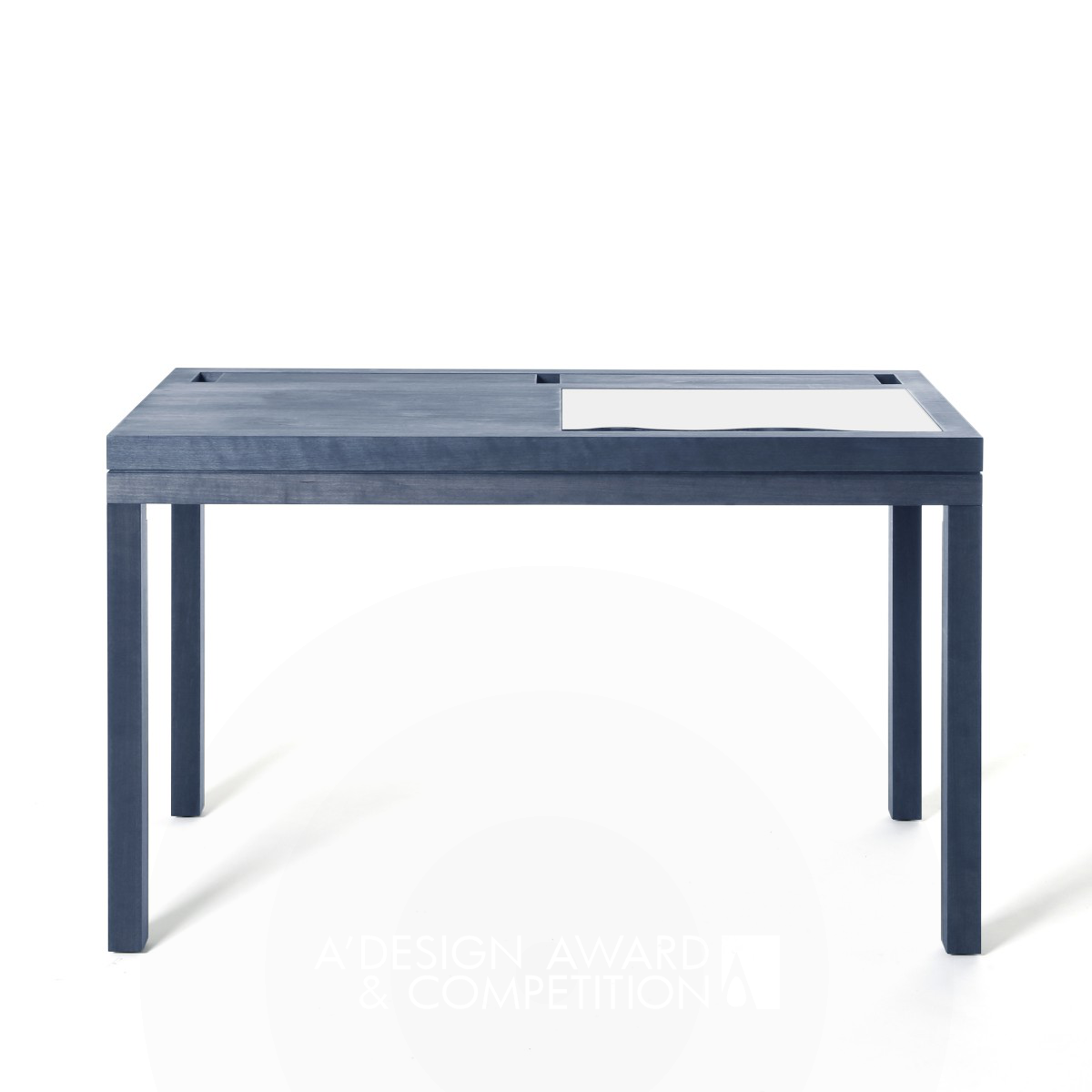 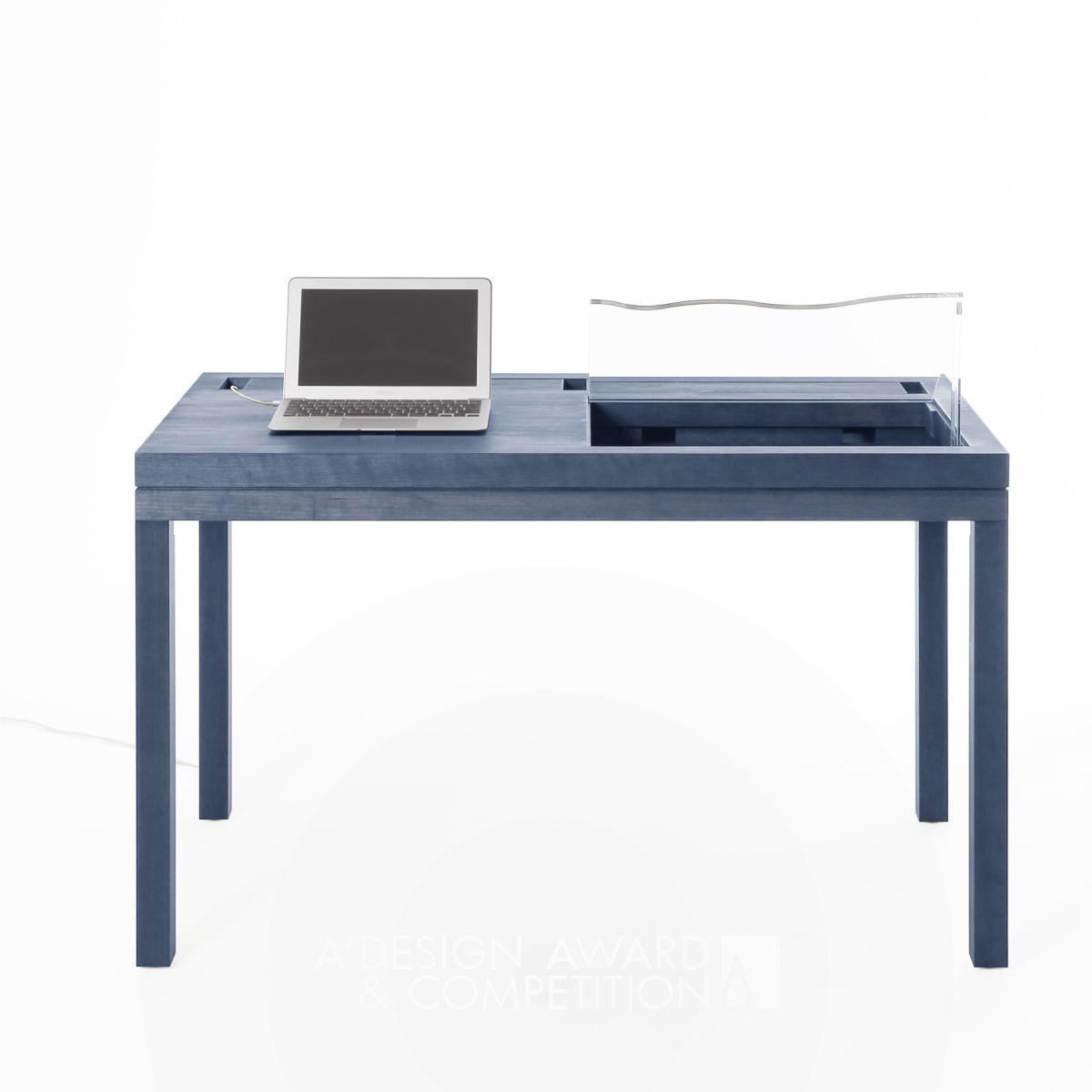 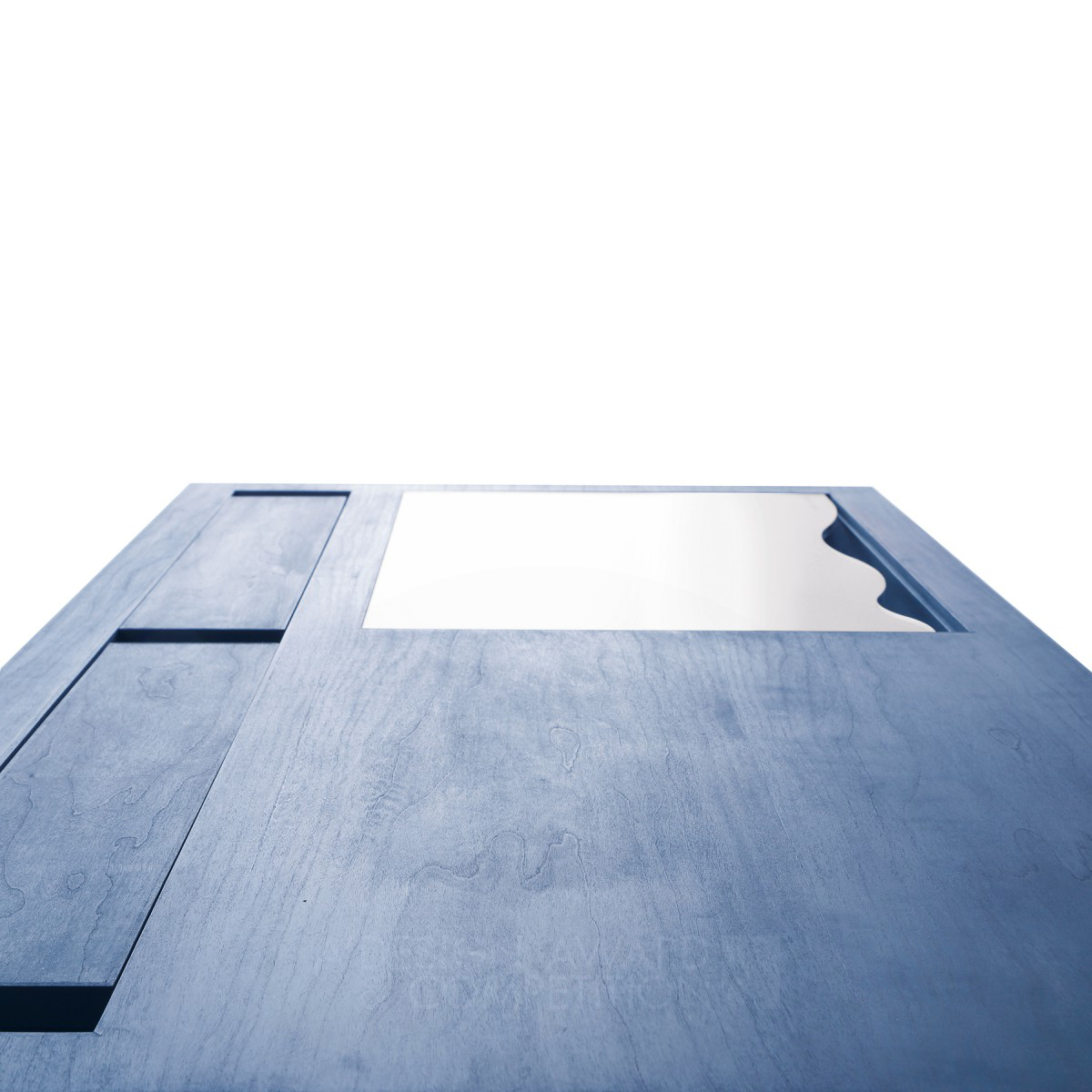 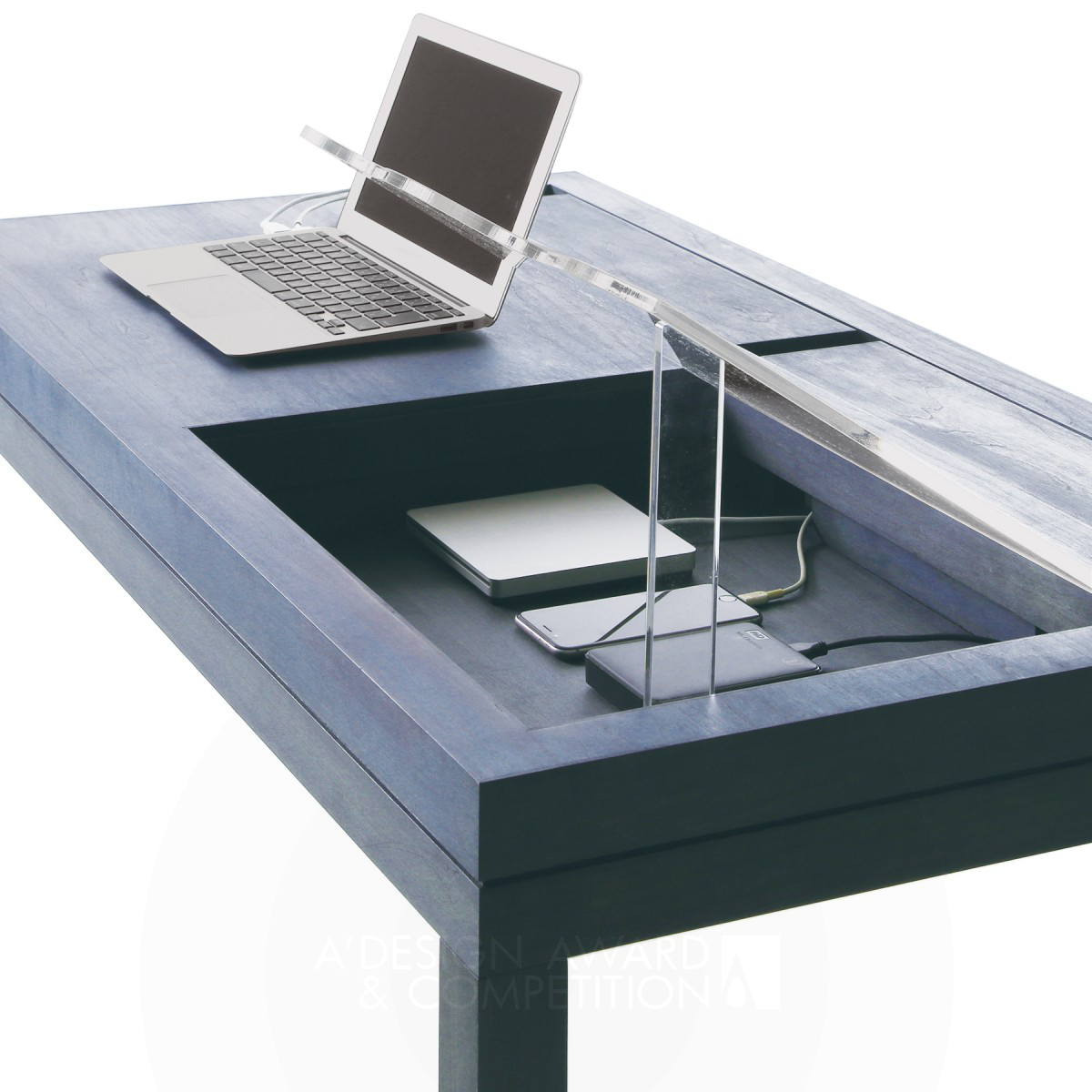 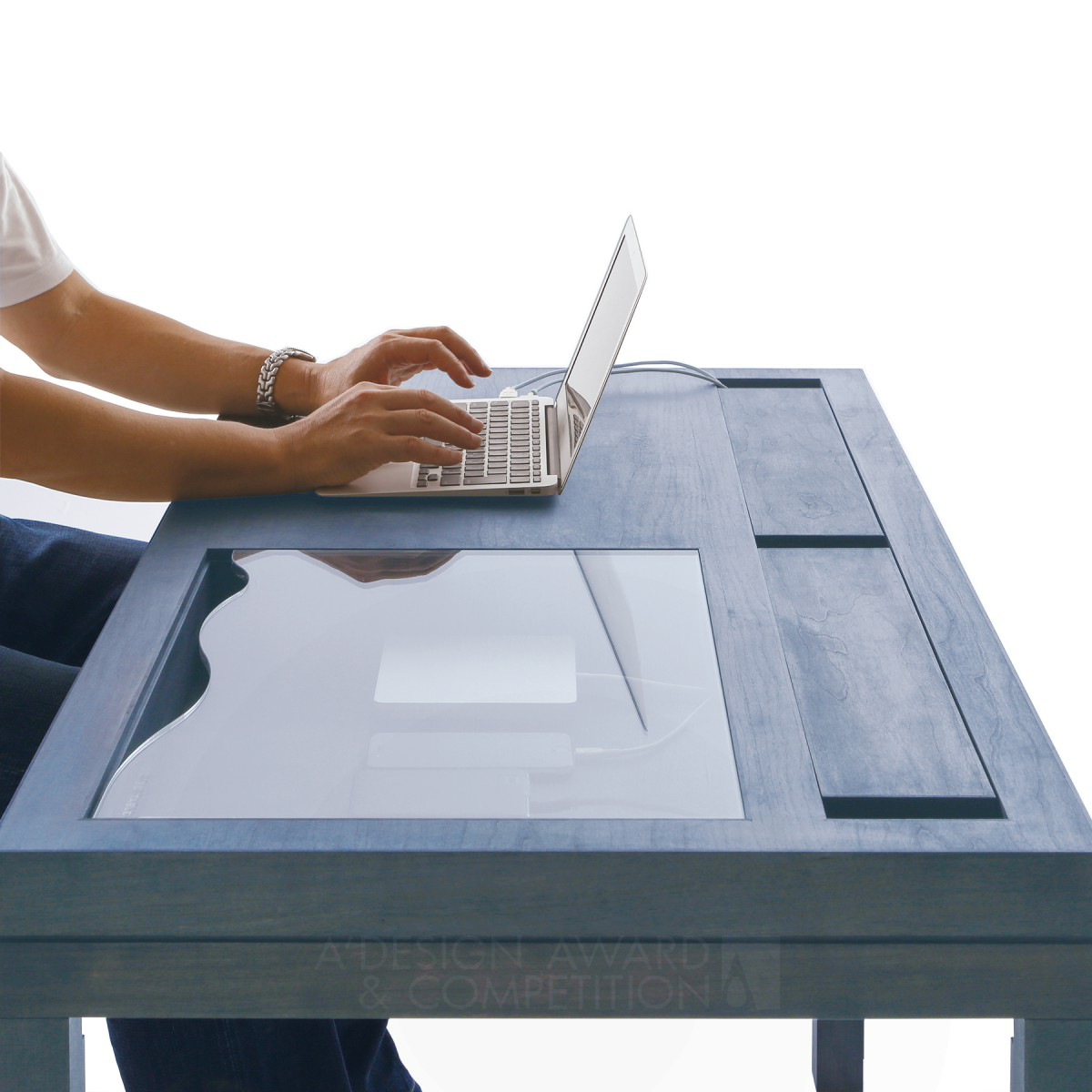 TK : Consenrable's vision is to innovate the daily lives of modern intellectuals using various devices to be simple by Japanese sensibility. I think our lifestyles have changed rapidly with digital devises, but the designs of desks have not changed yet. Your desk might be flooded with various types of dusty wirings when you place your PC or chargers of various devices, so I wanted to improve those negative experiences. Especially in the era when Work from Home is common, our work desks at home also should be sophisticated. I designed this to provide better experiences on desks for home PC users, with using the top plate of indigo dyed wood grains that resemble the calm sea surface.

TK : I have focused hiding wirings and devices to fit in a simple form. For example, the wiring space behind the top plate is the size of W1050mm D100mm H750mm that fits for OA taps connected with various outlets such as PC adapters. A cord of the OA tap can be embedded in the grooves of the legs. Regarding the device space, not only can devices be stored, but they are also connected to PC through the wiring space. This desk is designed to be simple as if there were no wiring with it. In addition, I have made the wood grains resemble the calm sea surface with indigo dyed finish trying to provide calm experiences on the desk to home PC users.

TK : Consentable/ WT Ao, which is given the Bronze A' Design Award this time, will be exhibiting at "Japan Ingenious Exhibition" curated by Design Pier and NYCXDESIGN* scheduled to be held in NY this fall. *Design Pier is a Hong Kong-based global curation team, and NYCXDESIGN is a design event held in New York, USA. (The detailed schedule is being adjusted due to the influence of COVID-19.) While making effective use of this A' Design Award for promotional activities, I would like to actively participate in various exhibitions in the future.

TK : It took about a year and a half to develop the concept of this table. The idea was a desk to solve the problems for both noisy PC work desk and decline of craftsmen. After the idea came up, I drew pictures and drawings, made full-scale mockups, researching craftsmen and repeated careful verification for many times, so it took longer than usual.

TK : This design is intended for commercialization. It is not commissioned. I would like to exhibit at various exhibitions in the future, and I would like to introduce and sell it on the Consentable brand website.

TK : The products I designed are made to order and will be sold under the Consentable brand. Consentable’s production is usually outsourced to the most suitable craftsman for each product. In the case of Consentable/ WT Ao, it will be manufactured by a Japanese woodworking workshop called KOKKOK and a woodworking indigo dyeing team called Ao. If there will be an offer in the future, I would like to actively consider selling and leasing production rights.

TK : Consentanle/ WT Ao can keep the top plate clean by storing the noisy wirings. In Japan, there is a traditional culture that emphasizes "Seiri Seiton" means cleanliness and simplicity of the workplaces in order to do a good job. I wanted to realize that idea on PC work desk.

TK : I don't have any other particular design or designer in mind, but if there is a design that has influenced me, it may be a simple and rational design of Japanese tea room or tea utensils. Anyway, I made a very simple design that I imaged in my mind.

TK : It is designed for all PC users in the world, but I am hoping that it is liked by foreign users who are highly interested in Japanese woodworking technology. Consentable have a strong desire to let more people in the world touch the wonderfulness of Japanese craftsmanship.

TK : I think it is quite rare to use the traditional Japanese technique "Aizome", indigo dyeing for finishing. Also, I think that no other similar products have so called Japanese design, which emphasize flexibility, such as the assembly type and the use of movable lids.

TK : We convey two meanings in this coined word of Consentable. One is Able to be connected to Concent which means outlet in Japan, and the other is Able to be agreed. With this concept at the core, we will be designing and producing various types of digital life furniture with Japanese craftsmanship.

TK : I used MacBook, digital pen tools, sketchbooks, pencils, the internet, and design books for concept-stage research. I especially studied the entire history of desk design. Once I decided on a concept, used Adobe Illustrator to draw the details during the design phase. Then, I made a full-scale mockup with craftsmen and completed the design by trial and error for detailed usability.

TK : I think it is so unique that indigo dyeing is used for the woodwork finishing. It’s Japanese “Aizome”, traditional indigo dyeing technology by Japanese craftsmen. To develop the color of indigo on wood, over 3 times of hand-dyeing works are needed. After that, the wood grains change their textures like the surface of calm sea with glossy indigo.

TK : I have collaborated with "Ao.", who specializes in solid woodwork dyed with indigo in Tokyo. "Ao." carefully select and utilize the fine quality of woods, bringing them into the daily life with the Japanese craftsmanship, delicately handmade one by one. "Ao." means “Blue” in Japanese, the beautiful color of indigo.

TK : I have researched the history of the table before designing. For example, the oldest design of the table in record was a simple wooden one in the ancient Egyptian era (BC. 2500), and after that, the design of table has been evolved into different types to suit the diversification of various lifestyles. On the other hand, ancient chairs seemed to have the meaning of "a symbol of power." I thought it very interesting that the design of the table does not have strong meanings and seems to be treated as purely functional in their history. After researching this background, I decided to design the Consentable / WT Ao with a focus on functionality.

TK : I think the problem is that the selling price is high because it is manufactured by a method that is not mass-produced. I am thinking seriously how to solve the contradictory situation between keeping the craftsmanship on it and sell at a reasonable price for many users.

TK : One day, I got an email from the A' Design Award. Fortunately, it was just the time when the Consentable / WT Ao was completed for the exhibition of NYCXDESIGN2021, so I decided quickly. As a result, I was very happy to apply.

TK : WT kara WT Ao de,`Aizome' no shiagari dake o ni kaeta dakenanoni kyū ni dezain hyōka ga yoku nattanoni odorokimashita. Tsumari,`mitame' ga dezain hyōka ni totemo kōka-tekidato aratamete jikkan shimashita. volume_up 89 / 5000 翻訳結果 I have been surprised that the design evaluation suddenly improved even though I changed only the finish of "Aiome" from WT to WT Ao. In other words, I have realized once again that "appearance" is so effective and important for design evaluation. It goes without saying that the emphasis is on pursuing the concept and functionality, but I would like to be more aware of the importance of "appearance" in the future.

TK : I think it’s enough. Thanks to you, I was able to organize my own way of thinking on my design again in answering this interview.