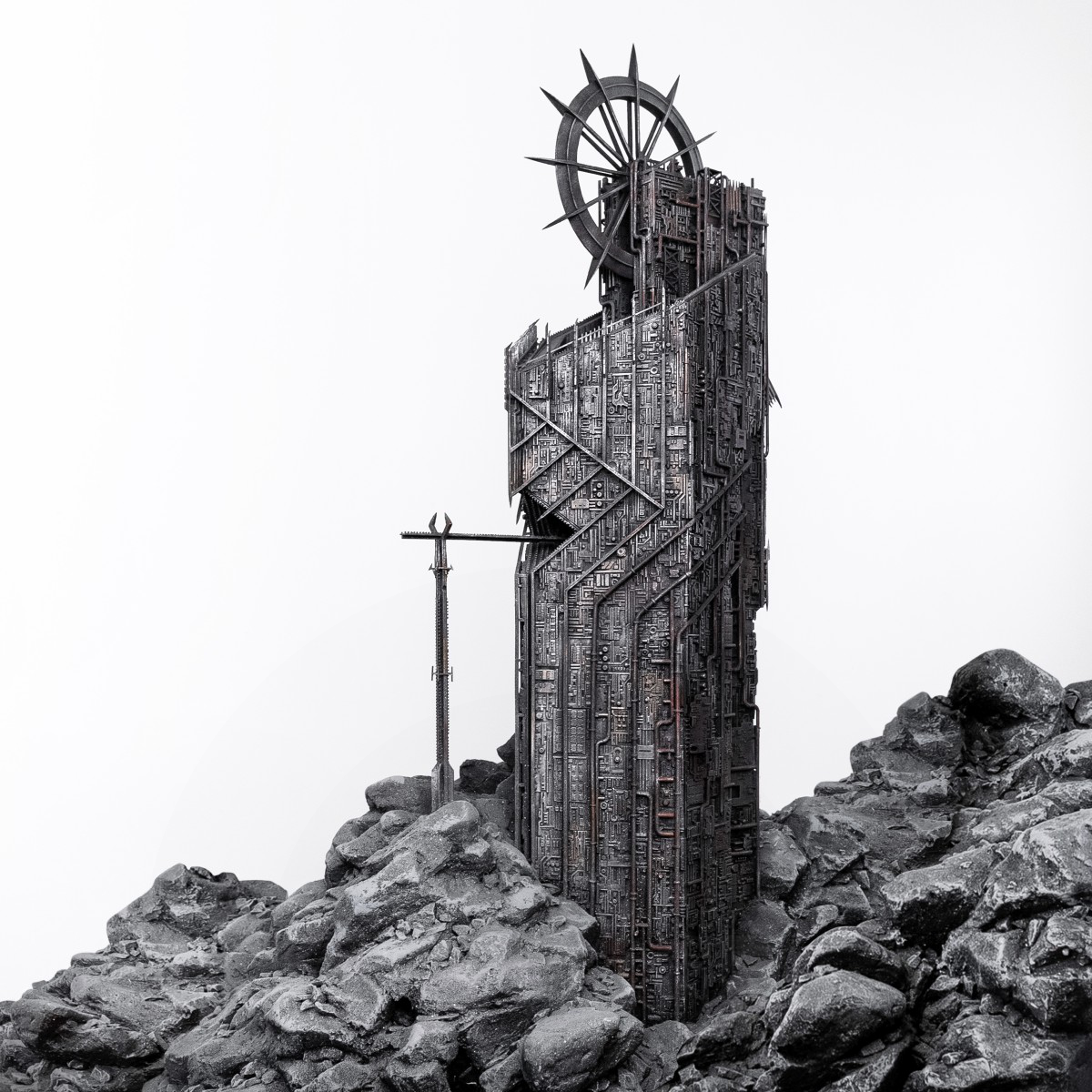 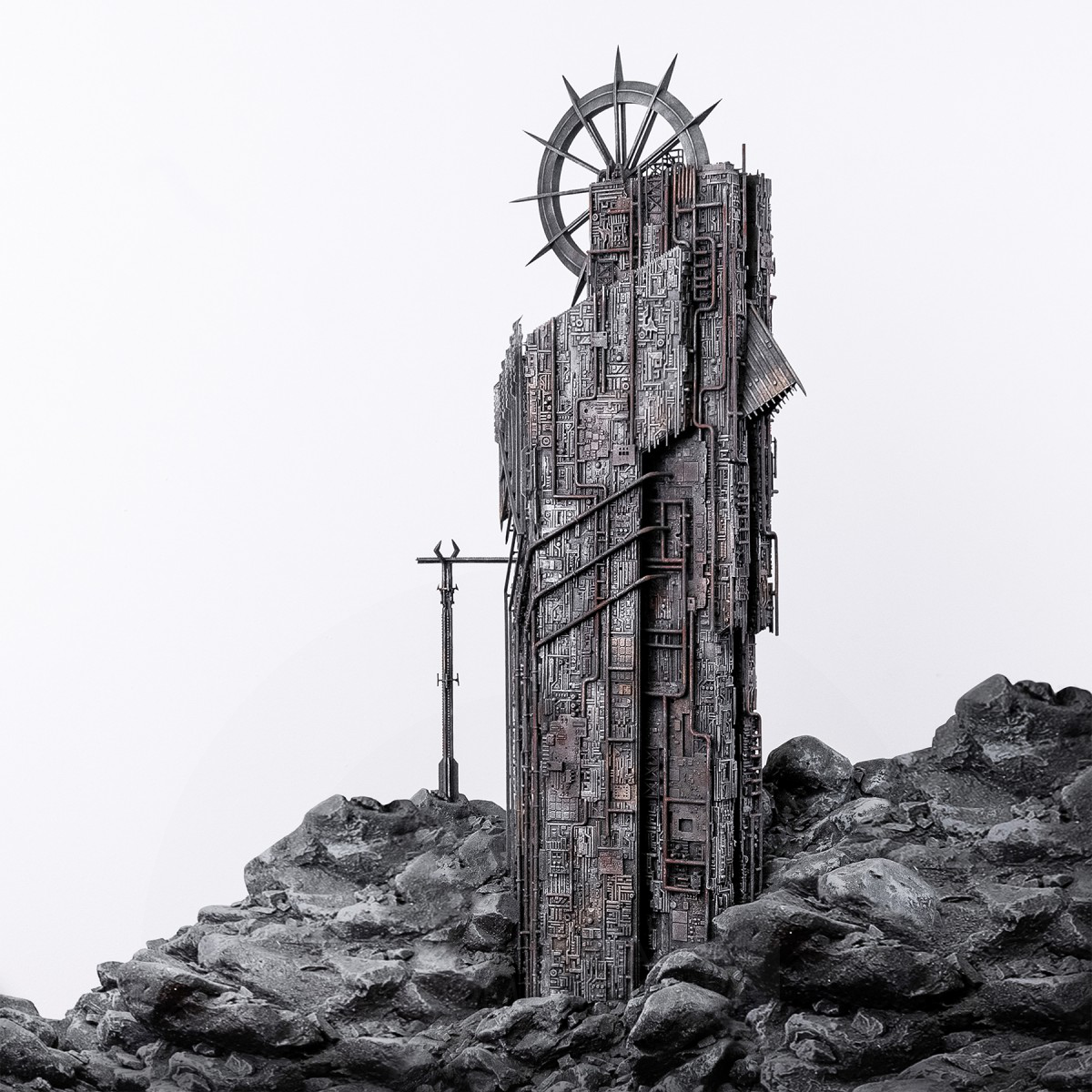 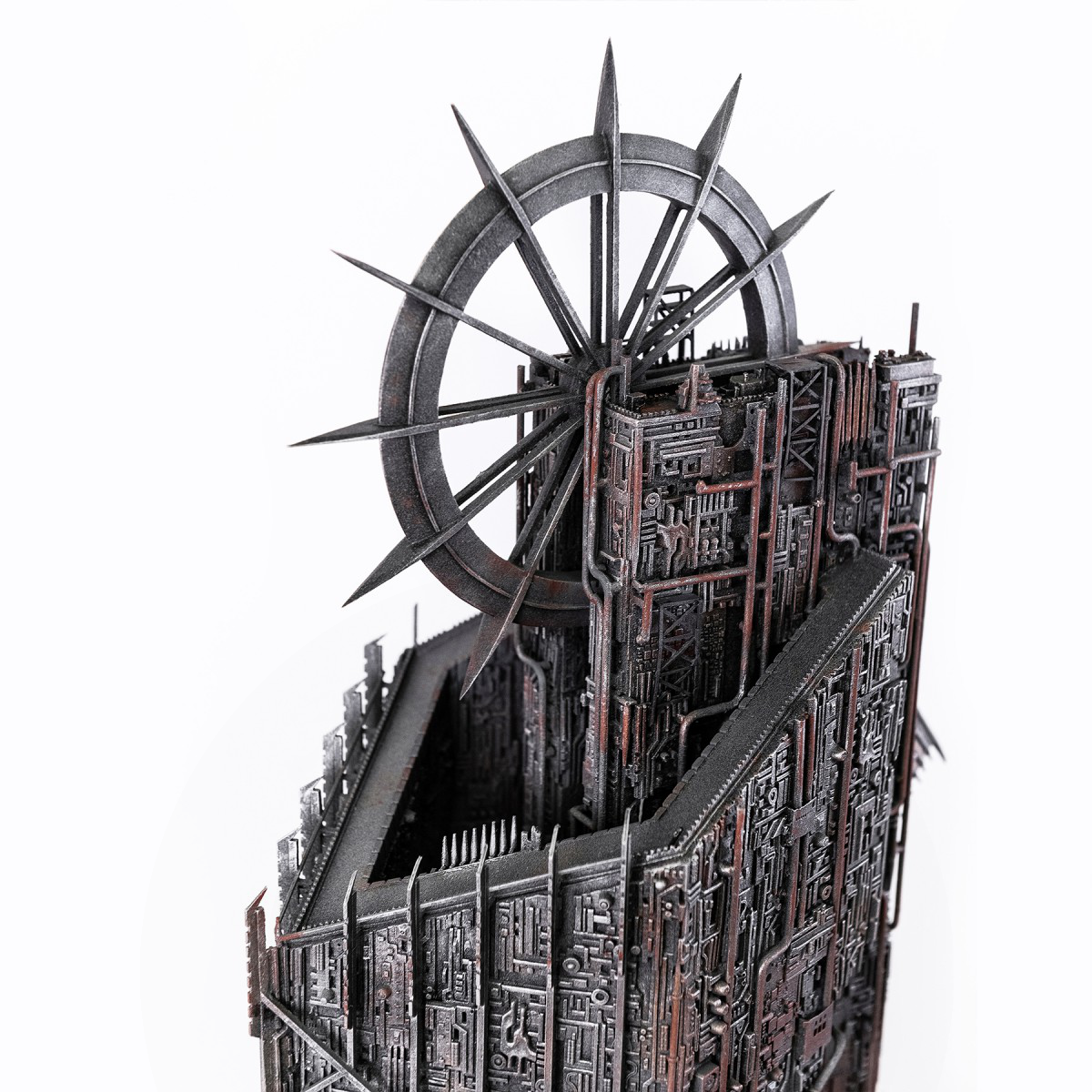 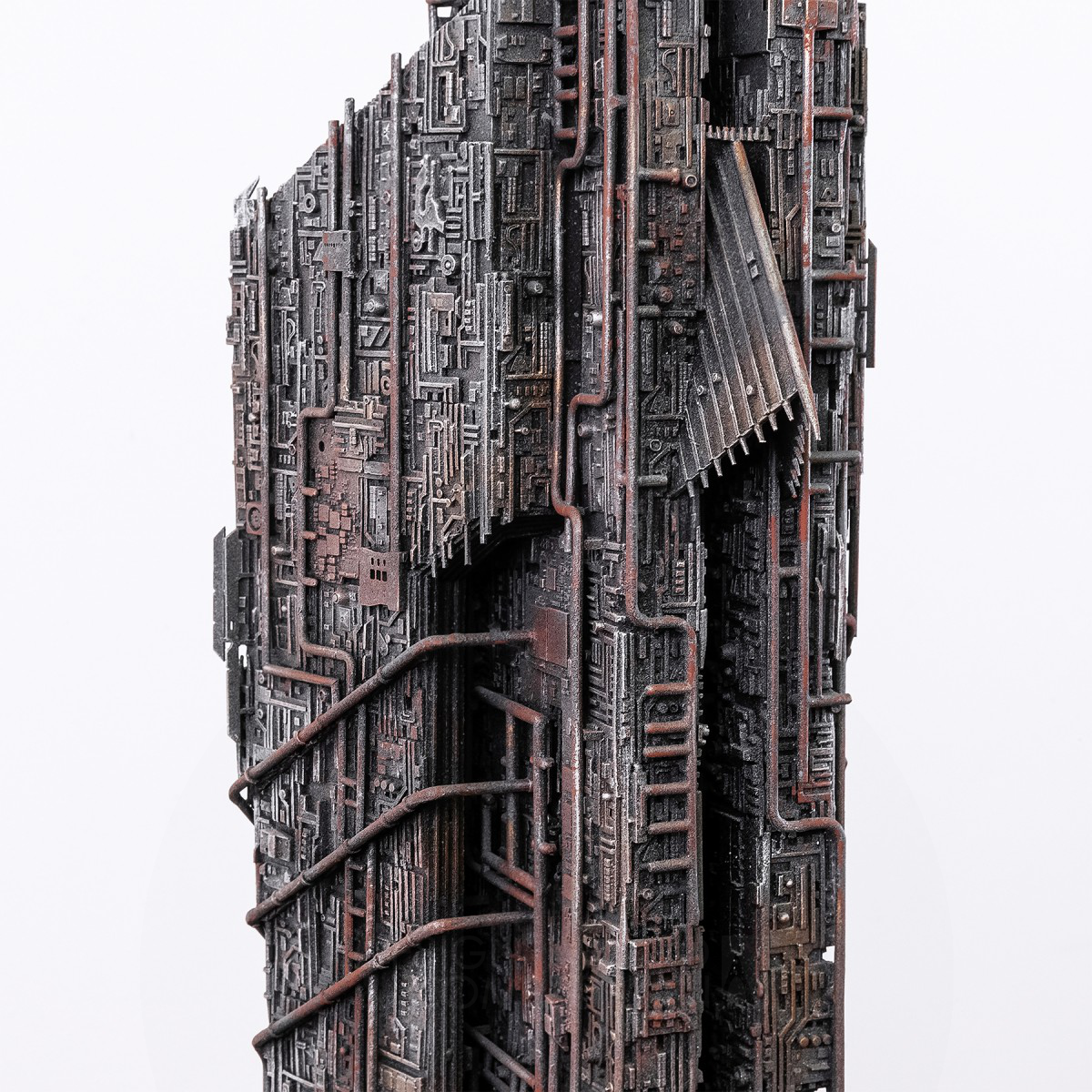 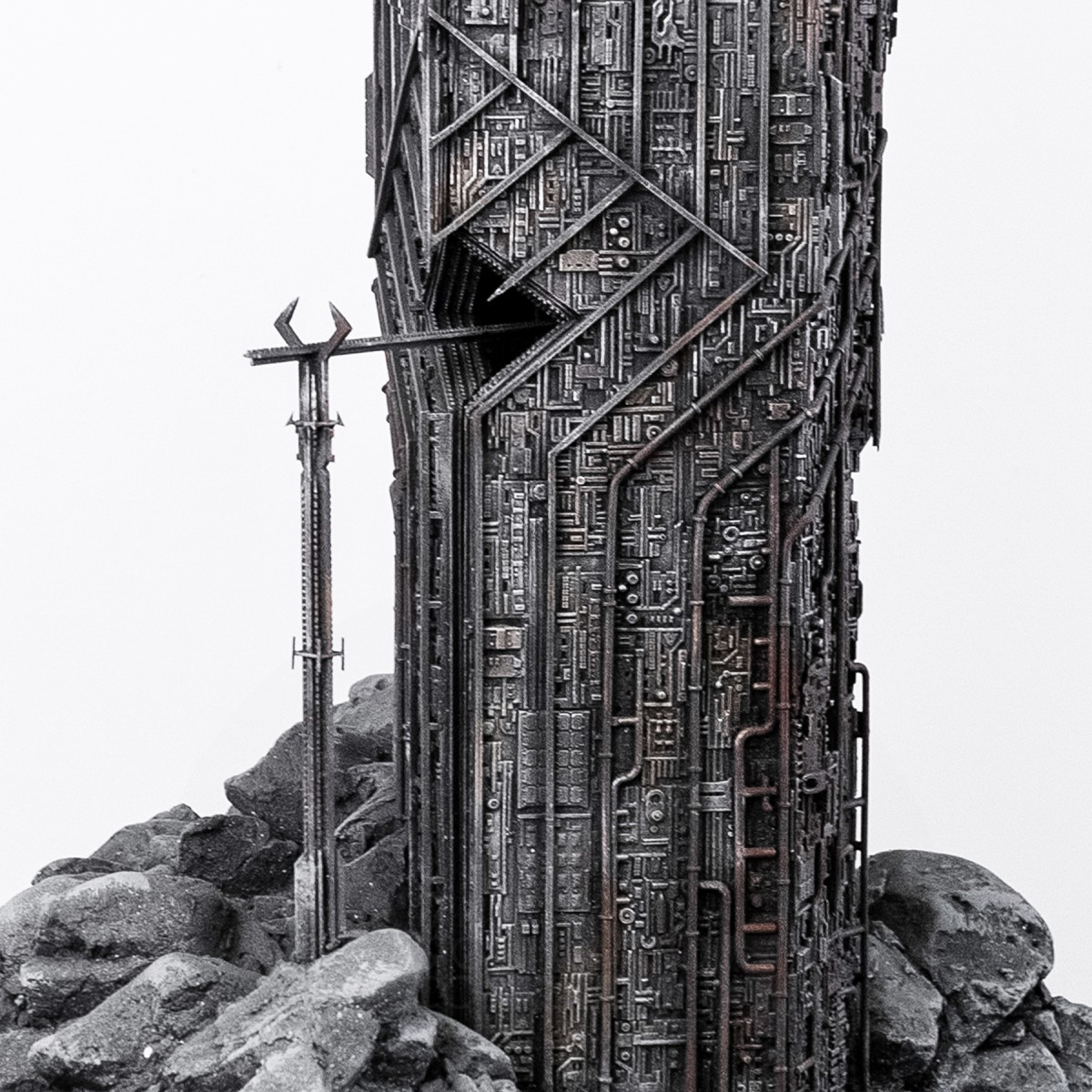 MM : I have always been a big fan of «The Lord of the Rings», and Peter Jackson’s vision of Middle-earth influenced me a lot. In fact, this is a reason why I decided to devote myself to the film industry. I like the fact that they used real-life architectural miniatures for the shooting instead of CG technologies. I am sure that is why the films look so impressive and realistic, so I try to follow this approach in my work.

MM : The idea was to create an architectural form that would match the style of LOTR, but also have my personal touches. In other words, my goal was to take the existing Middle-earth appearance and push it a little forward.

MM : I haven’t got any particular planes for this work, I assume it looks perfectly as a part of my apartment interior. But if it is a chance to make a combined shooting with this miniature (for a film or video), I will be on board.

MM : The overall appearance of a fortress with a gigantic wheel on the top came to me a couple of years ago, I started making sketches and drafts, consecutively changing and perfecting its form and proportions. When the concept was done, it took us a couple of months to transform the sketches into real-life 3D structure.

MM : This is a non-commercial «just for fun» project. I believe that if you have got a good idea, it is a crime to ignore it.

MM : Since it is a non-profit project, I have no plans concerning production. However, I know that Amazon is currently filming the new LOTR TV series, and I would be proud if my work was involved.

MM : I have graduates as an architect, and I am really interested in different historic and modern styles. We all know that many filmmakers refer to architectural masterpieces of ages past, even while shooting a fantasy movie with the necessity to create a brand-new world. So this theme is extremely relevant.

MM : I gained inspiration from John Howe, Alan Lee and WETA workshop, whose unique style and the highest level of professional skill were performed in the Lord of the Rings trilogy.

MM : In fact, I haven’t seen many other examples of this kind of projects. Nowadays film studios tend to use CG instead of real sets and decorations, and miniatures are primarily used in different museums and exhibitions. If we talk about the design advantages, I would say that due to my architectural education I paid a lot of attention to the functional and constructive aspects of the building. That means not only it looks impressive, but also it is well-organized inside.

MM : Rostrus takes its name from the shape of the gate, which resembles a beak of a varmint (“rostrum” means “beak” in Latin), as if it engluts anyone who dares to enter the Dark Lord's dominion. My friend is a linguist, and she suggested the name.

MM : I think the most remarkable aspect is a high level of detail. You can shoot from a distance of 2 centimetres and it will still look good.

MM : My assistant Kseniya helped a lot. Despite her, I did not involve anyone else.

MM : Although I follow the traditional approach of model making, I use modern technologies a lot. For example, some details were carved with laser, and other were molded and casted with liquid plastic.

MM : During the pre-production research we collected hundreds of behind-the-scenes photos from The Lord of the Rings and original sketches that were created for the film. We also decided to dig a little deeper and find as many LOTR illustrations as possible – I can’t say we actually used any of them, but it is always good to have some additional options to discuss internally.

MM : The main challenge of designing a fantasy architectural landmark is to make it both plausible and impressing. You have to take into consideration the entrenched style and fit in the cultural context of an imaginary universe.

MM : I got an e-mail from a manager with a suggestion to take part in the contest. At that time Rostrus was not ready yet (and surely not published anywhere), I think she could see my previous works somewhere in the net. I thought it would be a great opportunity to show my work to the world’s design community.

MM : The submission deadline was very tough, so I had to make everything swiftly. I learnt some new techniques in order to skip as much routine as possible, so now I am the faster version of myself.