We had the distinct pleasure to interview award winning designer Paolo Demel about their original and creative Sofa design work. Paolo Demel is an award-winning industrial designer, that makes our world a better place with their original sofa works. 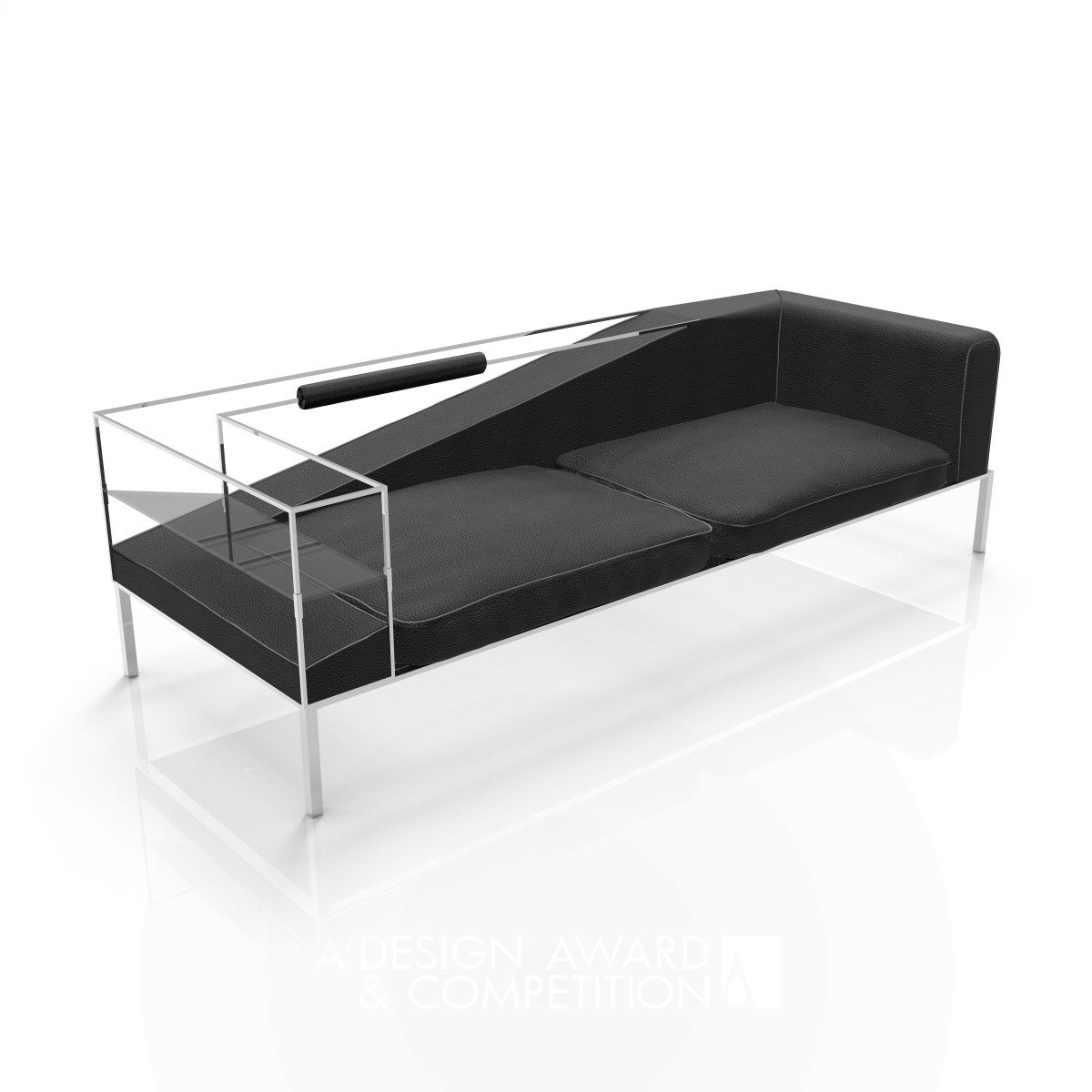 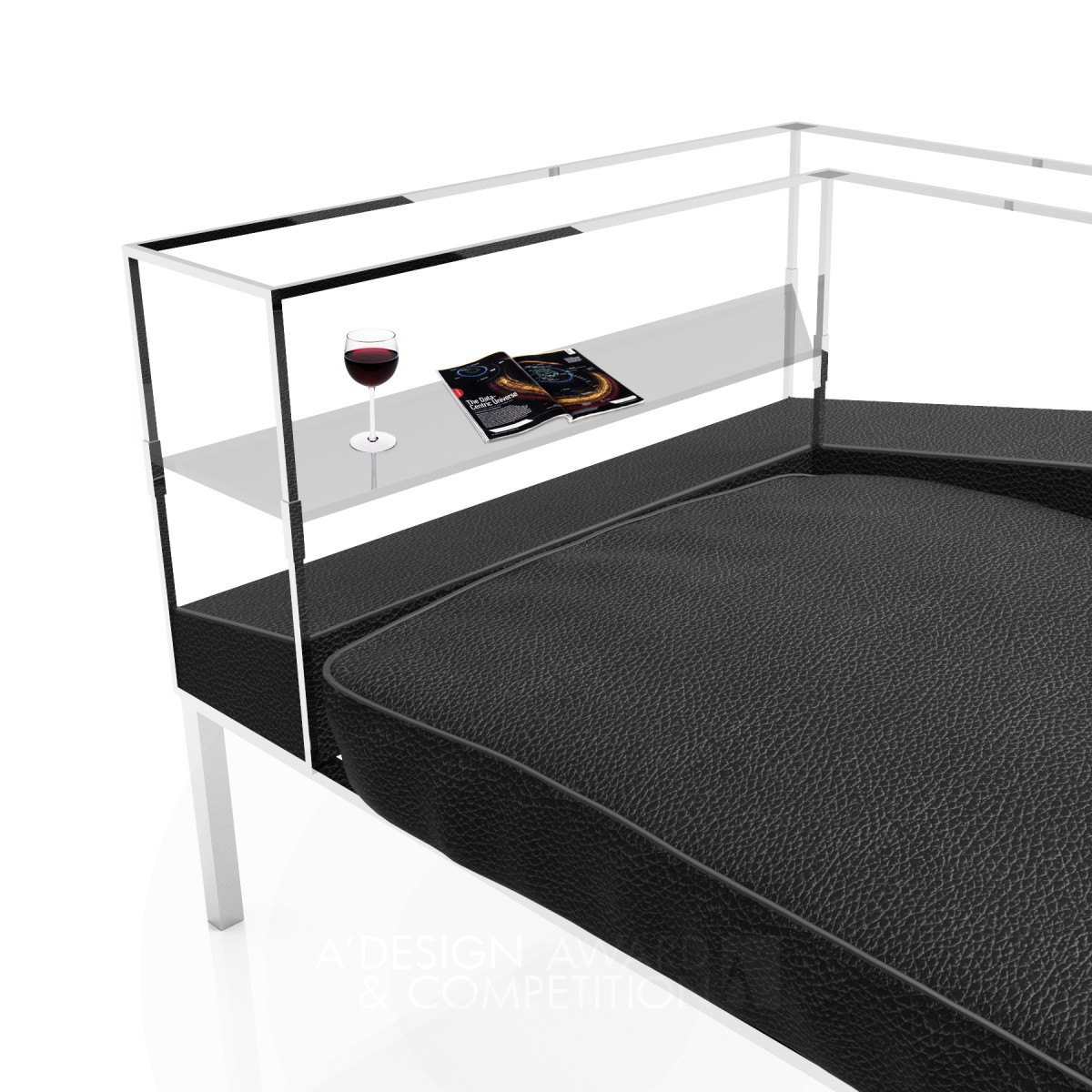 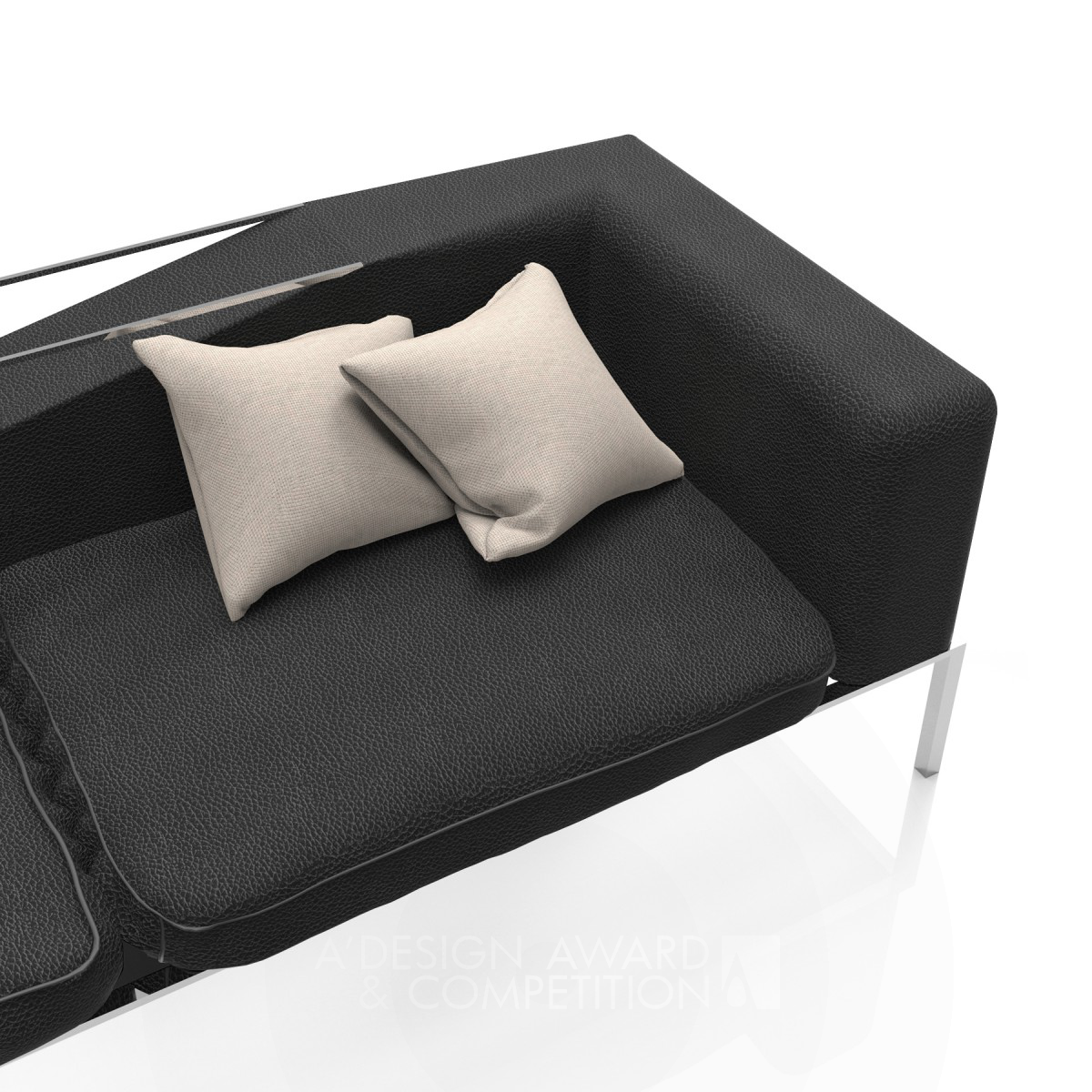 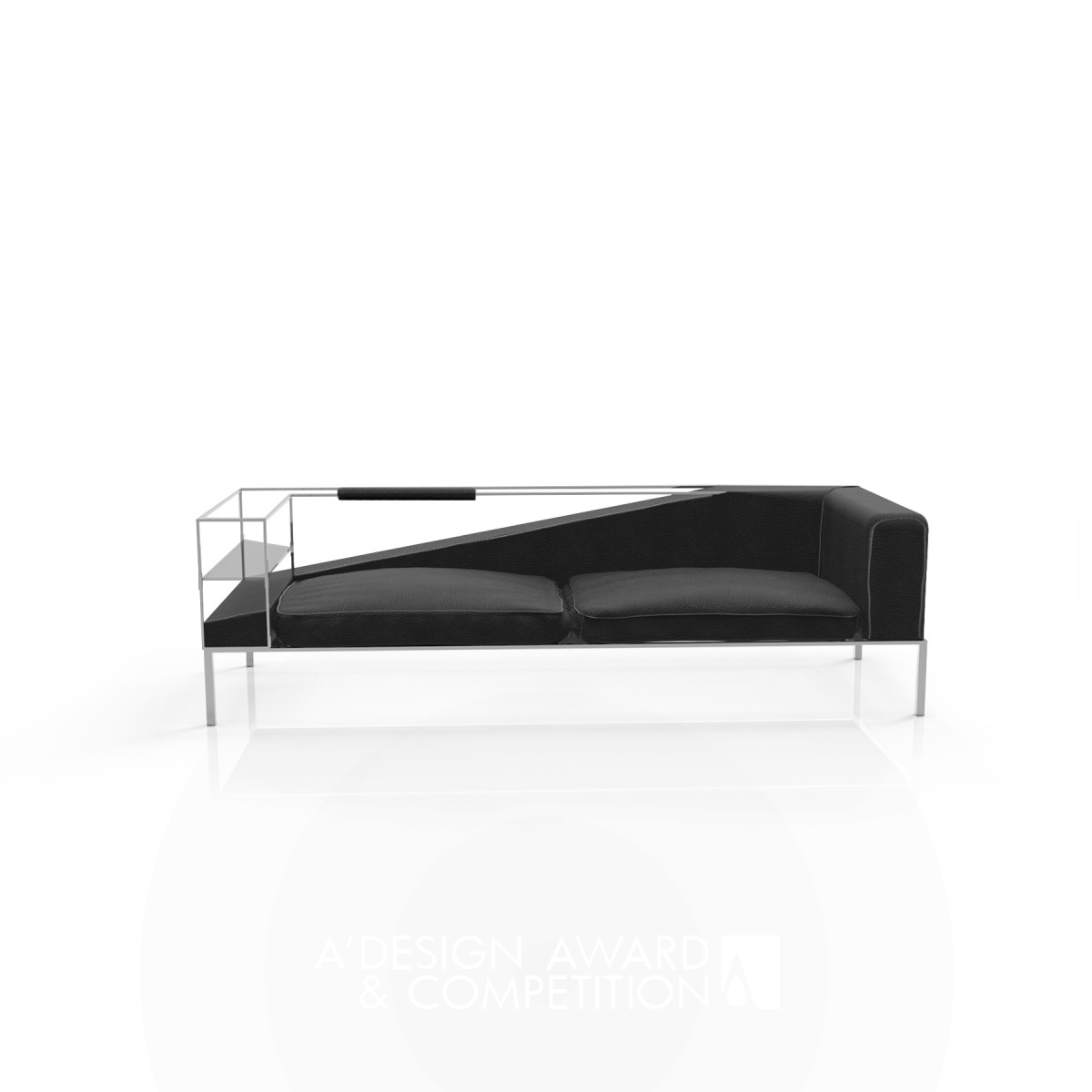 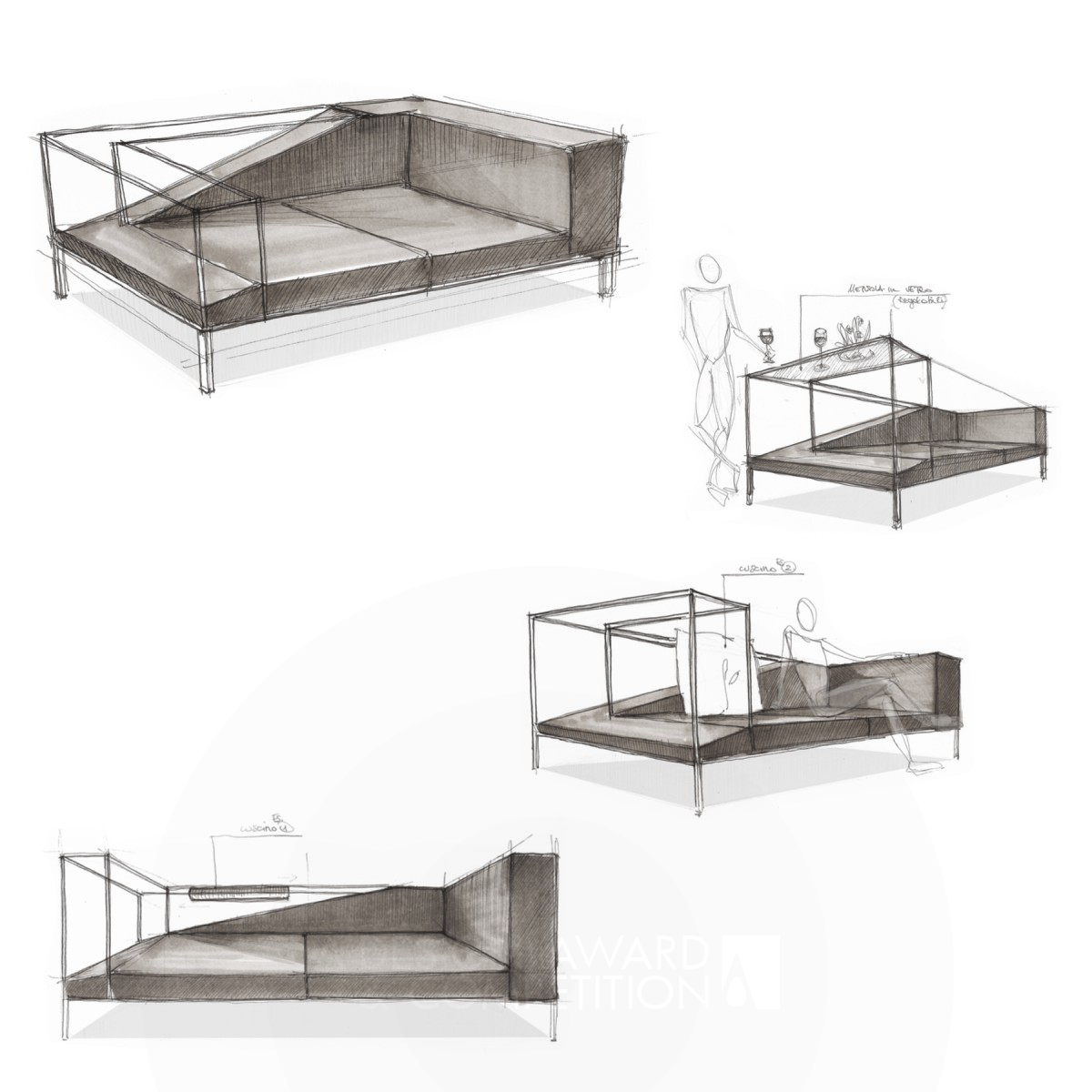 PD : The inspiration for this project was born almost out of nowhere, I was in the office during the lunch break (in my old job the lunch breaks lasted 2 hours so I had a lot of empty time) I wanted to create something of my own. I started making the sofa in 3D, simple and linear, then I thought ... "What if I cut it with a diagonal?" "Why should all sofas have a straight back?" Obviously for convenience, one could answer, but it is not exactly like that, because there is always a solution to everything, even if initially we take the seemingly wrong path.

PD : My goal for this project was to create a design icon, a unique thing, something that had never been seen.I wanted to get exactly the result I got, unfortunately I never had the means to represent it in the best way, but with the means I had available I can be very satisfied.

PD : My biggest dream for this product is that it is made concretely by an interesting company in this sector, precisely because this product is a "concept" and therefore only waits to be made. I hope this project will open the way for me to actually pursue my dream as a designer, I would like to design products for many companies in the sector.

PD : the idea was born in less than 5 minutes. Then it took more time to finish and perfect it, I made several versions before reaching the final shape.

PD : This project was not commissioned by anyone, it is an idea entirely mine and born in my "free time".

PD : My wish is that it be made by a company, currently no company has this project. I do not have the possibility to make it alone on a large scale, for this reason I will definitely have to lean on or collaborate with a company interested in this product.

PD : Since I finished university, I have been interested in the interior designer, so in all the companies I have worked in I have tried to fit in that specific field. For this reason, even when I had free time if I could, I created something of my own during the lunch breaks.

PD : Certainly a designer who influenced me a lot (indirectly) and in particular in this project it could be Le Corbusier, let's say for a matter of the choice of materials, the use of iron tubulars and leather for example, are of great impact for a product, that's why I chose these materials. I am also very attracted to Japanese Design, in particular from Naoto Fukasawa and Tokujin Yoshioka, I highly value them because they are pioneers of a very precise style, and above all they are attentive to cleanliness and innovation.

PD : Surely the target customer for this product is a very careful and sensitive person to the "shape", this sofa is almost a sculpture, for this reason whoever buys it wants to have a particular "piece" in his collection. It could also be an excellent product for a large room or museum, so where multiple people can use it during the day (but always in places of a certain type).

PD : This design is distinguished from the others by the particular shape due to the cut, and by the metal part that goes to redesign the missing part of the sofa. Another great feature is the possibility of adding extra elements on the metal part thanks to the magnets, so there will be the possibility to customize the sofa as you want and to your liking. Obviously also the extra elements will be created especially for this sofa, there will be special cushions with magnets in the back so they can be attached to the structure.

PD : I wanted to give the name of a girl for this project. A girl who was directly linked to this project and who is no longer here. I wanted to participate in this contest because I promised her. "Gloria" is a girl who I met a long time ago and she had become my friend, I had already conceived this project but I wanted to present it to companies to look for a possible manufacturer of my sofa, but I needed some sketches to enrich my project, so I asked this girl to do them for me because she was really good at drawing. So one day I sent her the renders of the sofa and she made the sketches following my computer rendering to the letter (they are the same that I have attached to the project of the competition). Some time later she told me that she had to leave for London with her boyfriend Marco, looking for a stable job, she had just graduated from the IUAV in Venice in architecture. On June 12th 2017 Gloria wrote to me "Paolo after tomorrow I'm going back to Italy and I promise you we'll see you so tell me how the sofa project proceeds, and I'll tell you how I am finding myself in London with work" .... On June 14, 2017 the news on TG "the 24-story skyscraper Grenfell Tower in London caught fire in the night" ... she was there, and she was on the 23rd floor. Gloria Trevisan died that night with her boyfriend Marco, and they were two splendid and full of hope people, I suffered a lot, and just two days before it happened she made me a promise. On the day of her funeral I made her a promise, that is I would have brought this project to the end ... this is the meaning of the name of my project.

PD : For this project I used Rhinoceros 3d for modeling, for rendering I used Keyshot. While the drawings were made freehand

PD : The most unique aspects of my design are: the shape, the function and the history behind the name of my design

PD : For this project I did not initially collaborate with anyone. A girl helped me make the sketches later, Gloria.

PD : The particular role that this design has is to make a person feel at ease, in the exposed armrest (made of iron tubulars) there is a glass shelf that slides up and down according to your needs, where you can place a glass of wine or a magazine. Even the sofa can meet your needs, thanks to the possibility of moving the various elements with the magnets on the structure.

PD : This project has not been influenced by anything but my mind, I have not done any research to get to the final result.

PD : A big challenge was to make something seemingly "uncomfortable" "comfortable", the idea of ​​applying extra elements to the structure with magnets came to me later, initially I concentrated on the shape and wanted to find a solution to maintain the "beauty" of the shape I had thought of without detracting from comfort.

PD : I decided to participate in this contest because I wanted to change my life and I hope so much to succeed. I also hope to find the right contacts to grow as a Designer. I have never participated in a competition before, and I was also looking for a way to show off my skills. The other reason why I participated is related to the promise I made to Gloria.

PD : When I entered this competition, I uploaded my project and I admit I got a very low score, I think insufficient, but I never lost confidence in myself, the first judge who examined my work a year ago was very critic and showed me all the points to improve, so I got up and tried to do my best. That job was worth more than 4/10 and I knew it ... I believed it to the end. This makes you understand that in life you must never break down, but you must fight ... always. And that judge will always thank him.

PD : I wanted to thank the team that works with "A Design Award Competition", real professionals in the sector. They have always followed and supported me with professionalism and patience. In particular Laura, who has always been available and serious in her work, always showing me the right way. This project is vital for me and they all made it a reality.