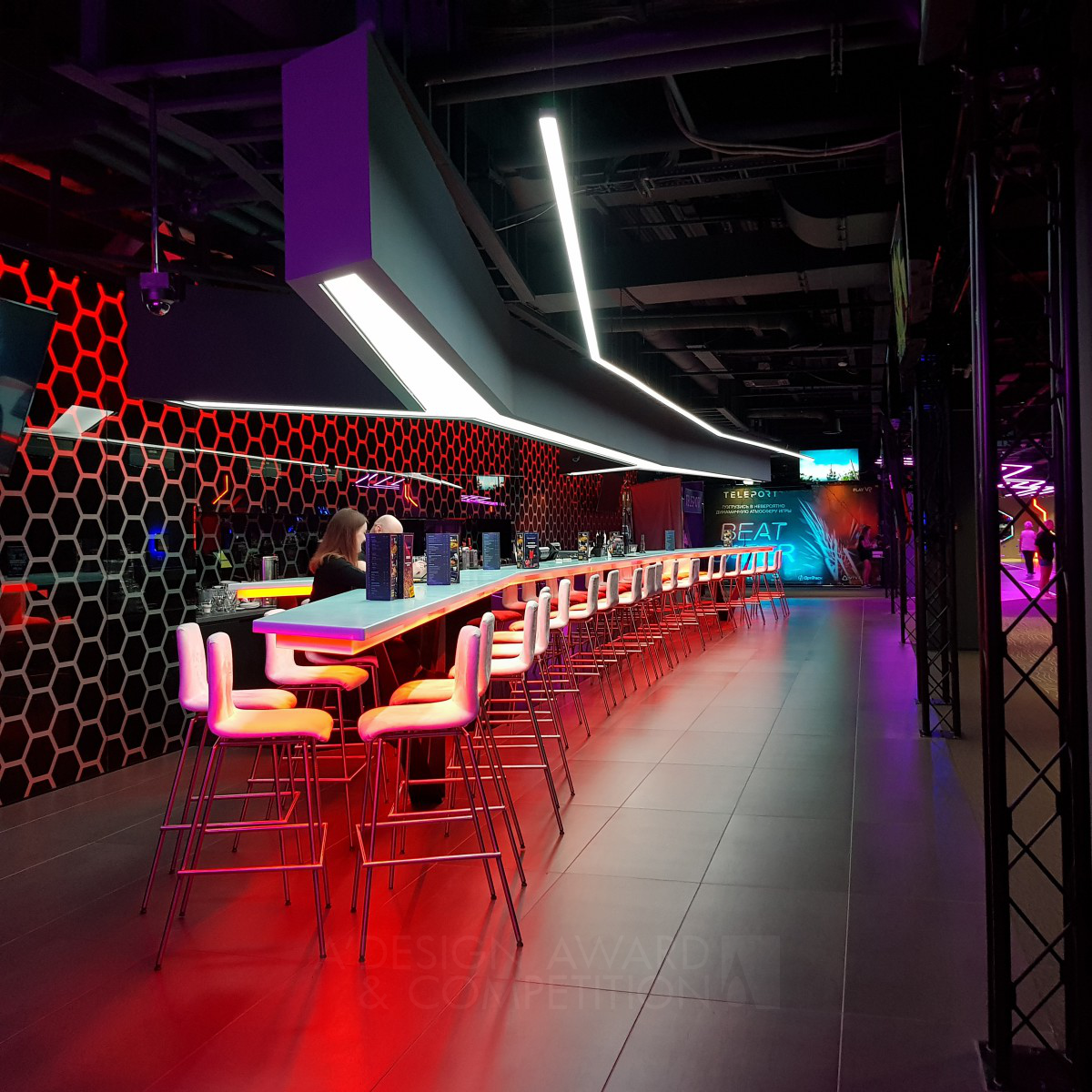 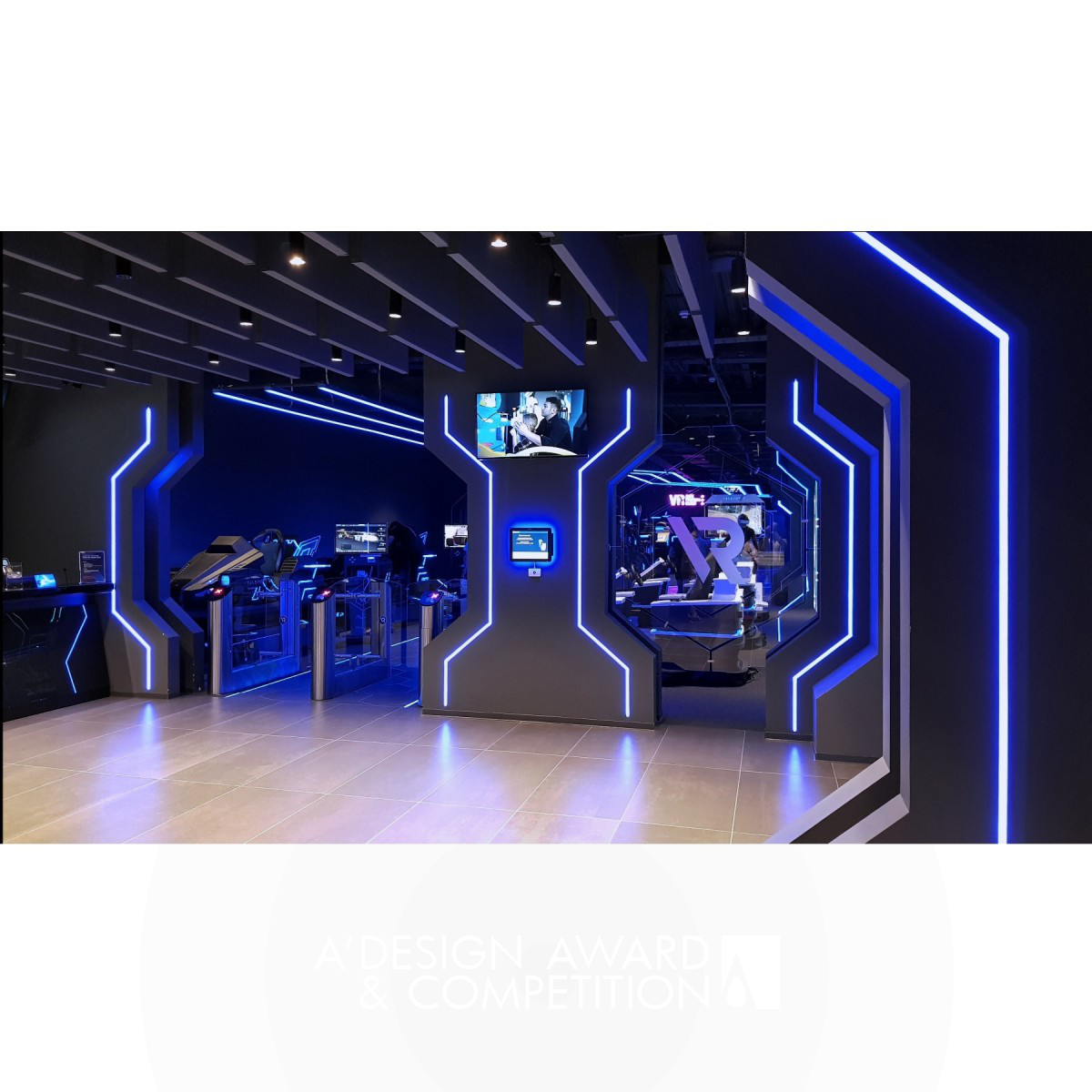 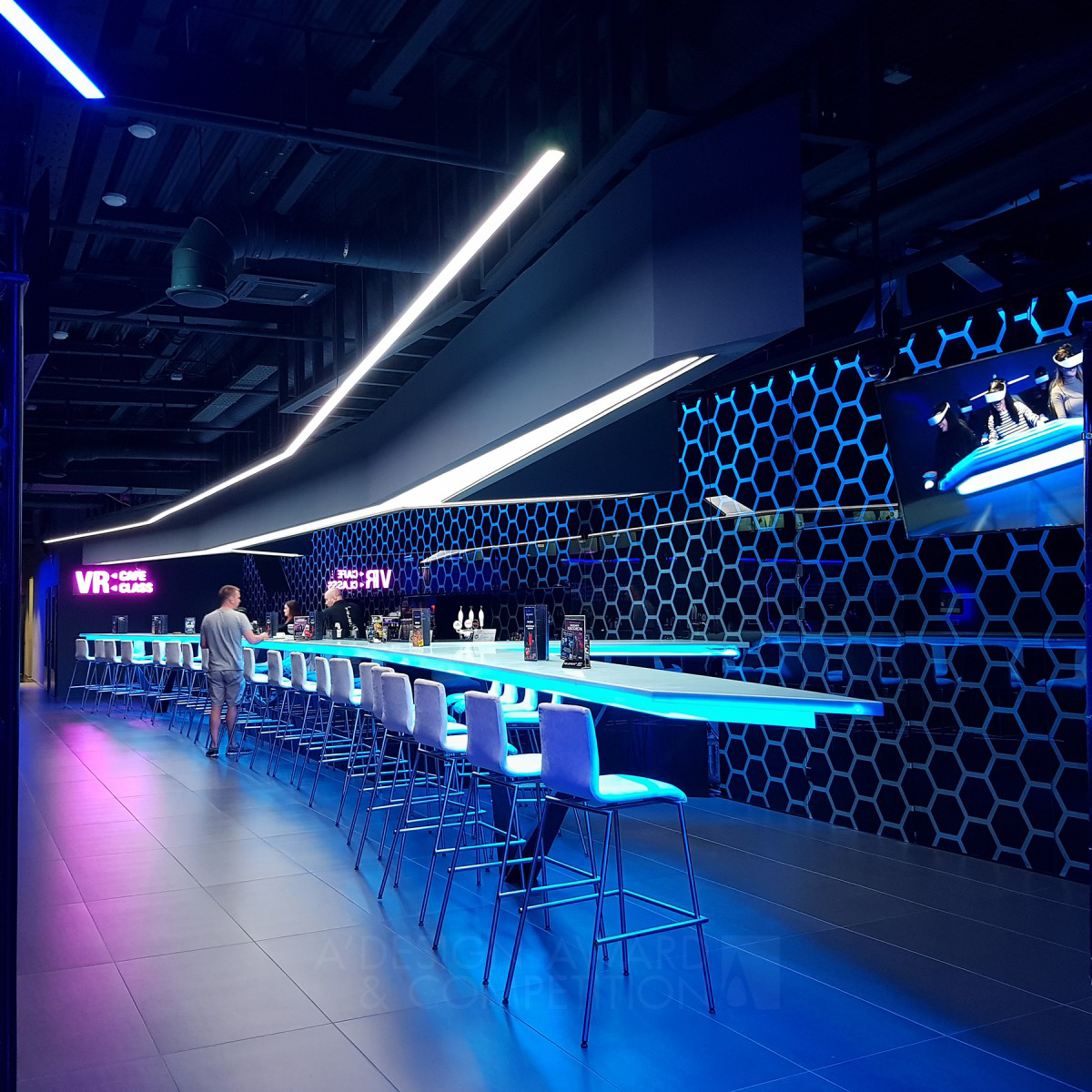 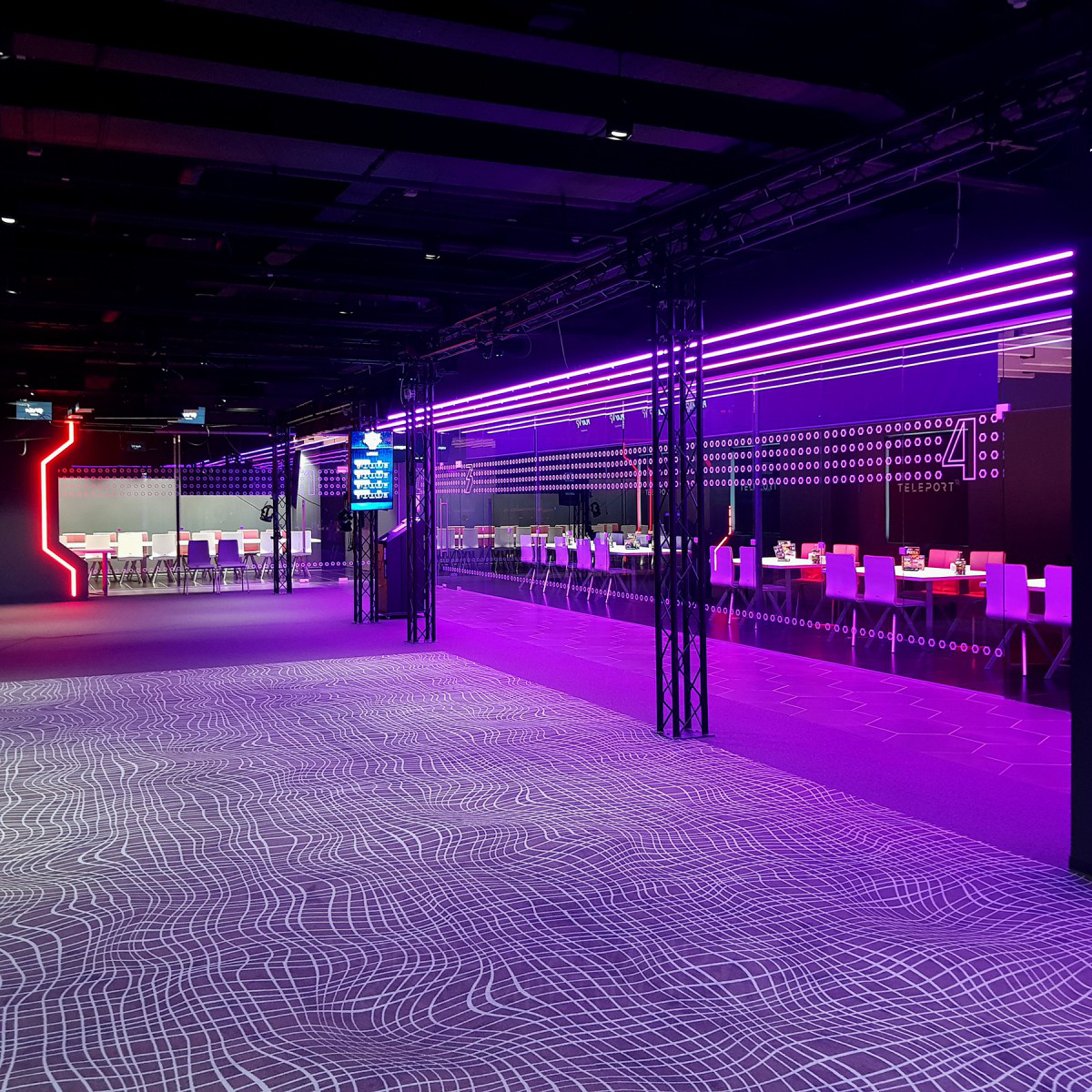 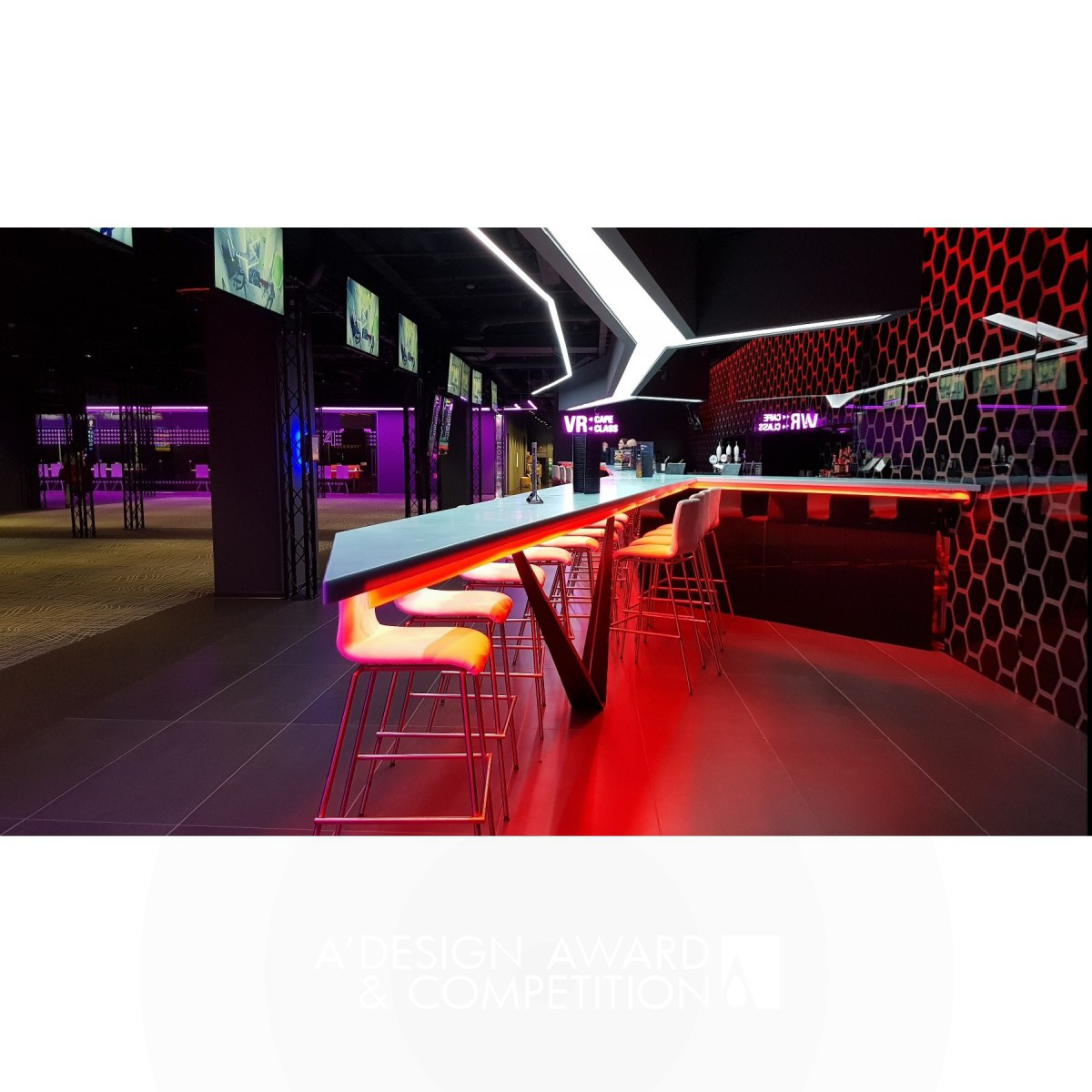 MK : The main idea was to provide some unfamiliar environment influenced by science fiction movies. The base element for this design was hexagon – symbol of virtual reality.

MK : We want to create a futuristic atmosphere of the video game.

MK : This design is quite specific. As this amusement club is first in a network business, we expect to proceed with this interior idea for new locations.

MK : We had only two weeks to create the concept. Than, in one month we provided presentation and renderings for the investor. 5 month later the club was opened for customers.

MK : In the conversation with the client, after we was told about the purpose of this club, we considered about some video game atmosphere. A new film adaptation of the film "Tron" is still on the top. The idea to use the film, and the 2010 film adaptation, as inspiration arose spontaneously during a meeting with the customer, and at the same time was approved by the client and his marketing team.

MK : This design will be produced by us. We don’t have any plans to sell it.

MK : It may seem a little ambitious, but we always want to create some new reality, a new environment, a new lifespace. Not something abstract, but something visibility and tangible.

MK : There were no external influence of other designers, this design was done by our experience.

MK : During the day, the main visitors are families with children. In the evening, teenagers and IT specialists come to the club. Corporate events are very popular there. As the client told us, even the crown Prince from the United Arab Emirates visited this club, he was impressed and spent several days there.

MK : There are not so much similar concepts existing, but the solution quality (and the built quality as well) is the first major advantage by our opinion.

MK : Since it was interior for the commercial amusement park we don’t have some specified name for this and it's called Vr club. And original brand name and logo “Teleport” was creation of the famous belorussian designer Vladimir Tsesler.

MK : Definitely it is a bar desk with “wings”.

MK : It was the most difficult part of the job, in particular, for the production of the bar desk, 5 manufacturers were needed. All of them had to give the correct instructions, so that all the details would form a single structure, and even with the technological equipment and engineering networks inside. Also, a big part of this design was our work with the electrician engineer, so that all ideas with lights were implemented correctly. Our constant presence at the site and complete detailed drawings were the key to success.

MK : This construction was not the result of any analytical research. The ideas and planning were based on our and the client's experience. Virtual reality is a completely new story for our region, we were to study what types of materials can be used in the immediate vicinity of the motion capture cameras of VR Polygon, will not interfere with the lighting, glare from glazing and so on.

MK : We had a lot of issues with combining and synchronizing lighting. Power and color characteristics of LEDs, all this wiring and hidden units. It was really hard to manage and to receive the result that suits to our and client’s expectations.

MK : We were advised by our colleagues from UK. Like this award is a highly respected competition in the world.

MK : Now we are convinced, that our idea could be realized, we have enough skills and experience to make our design happen. Previously, we often rejected ideas without even showing them to the customer, because we thought the design was too complex or too expensive, fearing that the ideas will not be implemented, or worse, will be simplified to an unacceptable form. So tight schedule for this design just didn’t let us to have some doubts or to find any compromise or simplification.

MK : We would like to note that such a successful situation is extremely rare in our practice. When the customer fully trusts the designer and relies on their experience, allowing the project to be completed without compromise.