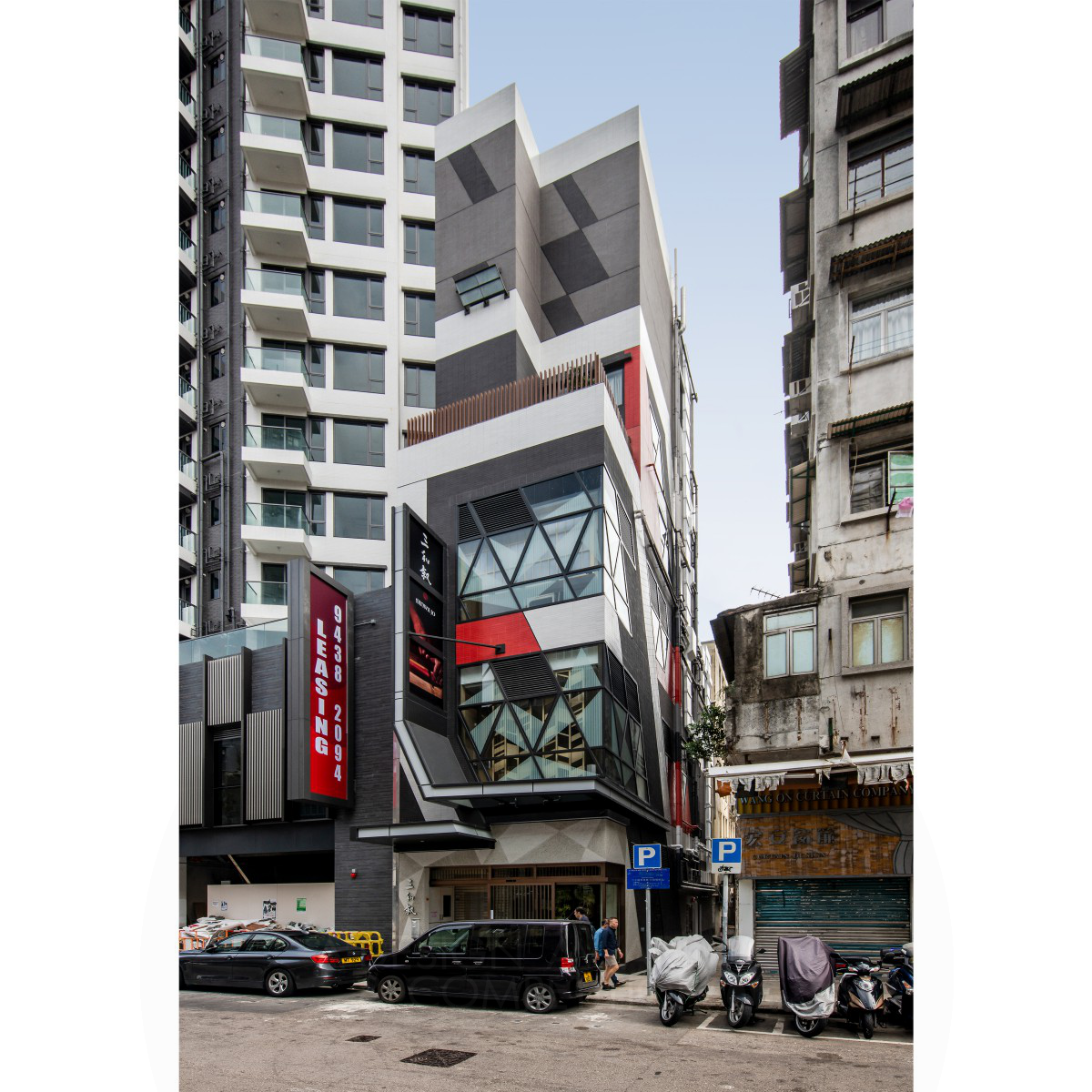 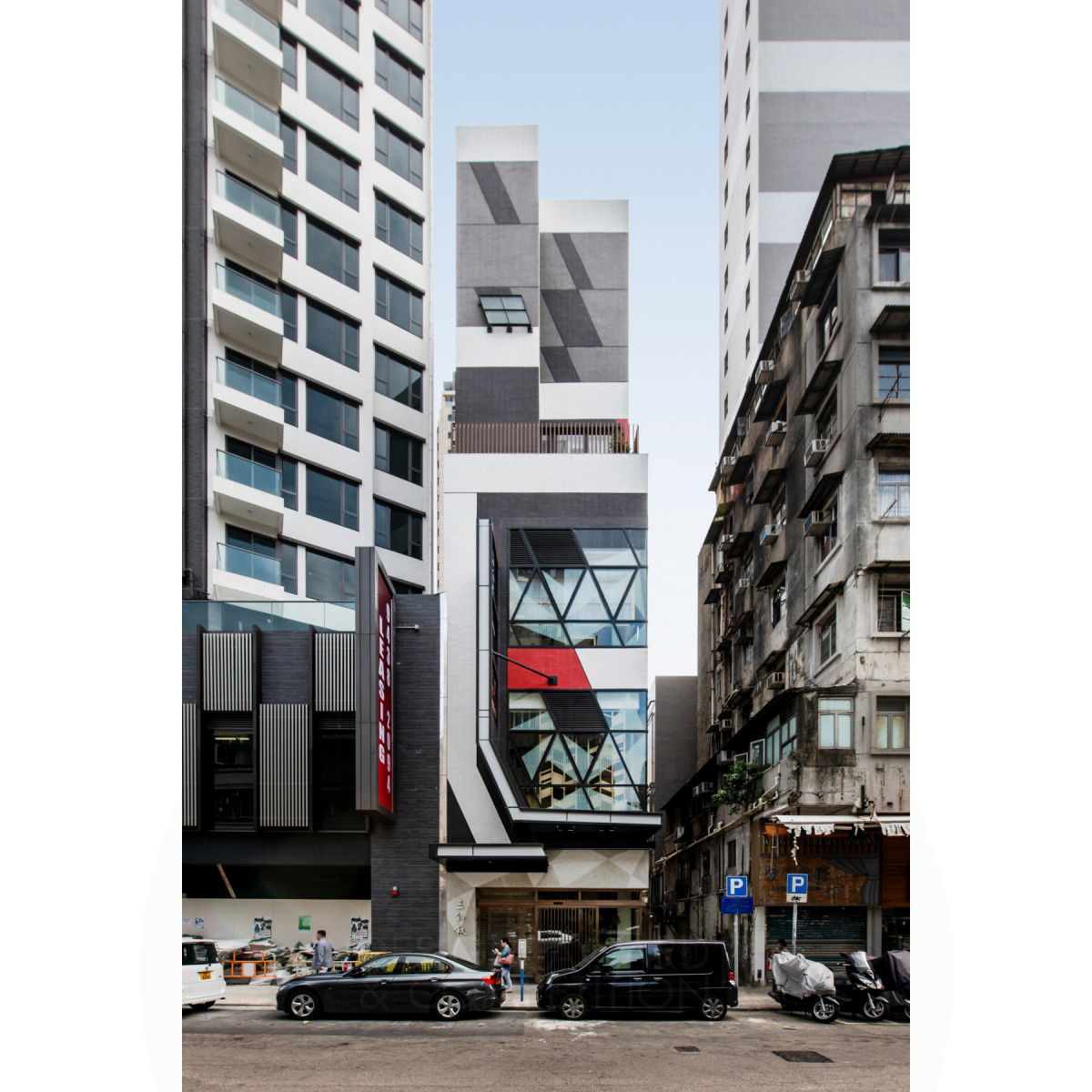 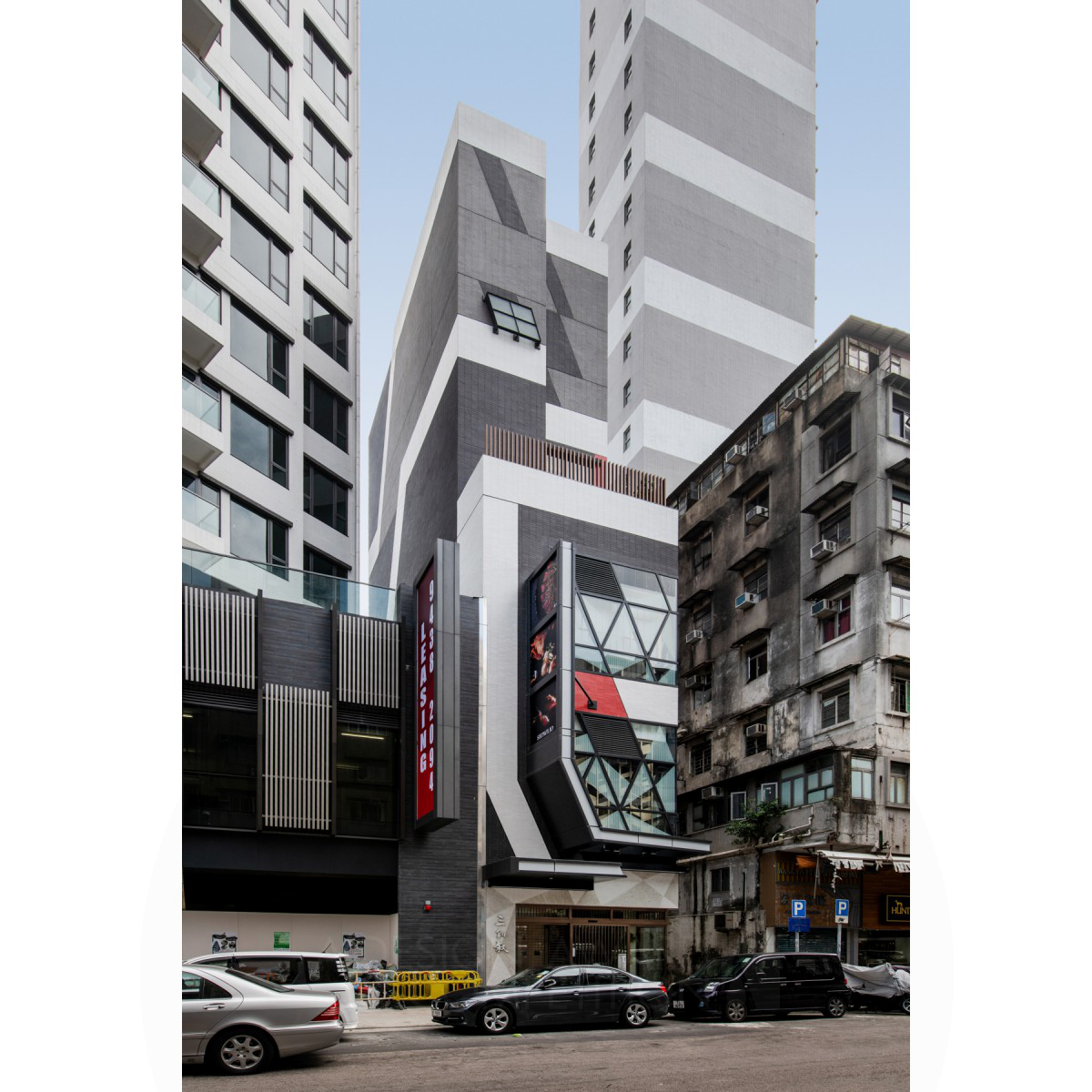 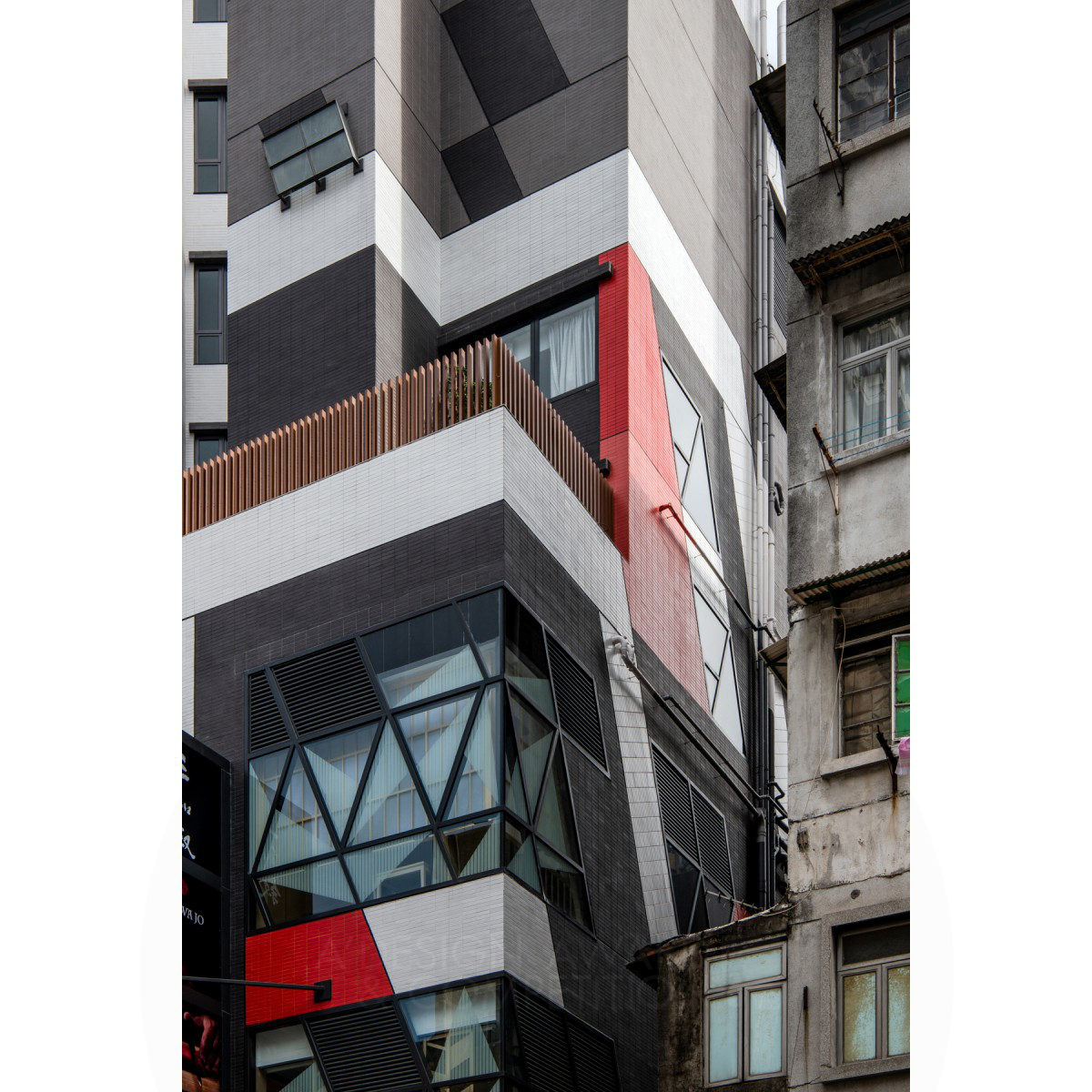 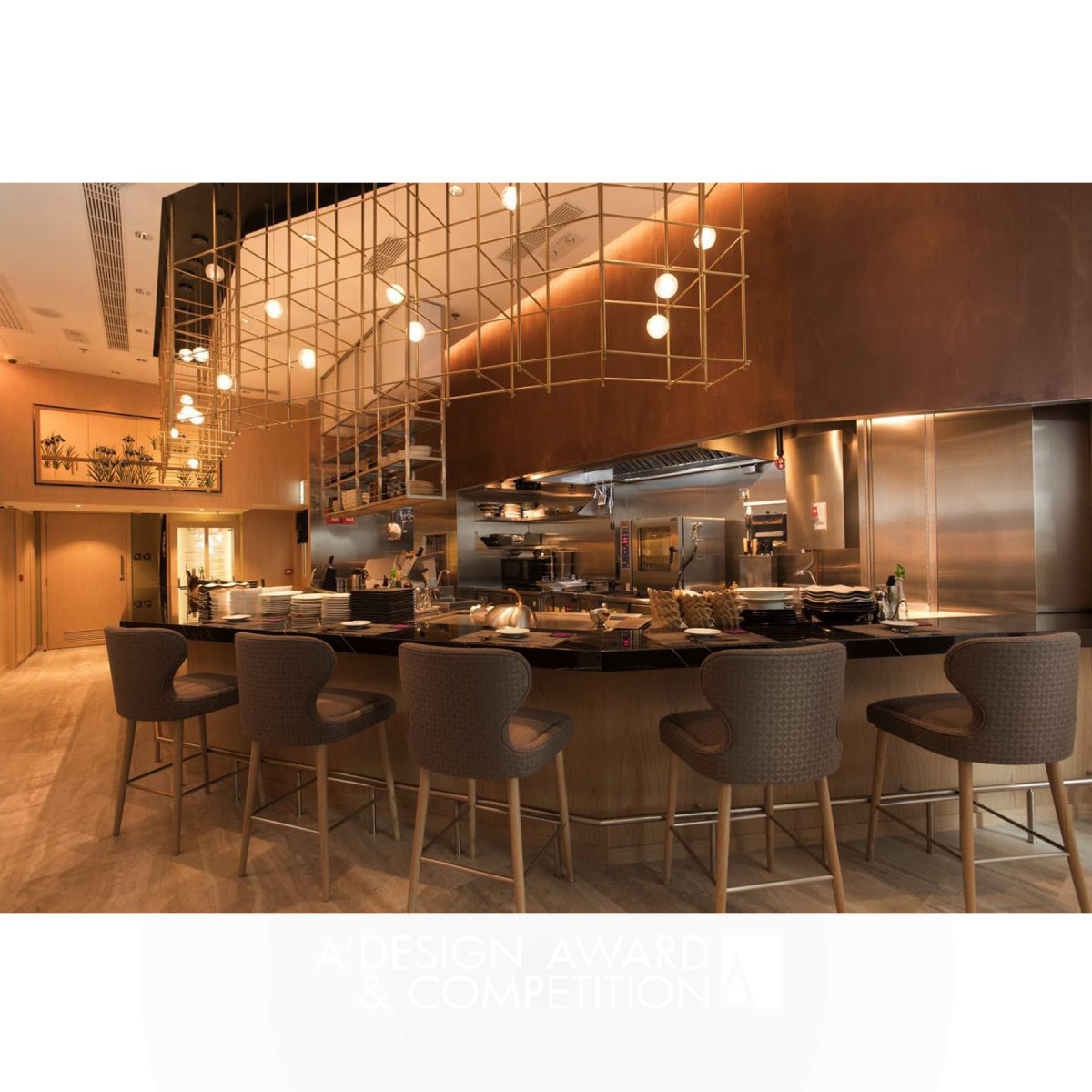 SVC : For many, the infamous Kowloon Walled city is an exemplar of the spirit of Hong Kong, where people worked together to resolve local issues without assistance from the authorities. This cooperative spirit was cultivated within the former Walled city. This spirit has a special place in many Hong Konger's minds, with the passing of time, the collective memory will vanish. The design is hoping to capture and evoke elements of past memories.

SVC : The focus was to make an awkwardly shaped building volume looked aesthetically eye-catching within an old neighborhood. The triangular operable window has met considerable technical challenge during the design and manufacturing process. We researched local history and the aesthetics of former infamous Kowloon Walled City not far from the area and applied onto the facade design. We wanted to evoke the memory of the low to mid-rise housing in this area, as this area is currently demolishing the old building to make way for new residential high-rise towers. The height restriction has been lifted since the Kai Tak airport has been decommissioned.

SVC : Our responsibility is completed and discharged at the conclusion of the project. The client is pleased with the design.

SVC : This concept took about 2-3 months with design changes following client approval. The planning, layout of space and engineering advise takes much longer due to the strict regulations. It has taken nearly 6-12 months including documentation and convincing the client to go with the triangular and parallelogram shaped windows.

SVC : This particular concept was used because it speaks uniquely about the place, the infamous but fascinating story about Kowloon Walled City that evokes the memory of many locals.

SVC : The building is now fully occupied as an up-market Japanese restaurant and Sake bar.

SVC : The client was one of our regular clients, we have designed several buildings for them. The site was formerly occupied by an electricity substation. The substation was decommissioned and hence the site was available for purchase. The site is rather small and it made it interesting with an alleyway next to it, so I took up the challenge.

SVC : I was fortunate that no other designer was influencing it, other than a small adjustment to the small due to a column that was placed next to the curtain wall at a later stage. We worked around the problem by incorporating the column to blend in with the glass.

SVC : The stylistic approach to elements found in older buildings. Not many other architects have attempted this.

SVC : We gave the name of the building 46 FLT, Kowloon City. FLT is the Cantonese street name: Fuk Lo Tsun, literally the village of the Fujian people. 46 is the street number of the project. The name gets too long so we abbreviated it.

SVC : I research about a particular subject or ideas first and then sketch them out on tracing papers. I test the ideas on SketchUp or Rhino depending on complexity. Documentations are done on Revit. Final renders are done by others on Lumion, 3D Studio Max or VRay.

SVC : Many new developments in Hong Kong wanted to move away from their past, I took a different direction by looking at the past and present it in a contemporary and stylistic manner. Compared to her predecessor, 46 FLT is actually very well built with above average workmanship. This is also because this building will be occupied by the client and it is destined for an upmarket Japanese restaurant for high paying or exclusive customers.

SVC : I collaborated with staff at A.Lead Architects Ltd. Andy Wu gave me a lot of assistance at the planning and documentation stage of the building. While Kentis and Randy, the two Directors were really supportive of my design. The draftspersons helped to draw the technical drawings on CAD software, while I modeled and detailed the building with Sketchup.

SVC : Other than CAD and rendering process that speeded up the design process, the building is just an ordinary building. The lighting, however, were LED lights, while the window frames were of unusual shape, so they had to build a prototype to test the strength before manufacturing it.

SVC : Only historical research into Kowloon Walled City and surroundings.

SVC : The parallelogram and triangulated windows were almost banned due to not the standard windows approved by local Building authority. Hong Kong has a list of approved windows, in order to prevent the contractor from using cheaper alternative or substandard materials. The project managers were really skeptical and nervous about it. It got to a point where it was going to be banned, so we were able to come up with convincing stories and evidence. In the end, the client was really supportive and project managers were convinced. So the odd shaped windows stayed.

SVC : I thought the completed building looks interesting and gave the street a whole new look. So I decided to submit it to the A’Design Award to see how well it fares.

SVC : I constantly test out many different ideas during the design process. The first few concepts didn’t fit with the context, so I keep thinking about what I can use. I then decided to read more into the surroundings for a story rather than site-specific problems. I have learned to fight for my design with the client and the authority, by convince and assured them with some research, precedents and solid evidence.

SVC : I have covered everything.