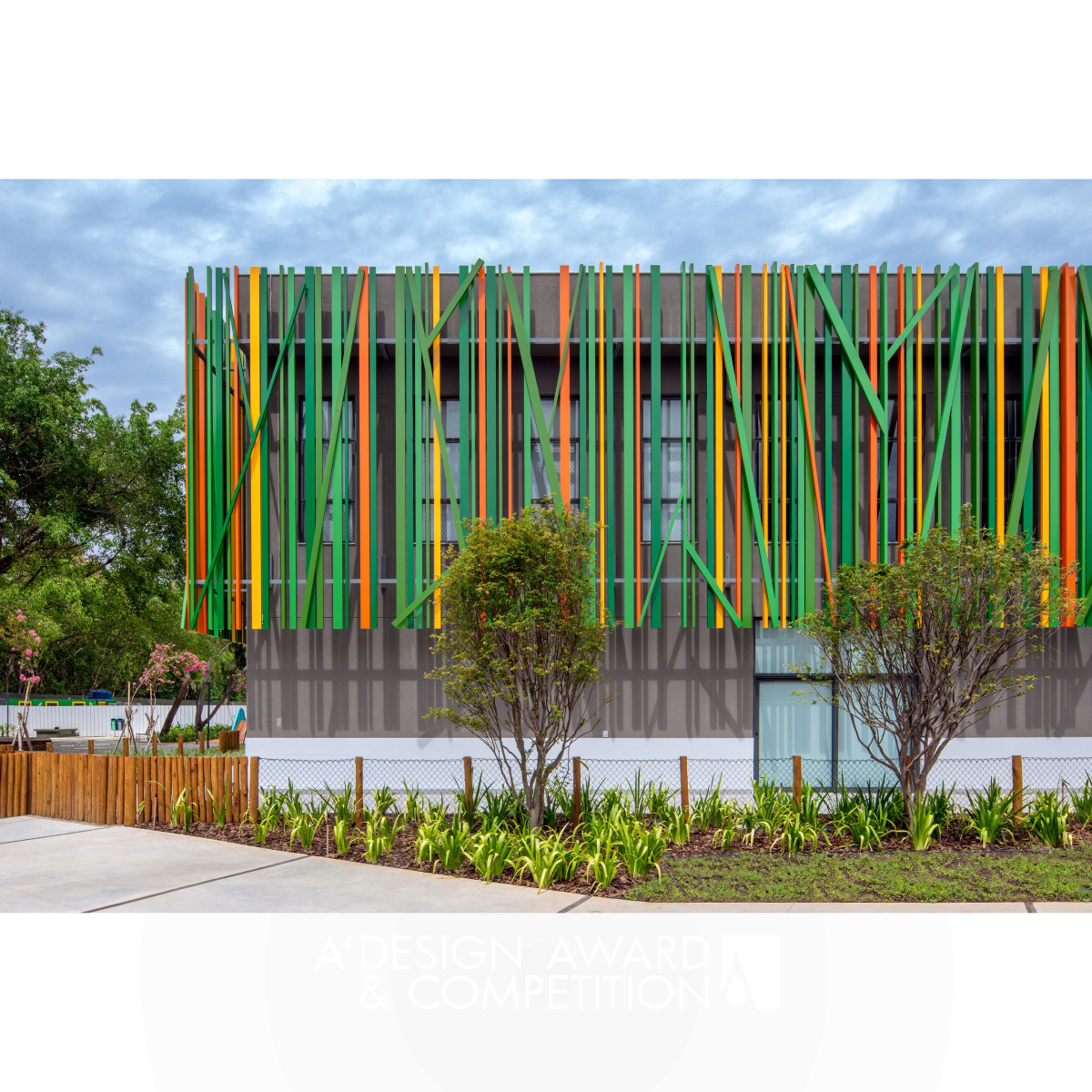 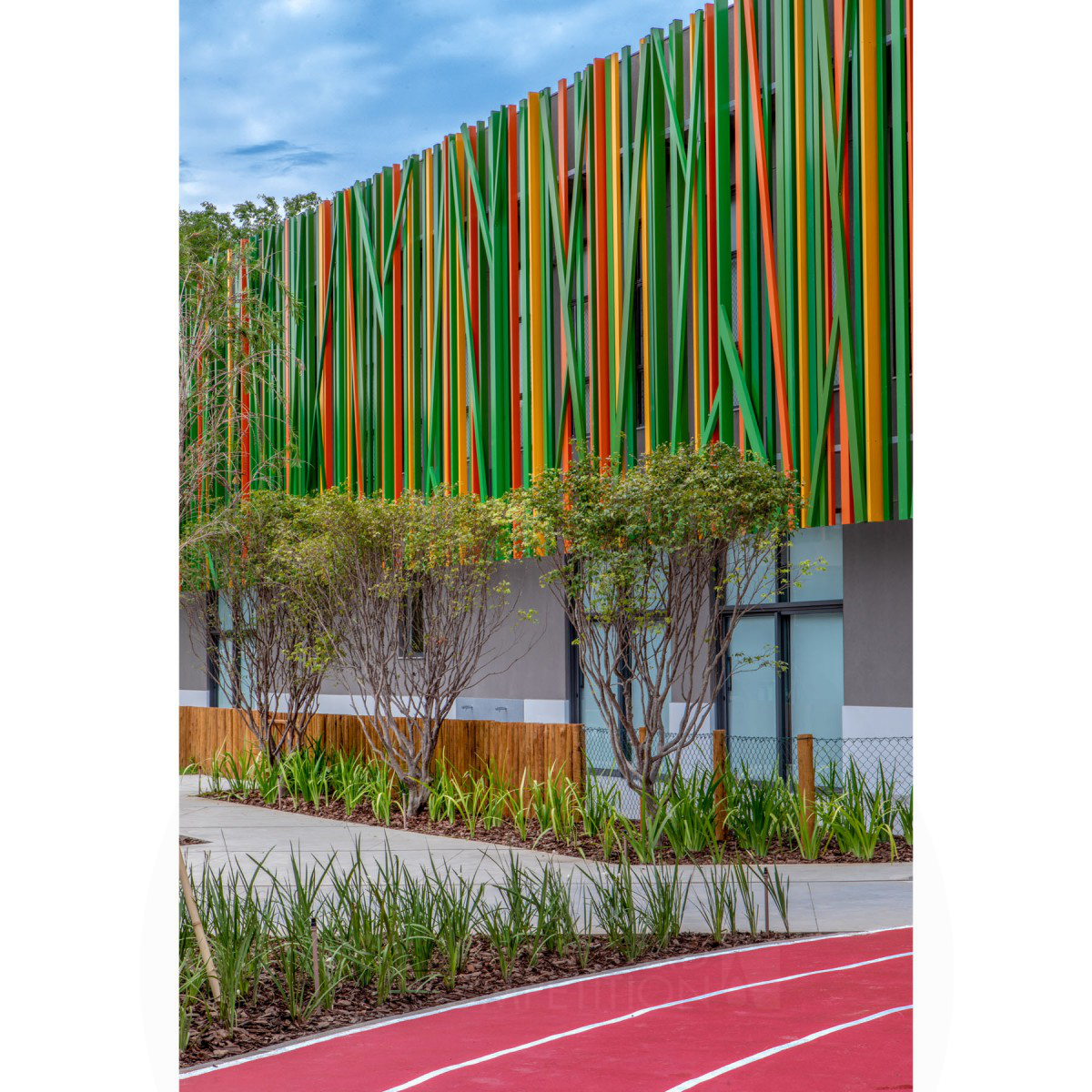 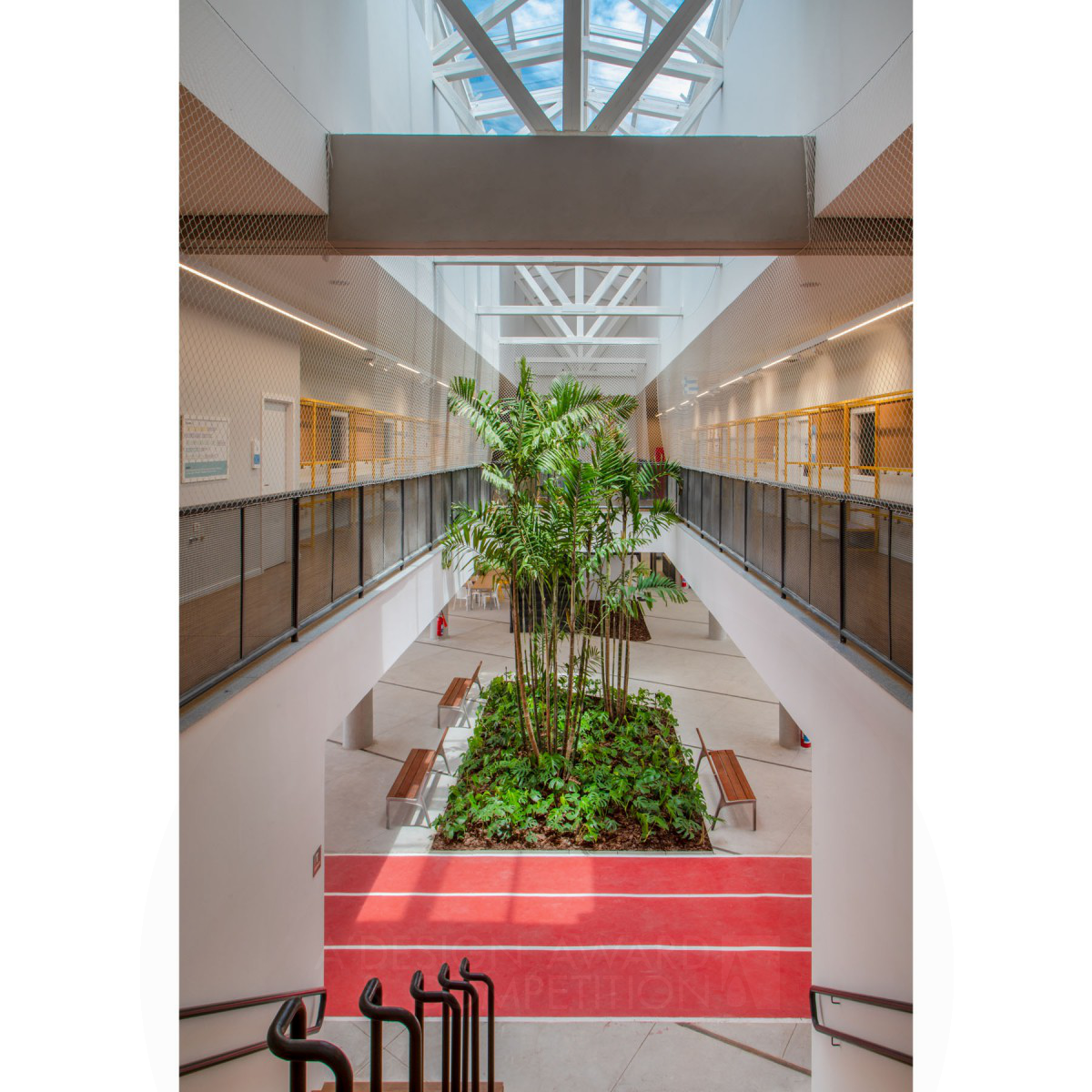 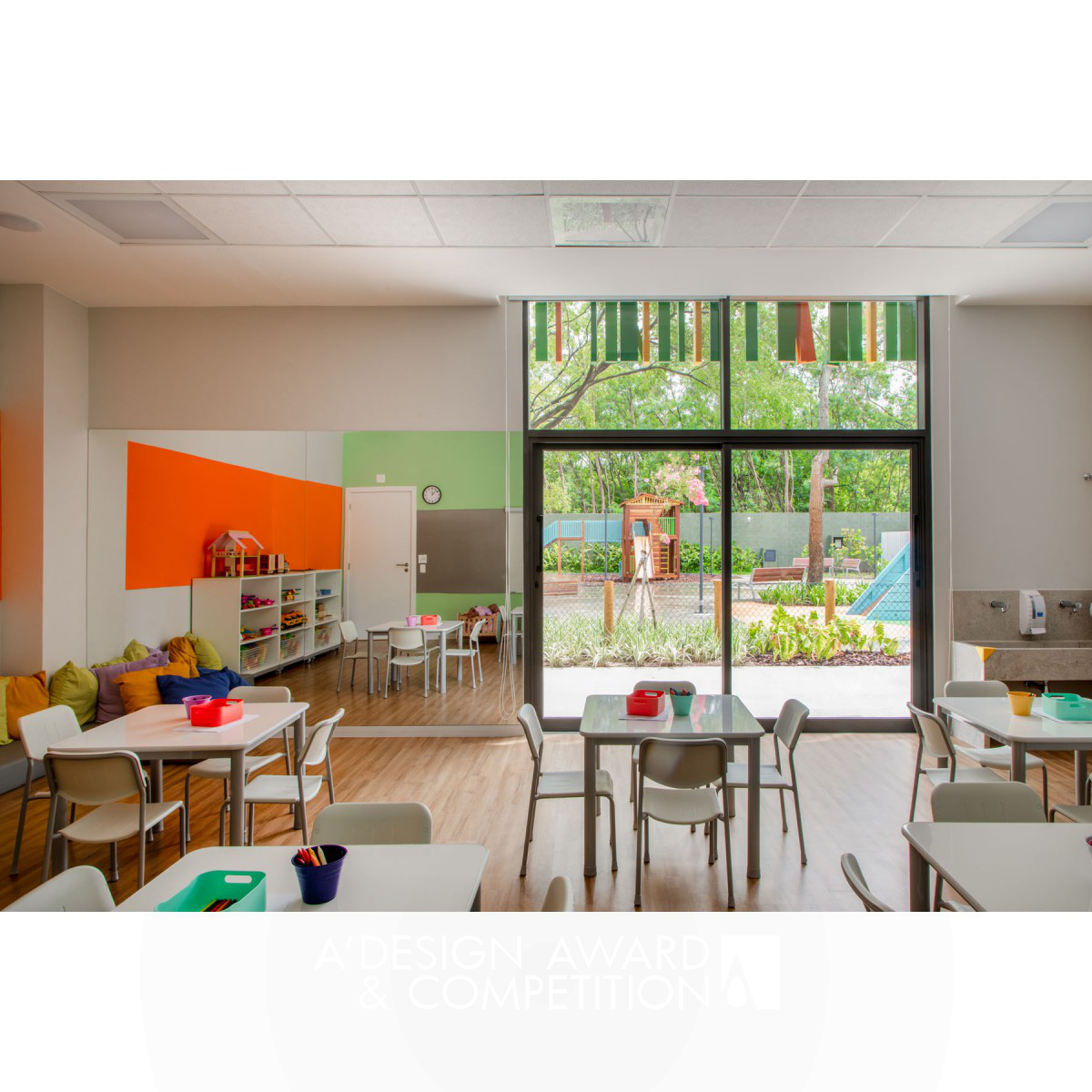 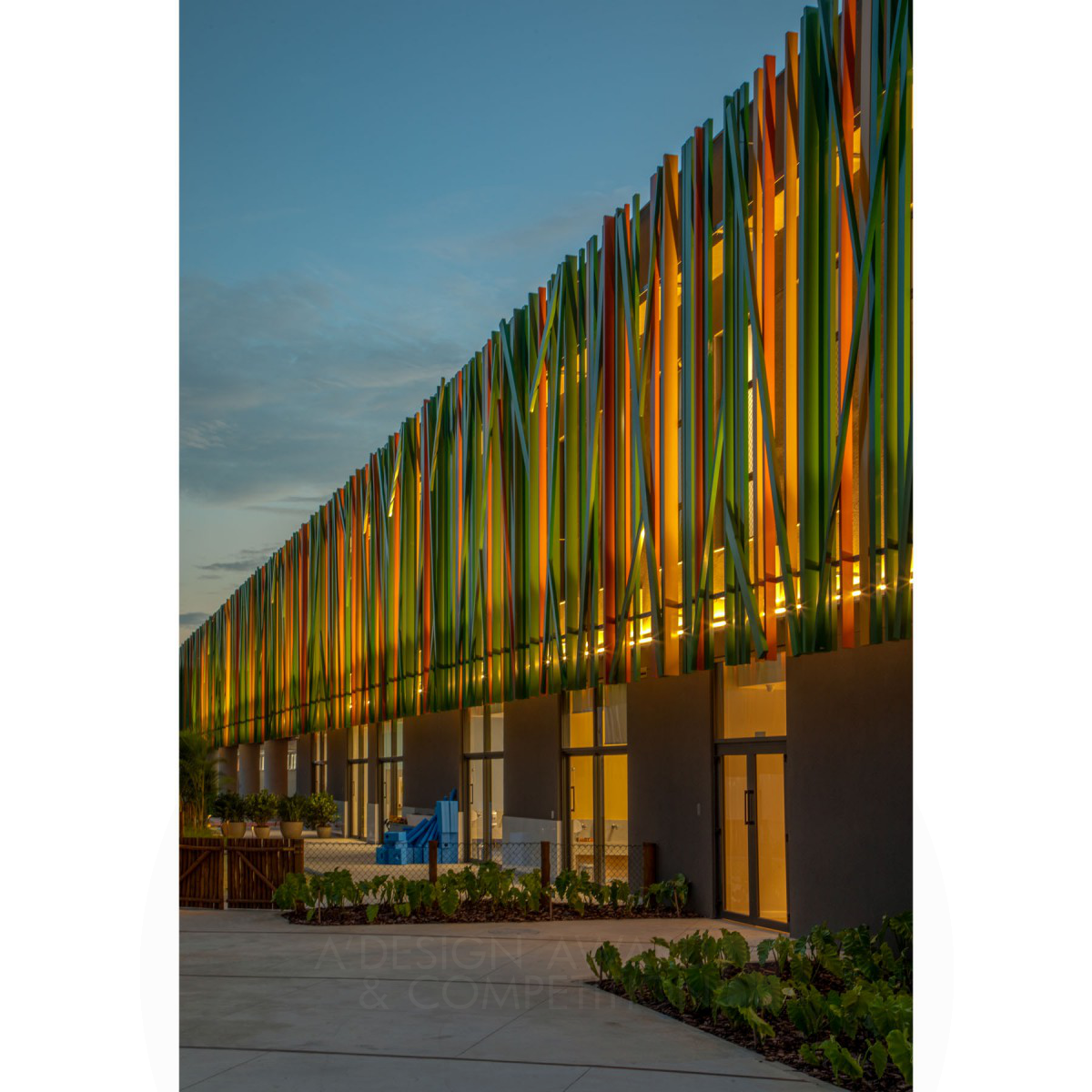 MPG : Eleva School site Barra is the second unit of an important network of schools in Rio de Janeiro. The project is adapting a fairly horizontal commercial building to receive the school's program.

MPG : The external “skin” that overlay the entire building was projected to reduce the incidence of sunlight on the east and west facades by 50%. Its design also has an ecological and educational character, since it reflects the original ecosystem of the region based of swamp and mangrove. The façade project elaborated by our team offers a interpretation of this vegetation characteristic emerged roots. The chosen collor palette respects the natural chromatic variety of this type of vegetation.

MPG : Eleva School began its activities in 2017 with a first unit in Botafogo, in a historic building. The following year, we inaugurated an enlargement in the same building. In 2019, we inaugurated the Barra unit, which was awarded by the A'Award. By 2020 we are already designing a new school in Brasilia. Their plan is audacious. Inaugurate one school for about 1350 students per year. It is a commercial and architectural success. The more international recognition the projects have, more I accredited to continue signing their expansion.

MPG : It was surprisingly fast. We were contracted in December 2017, the project was ready in April 2018 and the works started in June. Eight months later, the school was opening.

MPG : We were contracted to transform an old commercial building into a vibrant school. The clients had little to opinate. Only on budgets. All the architectural inputs are signed by our studio

MPG : Does not apply for architecture

MPG : The surrounding landscape guided our decisions. The external “skin” that overlay the entire building was projected to reduce the incidence of sunlight on the east and west facades by 50%. Its design also has an ecological and educational character, since it reflects the original ecosystem of the region based of swamp and mangrove. The facade project elaborated by our team offers an interpretation of this vegetation characteristic emerged roots. The chosen collor palette respects the natural chromatic variety of this type of vegetation.

MPG : We studied in depth some very good educational buildings all over the world. I visited some of those who have relations and exchange programs with Eleva School. I visited schools in the United States, Italy, England, Sweden and Denmark. Not exactly because of the design, but a lot because of the different dynamics and protocols of an educational program. Nothing is more seductive than projecting something that we do not master.

MPG : In the end, our final customers are 1350 students, ages 3 to 18, and especially their parents. Those are so many clients we must attend to and principally not make any mistakes. There is no more critical client than school parents!

MPG : The design of each unit of the Eleva School is unique. The first unit is located in a historic building from the 18th century. We chose for the new units to be designed, to reflect aspects from the flora and the local landscape in its architecture, in its design and mainly in its palette of colors. The Barra unit, prized by the A 'Design Award, shows the roots of the surrounding swamp and mangrove vegetation in its facade. The future unit in Brasília will present elements and colors of the wild, desert vegetation of the interior of Brazil.

MPG : Eleva is the name of an important educational group that belongs to the Lemann Foundation.

MPG : I start with paper and pencil. I am quite old-fashioned. When my sketch is passed to my team of architects, we work on VectorWorks, AutoCAD e ArchiCAD (BIM), Sketchup and 3DMax.

MPG : One of the biggest challenge for the project was the presence of the main block of the existing building to be renovated, which was an obstacle to the movement of people, ventilation and especially for the view. An obstacle to induce a sensory domain of the whole site, dividing it into several smaller areas with no connection or dialogue one to each other. The project starts from eliminating significant area of the ground floor of the largest existing building a great covered pateo. It becomes the circulation and distribution hub of the school, a new axis that connects all the landscaping areas of the complex, with the aide of a central internal garden.

MPG : The first conceptual sketch is my main role, from there on, my team assumes the development of the project. We always work in close contact with the technical designers. In the project of this school, the structural engineer, the landscape designer, and the lighting designer have essential roles. The exchange between the architecture studio and their teams is quite intense. I have to highlight the special aide of Eleva educational team. I can say that we designed this school together.

MPG : The Lanscape designers and Lighting designers were essential to the success of this project. For sustainable reasons we had to work mainly with natural lighting. Some attention was taken in planning the landscape. Large trees were used to contribute to the shading of the façades. Mostly east and west. We also suggested the choice of fruit trees for the attraction of fauna. We specified plants of the local flora, many succulents and species resistant to drought in order to avoid the water consumption required to maintain other species. In the outer sports courts we proposed the use of synthetic grass. All to save water. All pathways are made of drainage materials.

MPG : We were always based on all reports and researches of educational institutions provided by our contractors. They all guided our project always in the best direction.

MPG : The biggest challenge was to minimize the effects of bad orientation of the existent buildings. Its facades are oriented to east and west. The west receives the afternoon sun, having its greater thermal effect between 15:30 and 16hs. This is exactly what we have to avoid in any minimally sustainable project. The east facade receives the sun throughout the morning. In the case of the school, which is equally damaging. To minimize this problem we proposed a "skin" enveloping the entire building

MPG : It was one of the major projects carried out by my studio last year. One of those who deserved our greatest dedication. Seeing it awarded with the A 'Design Award is a recognition for all my team and their efforts.

MPG : When I first started designing Eleva School in 2016 it was my first educational project. Three years later, I can say that I am specialized in eduacational buildings. We designed already three schools with more than 12,000 square meters each. One build per year. And also several extensions and renovations through that time.