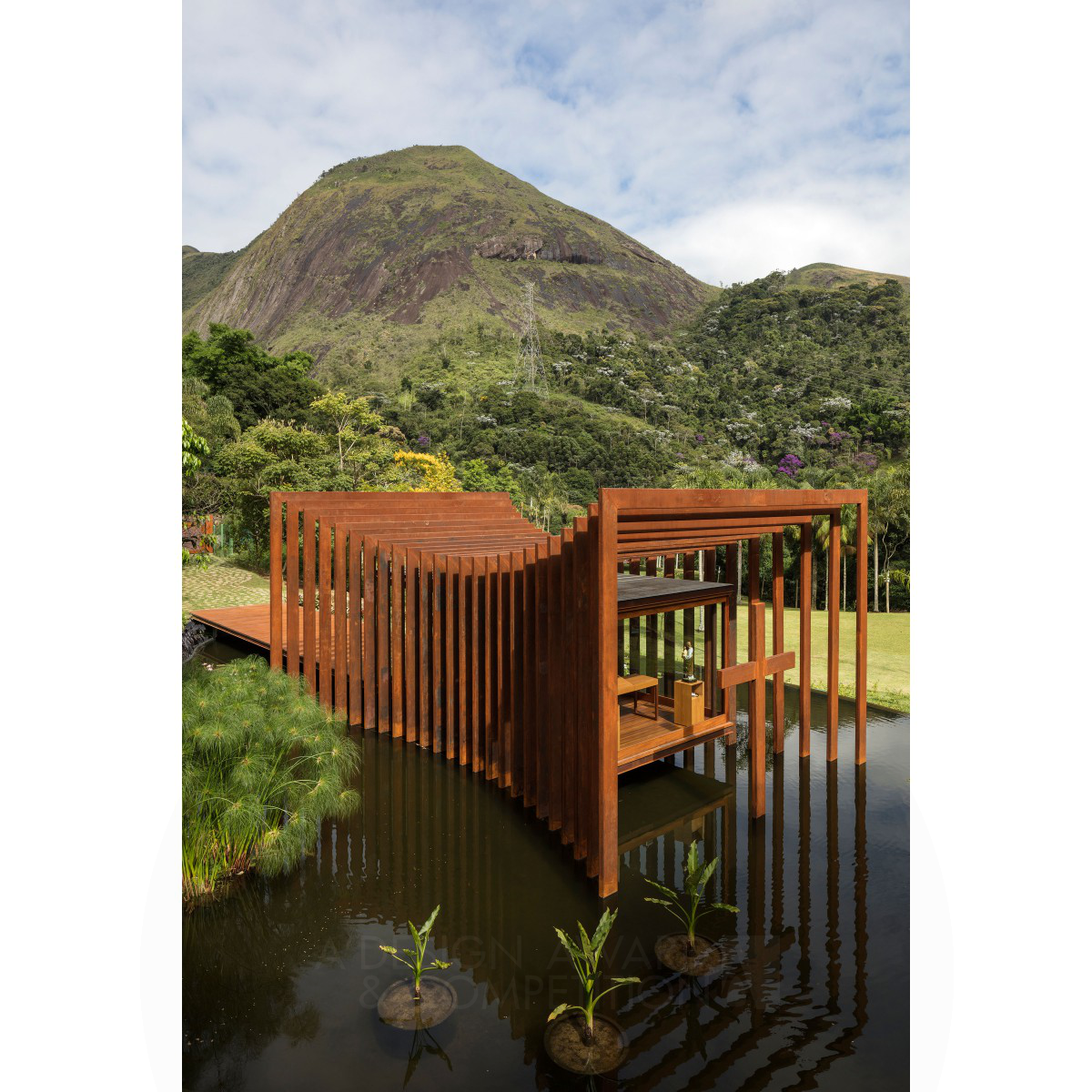 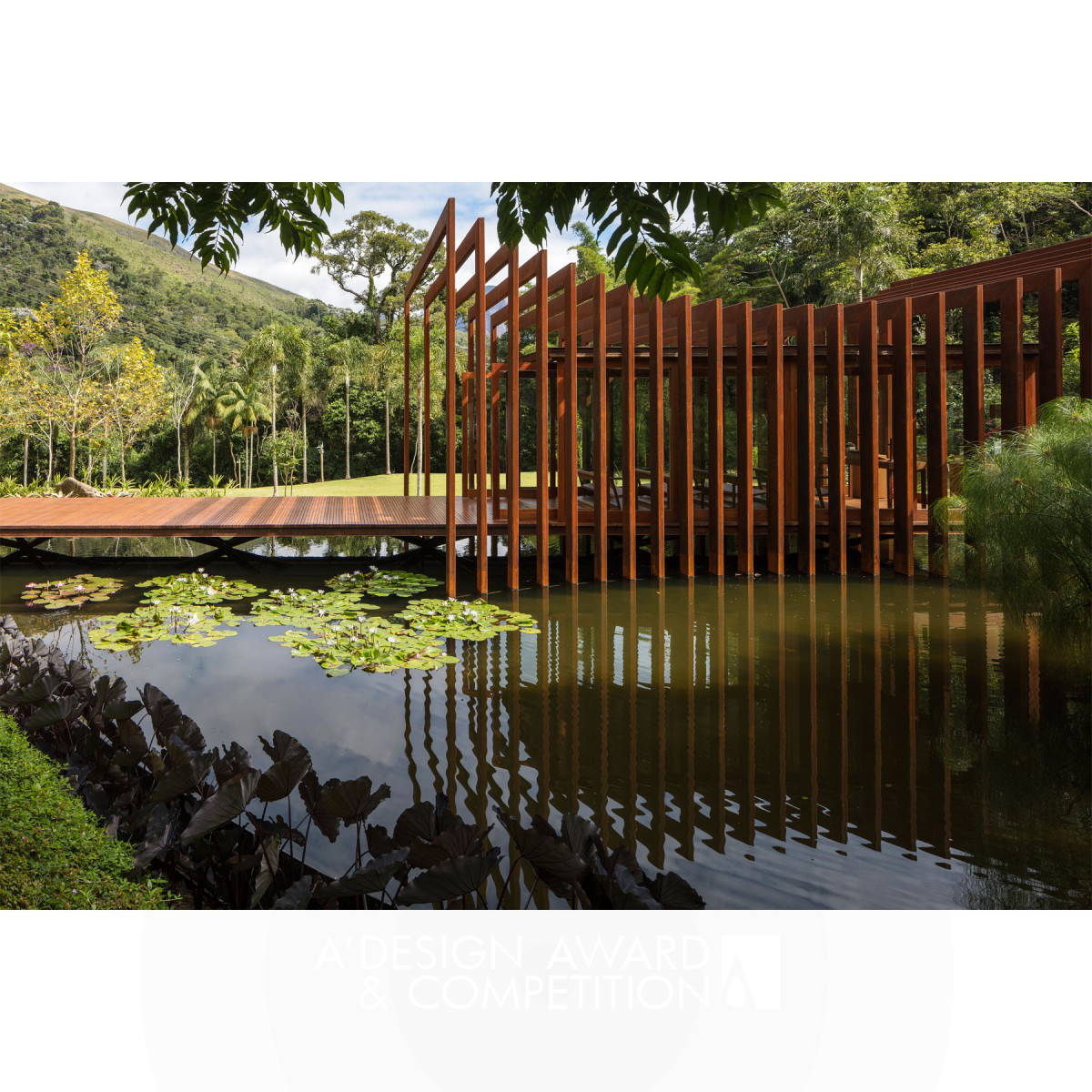 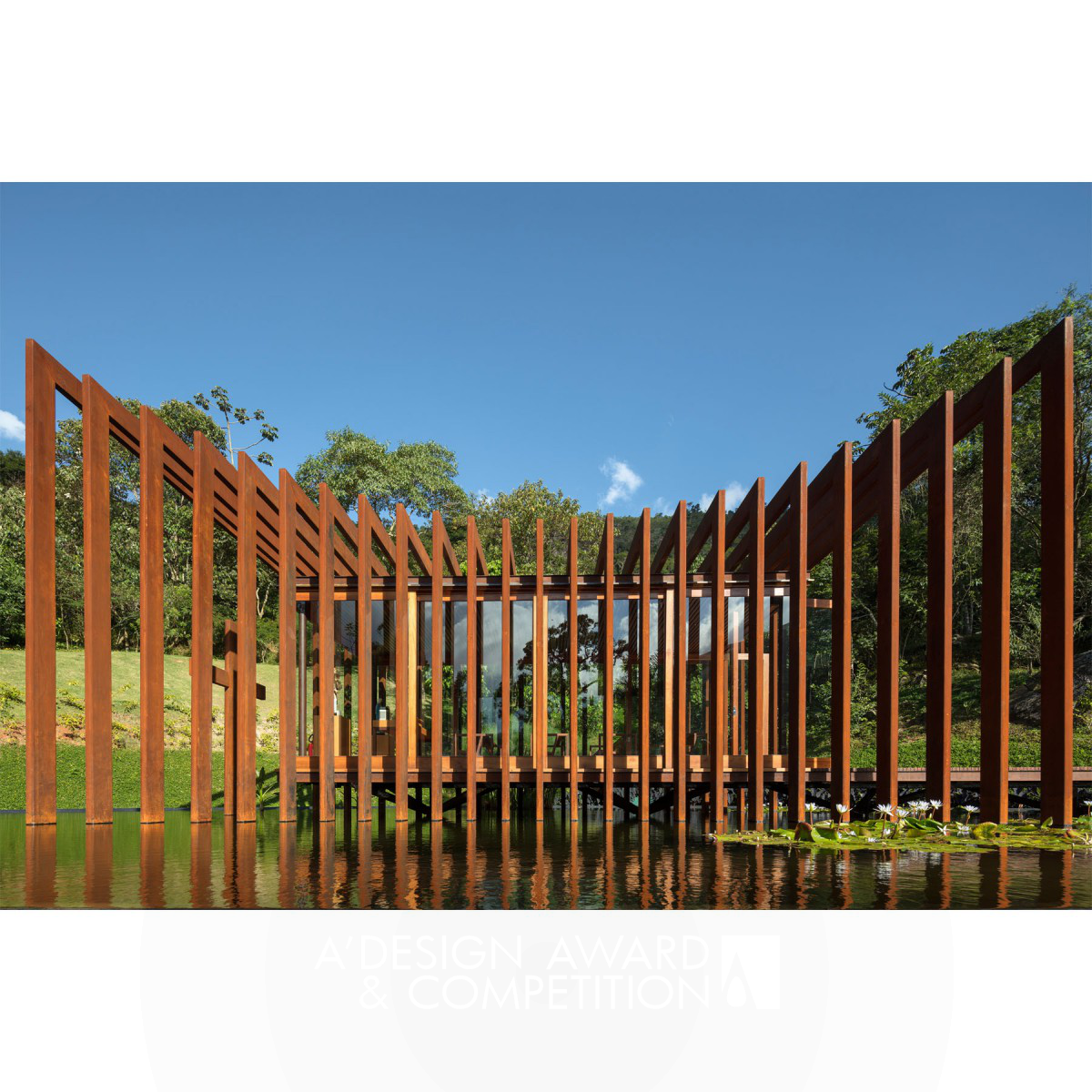 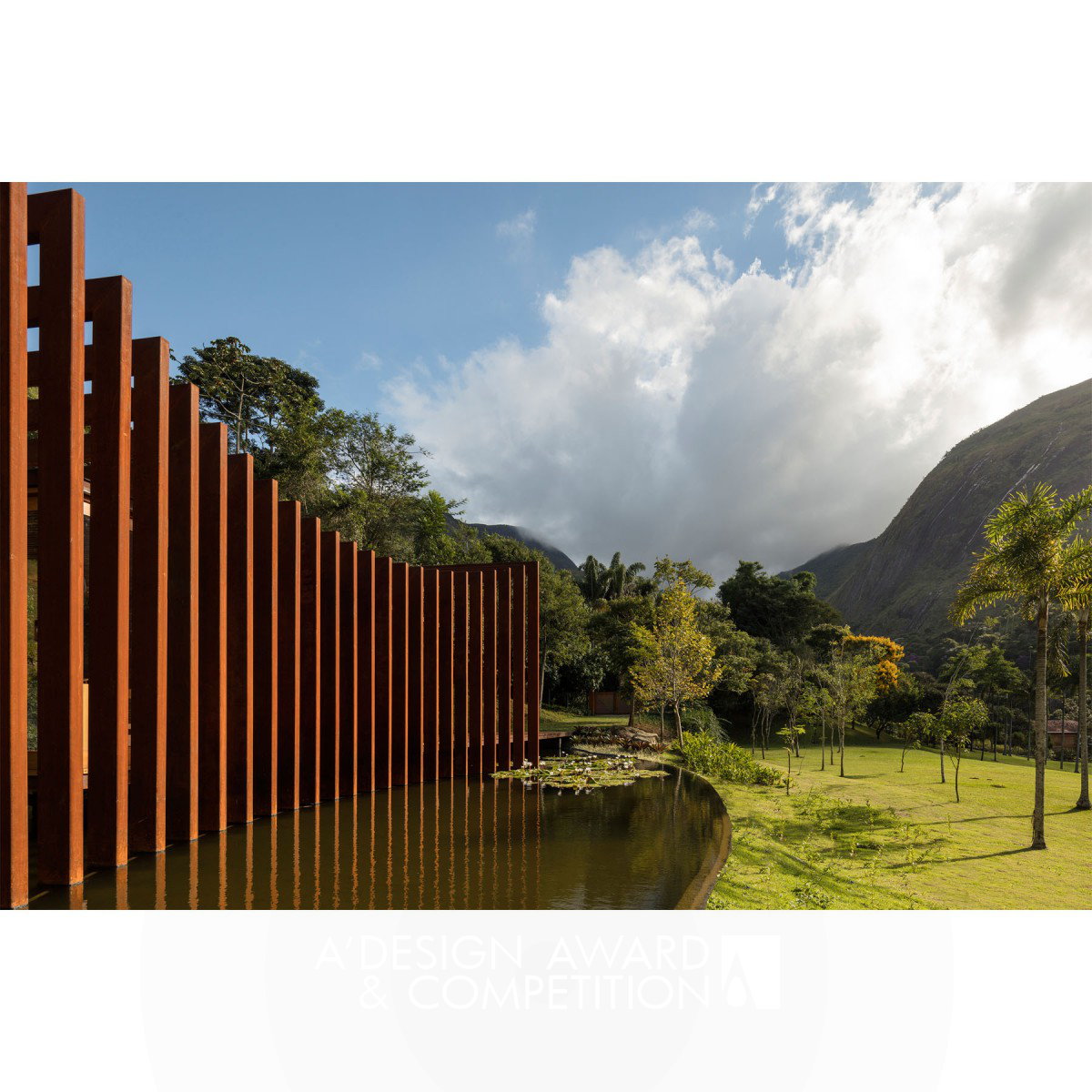 MPG : Nascimento Chapel follows an important tradition on brazilian architecture that is the construction of religious buildings on private residences. During the colonial period (especially sec XVIII and XIX), over the influence of portuguese architecture, most of the farms had it own private chapel. The farms and sorrouding cities were part of an important economic system based on the culture of coffee, one of the pilars of brazilian economy by that period. The existence of such peculiar architectutral buildings were such a landmark that they boosted an artistic style that was once very remarkable and important for Brazil. This artistic style was given the name of Barroque, its most well known being the one developed in Minas Gerais. Nscimento Chapel is located on the mountains near Rio de Janeiro, for coincidence the same region as the historical colonial farms, where these type of project was so common.

MPG : We have taken advanted of the area’s topography to the creation of a lake, so the building could float over it and so it could mirror the facade of the chapel that laid on top of it. When it happens, the mirroed image replicates the same form as its blueprint

MPG : I truly believe that this project can be widely awarded and publicized around the world. It is not always that an architect has a chance to design a religious building, and I feel that there is a lot of interest from architecture consumers to this typology of architecture.

MPG : We were comissioned to design this chapel. It dialogues with important architectural and artistics movements in Brazil Art History. Inicially with the colonial architecture in its essence: the private chapel program itself. Following the Barroque movement, so present on the country religious buildings. Its steel frames exceed the boundaries of the building working as space sculptures. Exactly as the barroque altars and sculptures from the past that were used to breach the physical limits of their supports. And finnaly it uses some essencial elements from the modernism as the brise-soleils and its curved form, on its blueprint and façade. Those elements were very present on the brazilian modernists buildings, specially those designed by Oscar Niemeyer and Sergio Bernardes.

MPG : Does not apply for architecture

MPG : We were comissioned by the clients for designing a private chapel on their mountain retreat.

MPG : Although it has been very constant in the past, nowadays the commission of religious buildings in brazilian contemporary architecture is not common anymore, even though all over the world many of the most important international architects have a religious building on their portfolios, these include Tadao Ando, Shigeru Ban, Renzo Piano, Alvaro Siza, Oscar Niemeyer and others. Their work really inspired me.

MPG : Fifteen years ago we designed a vacation home for a client, whom later sold it to a new owner. This new buyer has then bought several sites surrounding his land and contacted us in order to elaborate a project for a private chapel inside his property. He and his wife, married for a few years and with grown kids, envisioned a space dedicated to their saint of devotion, where they would be able to, in the future, renew their vows and see their children getting married, as well as baptizing their grandchildren and on it goes.

MPG : In very few projects we have this creative freedom. Any other typology, residential or commercial would be full of demands and questions that we would not be able to accomplish such a free design.

MPG : It's is the surname of the owners. Normally it is how we call our projects.

MPG : I start with paper and pencil. I am quite old-fashioned. When my sketch is passed to my team of architects, we work on VectorWorks, AutoCAD e ArchiCAD (BIM), Sketchup and 3DMax.

MPG : Definitely understanding the local Nature and natural landscape. This is the basis of sustainability. Studying and understanding the peculiarities of climate, rainfall and flora. My work has to have one eye to the environment and the other to the past. I pursue the best Brazilian Project , which best interprets the traditional Brazilian architecture incorporating elements of the indigenous housing, the Portuguese colonial buildings and the modernist repertoire.

MPG : The first conceptual sketch is my main role, from there on, my team assumes the development of the project. We always work in close contact with the technical designers. In the project of this chapel, the structural engineer, the landscape designer, and the lighting designer have essential roles. The exchange between the architecture studio and their teams is quite intense.

MPG : Especially the structure engineering that put up the metal portals. The rest is faith! Something so ancient and analog.

MPG : Basically the research on the climate and local flora. It is necessary to understand the daily movement of the sun and between all seasons. It is also necessary to know the original plant specimens or the ones that better adapt to this particular ecosystem, in order to improve a faster and less costly development of the garden and design a landscape that use less amount of water for artificial watering.

MPG : Working on such an unusual project was a challenge. How to express contemporaneity to such a traditional program? How to balance architectural audacity with the necessary intimacy of a religious space? We hope we have been successful in that task.

MPG : It is our first participation in the A' Award Competition. And I really feel our chapel projects reaches the required level of excellence of this International Prize.

MPG : Each project makes us evolve professionally. I particularly enjoy working on different projects whose dynamics we do not master. This forces me to research and study. It takes time. Nothing is more rewarding than that.

MPG : All the furniture inside the chapel was designed by our architecture studio using two different woods from the brazilian flora, peroba and cumaru. The lighting design is signed by Maneco Quinderé, one of the South America masters of the light, that emerged from theatre, opera and rock concerts. We imagined something very dramatic for that worship place.