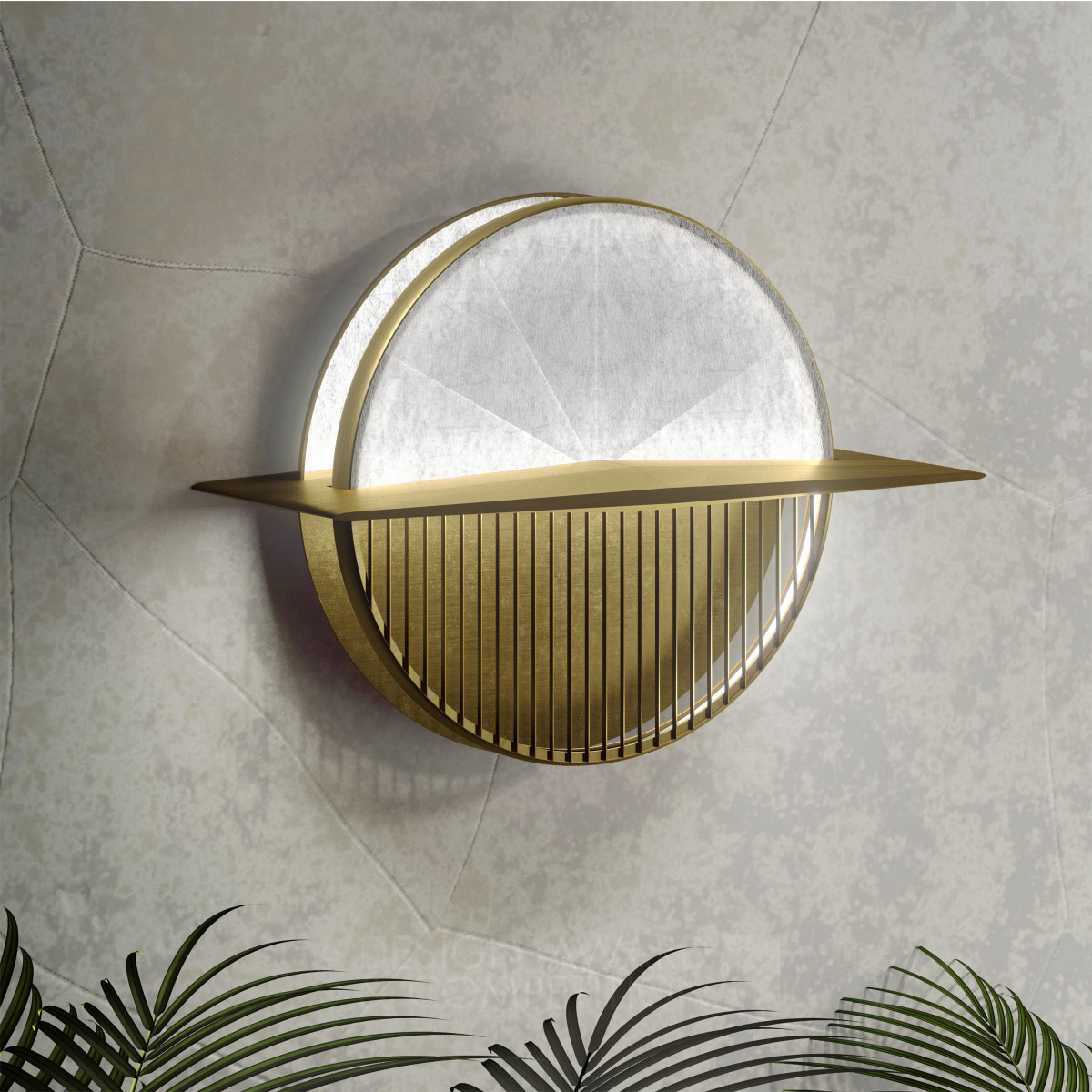 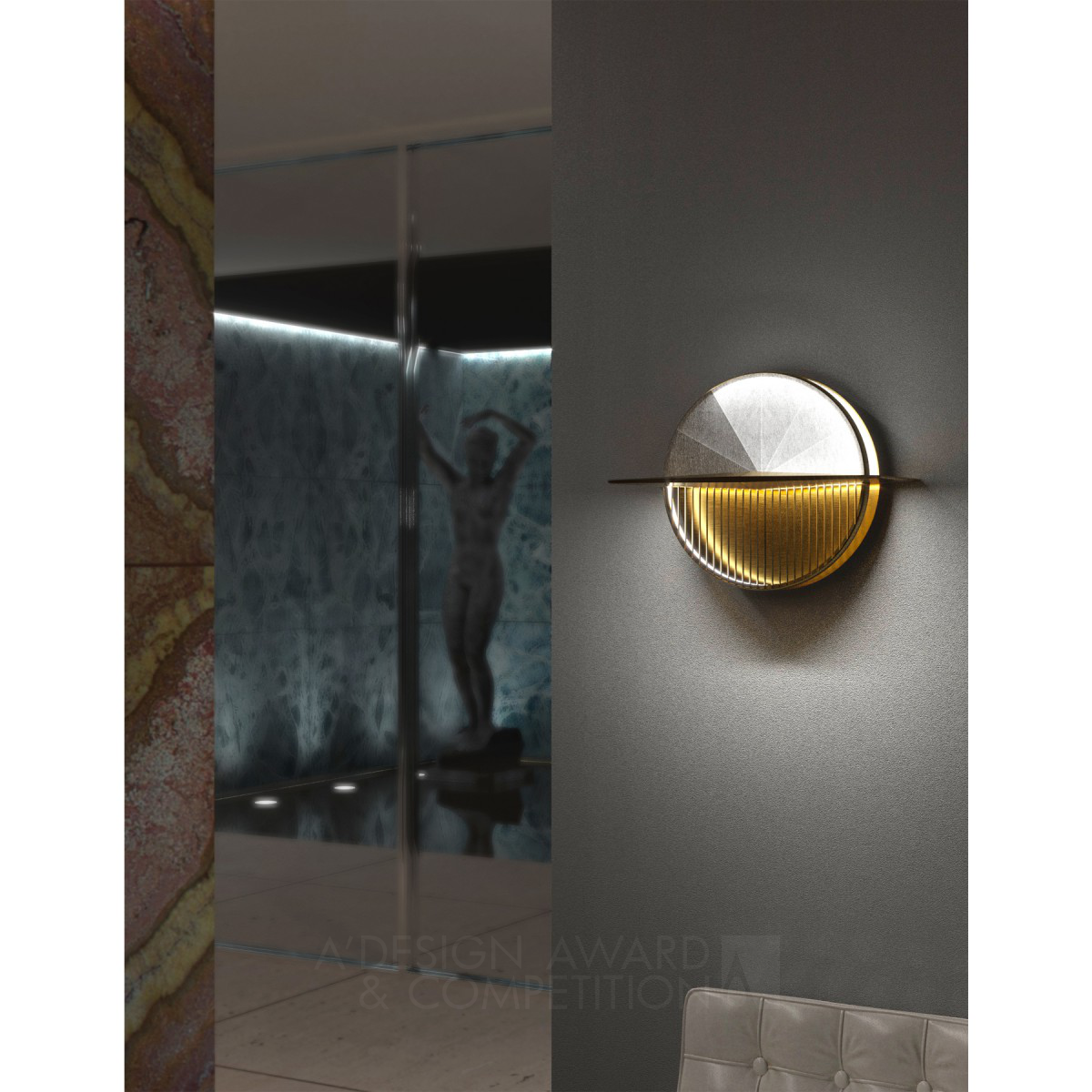 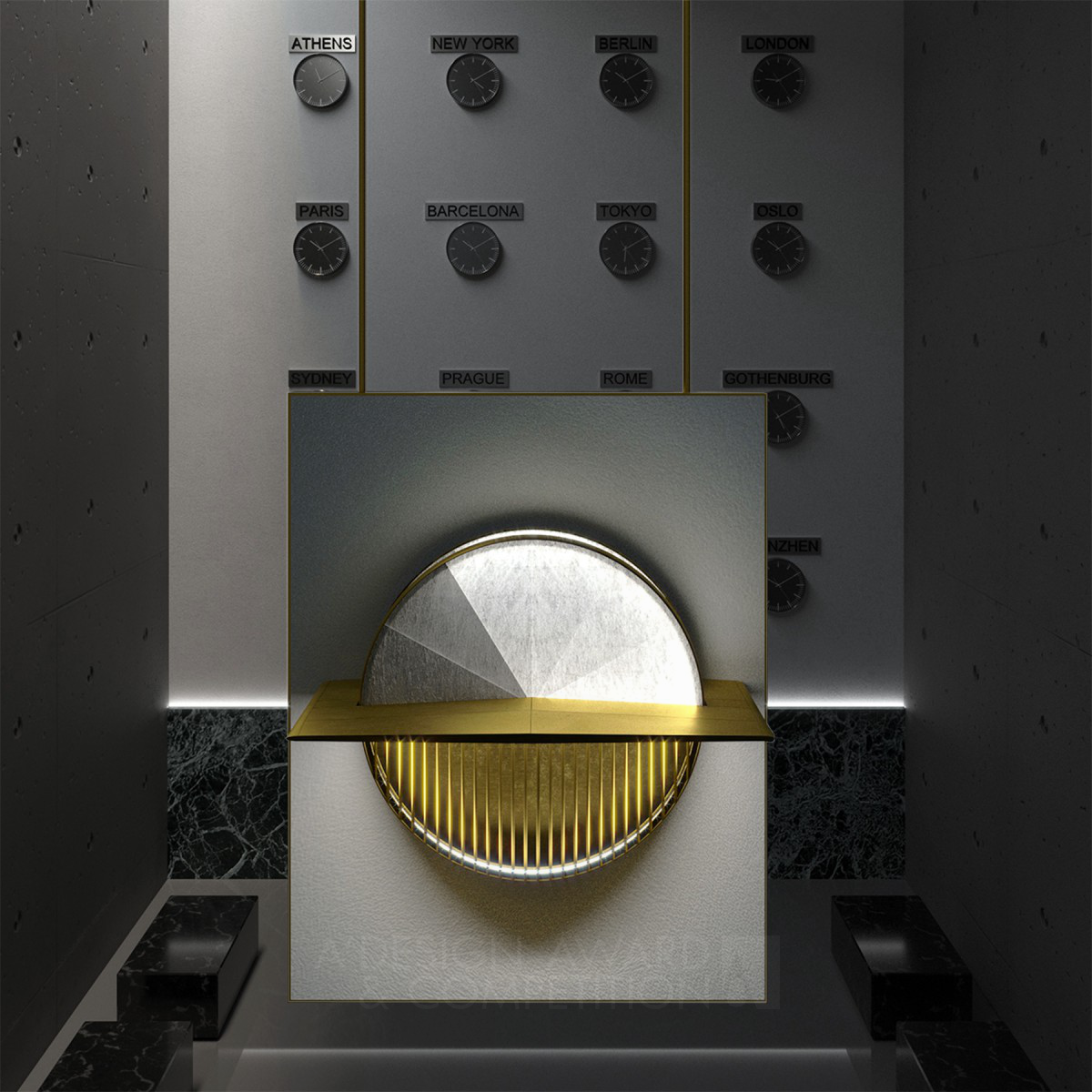 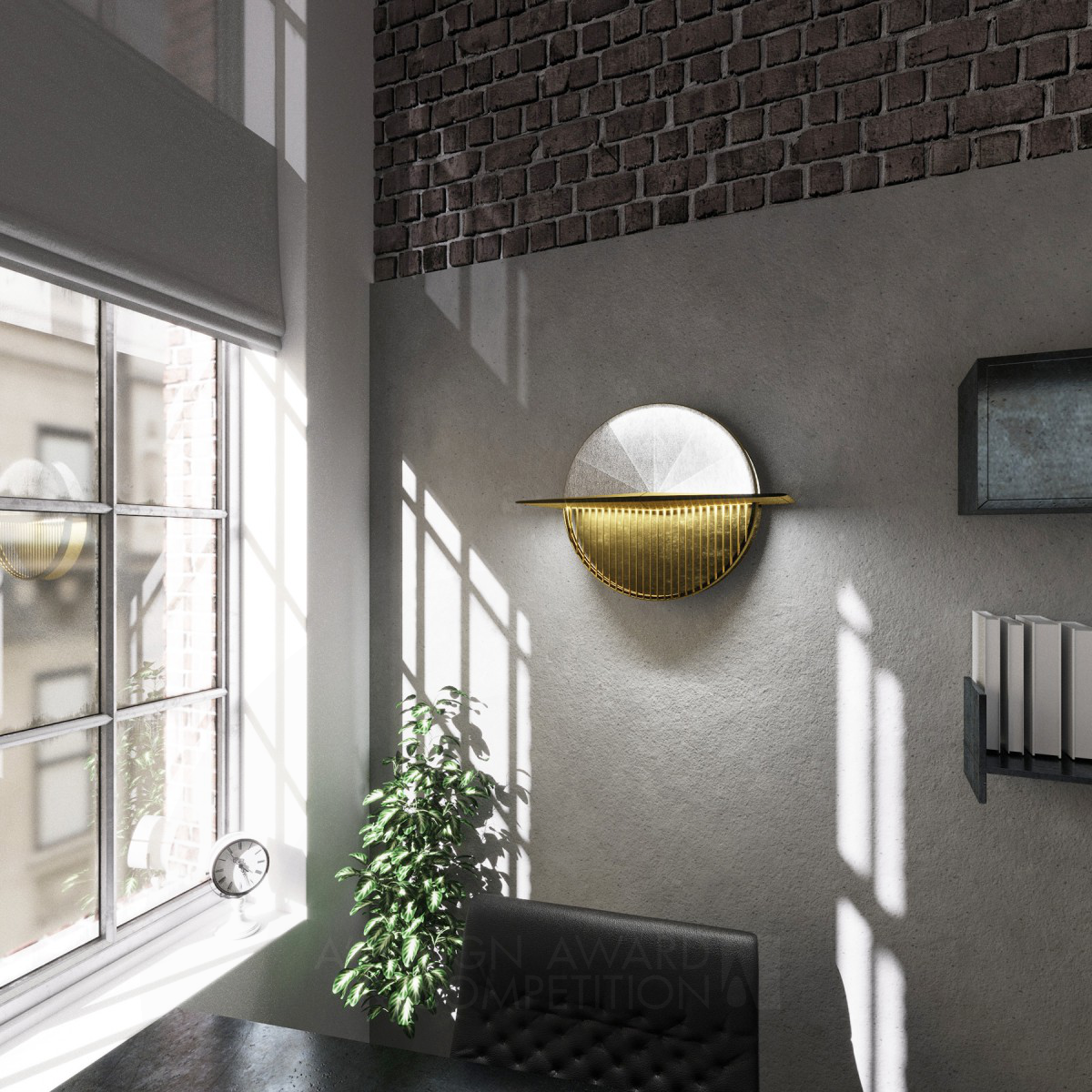 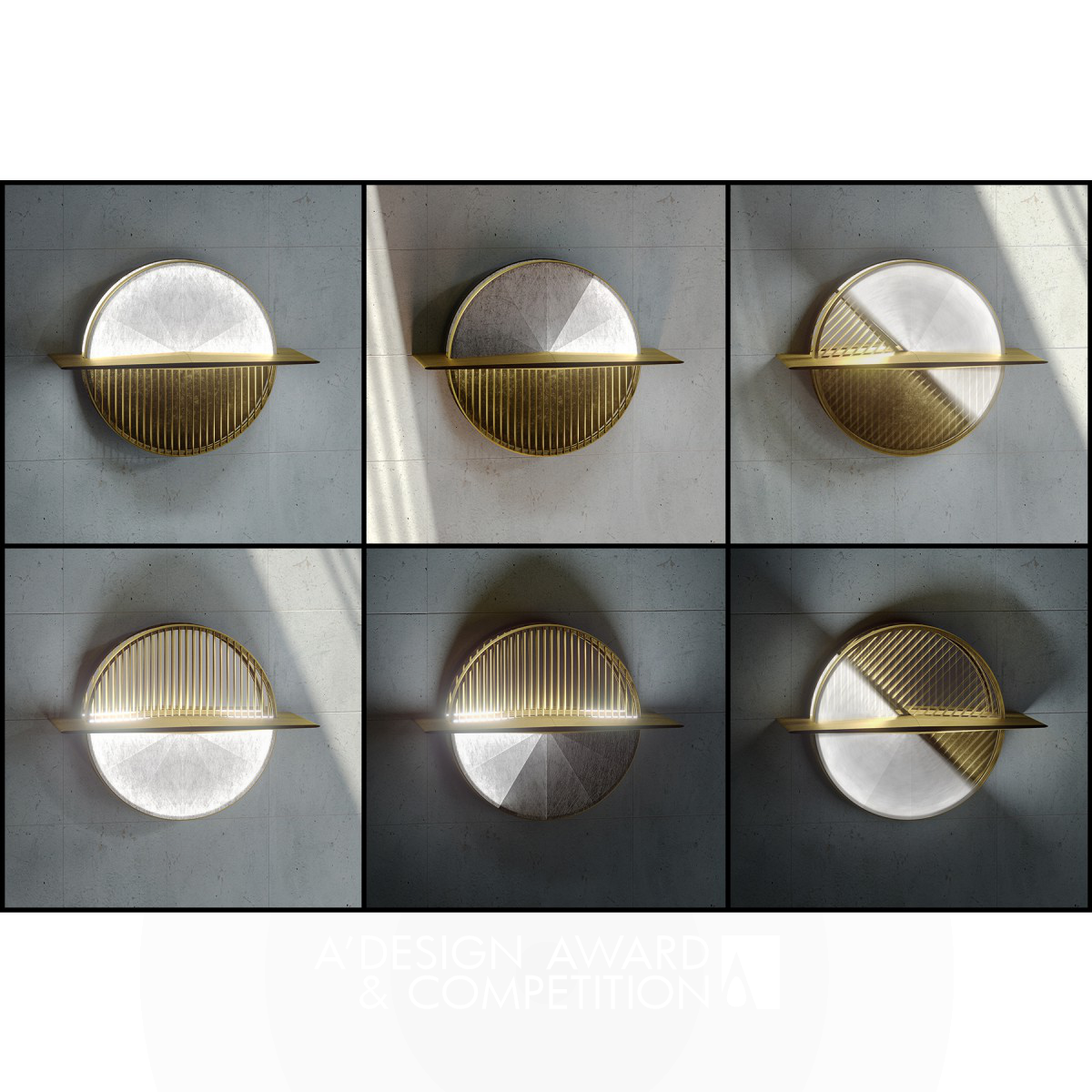 AAS : The inspiration to design this lamp emanates from the desire to match two inseparable concepts, that of time and light. The marriage of those into an object that resembles a clock yet exists as a wall lamp initially sprung from the observation of sunclocks. Shadow and light unite and produce the notion of time. In this case the game between light and shadow applied onto a reverse sunclock half fiberglass half brass gives birth to a hybrid product, a ying yang existence of time and light.

AAS : We really wanted to work again on the notion of what a lamp is, and what a wall lamp can be. We wanted for once more to suspend the classic “static” notion of a lamp and try to achieve something new, something vibrant. The greatest design challenge in that case was to find a subtle yet profound way to combine the concepts of time and light into a multifunctional object with character and unique form. We also desired to create a formalistic and conceptual continuity with our previous awarded design exploring the concept of reverse-ness. Turning realities upside down instead of tossing them away fits into our mentality of looking in the past in order to create a consistent line from the past to the future.

AAS : Our plans revolve around the construction of our concept lamp, but first we want the world to learn as much as possible about our design

AAS : The project started with an abstract sketch and was completed within one month.

AAS : Our main goal was to win the A’ Design Award again, which we did and we are very happy about it. We also wanted to create a sibling lamp to the one that won the silver award last year.

AAS : We intend to produce our work ourselves, since we haven’t yet found any interested companies. However we are open to discuss a production collaboration.

AAS : This year we wanted to pursue and experiment on the concept of antithesis between light, shadow and time. We wanted to create something new and fresh that combines these notions into one object.

AAS : No. Our work is totally a product of our in-between influence.

AAS : Anyone who is willing to try something fresh but also timeless, something memorable.

AAS : We think that it is a unique piece of design and that there are no similar concepts around, at least to our knowledge. It is a piece that brings all human senses to life while someone is using it and it is also very practical.

AAS : The name came up as a direct reference to sunclocks mixed with the idea of reverse-ness that we introduced with our last year design “Reverse Sunclock” which won the Silver A’ Design Award.

AAS : We sketched a lot at the beginning, so as not to prison the idea into anything concrete. Following this first phase of experimentation came 2d, 3d drawings that clarified its form and then videos in order to show its movement.

AAS : The uniqueness lies into the harmonious coexistence of a clock and a lamp in a statement of an object. As the time passes a discus gradually lights off in parts which correspond to the segmentation of a clock. Half translucent fiberglass, half goldenlike brise soleil the discus rotates corresponding to the different needs of direct and indirect light during the day while always indicating the time. A slimmer discus half mirror half brass behind the main one accentuates or diffuses the light.

AAS : We didn’t consult people with technical/specialized skills during the concept phase apart from some friends who helped us decide how we could move on with the electrical parts.

AAS : The design is based upon the use of LED tape and a timer. The 6 segments of fiberglass of the upper half discus gradually light off from 9am till 3pm and then the discus rotates 180 degrees. The same process occurs from 4pm to 9pm and repeats itself every 6 hours. The rotation axis and motion rotors are found inside the slim base cutting the lamp in half. The rotation is set off through a hidden timer connected to two also hidden power adapters inside the lamp's backbase. The discus consists of a brass wreath holding the fiberglass and the brass brise soleil semicircles. Two pieces of fiberglass 3mm thick are held apart by the wreath so as for six strips of LED tape to be placed between them on the wreath's 1cm internal surface. Another LED strip covered with plexiglass is placed behind the brass 3mm bars of the lower semicircle. The timer and adapters enclosed in the brass backbase offer signal and power for the lighting on, off and rotation of the lamp. The circuit enabling the function consists of two adapters and a timer. The six strips of LED tape on the upper half as well as the strip on the lower side are controlled by PCB units placed under them. Each of the upper strips lights off per hour following the timer's signal which also sets off the rotation axis every six hours. Necessary wires travel through the slim base's hollow edges to the lower backbase.

AAS : Our architectural background drives us to re-evaluate the core of forms and notions in order to give birth to new and exciting ideas like some of our influences: Le Corbusier, Mies Van Der Rohe, Rem Koolhaas. Our research follows our awarded with Silver A Design Award Reverse Pickup Table Lamp case study and aims to take it a step further through the transformation and re-interpretation of every day forgotten objects into elegant contemporary design products, like the Pickup or the Sunclock.

AAS : The greatest design challenge was the giving birth to an "eternal" and timeless piece of furniture through the use of priceless materials while at the same time making use of a post-modern and pop concept such as the pickup.Our preoccupation was to create a "Less is more" and featherweight kind of design despite the use of heavy and expensive materials. For more palpable challenges, we should mention the moving sensors explained in the “role of technology” question.

AAS : We thought that it was a good idea which should have the chance to get the attention it deserved. We also wanted to see whether we could win the award for a second time.

AAS : We started paying more attention to the technical details of our design, given our first experience with the Reverse Pickup Lamp. We understood that apart from fresh, interesting and functional, our design also had to be beautiful.

AAS : We think that everything has been covered.