We had the distinct pleasure to interview award winning designer Hardik Shah about their original and creative Residence design work. Hardik Shah is an award-winning architectural designer, that makes our world a better place with their original residence works. 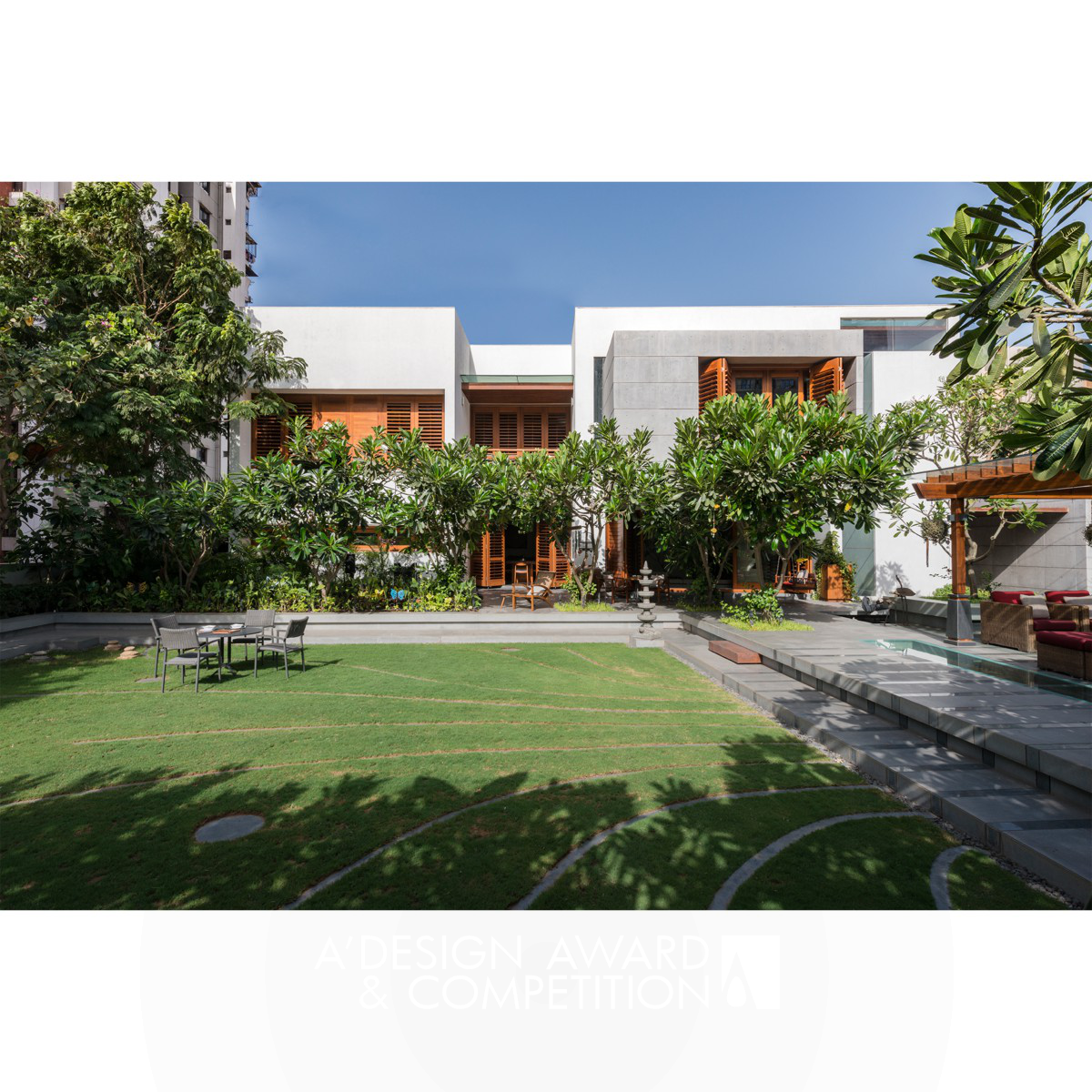 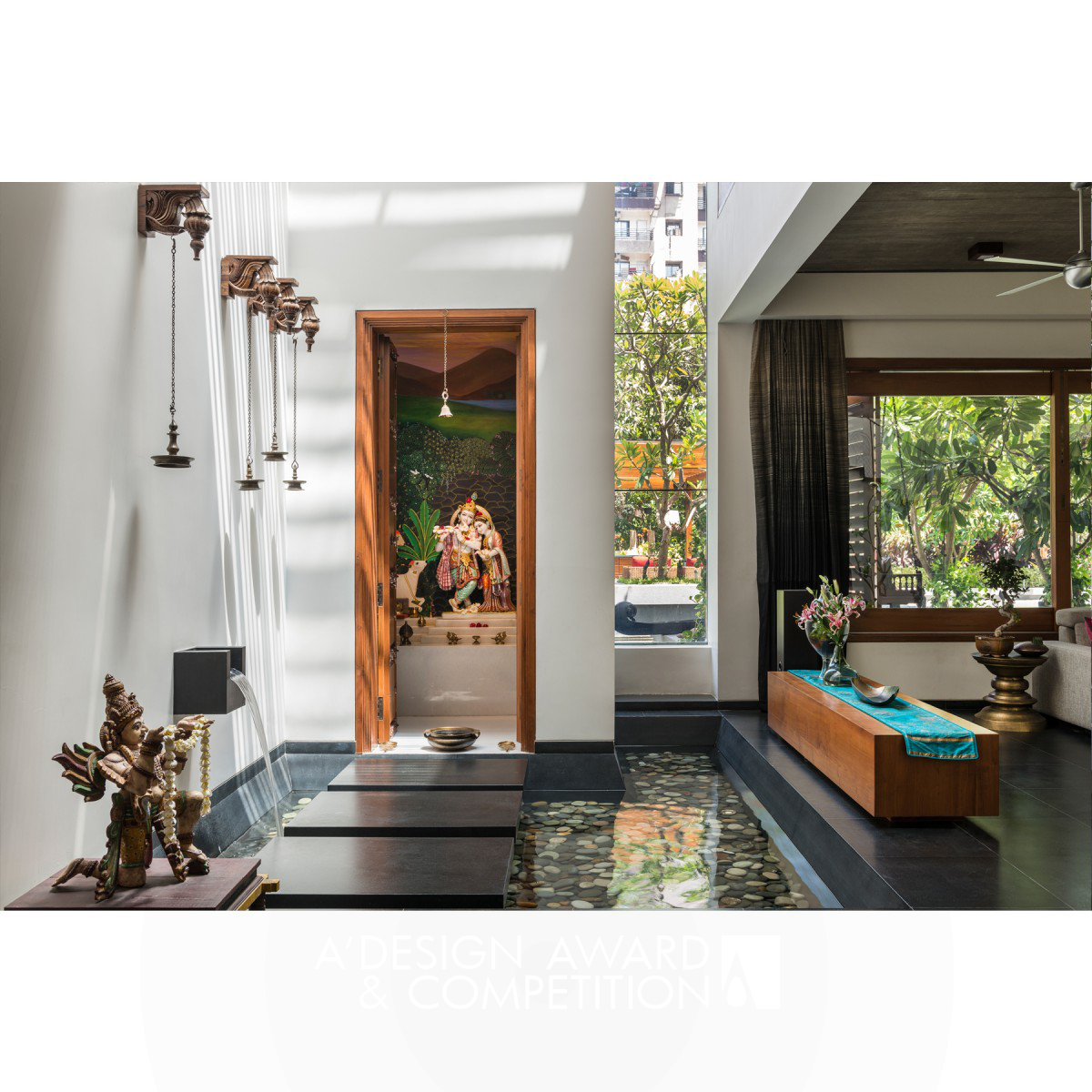 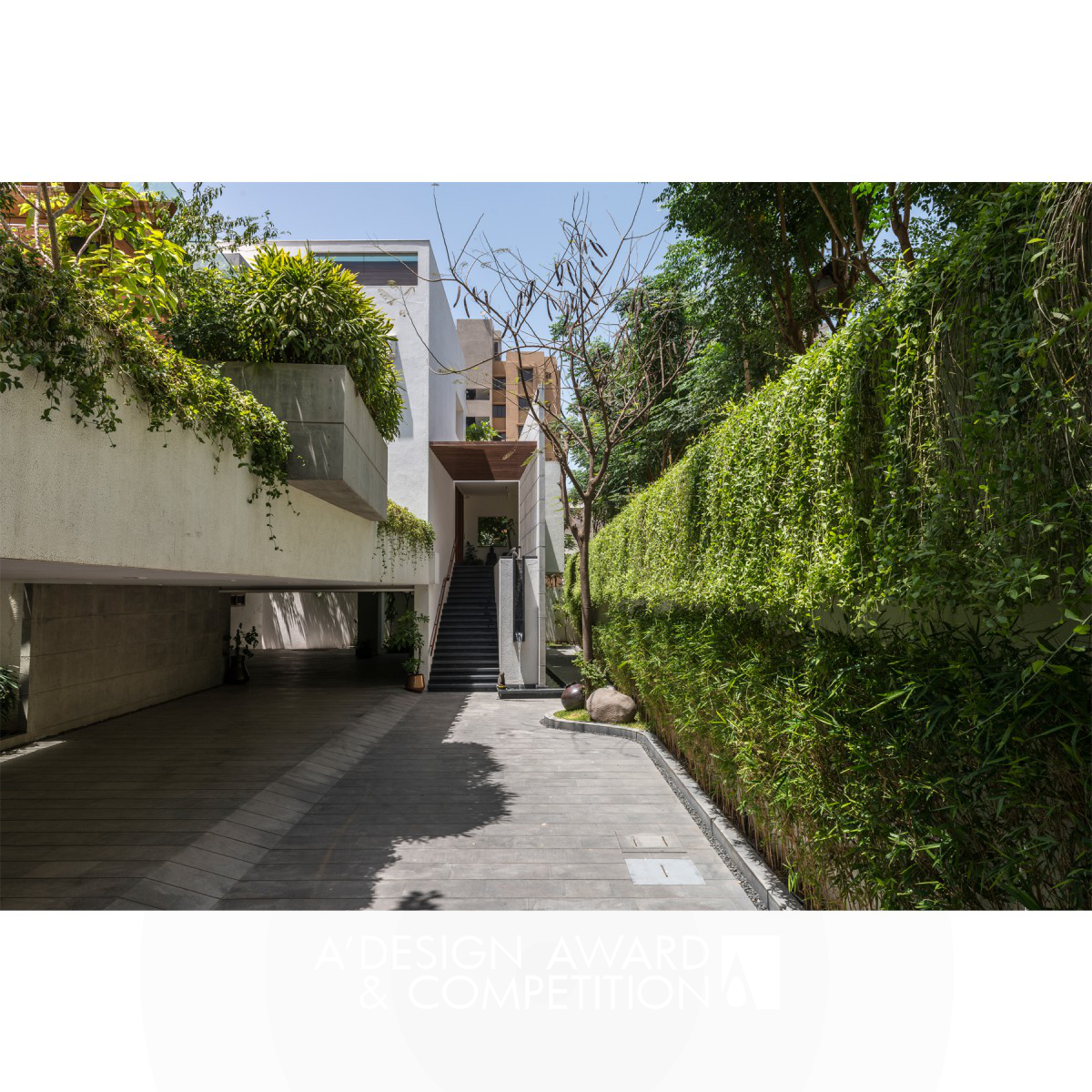 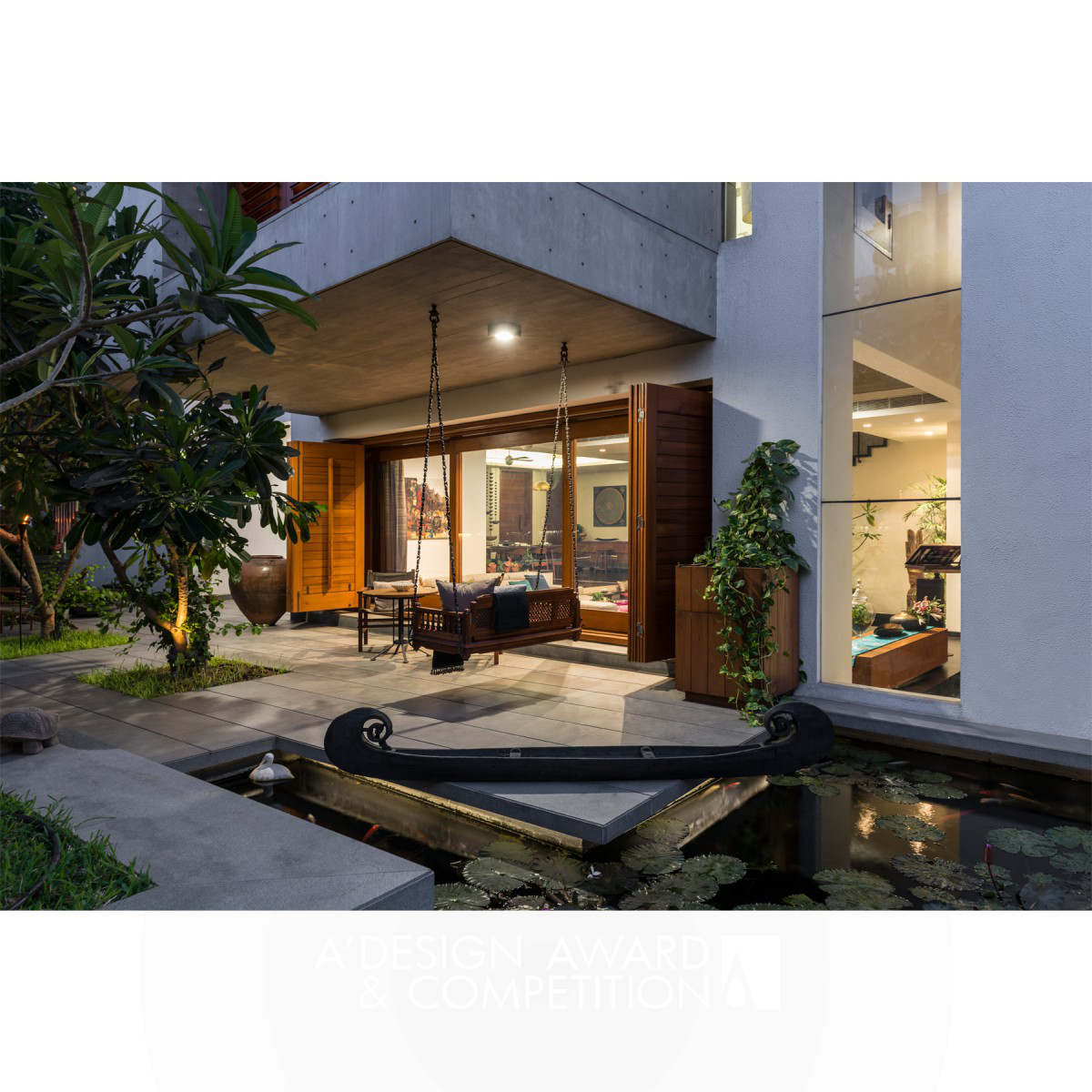 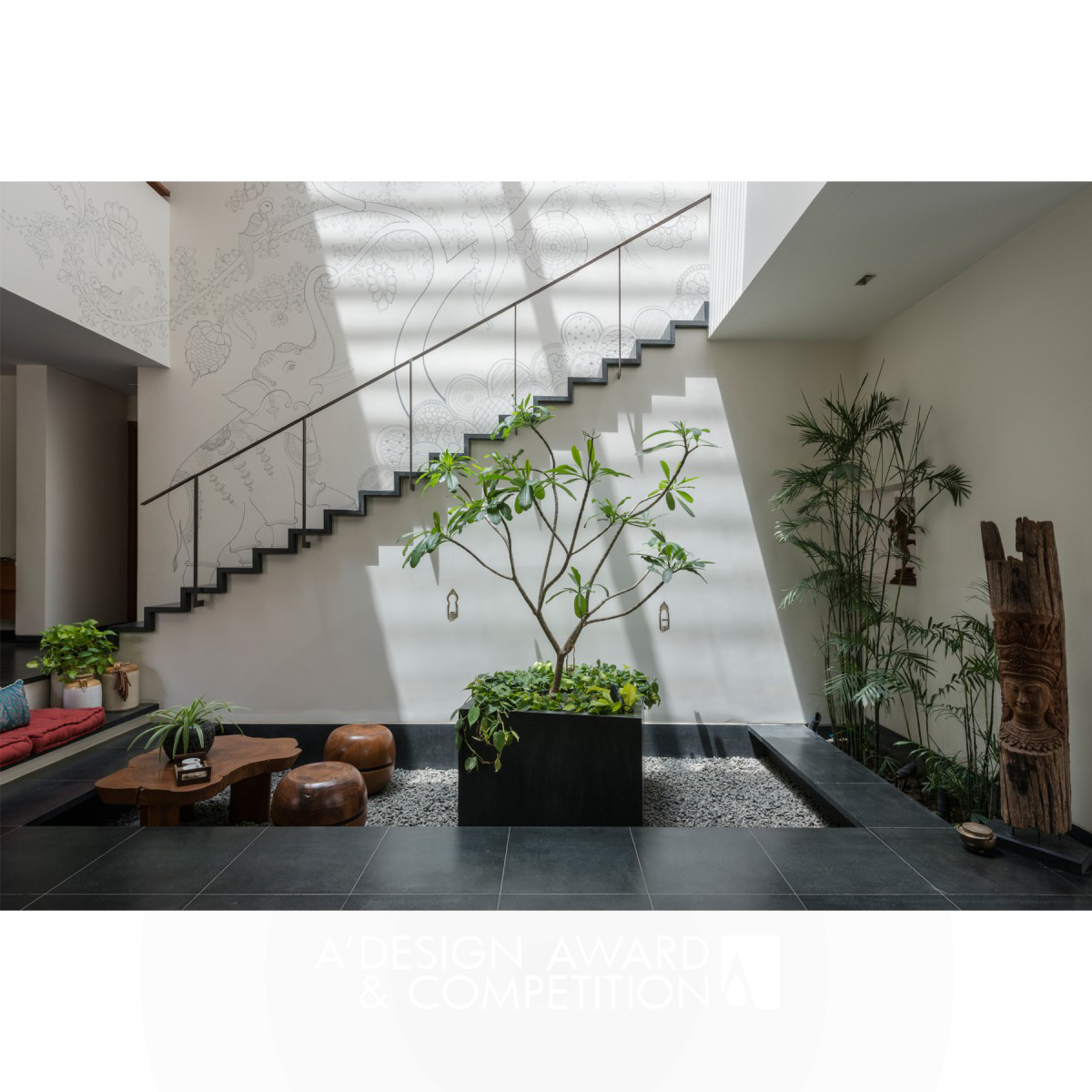 HS : Simple aesthetics, a minimal material palette and connections to nature are the main drivers of the design of the Skewed House

HS : The standalone 11,000-square-foot villa seeks to create an oasis of serenity in Surat’s typical urban milieu through a programme that departs from typical planning of this typology. Simply stating, in contrast to the way the urban areas are developing, we wanted to create a space which experiences the bliss of nature and hence aimed at controlling the lavishness of the house and leaving more space for garden.

HS : There are no specific future plans. But, we would never hesitate to register the design to any new award or publication platform that spreads its reach to a wider range of people, as we believe it is a way to come in touch of people with similar inclination and beliefs. And as far as the future of the building is concerned, we are blessed to see the clients maintaining it with the same amount of care the way we built it.

HS : The design is a mix of our inspirations and the client's requirements. The client’s request for connections from top to bottom, skylights, a distinct identity for the worship area, nature, and a play of light and shadow inform the spatial layout. However the way we achieved the client's desires roots down to our inspirations and beliefs. Our practice exists to challenge the Indian architectural landscape that is still quite unorganized, where ‘layers of materials’ have ruled over ‘purity of materials’. We believe in architecture that gives importance to the beauty of each material, by creating the right balance between less and more. And hence the use of materials the way they are in the project. Also, we believe in creating form that not only follows function, but creates spaces for lifestyles and cultures. As modernism and contemporary architecture is on its rise, often the cultural aspects and artistic value is lost. We usually try to blend art with architecture and hence came up ' The Dancing pachydrem' - A kalamkari style artwork at the staircase wall and 'The Krishna Vaas' - an enormous oil painting of Pichwai style in the pooja area.

HS : No we do not intend to sell or lease the design nor do we reproduce our work. However, we have worked with the similar concept, strategy and materials, as new clients are often driven towards the sensitivity and serenity of this design and insist on having a similar approach.

HS : As stated in the question no. 5, the client's guide to the quality of spaces, and our beilefs leaded to the particular type of work - Purity of materials, connection to nature, spaces where lifestyle and cultures house. A form that not only follows functions, but incorporates above all and at the same time speak of its time, i.e. stay modern and contemporary.

HS : Study of works of architects like Geoffrey Bawa, Anjalendran, who work in tropical context and study of Old Indian Art and Architecture influenced the project's design.

HS : Not being a commercial project that seeks customers, the owner of the house is the customer. And the design is customized for their lifestyle.

HS : The incorporation of artwork that speaks of culture, the control on lavish scale and newer ways of bringing in nature like outlining of glass , distincts the design from other modern contemporary residences. More importantly the relaxed ambience of the Skewed House can be attributed to its substantial greenscape and not technology !!

HS : My deep interest in photography helped me visualize this project as a series of interconnected vistas, and was also responsible for the ‘skewedness’ of Skewed House. Manifested subtly as elements shifted slightly off the straight line, this was an exercise in creating vistas and perspectives, and adding more life to a three-dimensional object.

HS : While designing mainly hand tools like sketching and physical models were used. Softwares like AutoCAD were used during the execution.

HS : The divineness of the pooja space is the most unique expression and is one of thousands of its kind. The family were devoted followers of Krishna — indeed, the spatial programme itself paid special attention to the pooja ghar, creating a soaring double-height volume seated within a waterbody. Rather than take the all-white route that’s currently the flavour for such spaces, we decided to celebrate the joy, vibrancy and romance associated with the Divine Cowherd —and therefore this luscious, pastoral setting created in the pichwai style. The 24’ high life-like scenery- spread on 3 adjacent walls, was first painted with acrylic colours on plywood sheets, which were then affixed to the wall. The L-shaped glass inset behind the pooja tower invites the surrounding greenery in and connects the interior waterbody with the external lotus pond visually. Who wouldn't want to pray in this serenity.

HS : The building is not one of a very deconstructive, moulded or squeezed form needing extra ordinary technology nor is its function of an exclusive type. It is a simple home build of brick and concrete. However, basic technology in terms of rendering of concrete and quality of workmanship of landscape, stonework, glass fixing, acoustics, artwork, etc helped us create a finely finished home.

HS : As mentioned above, a research on tropical architecture influenced the project in a greater way.

HS : The site being surrounded by high rise buildings was one problem while conceptualizing. And once conceptualized, certain client constraints were there while realizing it.

HS : Being self-satisfied, seeing the client satisfied and having been acknowledged at local and national platforms, our belief in the potential of the project and its philosophy strengthened, motivating us to place it on international platforms to come in touch with people of similar inclination and desires who believes in or wants to create such spaces.

HS : Being the debut project, it is while working on this project i learnt, how important it was to work on site and not just drawings and digital mediums. Coming back on the digital medium after site work, and then work in synchronization was my biggest learning. Also how to deal with people on-site is something I learned then.

HS : Being my debut project, this house to me represents the firming up of several convictions: that each building is unique by way of its users, setting, function, and more; that you will deliver quality if you care enough; that there is no substitute for nature; and that architecture can leverage the innate beauty of every material, by creating the right balance between less and more.