The Heart Of Siberia Urban Lighting Show by Pitch Bureau

We had the distinct pleasure to interview award winning designer Pitch Bureau about their original and creative Urban Lighting Show design work. Pitch Bureau is an award-winning industrial designer, that makes our world a better place with their original urban lighting show works. 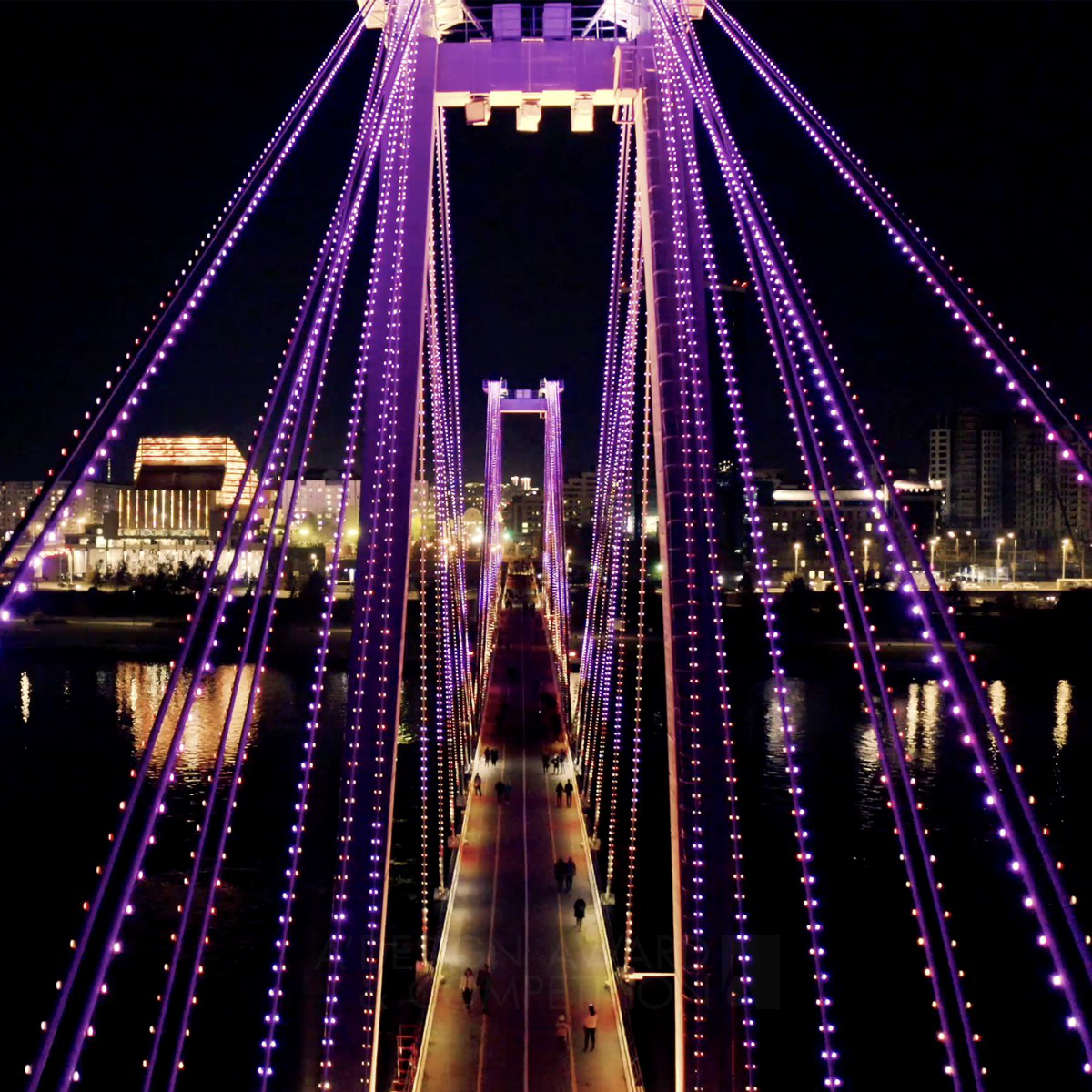 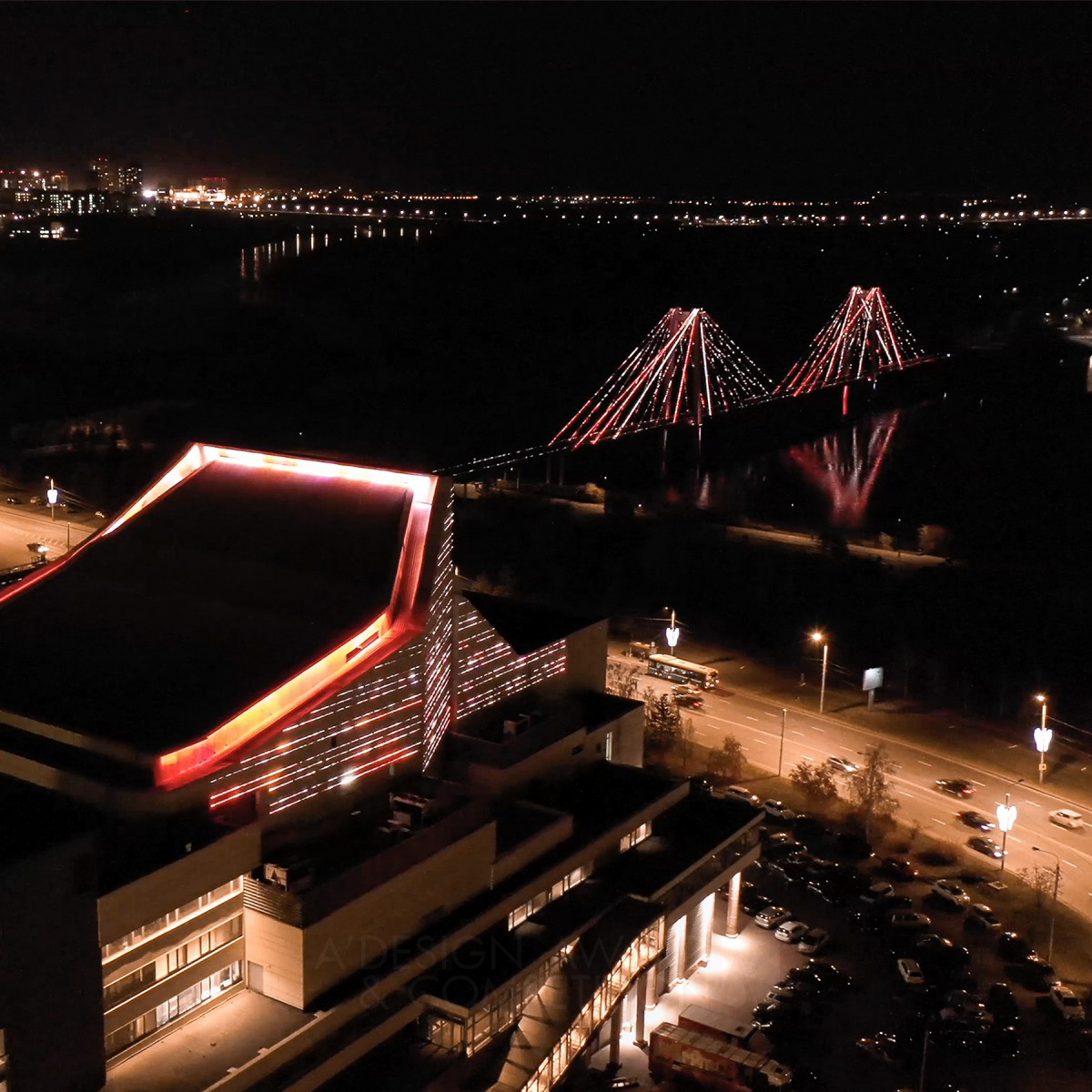 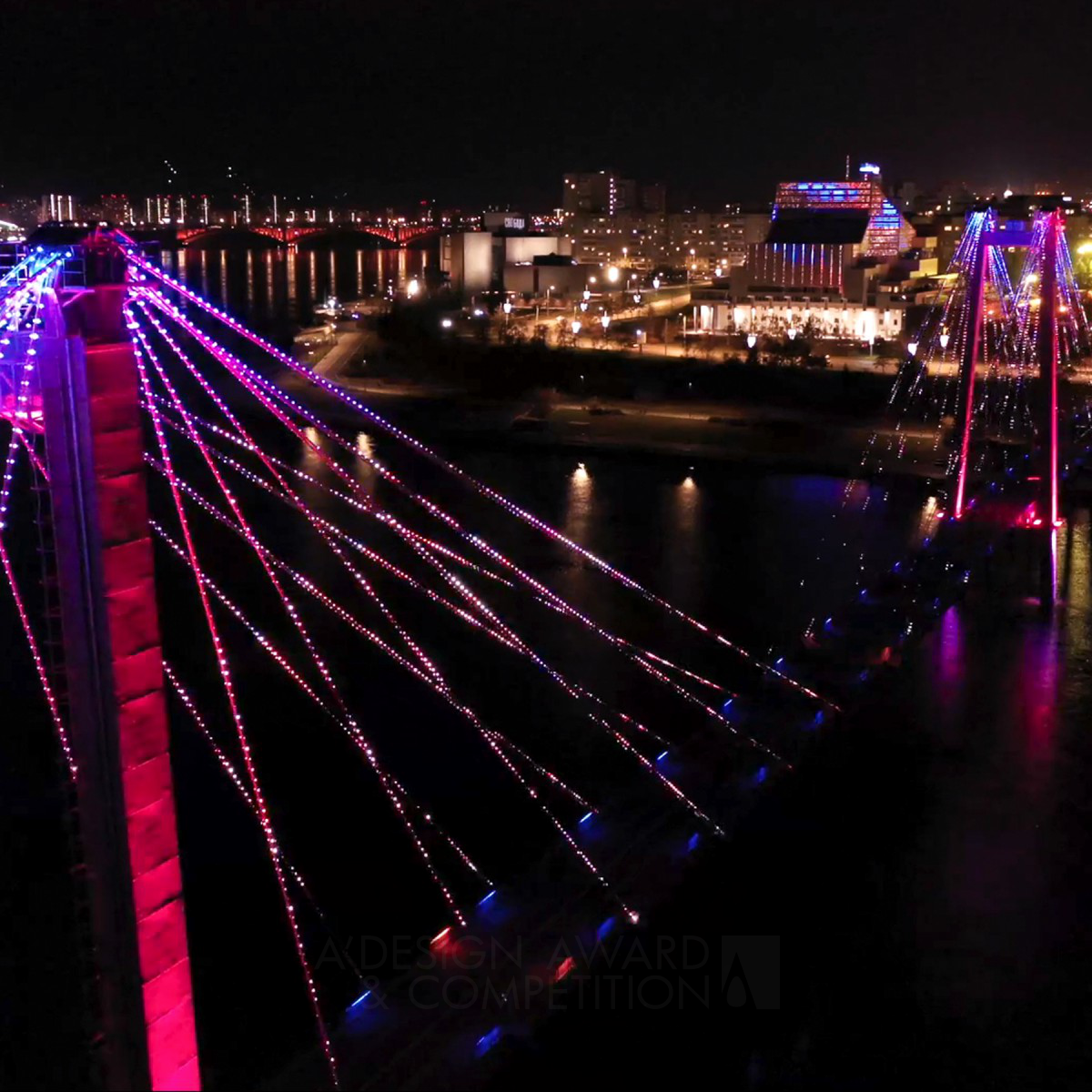 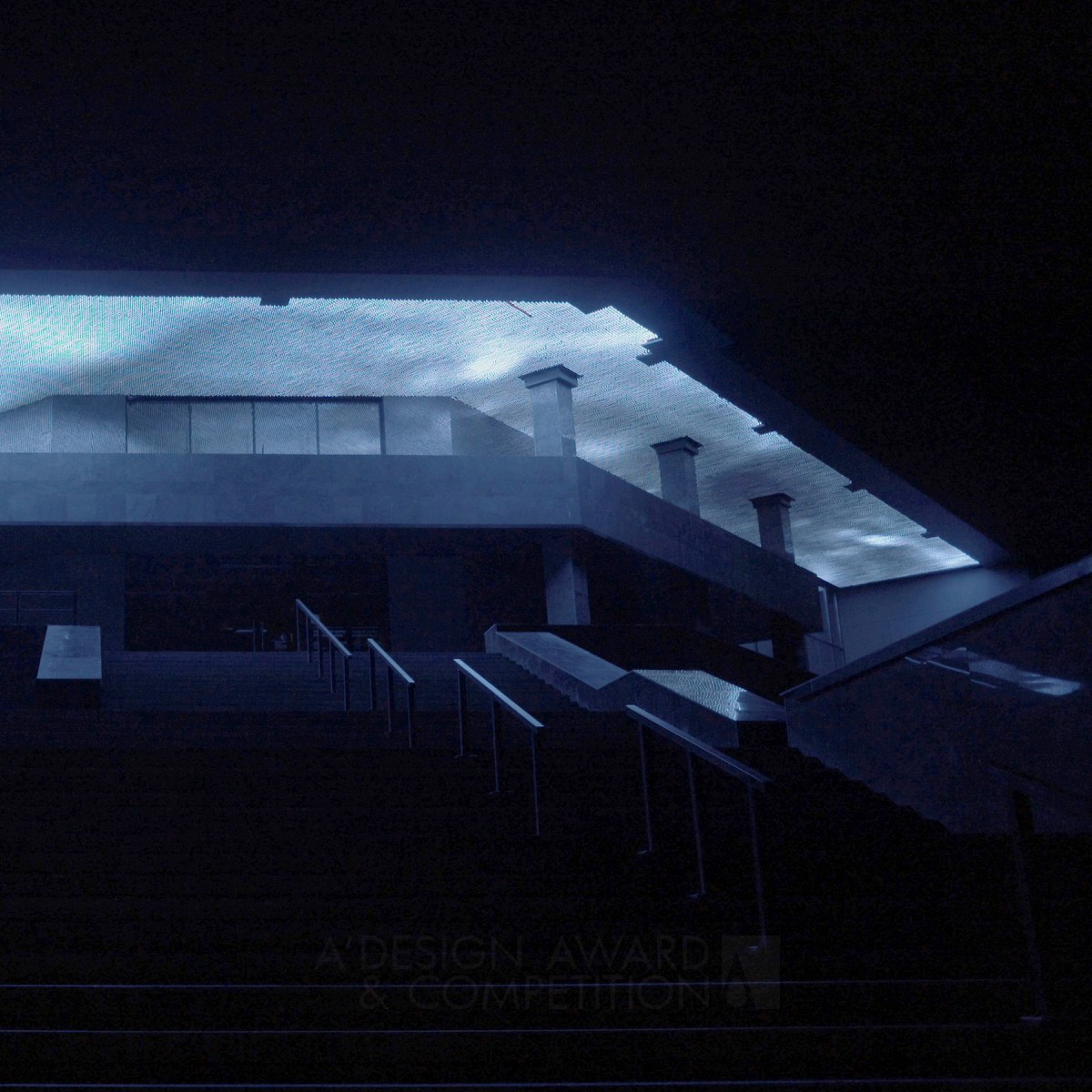 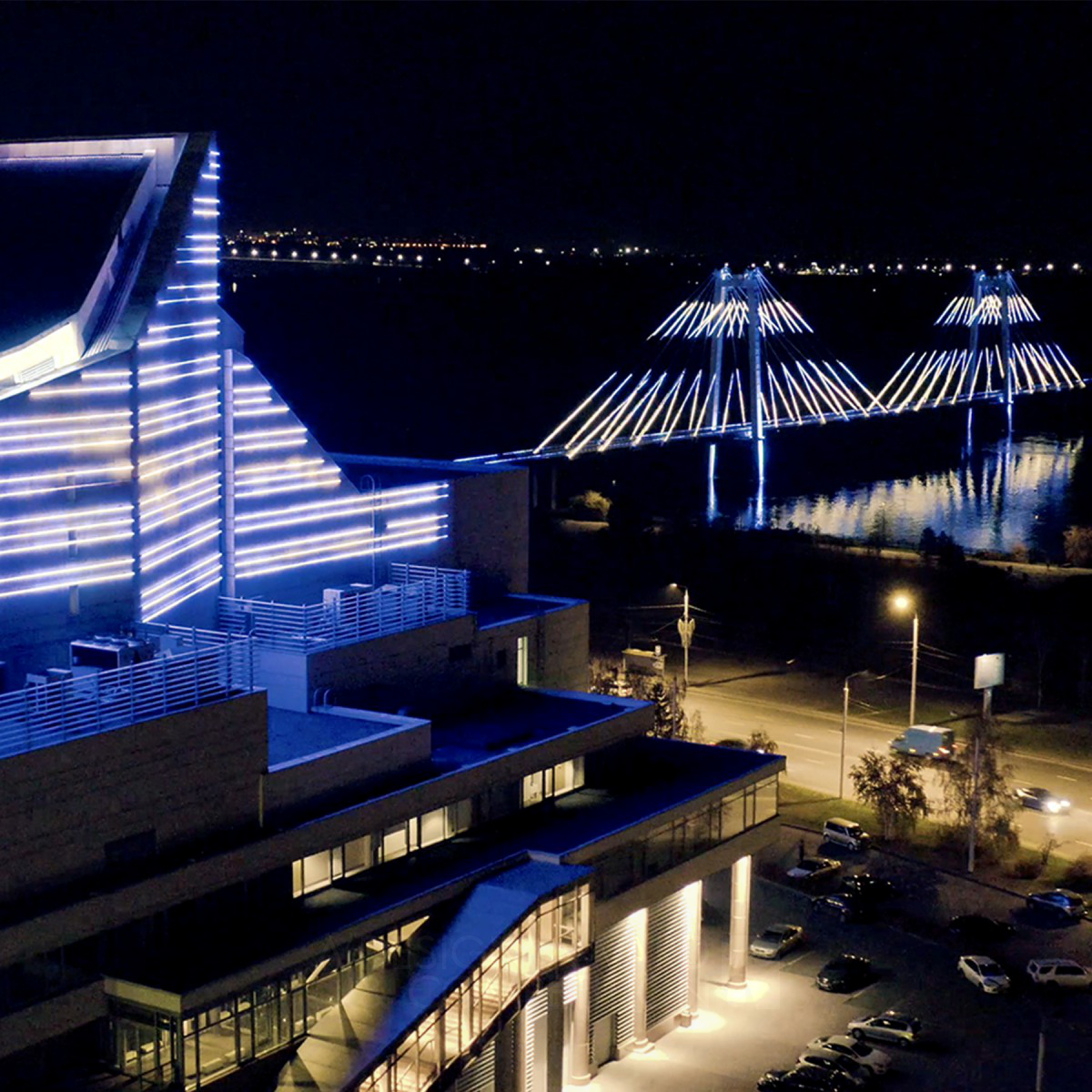 PB : Our aim was to revitalize the city's center by creating a permanent light/audiovisual installation with various scenarios played on the schedule. In order to do so we have decided to visualize genius loci of the Siberian city Krasnoyarsk and to present some of its sights, landmarks, and other peculiarities, such as the river Yenisei, taiga, mountains, hydroelectric power plant, etc.

PB : All sights, landmarks and other peculiarities mentioned above have definite familiar images. However, it was impossible to display clear images on the architectural objects (except media facades) because of the physical limitations of the working surfaces and different points of view. So, our main idea was to express those definite familiar images through dynamic abstractions. In a sense, such approach, that is also called 'emotional design', develops the ideas of Wassily Kandinsky and El Lissitzky.

PB : It was not the first time we have been engaged in the transformation of the urban environment in Krasnoyarsk, so it is important for us to maintain the relationship with the city. We also hope that such an example will set a trend for other cities, so they will turn to their inhabitants and their needs, making cities more comfortable places for living.

PB : We developed our first project for the urban environment of Krasnoyarsk in 2018. It was implemented on the architectural complex on the junction of the river Yenisei as well, so we already had some ideas to be fulfilled. It took us about 6 months to implement the first project, and the second one was conducted in 3 or 4 months.

PB : The general framework was commissioned by the city administration, however our team created the whole conception of the lighting, inspired by the Krasnoyarsk region and its culture. This design was based on the show's first version, so we understood the set up better and took in the account all its pros and contras.

PB : We at Pitch were in charge of the technical design and automation. It has allowed for the remote show upload and control so we have produced the full scope of content related work (from idea to content creation and uploading) ourselves. We do not have the rights for the show as they were passed to our client accordingly to our contract.

PB : We love challenges. Actually it was the first stationary urban light show in Russia and as far as we know there are only around 5 or 6 such shows do exist in the world. It is a site-specific and time-based design. And it was a possibility we couldn't turn down.

PB : Before we started to develop our own idea, we had reviewed similar shows run over past 5 years all over the world. However, this project was unique as it incorporates different media (light, LED media facades, sound) across 3 objects located closely to each other (a bridge, a museum and a city music hall). So we had to create a brand new concept, especially keeping in mind local context. Moreover, we had already worked on some urban environment project in Krasnoyarsk (e.g., earlier that year we created a video-mapping show on the facade of Krasnoyarsk Pushkin Drama Theatre based on an ancient legend of the Evenks, indigenous people living in the Krasnoyarsk region for thousands of years). This experience helped us to elaborate new concept of the lighting show.

PB : Locals and tourists, including those who intentionally visited the city to watch the lighting show - which were quite a few.

PB : The unique and highly specific set-up, weather and environment conditions (with harsh winds and temperatures plummeting below -40 C in winter), and the fact that presented abstract images are deeply rooted in the genius loci of the city and region, its cultural, industrial, and natural heritage.

PB : Krasnoyarsk is an informal capital of Siberia and is often referred to as "Siberia's Heart" by the locals. We liked the name of the show “The Heart of Siberia” as it is also a kind of umbrella notion for all main ideas we wanted to present in our show: “The Yenisei River”, “Krasnoyarsk Pillars”, “Taiga”, “Gold Rush”, “Mountains”, “Snow and Ice”, “Hydroelectric Power Station”, “The Steel Mill”. As we created a concept of the show using maxims of emotional design, it was clear that the title had to refer to senses rather than to reason.

PB : We used some 3D and motion graphics software to create general visualization and hand-written code to develop a lighting script and to program lighting control consoles.

PB : From the technical part we have employed some original technical solutions - eg, placing light features on the bridge's suspension cables and custom automation solutions. The most unique aspect from the creative part was to present some of Krasnoyarsk sights and landmarks that have definite familiar images through dynamic abstractions.

PB : One would never make this design without a team, on its own, as it is truly multidisciplinary. We mainly did it in-house, as Pitch is a creative engineering bureau which currently employs more than 30 highly qualified professionals in various fields, including engineers, concept artists and 3D modelers. However, we have also employed some specialists on out source, such as a composer, who wrote the music score for the show.

PB : Technology is essential for this project. Architectural lighting complex included 15 000+ RGBW-controlled pixels, 2 000+ linear RGBW lamps, 2 LED media facades. They formed a system of 200+ DMX universes with over 100 000 DMX addresses. More than 100 automatization switchboards were designed and assembled to control that complex. 13+ km of cables linked those elements into a single network. Significantly enough, the system did not require manual operation: we have prescribed several scripts for its operation, which were linked to a calendar and were run automatically according to a schedule.

PB : Each of our projects necessarily begins with a preliminary study. We normally set up a research team for any project. An extensive research allows to avoid epigonism: it is important to create novel combinations able to awaken new meanings.

PB : There were some physical limitations of the surfaces we worked with which made it impossible to display clear images on the architectural objects. These limitations defined the uniqueness of the whole project – the main challenge was to express some definite familiar images through dynamic abstractions.

PB : The project got quite an overwhelming response at the time. So we were approached from different sides to submit it to some competitions, which we did, as we just wanted to share and present it to the international public.

PB : This show has proved once again the importance of collaborative working – it is an old truth, though. Collaboration is the only way to create and implement the most daring and ambitious projects.

PB : The world we live in is rather chaotic, and chaos offers a lot of ways to make some of its parts orderly and meaningful. We love to see changes this project implementation have brought to the city as it has revitalized the city center and instantly became Krasnoyarsk landmark.