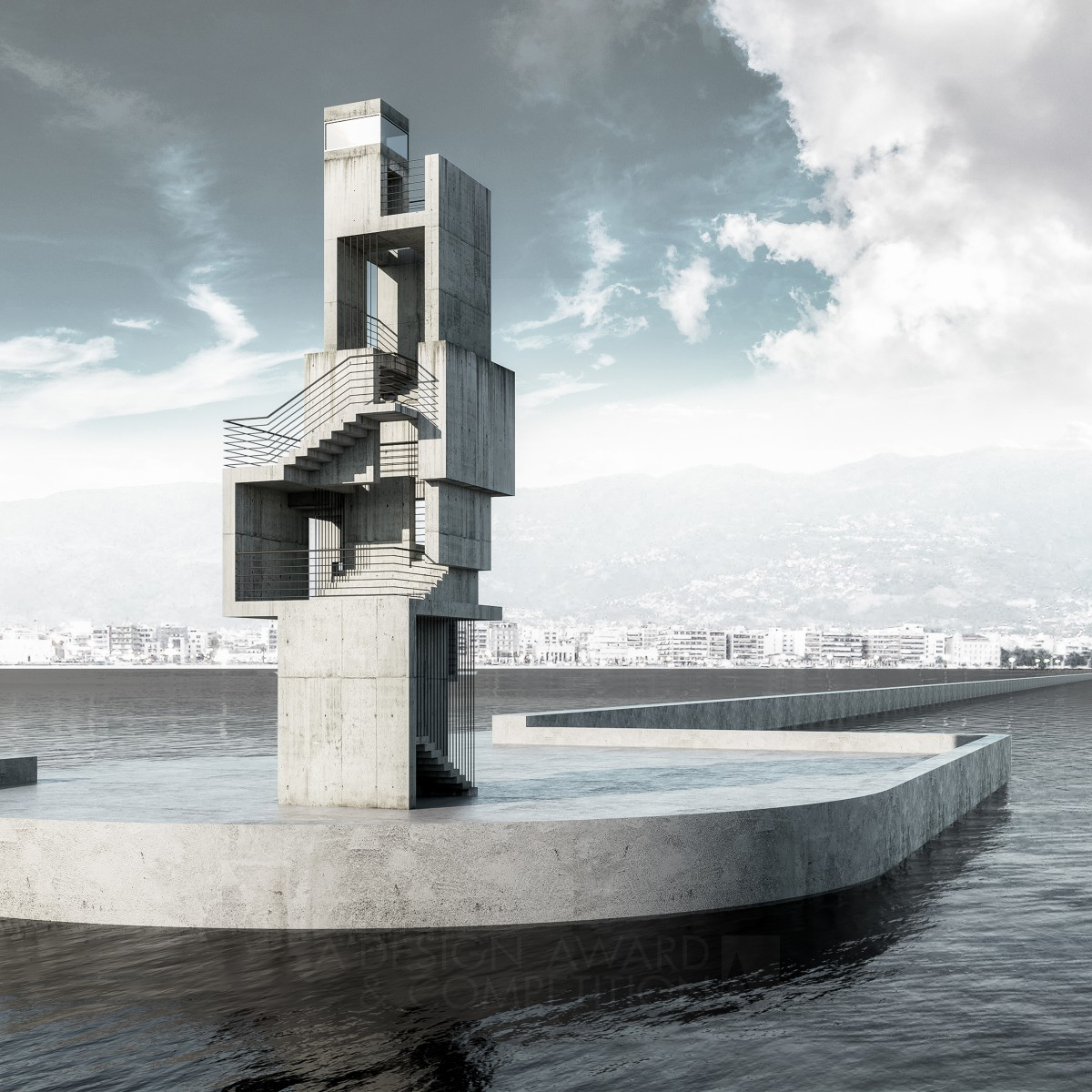 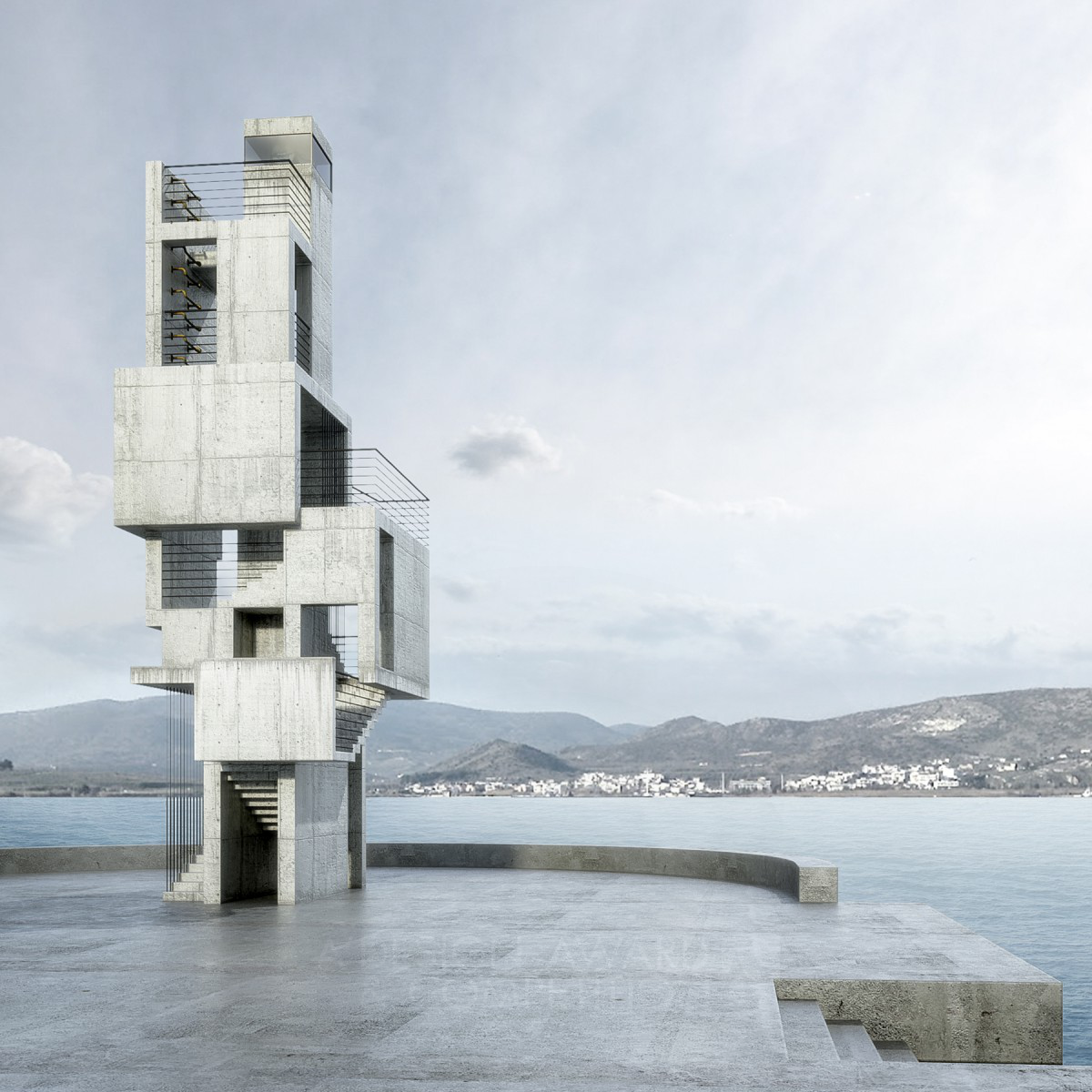 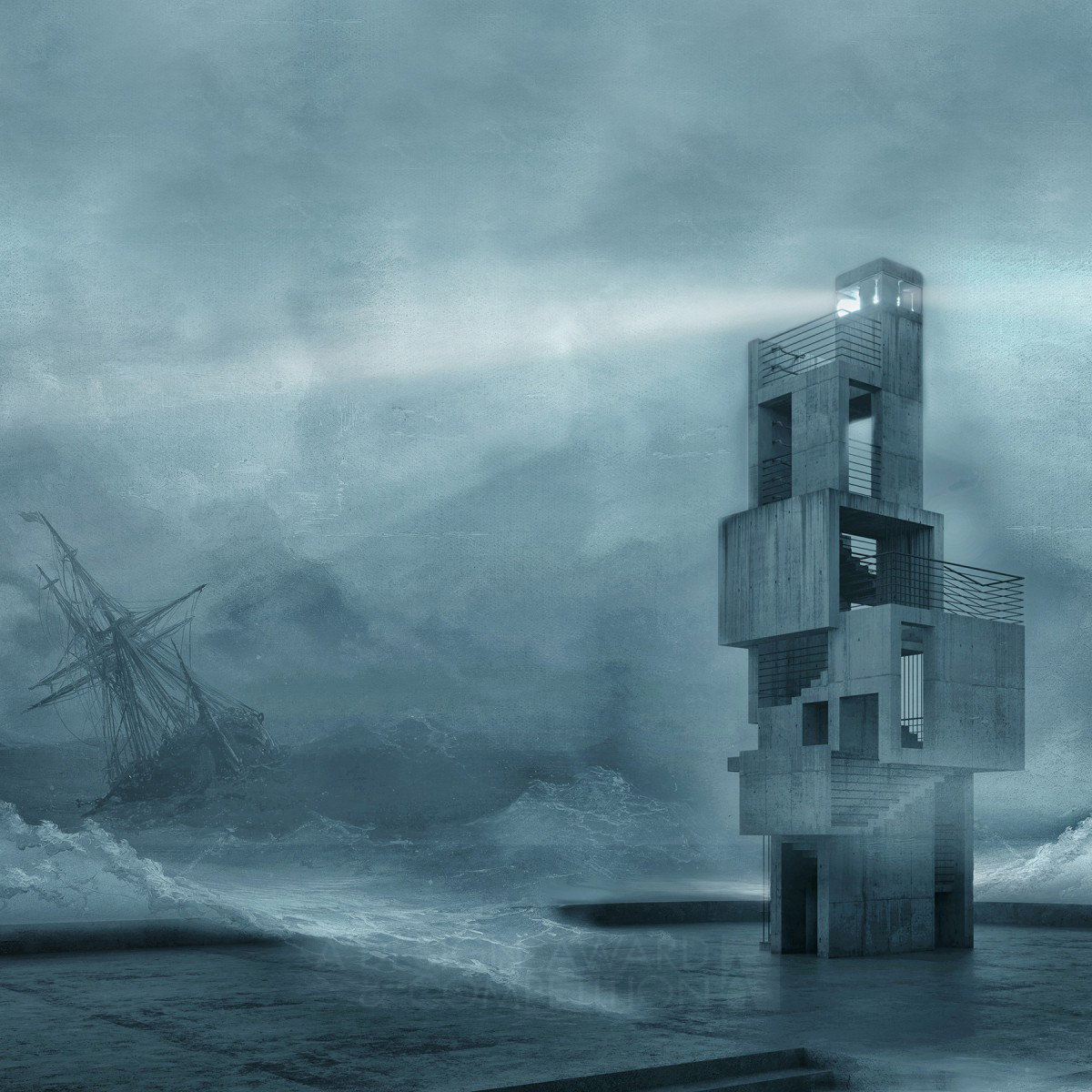 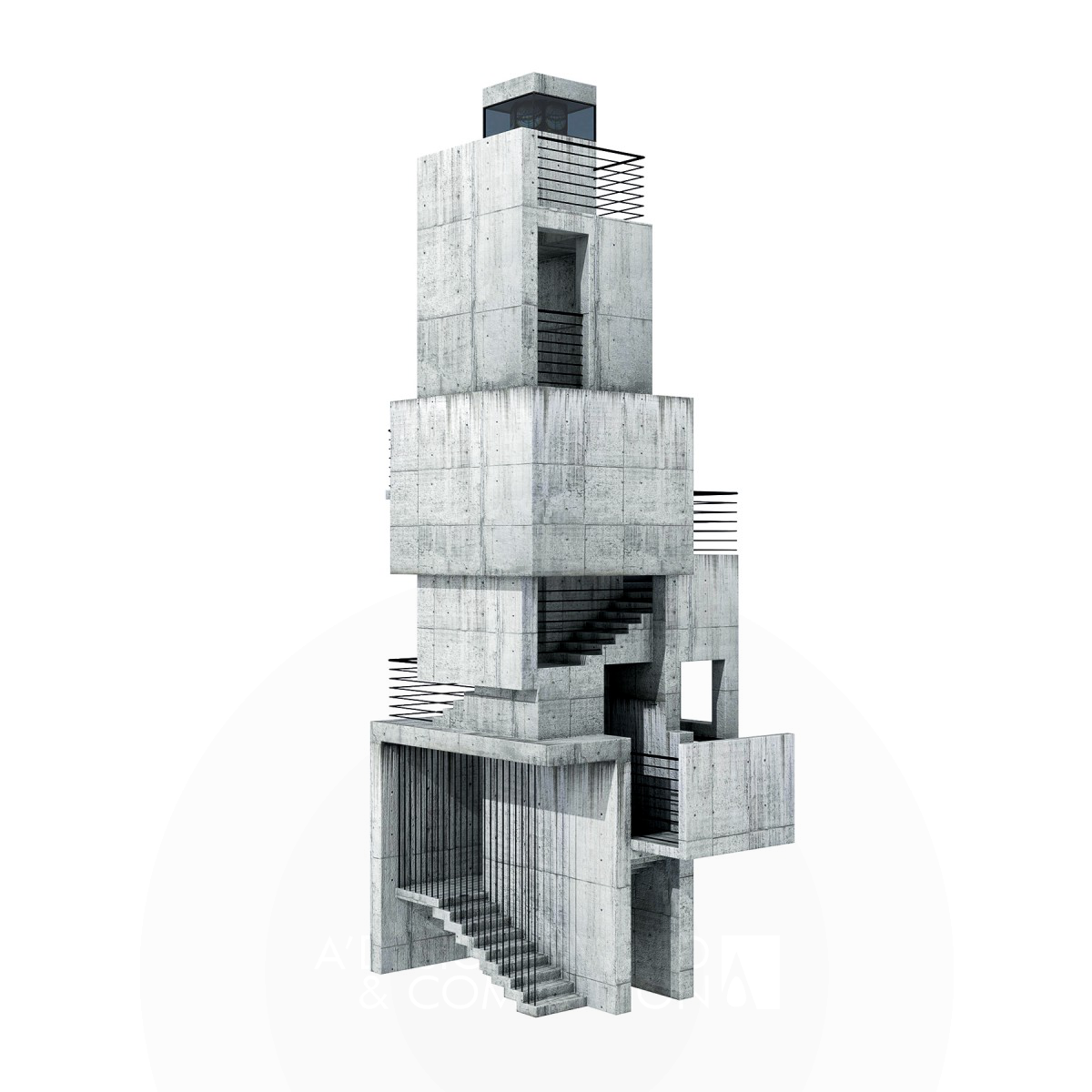 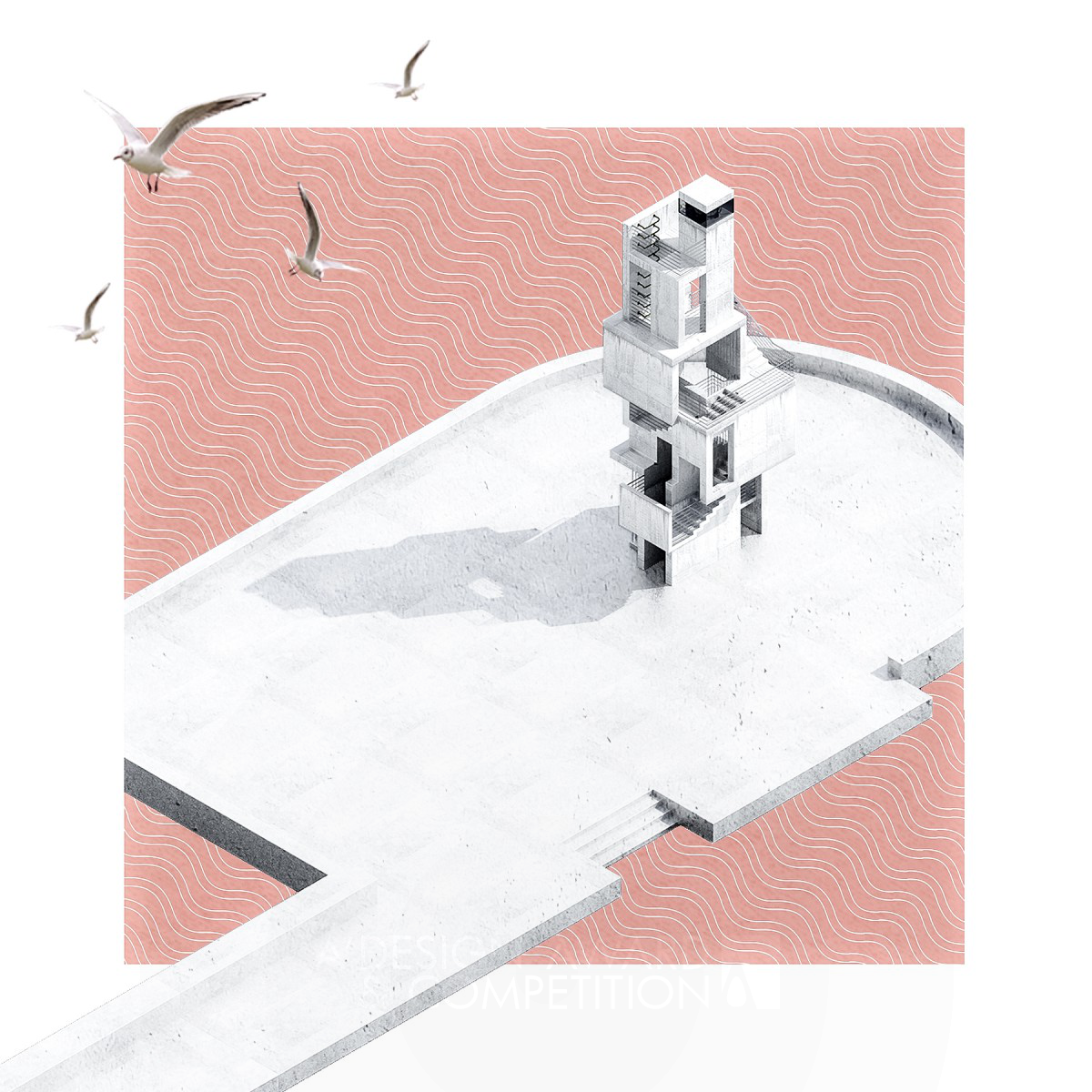 VM : The project was inspired by the so called Aleorion of Xerxes, built around 480 BC and once stood on the reef Lefteris of the Aegean Sea, Greece. It is considered as the most ancient maritime safety structure in the world, built 250 years before the Lighthouse of Alexandria. The Dolomite stones, used for the construction of the lighthouse were placed on top of each other forming a tower that functioned as a warning sign of the reef and the nearby very shallow waters. The idea and the main principle of Cubes Aleorion was to create a modern interpretation of the aleorion and to transcribe the essence of the ancient structure to a modern landmark tower.

VM : The main focus in designing Cubes Aleorion was to create a piece of architecture that could both remotely resonate instances of ancient maritime architecture and the same time echo the materiality, the form aesthetics of the modern urban environment of today and the long history roots of the city and the port itself, as well as the character of a maritime nation sailing the Mediterranean for thousand of years.

VM : Cubes Aleorion Lighthouse is proposal for a landmark structure for the port entrance of the city of Volos, Greece. Speaking from the architect's point of view, there can't be any real future plans for a concept project that has already been delivered to public audience. It is entirely up to the citizens of the city and the competent authorities if such a project would be a meaningful and valuable addition to the urban landscape of the city.

VM : Including research, tons of drafts and concepts designs, the actual designing process and final renderings and presentations, I would say about 7-8 months.

VM : No, the design was not commissioned by anyone. It was a personal humble attempt for a contribution to the urban environment of the city I live and work in.

VM : No, Cubes Aleorion is not for sale. It is just a personal proposal for the port and the city of Volos, Greece and it is entirely up to the citizens of the city and the competent authorities if such a project would be a meaningful addition to the urban landscape of the city.

VM : The absence of a modern lighthouse structure at the end of the 1 km long breakwater of the city port of Volos, as well as the belief that such a structure could act as local landmark.

VM : Definitely. The guidance, advising and critique of architects Theoklis Kanarelis and Konstantinos Manolidis was invaluable, to say the least.

VM : There are no customers for Cubes Aleorion. It is an attempt for a small contribution to the public architecture of the city.

VM : The name comes from the ancient greek word, dating back to the age of Homer, "Aleorion" [etym. < anc. Greek: ἀλεωρή “avoidance, to avoid”] meaning a navigation mark to show reefs or other hazards.

VM : Each level of Cubes Aleorion frames a different viewpoint of the bay, thus creating new perspectives of the city, the port, the sea and opposite coast of the Pagasetic Gulf. The casual walk on the paved breakwater is enriched with a new end-destination, encouraging the extension of the city waterfront promenade onto the sea.

VM : The intention was to leverage simple and well established technology. And that is pre-cast reinforced concrete and metal detailing.

VM : The real challenge was to create an architectural form that respects various factors at the same time, such the landmark position of the lighthouse at the entry of the city port, the materiality and aesthetics of the urban environment and the long history roots of the city and the port itself. Another challenge was to mange the height restrictions along with the need of an internal staircase and the aim of silhouette as slim and tall as possible.

VM : Submitting to an international competition was a "test-drive" of an otherwise completed architectural proposal, with the purpose of getting an international feedback and point of view on a local project.

VM : Designing and exposing to a broader audience an architectural project of public interest, re-confirmed the obvious: Public interest projects are always (and should be) a matter of public evaluation and critique.