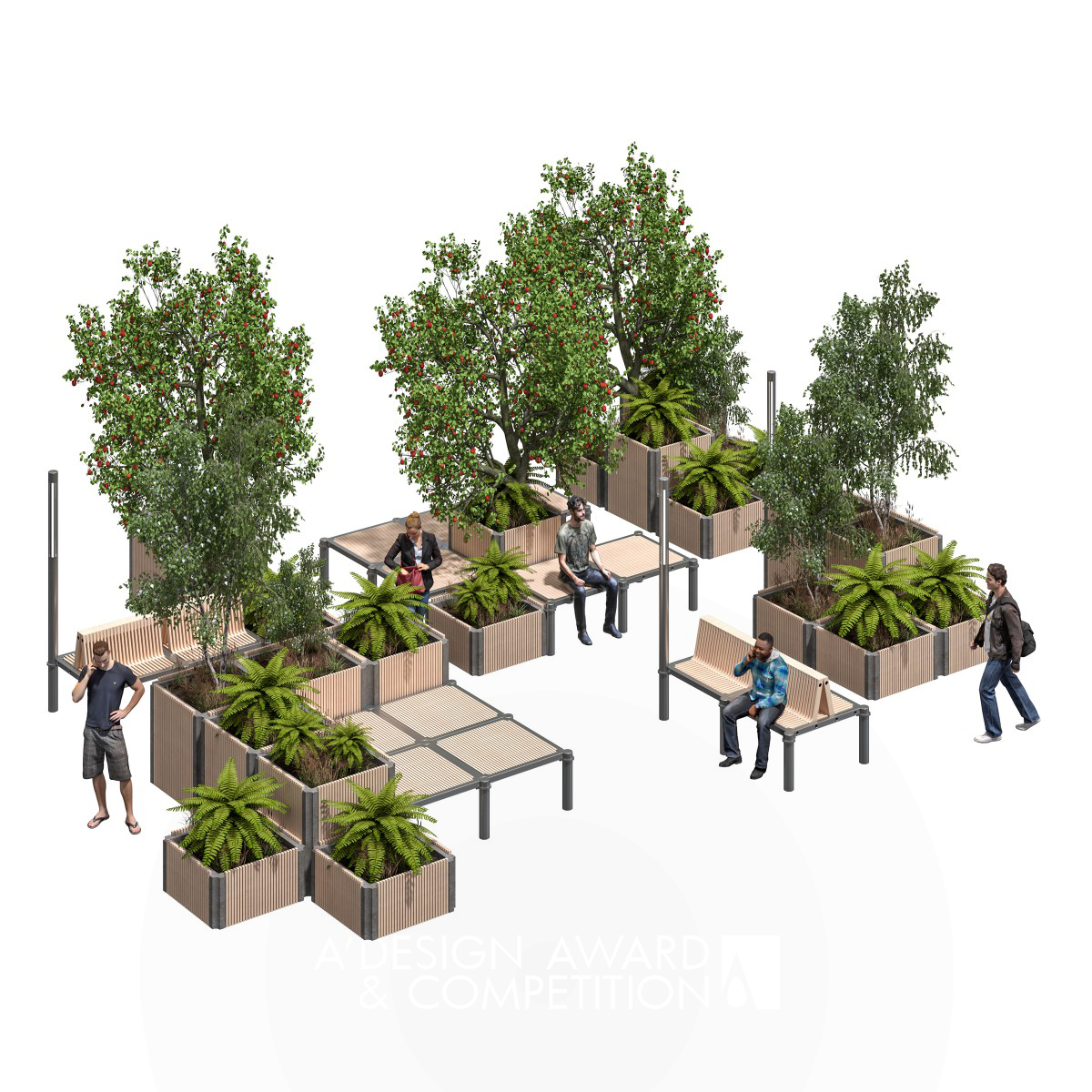 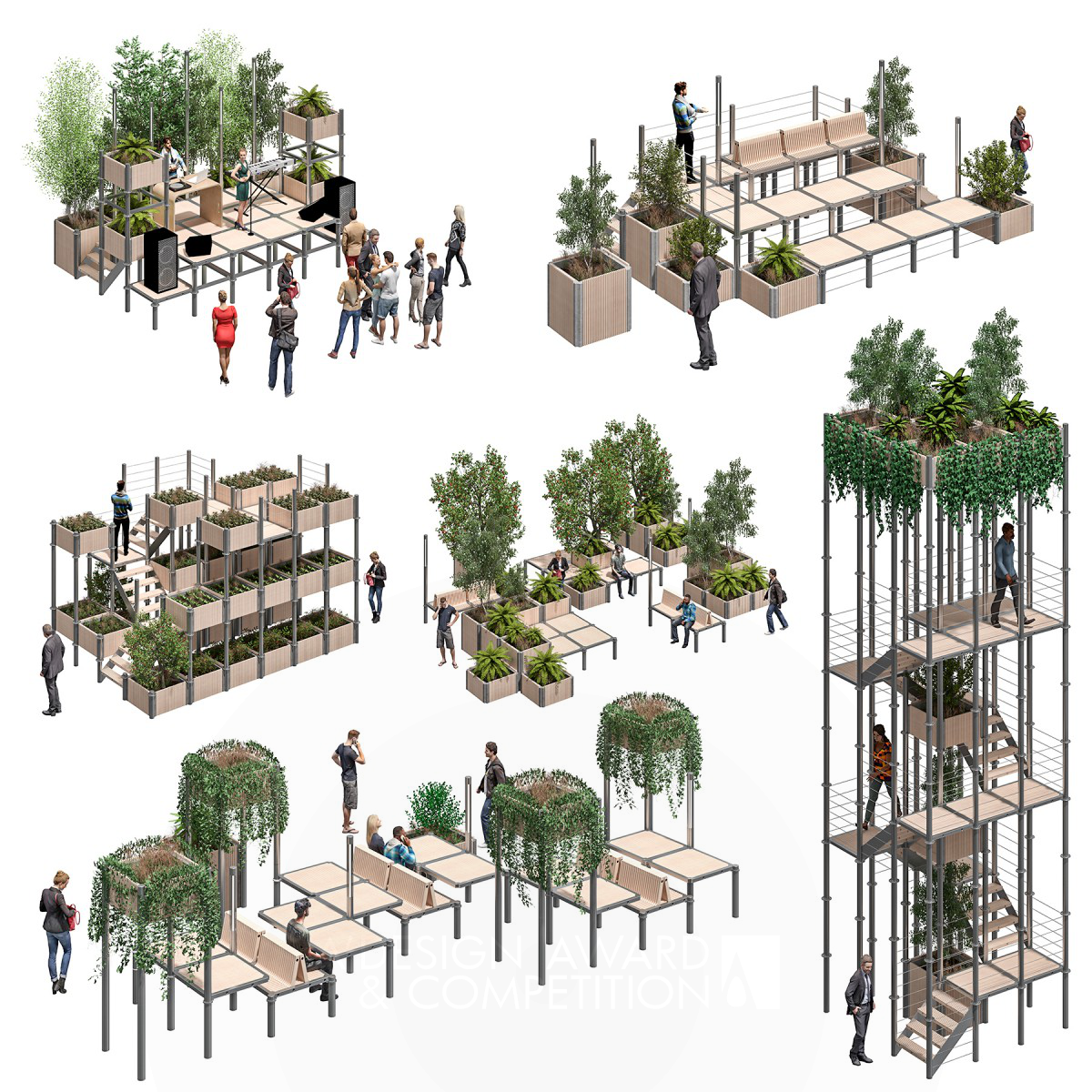 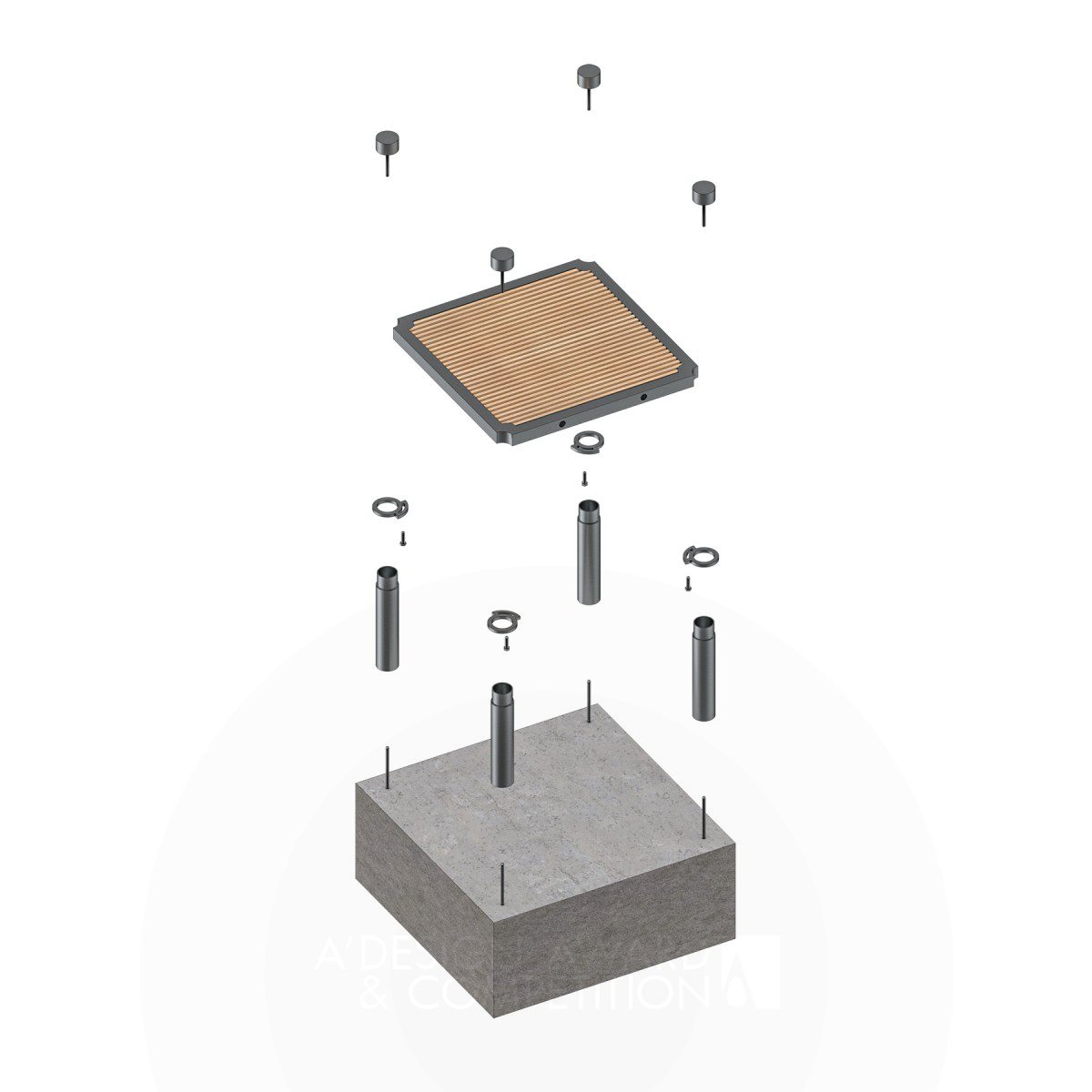 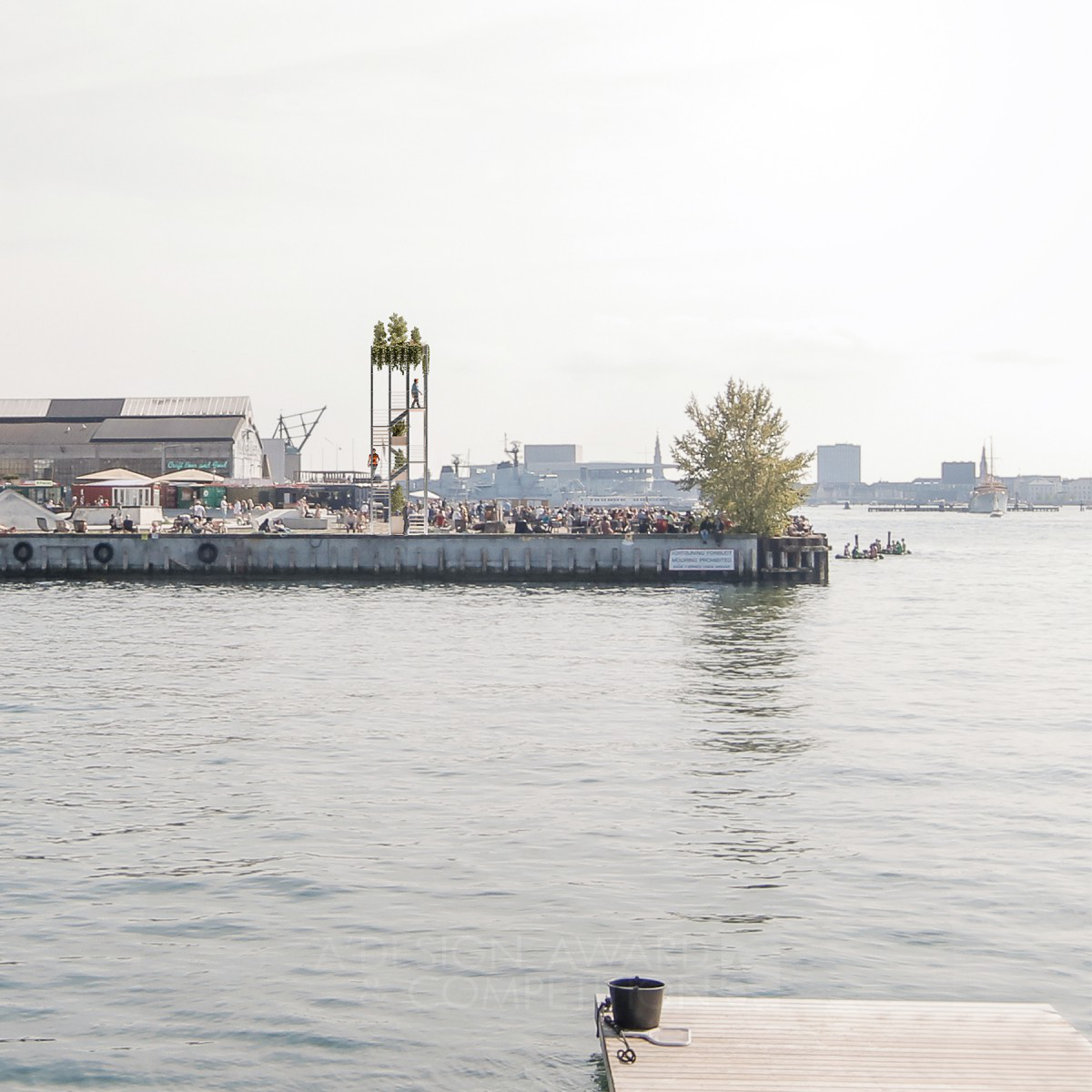 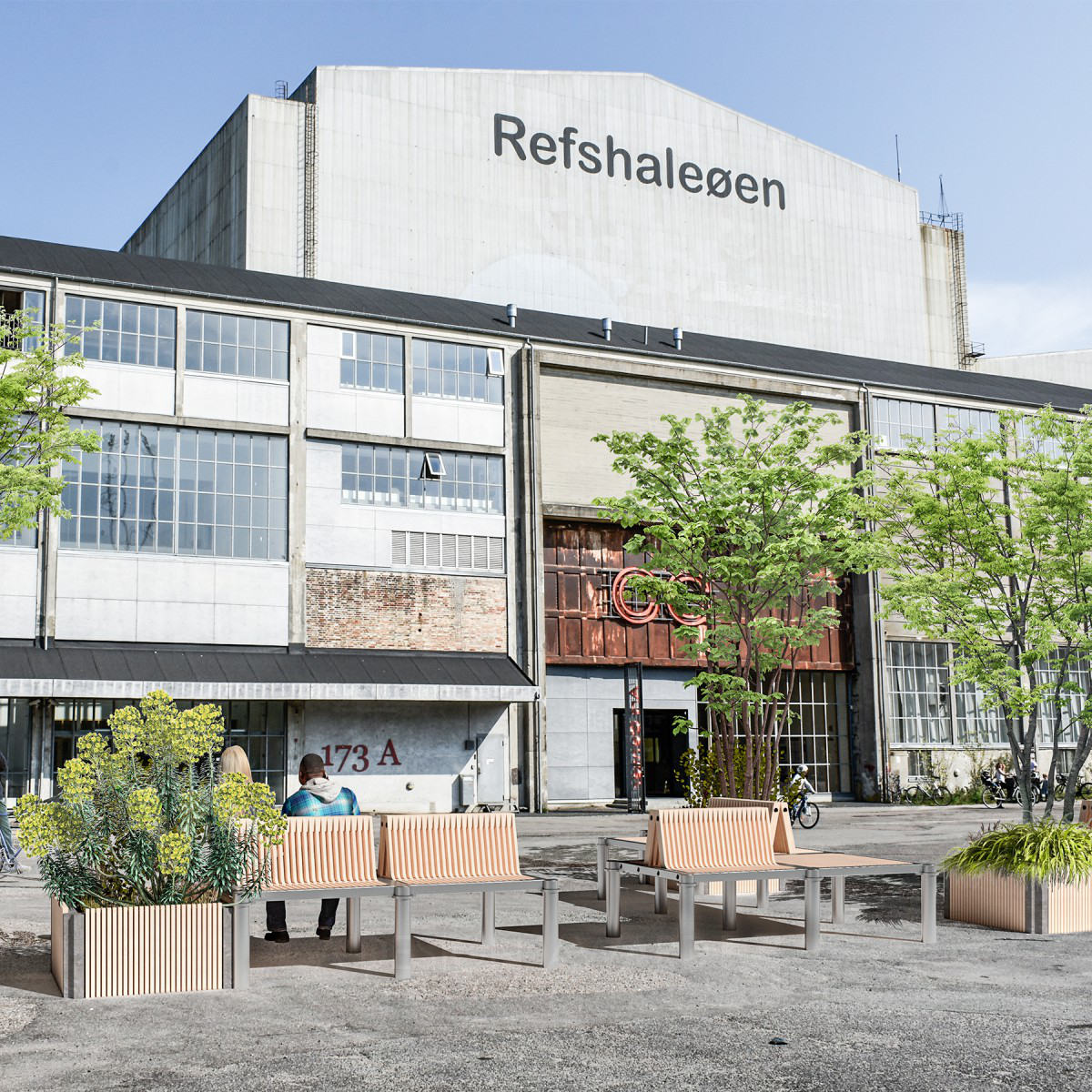 MSAAG : The main principle behind the design is to have an adaptable system able to fit different programmes and contexts needs. The family of urban furniture “1X1” can be scaled up and down in three dimensions, thus filling up the void space in an urban fabric. There were three main inspiration sources starting from scaffolding structure and Rubik cube to Dieter Rams ‘‘Vitsoe 606 Universal Shelving System’’.

MSAAG : We wanted to imagine a modular three-dimensional grid made out of simple street furniture elements. We thought about the production and assembling process, likewise keeping low manufacturing and maintenance costs. Most of the components are standard in heavy production.

MSAAG : Since the beginning we planned to realize this project in the area it was designed for as an initial source of inspiration. We analyzed an island on the southeast of Copenhagen-Refshaleøen, which was in need of this kind of intervention due to a multitude of reasons, as this post-industrial area has never seen a proper public space regeneration. Besides that, the design can be adapted to any area, need, or city around the world in an appropriate setting. For this reason we would like to see the project held in production by a company and hopefully this might just happen thanks to the amazing opportunity we are receiving by the A Design Award team after winning the golden prize.

MSAAG : The design process went through different stages for several months. The main phase before the final submission was around 3 months long. Time was stretched due to the lack of time as we were working in an architecture firm at the time so we had to spend many long nights on it...

MSAAG : I guess it was the combination of inspiration and the surrounding influence such as working in an architectural firm at the time as well as other local Copenhagen design firm ideas rubbing-off on us.

MSAAG : We actually plan to sell it or lease the production rights.

MSAAG : If you mean street furniture, then we would suggest that we were looking for the opportunity to work on something together where we could join our shared knowledge and skillsets of Landscape Architect and Industrial Designer. Furthermore we wanted to create something that we could potentially implement and get built. Otherwise, it was probably the time we spent on Refshaleøen island. For the record, it is one of those unique gems you can find in different cities around the globe. And as we continued to occasionally visit this place, we got more and more fond of it, hence we started to think that it might be interesting and fascinating to design something for the area as it has so much potential and need for various design interventions.

MSAAG : We love the approach of Dieter Rams and his ideas on Good Design. In the beginning we followed the 606 shelved system designed by Rams thinking about scalability and modularity and since then we kept those guidelines along with us.

MSAAG : The client could be anybody from municipality wanting a medium-scale public space intervention, to a small business owner who might be in need of some individual street furniture elements outside of his coffee shop. While the end-user would be anyone passing by our design

MSAAG : There are plenty of other modular street furniture families, however, most of them can only scale up horizontally, while we can grow vertically. Moreover, our design uses frame structure as a means of assembling various modules together while others join directly. As a result of these design aspects our furniture family has fewer restrictions and limits, thus capable of adapting and developing into an entire small scale public realm with various potential program options. Lastly, due to the frame structure and assembling methods the design comes even closer to a truly portable street furniture set, which is easy to transport and can be deployed according to the needs.

MSAAG : 1x1 simply refers to the 1 to 1 meter grid system on which the whole design is based upon.

MSAAG : Initially we were using analog sketching and then we moved on to digital 3D modeling in order to start testing the idea.

MSAAG : Most likely its the aspect of true adaptability and scalability. It works as a stand-alone individual furniture peace as well as a full programme structure such as a pocket park or an event stage.

MSAAG : So far it has been an isolated process with only two of us having input on the design. Though we had a great amount of support from our friends and colleagues from the office where we used to work.

MSAAG : The role of technology would be to improve the manufacturing process ensuring an easy and low cots end product. Obviously further technological applications should be analyzed. But overall as a simple example we would like to see a convenient process method where a site such as Refshaleøen with its multiple facilities and programs would continually develop and progress its outside spaces with the help of 1x1 modules according to its real-time needs such as seasonality and various events. It could be a sort of dynamic urban ecosystem where modules could assemble into one large structure during a one a year music event, while otherwise group clusters of various programs which could exchange and improve by sharing individual elements.

MSAAG : In the early stages of our design process we conducted a site analysis as a source of inspiration as well as a link to real-life restrictions and issues. For instance, as we observed and analyzed the site we found the aspect of seasonality or a relatively quickly changing environment with different events, programs, or other circumstances requiring a spontaneous adaptation in a specific place within the site.

MSAAG : Well since we aimed to reduce the number of elements, materials, and fixing methods it was challenging to find ways to reduce additional parts in order to keep it as simple as possible. Otherwise the significant challenge was time management as all the work was done after office hours and weekends.

MSAAG : Well to begin with we started our design with a competition in mind. We wanted to participate in the competition as it could give us a better chance to actually realize our ideas as well as give some design recognition.

MSAAG : It is quite difficult to measure as well as to be self-critical about these sorts of aspects, but in a quick sum up we learned more about attending online design competitions as well as got better insights about modular systems.