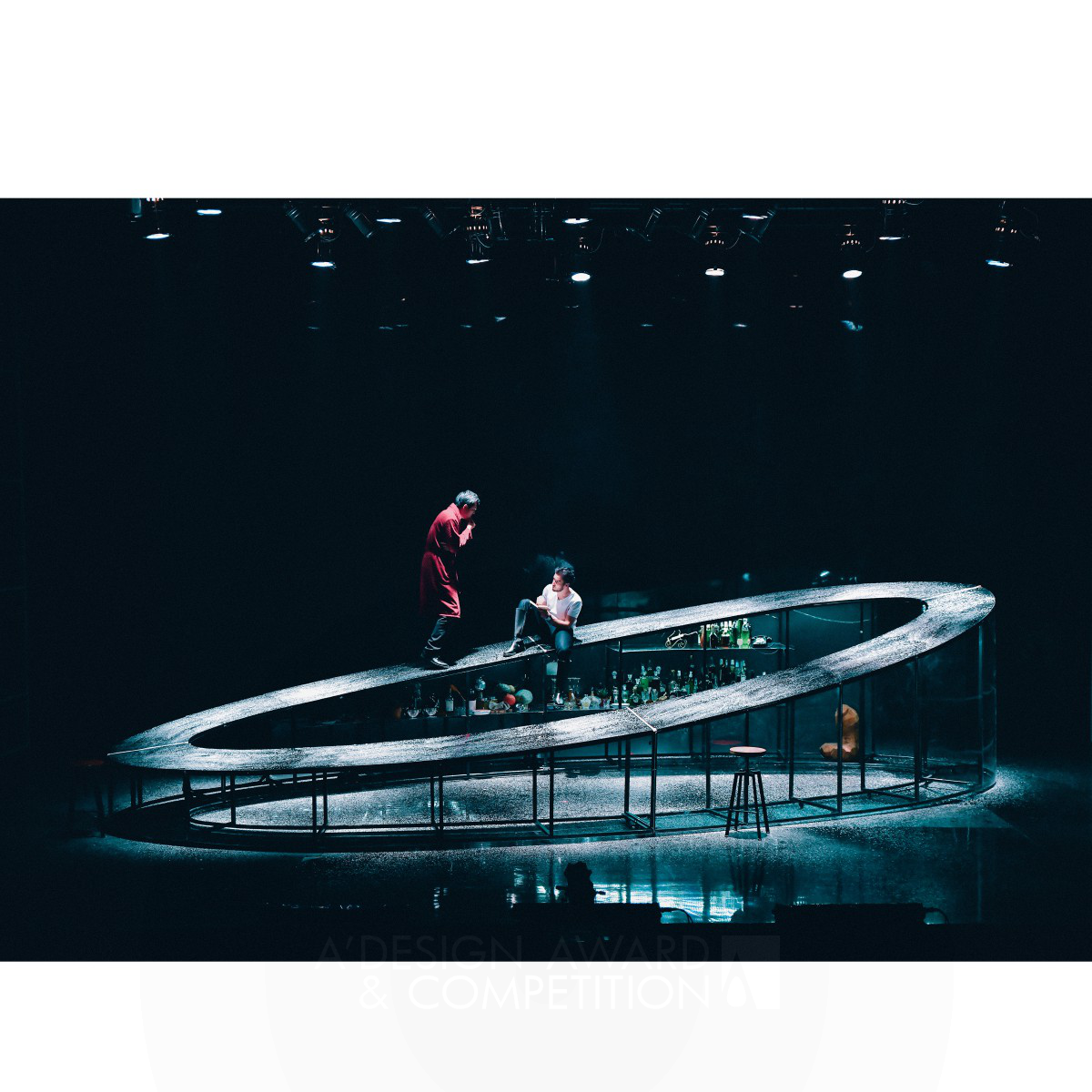 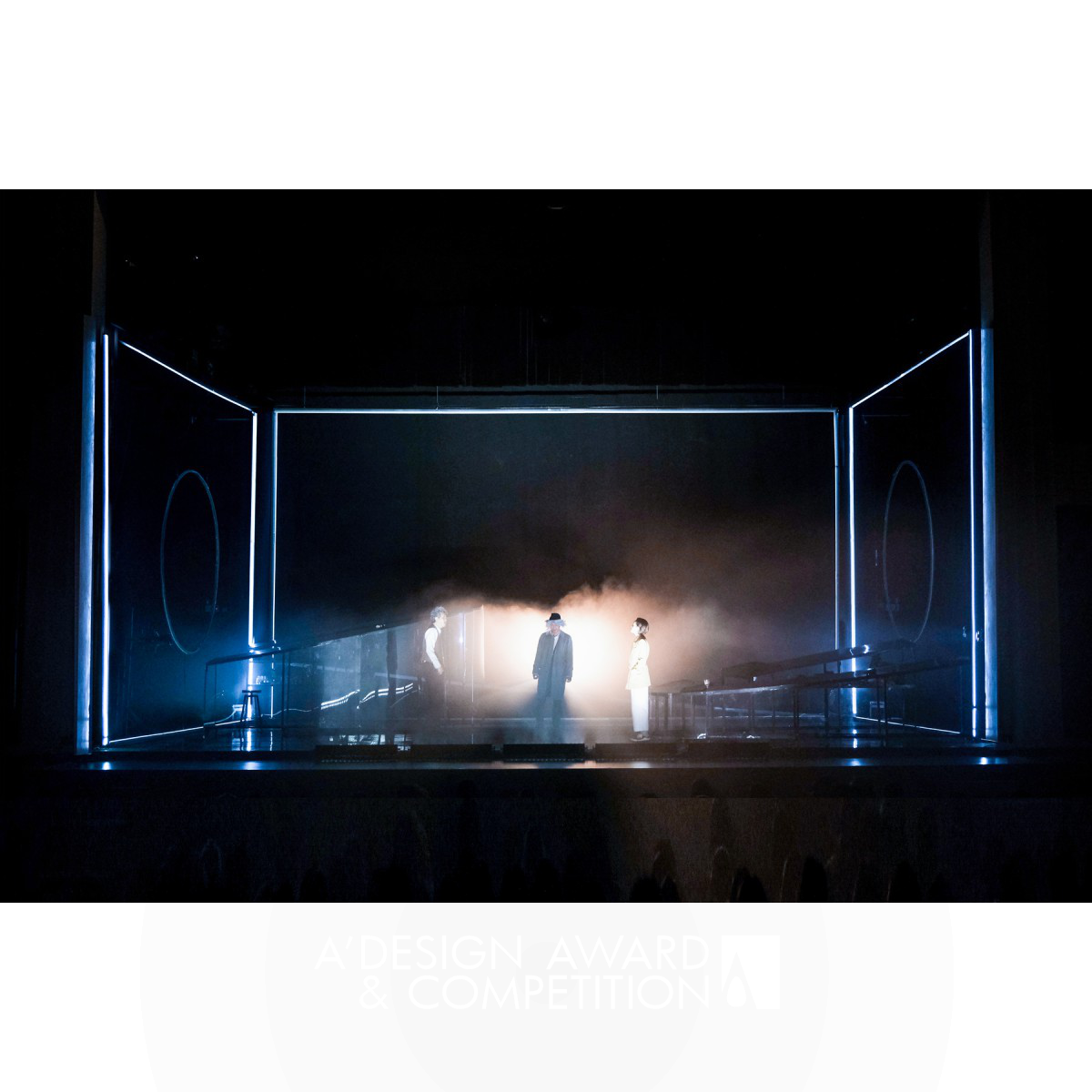 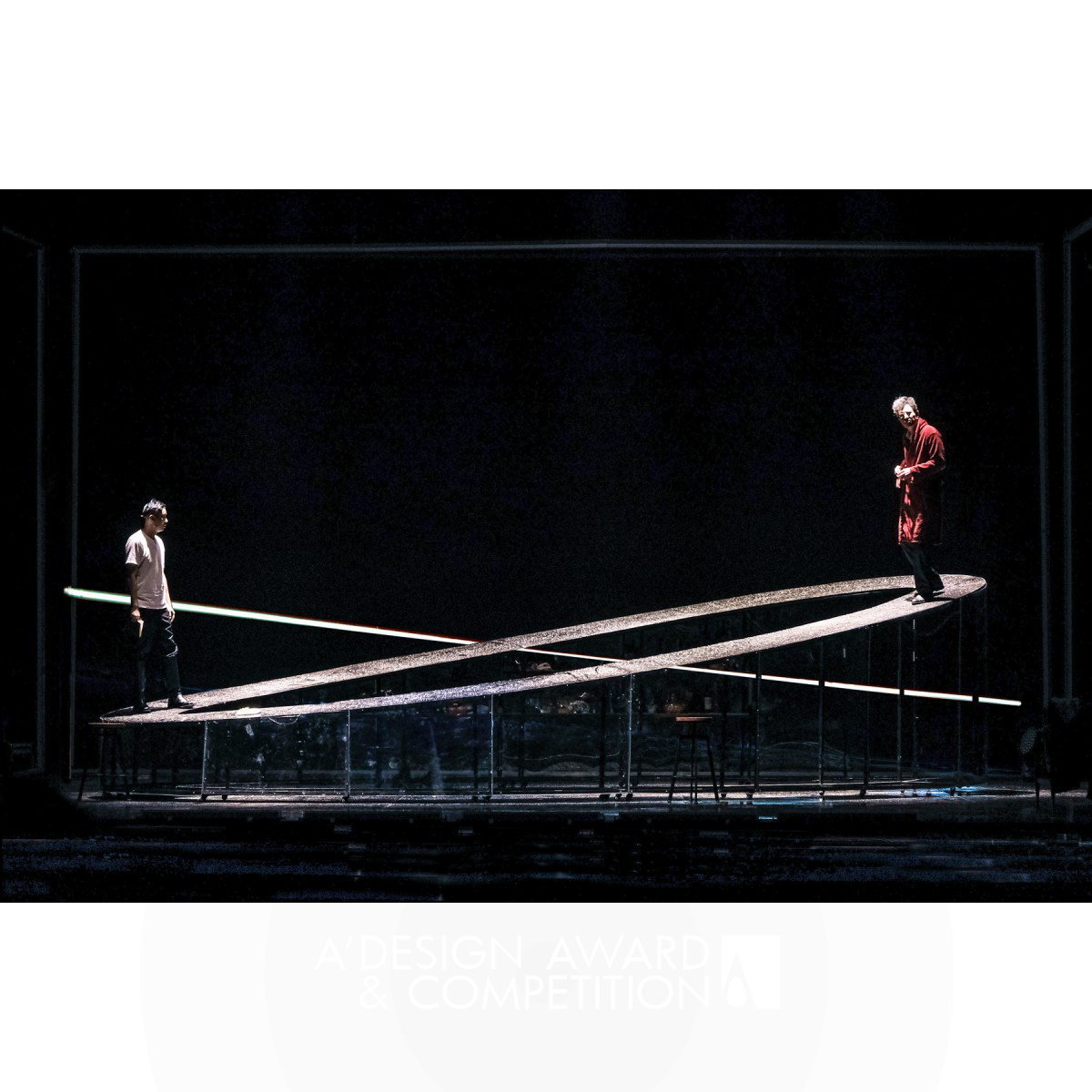 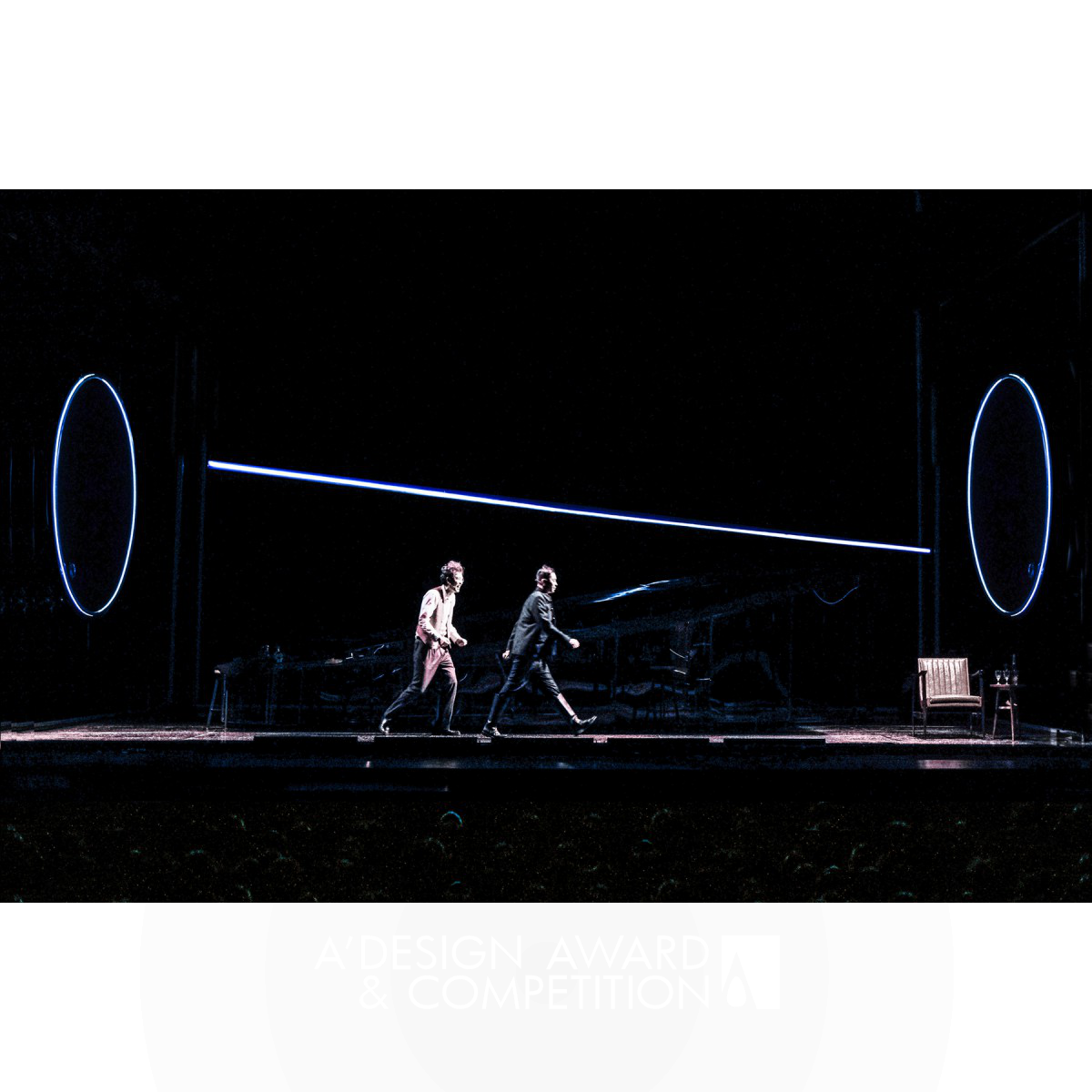 VL : Absinthe was a project that gave me a chance to explore the potential visuals created by merging physics and scenography. This was a play that explored topics on physics, matter, and psychology. During the initial design stage, there were a lot of discussions on how to tackle such a complex play, where deep subjects were discussed, so it was important to have the set visually portray the topics in a manner that guided the audience into the discussions and immerse them into a new world. Therefore, my main aim was to experiment with different methods that enhanced audiences' senses within their theatrical experience, and find new ways to capture their imagination and make them think more deeply about their relationships with time.

VL : With Absinthe, I tried to merge different forms of senses together (sound and sight) and to magnify them to create a lasting visceral experiences for the audience. Collaborating with the director, we tried intently to create a new form of storytelling by incorporating digital medias and different forms of art performance together as we strongly believe that immersive technologies have unearthed a power to enhance our senses in theatre.

VL : We are hoping to bring this to further touring destination in 2021.

VL : It was an ongoing experimental process until we had to move our rehearsal to stage. We continued to experimental on set with the laser light until the opening of the show.

VL : I was invited to design for this stage play.

VL : I do not intend to sell the production right.

VL : As a stage designer, I am always passionate about how I can create stronger connections between audiences and my set design, and have been attempting to bring new technology and innovation in traditional theatre for the last few years of my practise. Whilst I love the traditional stage, I believe that technology is an important medium to utilise, it can transcend and elevate a stage to become more immersive, and get a wider audience to be interested and pay attention to theatre.

VL : It was the name of the stage play

VL : The beauty of this set design is the limitless interpretation of the stage according to an audience's understanding of the play. The oval stage represents time, but can be seen as the milky way, Möbius band etc by different audiences. Through my various initial experimentation, I decided to introduce the technology of laser light sound visualizer to the set to allow the audiences' senses to be magnified within the whole theatrical experience, and allowing sound to be "seen". Through the sound vibrations created from the actors delivering their lines, laser lights were distorted based on the frequency of spoken sound. The visuals created from the actors and actress voice varied drastically according to the pitch of their voice. To perfect the visual imagery showcased on stage, actors rehearsed for months with the custom made devices to create specific visuals to go with the set design.

VL : I collaborated with the director and eventually came up with this concept.

VL : Technology acted as a medium to help us visually see sound and to enhance our other senses in the theatre.

VL : This project required a lot of research and experimentation, especially experimenting with the laser light sound visualizer, making sure the visuals created from different sound frequencies went hand in hand with the general set design. A lot of prior research also had to be done on the subject matter or physics, black holes and relativity, to create a stage that portrayed elements of these subjects, and allow audiences to quickly connect and be immersed into the show that discussed complex subjects. For the staging and material we chose dark reflective panels to create the effect of this vast yet mysterious universe, and covered it with splattered paint to symbolise the milky galaxy, creating a beautiful looking stage.

VL : On a technical side, the production had to overcome a lot of technical difficulties; the curvature of the main stage oval shape had to be exact as they had during set changes, they were separated to create different scenes. The wheels were proved to be a technical challenge as the points of attaching the wheels made a huge difference on the stage's mobility. A lot of consideration was placed on the feasibility of how the actors moved on set. We experimented with different inclinations of the set and before the performance, we trained actors to walk, run and jump at different angles on the circular stage to avoid accidents. The whole stage was built overcoming technical difficulties and required a lot of precision, and we had to find the balance of achieving the desired artistic visual but ensure the structural safety of the stage.

VL : I wanted to showcase this project to a wider audience group even when its not on tour.

VL : This was the first time where I explored different fields of subject ie. Physics into my set design

VL : Check out more of my work on Instagram : vlu.designs