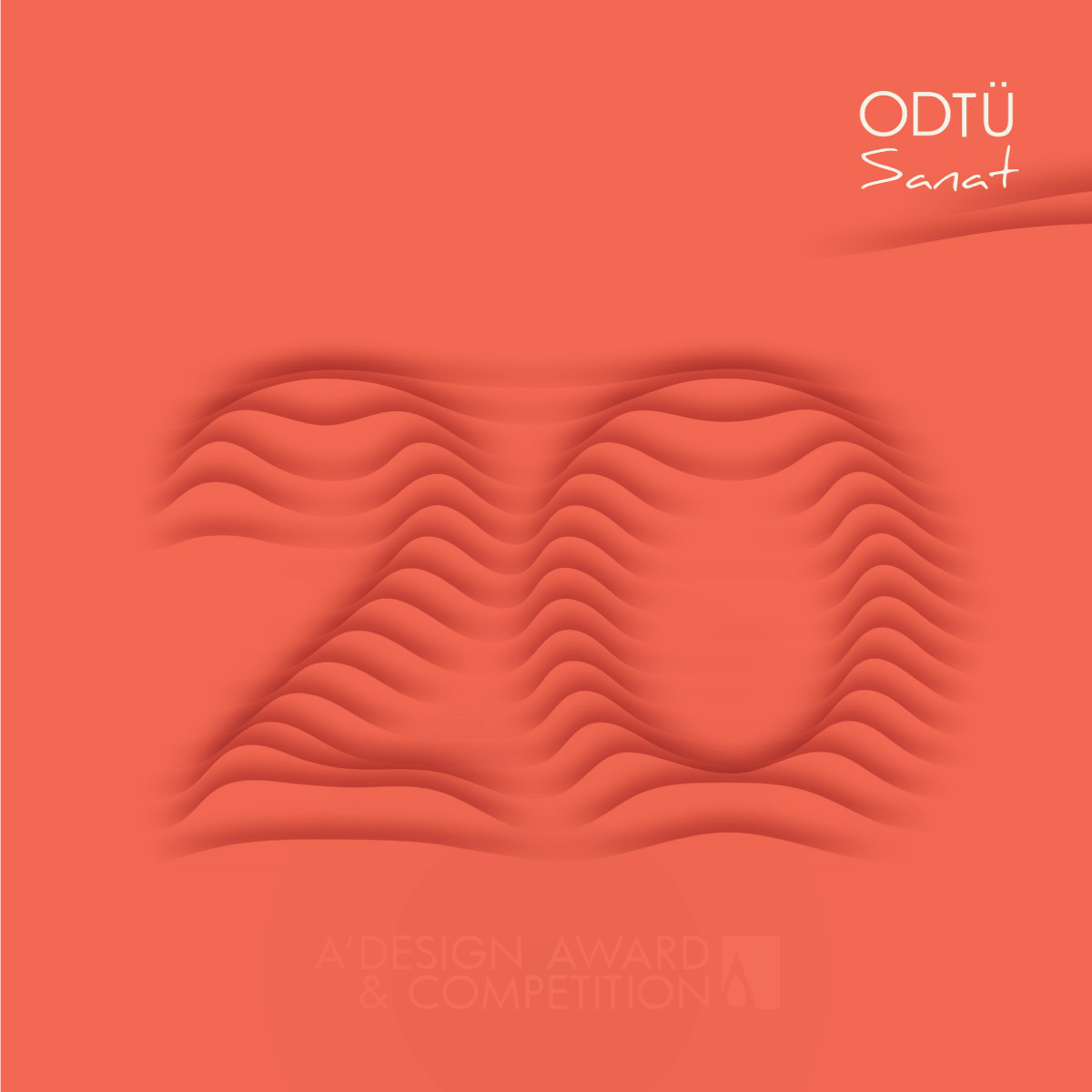 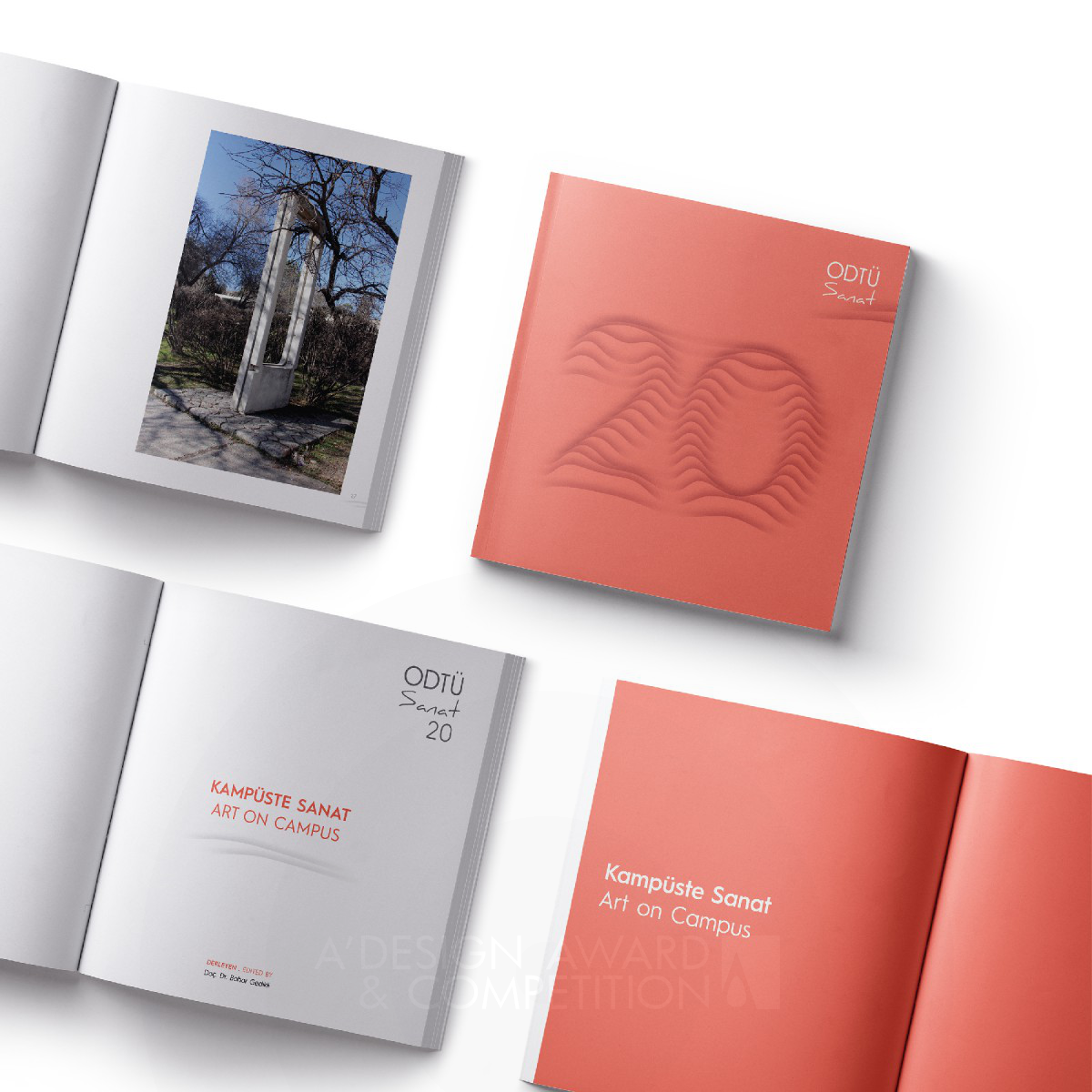 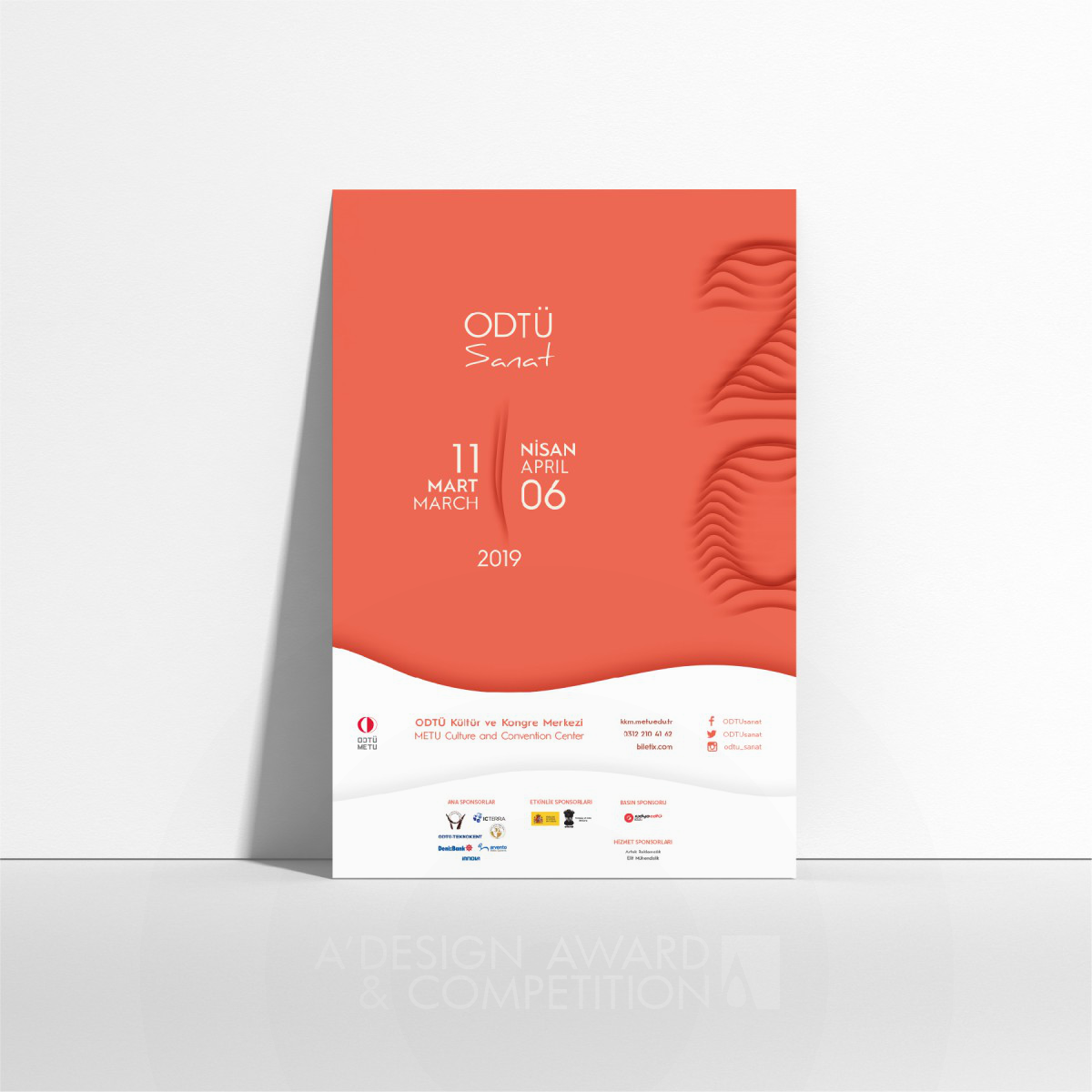 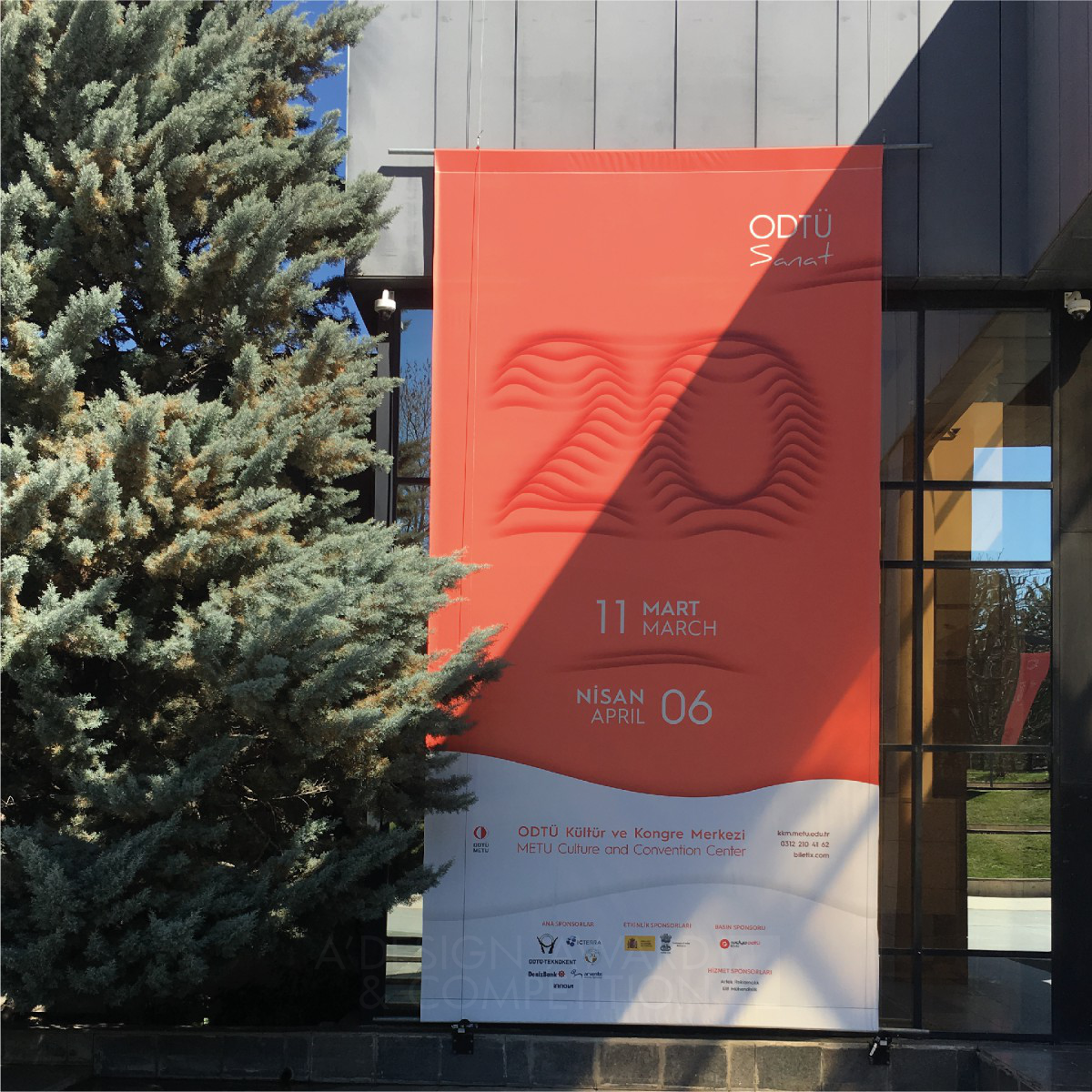 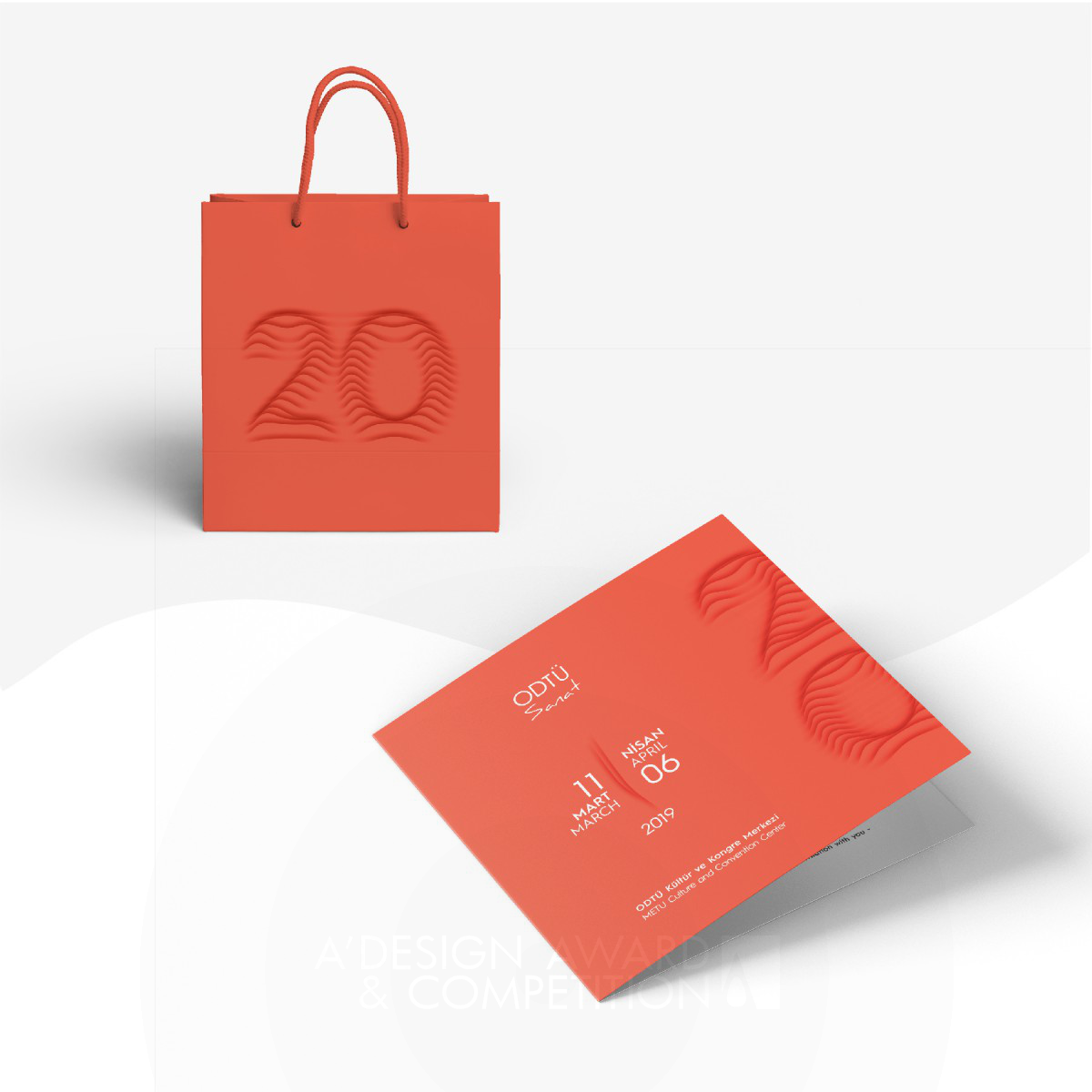 KC : The design idea came from the institution’s special request to highlight the consequent 20 years of the art festival. Therefore, the twentieth year of the art festival was seen as a covered art piece to be unveiled. Our design strategy was to achieve a subtle but compelling visual identity system that would instantly interact with the audience in various environments. Shadows of the same colored layers that form the numbers 2, and 0 created a 3D illusion. This illusion gives the feeling of relief and the numbers look like they melted into the background. The vivid color choice creates a subtle contrast with the tranquility of the wavy 20.

KC : Our main focus was to highlight the consequent twenty years of the art festival as per the client’s request. Therefore, we wanted to put an emphasis on the number 20 itself. We also wanted our design to be easily recognized anywhere on the campus.

KC : We started working on design concepts in November. The final version of this concept, however, was selected approximately after three months starting the initial ideas. During the process, we dedicated almost one month to develop this particular design concept.

KC : This particular concept was among several others of which we presented. However, during the meetings, we especially wanted to focus on this concept because according to us this was the most successful one to meet the client's needs.

KC : According to us, every design concept that we come up with is influenced by many artists and designers even if we are not consciously aware of it. For this particular one, we can say that our most important inspiration was Lucio Fontana’s works.

KC : In addition to METU students, instructors, and staff, the target audience was kept broad for all art lovers located in Ankara.

KC : Highlighting the 20th year in a subtle manner was a difficult job. This design concept was the strongest to achieve this intent. We believe that the vivid color choice creates a subtle contrast with the tranquility of the wavy 20.

KC : The design is named by the art festival itself. We were not expected to come up with a different name.

KC : We used certain photo manipulating and illustration oriented design software while working on this project.

KC : For us, the most unique aspect of this design is the effective use of shadows. Thanks to this, we managed to keep the color palette to be as limited as it could be.

KC : The design concept is developed among our team. However, the ODTU Sanat administrative committee was a crowded team consisting of members with various design and fine arts backgrounds. Therefore, during meetings, we exchanged many ideas with the committee.

KC : This was the fourth consecutive year of our team designing the visual identity system for ODTU Sanat. Also, being graduated from ODTU we were quite familiar with the university values and its identity. Therefore, the research phase for this project was done both consciously during the design process but it was also supported subconsciously by the knowledge came from our familiarity with the institution.

KC : The biggest challenge was to be easily recognized in the METU campus, the largest green campus in Ankara. The visibility, legibility, noticeability were to be provided since there were many printed and digital materials to be designed and produced. In addition, as mentioned earlier, ODTU Sanat administrative committee is a crowded team consisting of members with various design and fine arts backgrounds. The other creative challenge for us was to come up with a design idea that could bring together the challenging opinions of the committee into a single system.

KC : We were very pleased and confident in this design. Also, we received many positive feedbacks from both the administrative committee members and other designers which encouraged us to submit our design to A’Design Award & Competition.