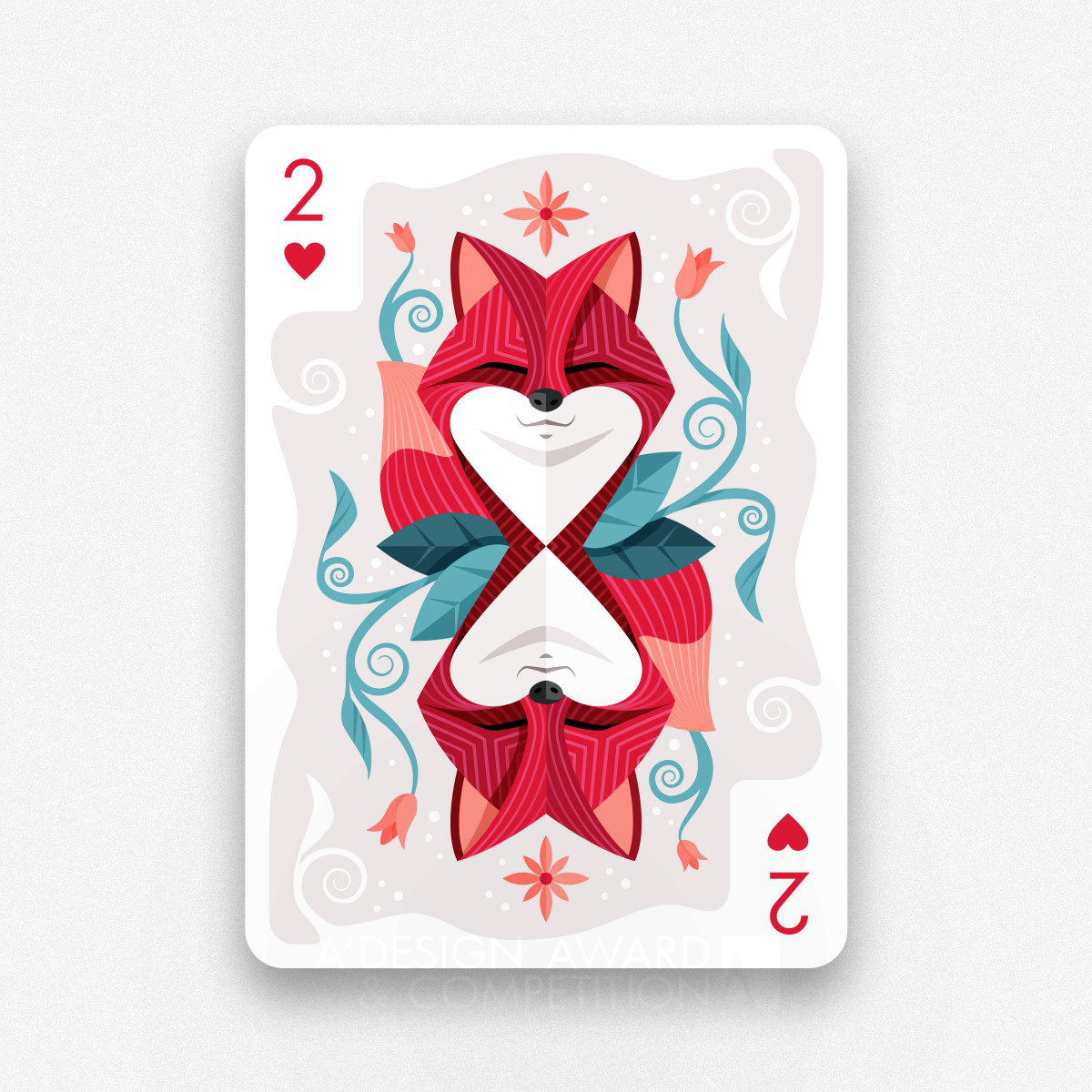 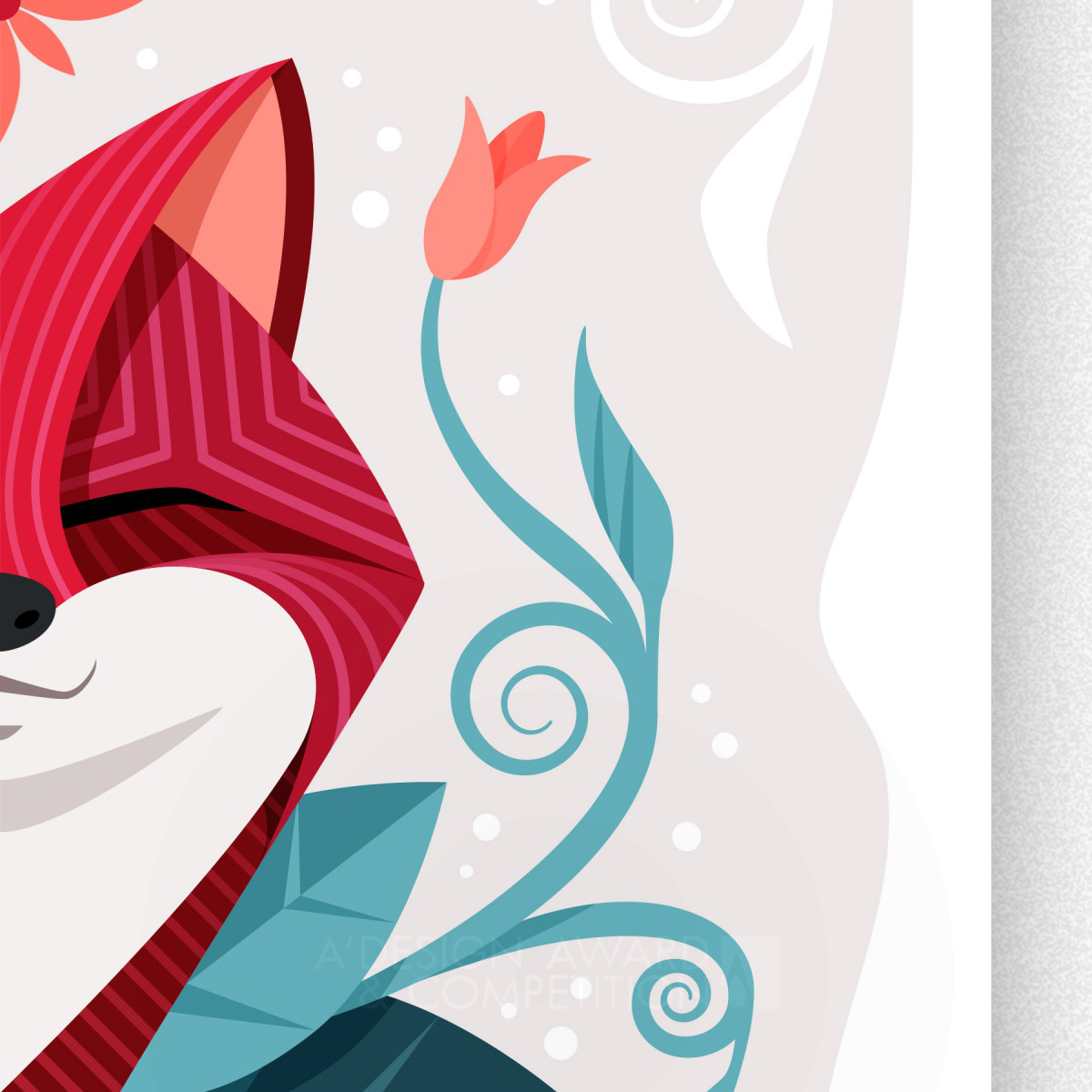 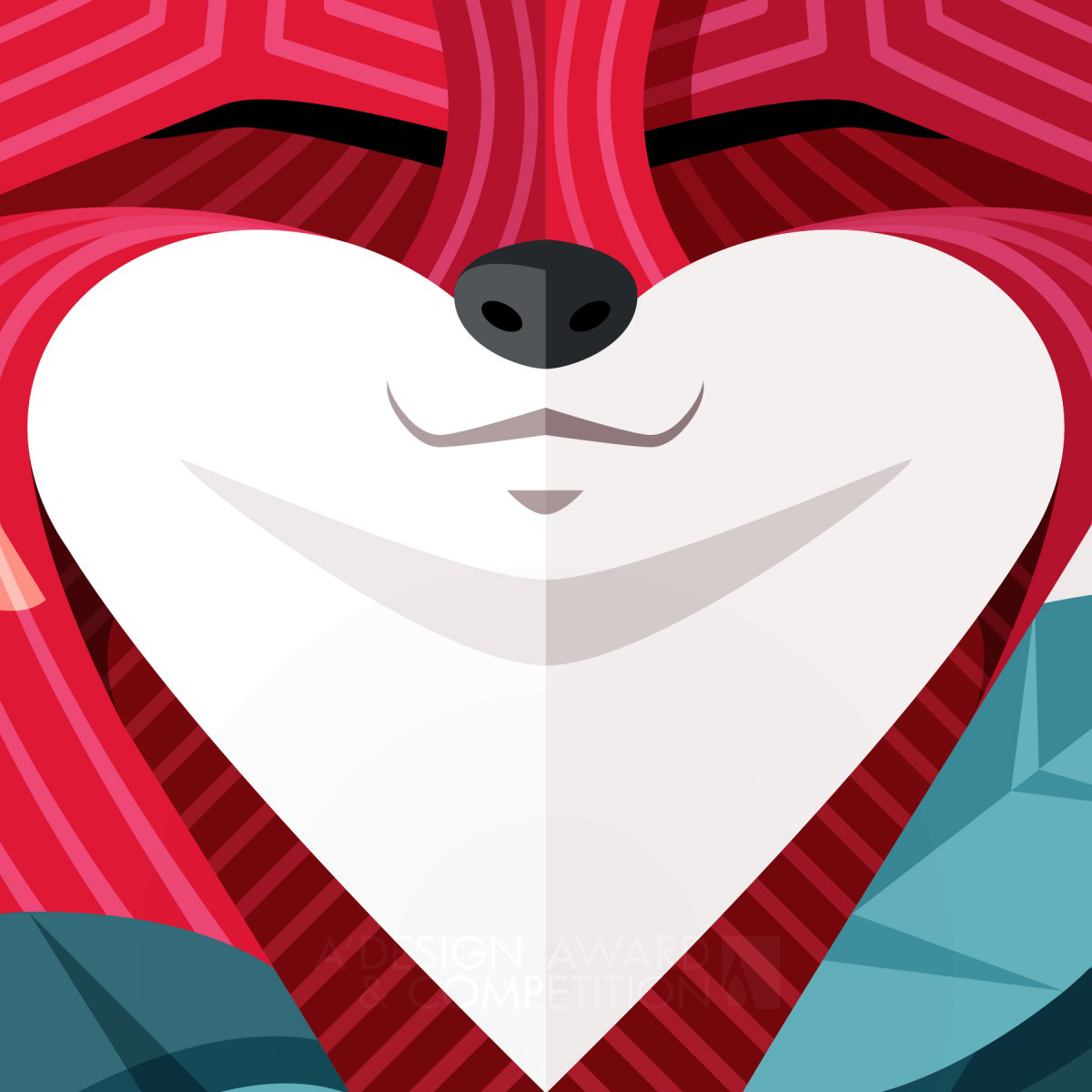 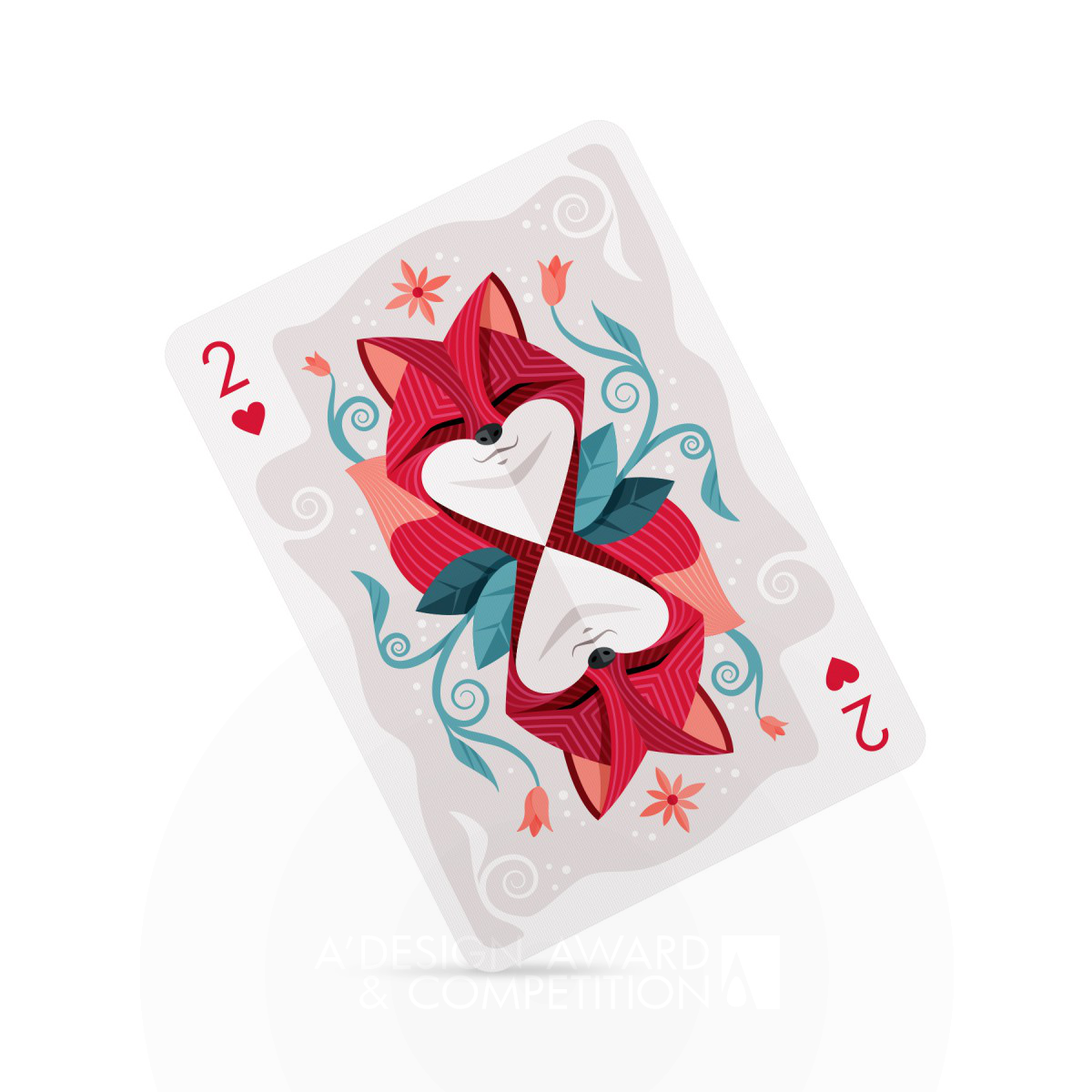 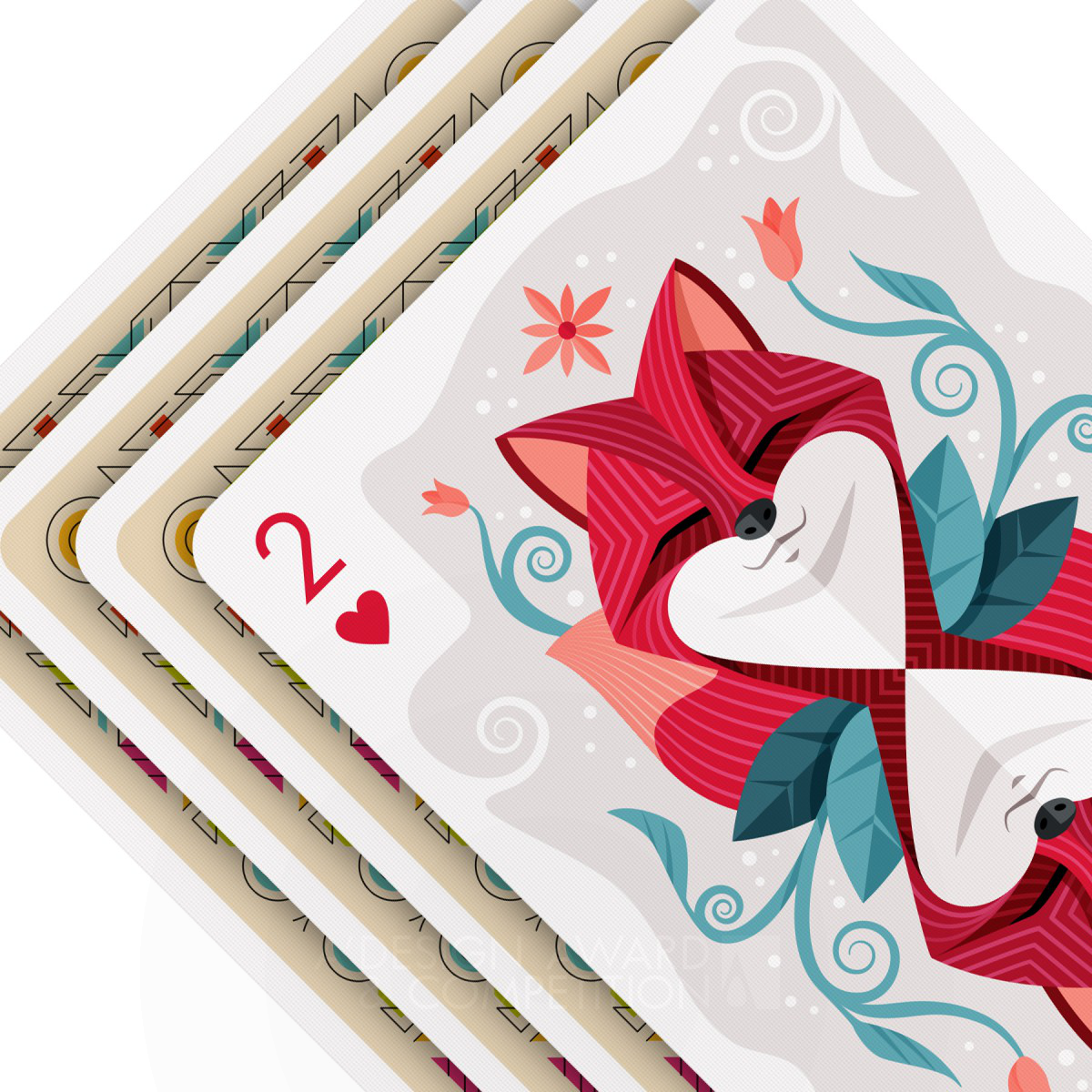 SR : The main principle behind “Two of Hearts” illustration was to create something meaningful and strongly related to the specific playing card I had to create an illustration for. The first thing I did before starting conceptualizing anything was to learn about the meaning(s) commonly attributed to the “Two of Hearts” card, so it could help me to build my illustration. Since the “Two of Hearts” card is related with the concept of relationship/love between living beings, it immediately reminded me of “The Little Prince” fable written by Antoine de Saint-Exupéry and more precisely the part with the fox (which, by the way, is one of my favorite animals). So I decided to use this as inspiration to create my vector illustration.

SR : While conceiving this illustration, my main focus was to find the right balance so I could keep the design appropriate (it had to be PG-13), cohesive (stick to the card’s color palette), playable (readability) and at same time to vehicle a meaningful, playful concept visually characterized by my illustrative style.

SR : Since I plan to entirely design a deck of playing cards featuring my own illustrations, I would like to make use of my “Two of Hearts” illustration for this specific project. At this point the project is still an idea that needs to be further developed.

SR : Overall, it took me about twenty hours of work spread over several days. I invested the equivalent of a half working day thinking about the concept, putting together my mood board, sketching on paper and choosing the visual concept I found the most suited for the project. After this, I spent mostly of the remaining time creating the digital version and fine tuning the visual appearance until fully satisfied.

SR : In 2018 I was approached to take part in a non commercial collaborative project bringing together many designers around the world to design 52 playing cards for a very unique deck. Since I like to play cards with friends, that I always spend very nice moments in doing so, that it was exciting to collaborate with many talented artists from around the globe on a common project and that prior to this I even had in a corner of my mind to create illustrations for playing cards, I gladly accepted the proposal. Once I confirmed my decision to join the project, the coordinator attributed me a playing card which I had to create a design for. And that’s how I started to work on “Two of Hearts”.

SR : There isn't a specific target customer. The illustration was created for a non commercial collaborative project aimed to regroup various artists around the world mainly as a way to potentially generate synergies between them.

SR : The name for this design simply comes from the playing card which I was attributed and which I had to create an illustration for.

SR : During the conceptualization process I simply used paper and pencil. The final design was digitally created on computer (without the use of drawing tablet) thanks to a vector graphics editing program commonly used by digital illustrators.

SR : Technology played an important role as the final illustration was digitally drawn thanks to a vector graphics editing program.

SR : Due to the type of project this illustration was made for, data or analytical research wasn’t required. I only conducted a research on the web to find out which meaning(s) are commonly attributed to the “Two of Hearts” playing card. I used the result of this research as an anchor point which I could build my concept around.

SR : For this illustration, the creative challenge I faced was mainly to find an appropriate, coherent and visually appealing solution to convey a concept related to the type of card which was attributed by the project's coordinator. All that without affecting the playability and by keeping the design clearly legible at a relatively small size (it had to fit into standard poker playing card dimensions) no matter the way the card is vertically hold in hand.

SR : I thought it was a great opportunity to have my design skills reviewed and recognized by a panel of professionals specialized in design. I also saw the fact to take part into an international design competition as a way to considerably increase the visibility and credibility of my work. Self-taught illustrators/designers may be subject to prejudices about their skills, so a valuable and impartial recognition of their abilities represents a non negligible way to gain more respect.