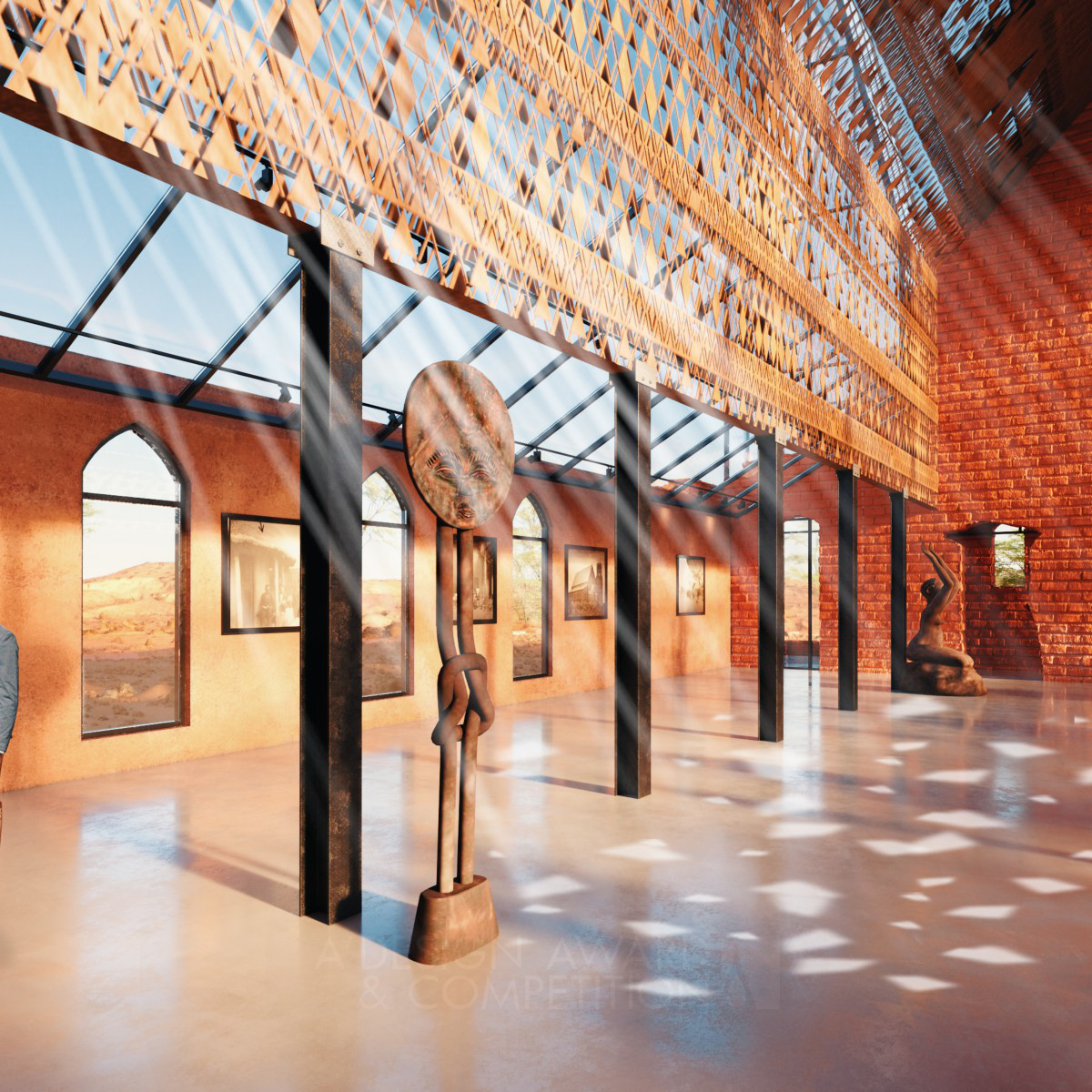 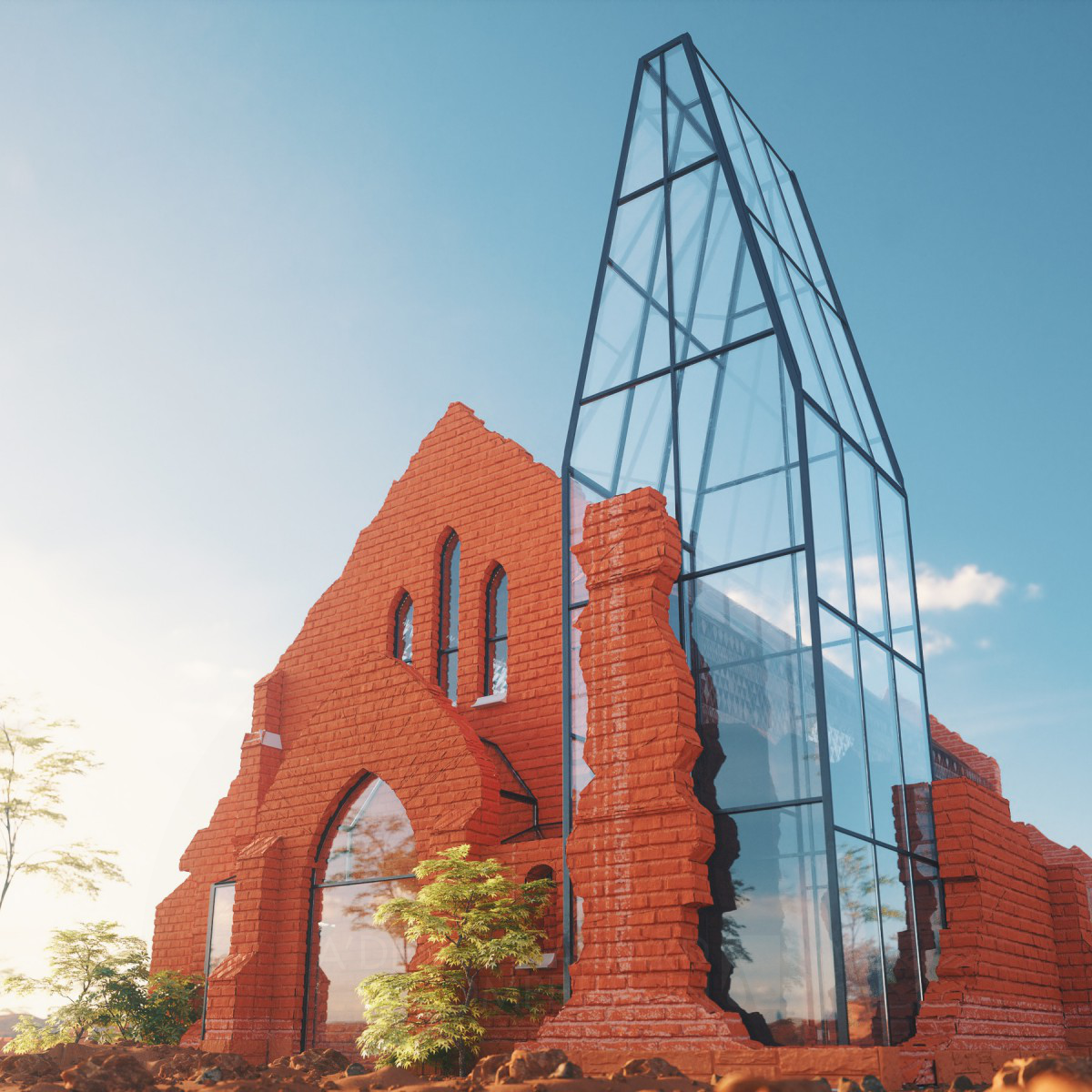 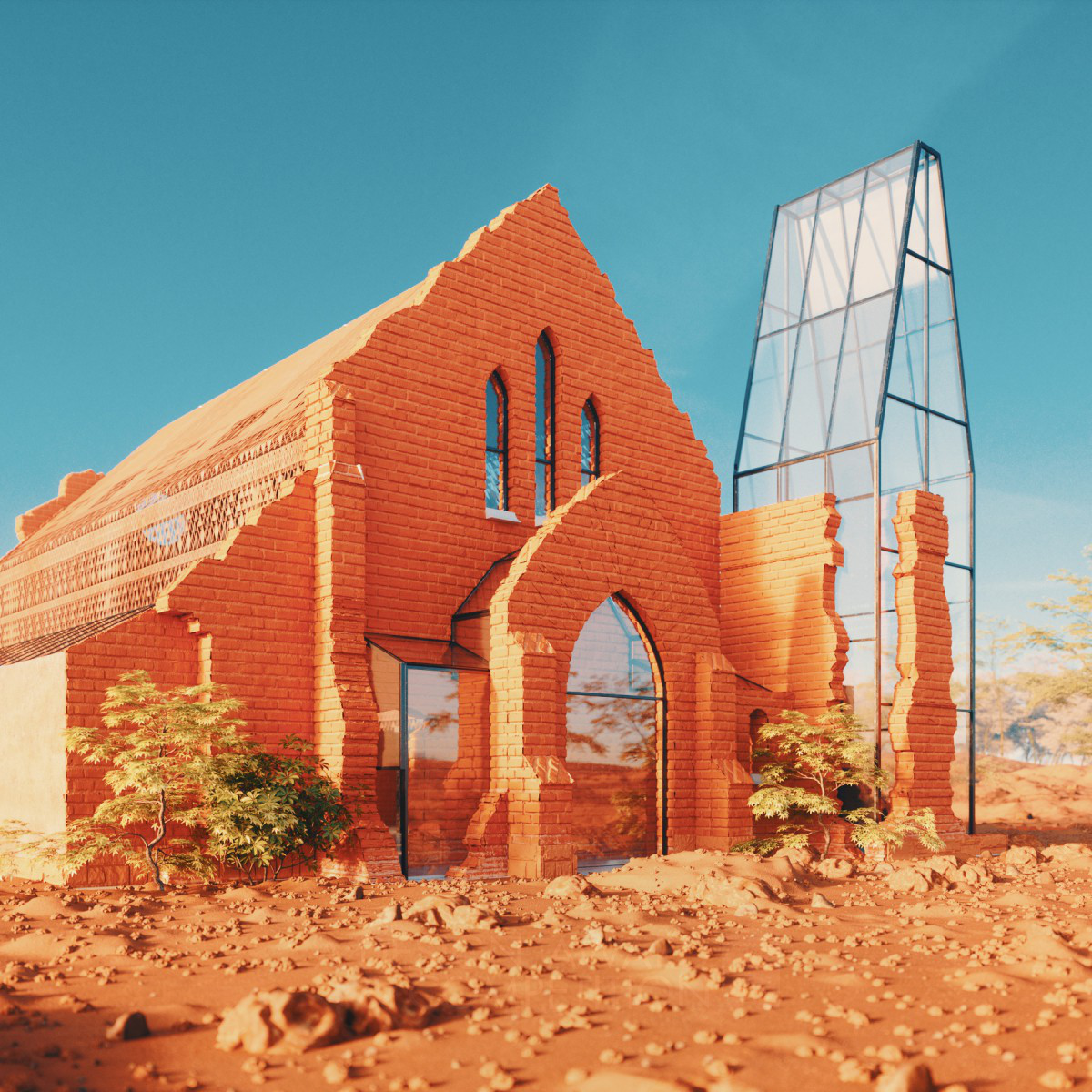 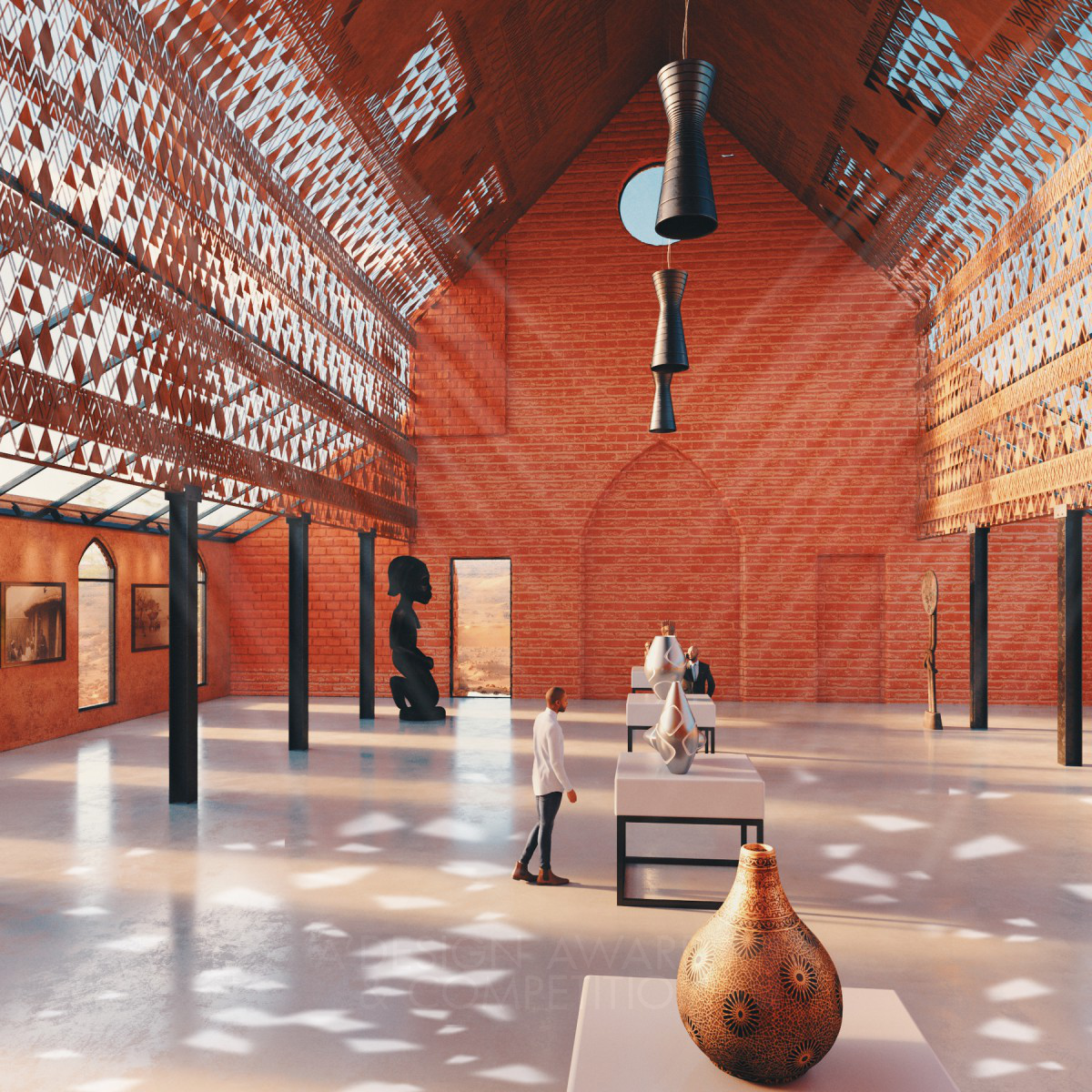 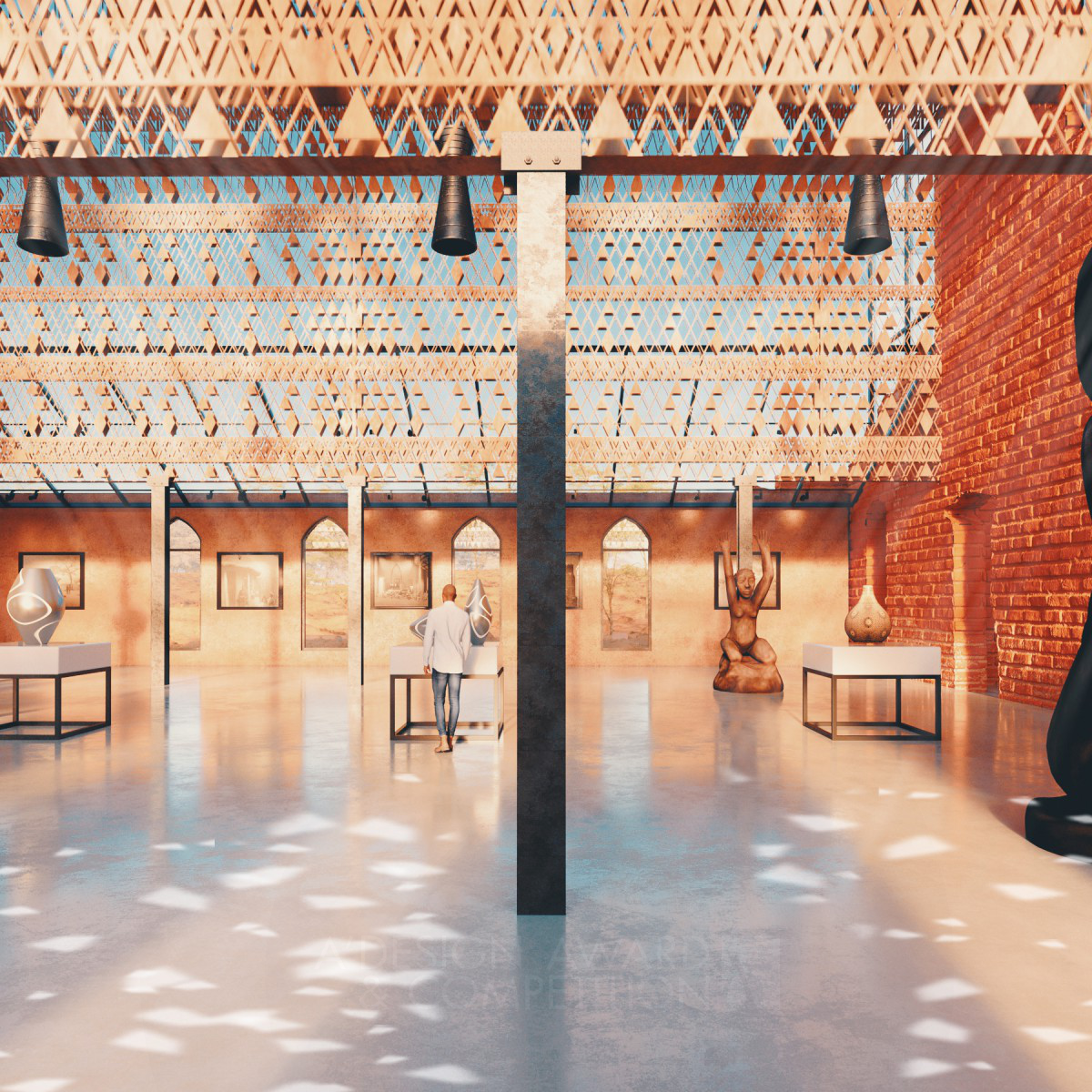 BS : Creating a design that tells a story of the old and representing it into a new story that can be brought forward to the future.

BS : The focus was to have a clear design approach that would successfully merge the old and the new through clever technical detailing and material aesthetics to present a hybrid form that compliments both eras in time and also represent a new cultural value.

BS : The intention is to present this proposal to the Botswana Tourism Board to perhaps consider the proposal into bringing it to life. Currently and over the past few years there have been considerations to revive this historical site as well as to preserve its ruins, therefore this is a great opportunity to present the idea.

BS : It took about three months of conceptualizing and planning as well as doing a historical background check of the site and its current state in terms of developments that are underway to revitalize and preserve the site.

BS : I decided to pursue this design out of a personal inspiration mainly because the site of these ruins are located in my village (Palapye), mainly the older part of the village. They have become quiet an iconic symbol for the village and are attracting a large number of tourists and locals, therefore by coming up with the design proposal, this could further establish the village’s historical component and influence its modern landscape.

BS : The designs are solely produced by myself with the intention of sharing them with relative stakeholders to bring it to life

BS : Over the period of my ongoing doctor research, I have realized that Botswana has a lot of history that is lacking in terms of architectural preservation and therefore there is a dire need for architects and other professionals like archeologists and anthropologists to work together in re-vitalizing and preserving the historic sites.

BS : I am greatly influenced by Diebedo Francis Kere and his ideological approach towards a social and ecological architecture, especially combining cultural influences in his work. His approach has helped me sculpt my own approach to be able to tell the story and express the culture ,traditional techniques and values of where I am from through built form. However for this particular project, it has been more than Kere’s influence but the influence from other precedent cases of a similar type that I have proposed. The Dovecote studio by Haworth Tompkins is one of them. The architect dealt sensitively with a dilapidated old building and brought it back to life by combining the old and the new by bringing new material aesthetics that still mimicked the old structure materials. This is an approach I used as well with my proposal because it had similar conditions which needed to be responded to delicately. However I went further to embody the traditionally history of the site and the ruins and represented them as well in the design.

BS : The proposal is targeted especially for the community. Creative design , mostly architecture is a misunderstood profession in the country, therefore people need to understand and know that an architect is about creating human experience and creating a sense of place. Through creating projects that embody the life an dculture of a place, people can begin to be engaged, informed and be a part of creative projects within the country so that they can also contribute their artisan and craft skills into the buildings. This can create sustainable economies and an exchange of traditional building or craft skills that can be passed down. Lastly the proposal is also at Botswana Tourism Board, Botswana National Museum and other relevant stakeholders that might be interested in bringing the idea to life. This could create a platform for local architects and other professionals to be involved in projects that affect our own communities, we are best suited as we understand the sense of places of which we come from. However I must also note that, it is especially targeted for the community.

BS : It captures the soul, history and culture of the place and with that brings them forward into a contemporary vision that’s creates a new value that is to be understood and preserved for future generation.

BS : The oldest part of Palapye village is called ‘Old Palapye’. It is a historic site which was a 19th century capital of the Bangwato tribe that was led by the royal king Khama III- one of the most powerful Tswana kings. The capital was later abandoned after the royal King Khama III relocated his capital to another prosperous site after the current one had suffered from lack of resources to sustain the capital, hence why it is called Old Palapye. Therefore the designer used the same name to call the new museum design proposal ‘Old Palapye Museum’ to further continue its history. The name ‘Palapye’ originally called ‘Phalatswe’comes from describing the wild animal called ‘Phala’ in Setswana language (Impala in English). It used to exist in abundance a long time ago in the area, this is where the village Palapye adopted its name.

BS : Every aspect of the design is unique in its own sense , from the material aesthetics that blend in with the burnt brick ruins, the corten steel roof that blends in with the dry dusty landscape, the traditional patterns that tell history used on the roof to filter in light and the glass and steel frame steeple that act as a landmark in the landscape. Every part belongs to the whole and that makes it unique.

BS : Techonology is embraced in the detailing aspect of the materials to carefully blend in old ruins with a new contemporary structure.

BS : It was important to conduct a historical research on the site area. First archival photos of the old church before it was in ruins needed to be sourced to get a full grasp on the overall form and scale. Unfortunately only about two were found, therefore hypothetical assumptions of scale had to be established based off from a site plan that was conducted by an archeological team from the University of Botswana. However it must be noted that if ever the design is considered for construction, proper site evaluation and measurings will be done parallel with relevant specialists of archeologists and heritage specialists ,considering how fragile the ruins are and the site.

BS : It is important to understand the architectural challenge of finding the right approach for adopting a ruin in a historical site. This involves the form f the structure and the materials that have remained and exposed to weather elements over the years. By achieving a clear design approach for a successful merge of the old and the new through clever technical detailing and material aesthetics, a hybrid form can be presented that compliments both eras in time.

BS : Before approaching the relevant stakeholders to present the proposal to, I decided to enter it first into an international competition so that it can have the relevant platform to be acknowledged, that way it would be easy for it to be backed up for funding.

BS : My approach to design is to consider the traditional heritage, culture and history of a place, and through this design approach I have been able to believe more in my approach in order to change the architectural narrative in my country that often disregards this in the architectural built environment and the creative industry as a whole. Architects are story tellers who tell their stories through built form and the environment, we create experiences and transform spaces from the past into the future. The best way to tell that story is by having a great sense of the place you live in, and that is the place that has often shaped your culture values, tradition and lifestyle. Therefore we are the best people to represent our own heritage and culture though built form, as which makes us all unique.

BS : no Thank you