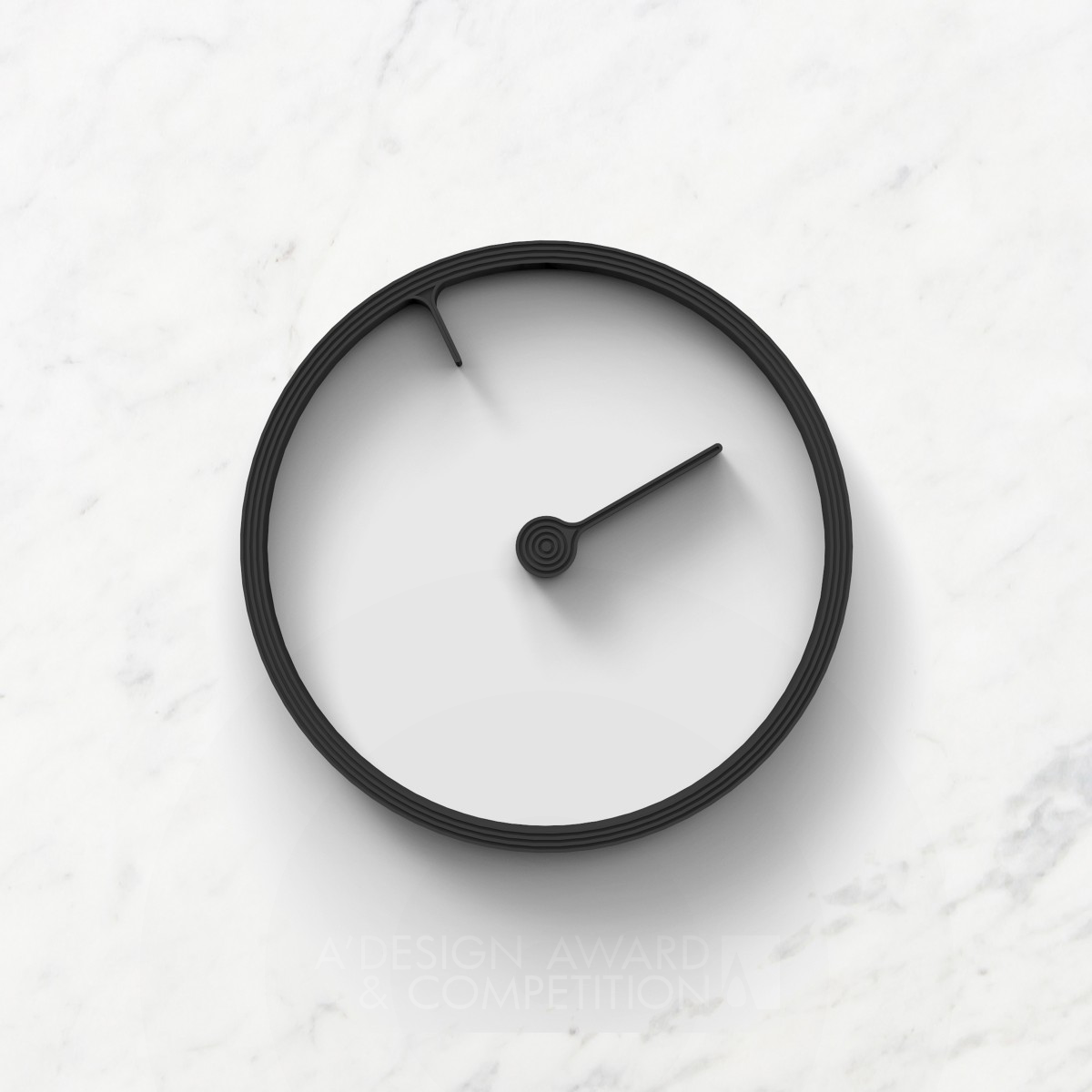 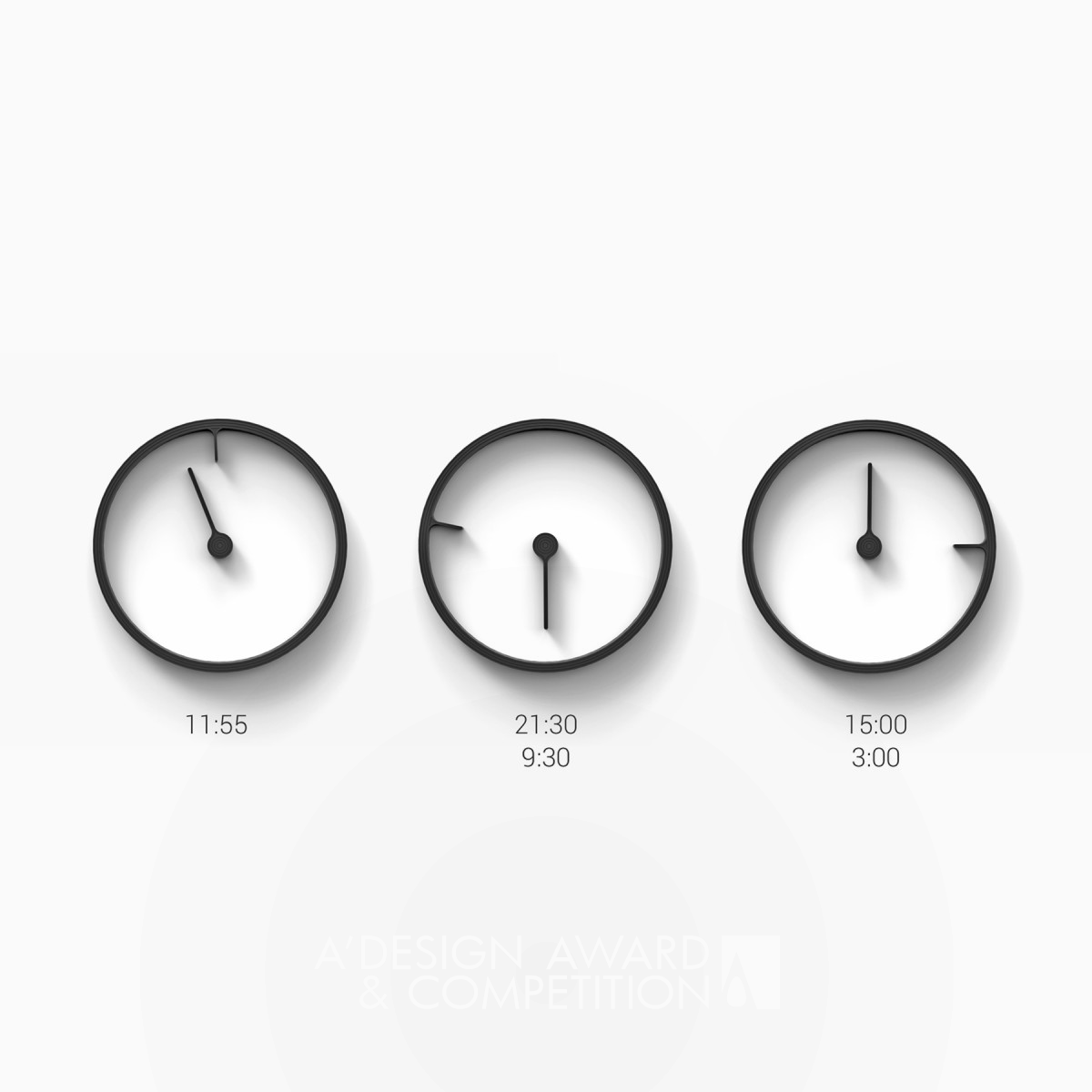 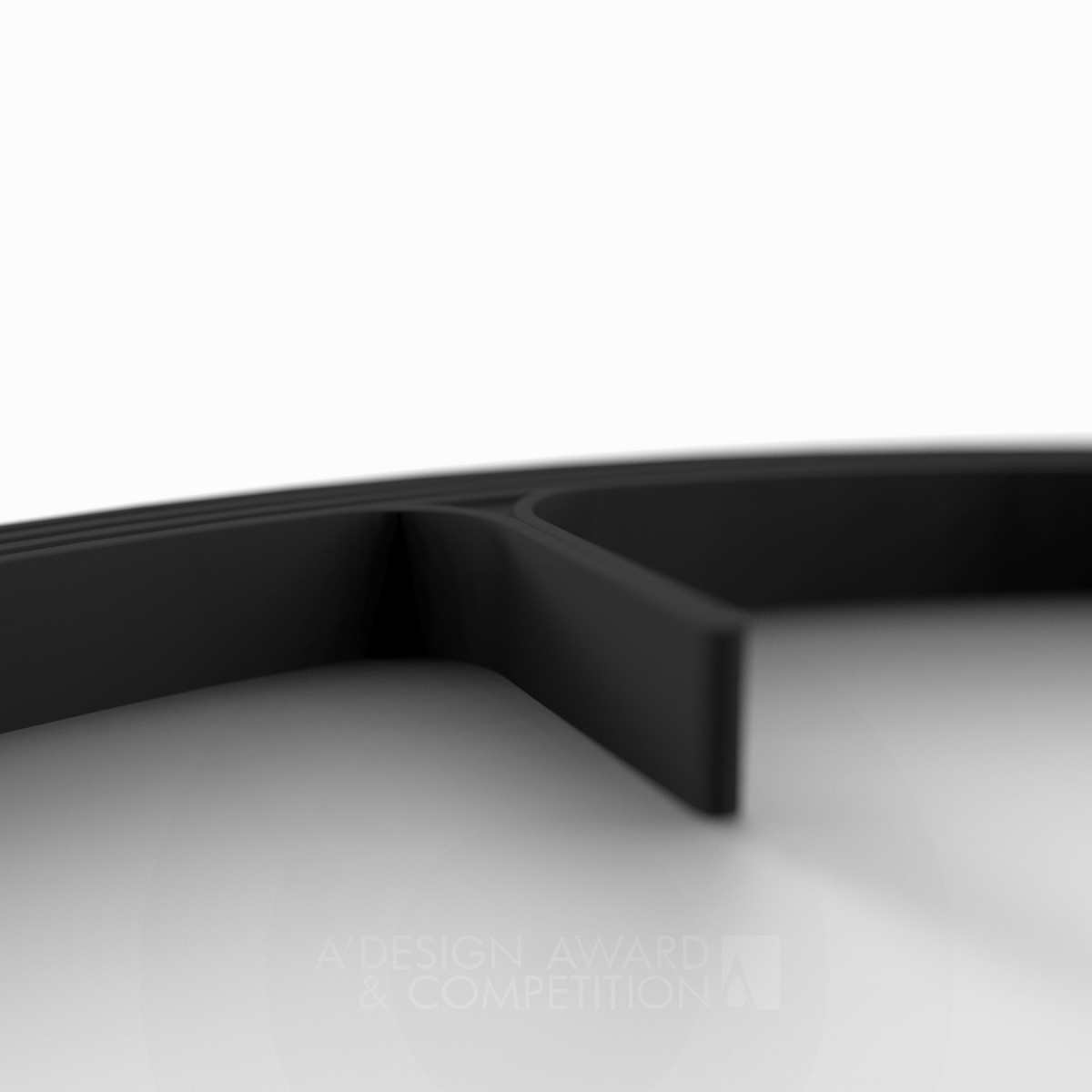 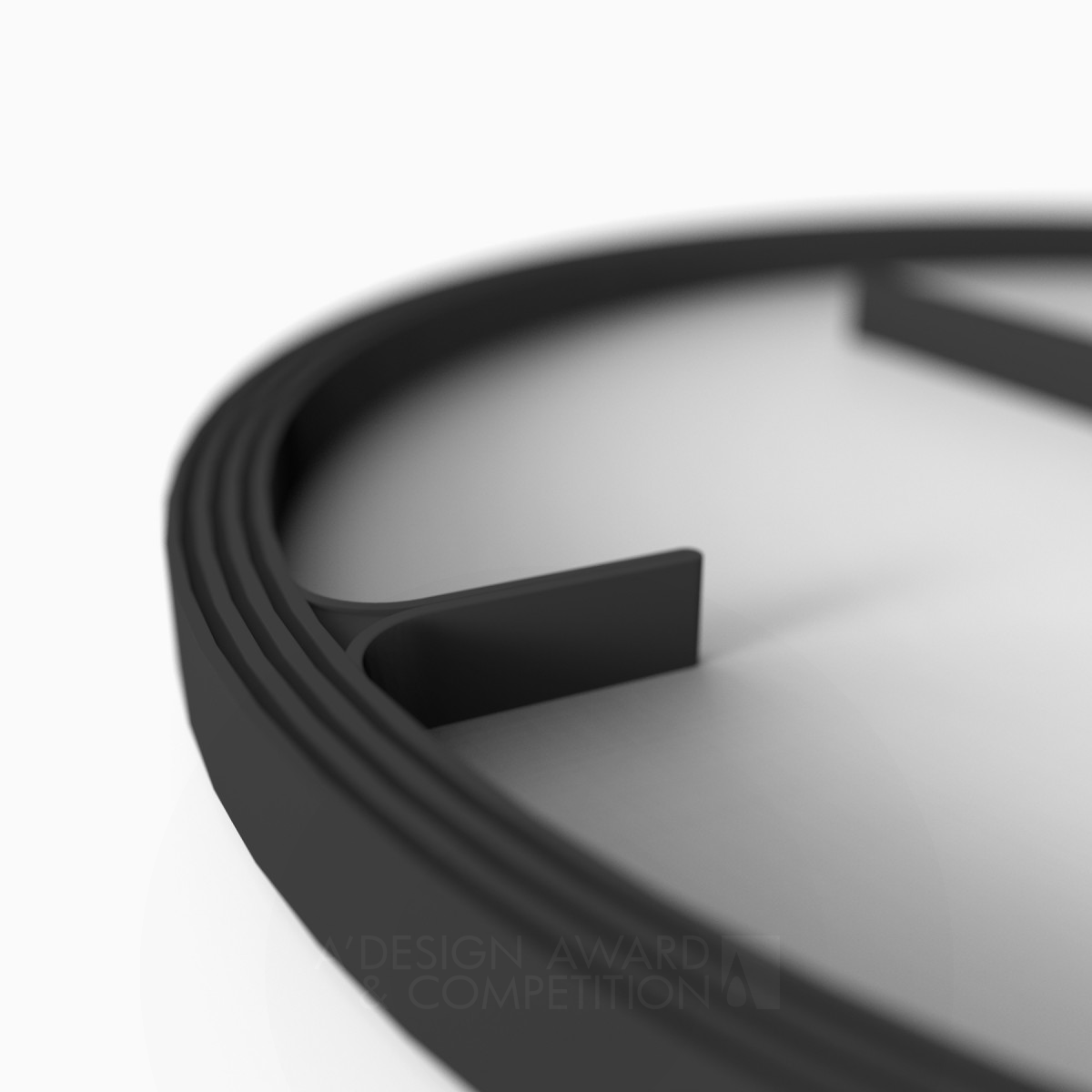 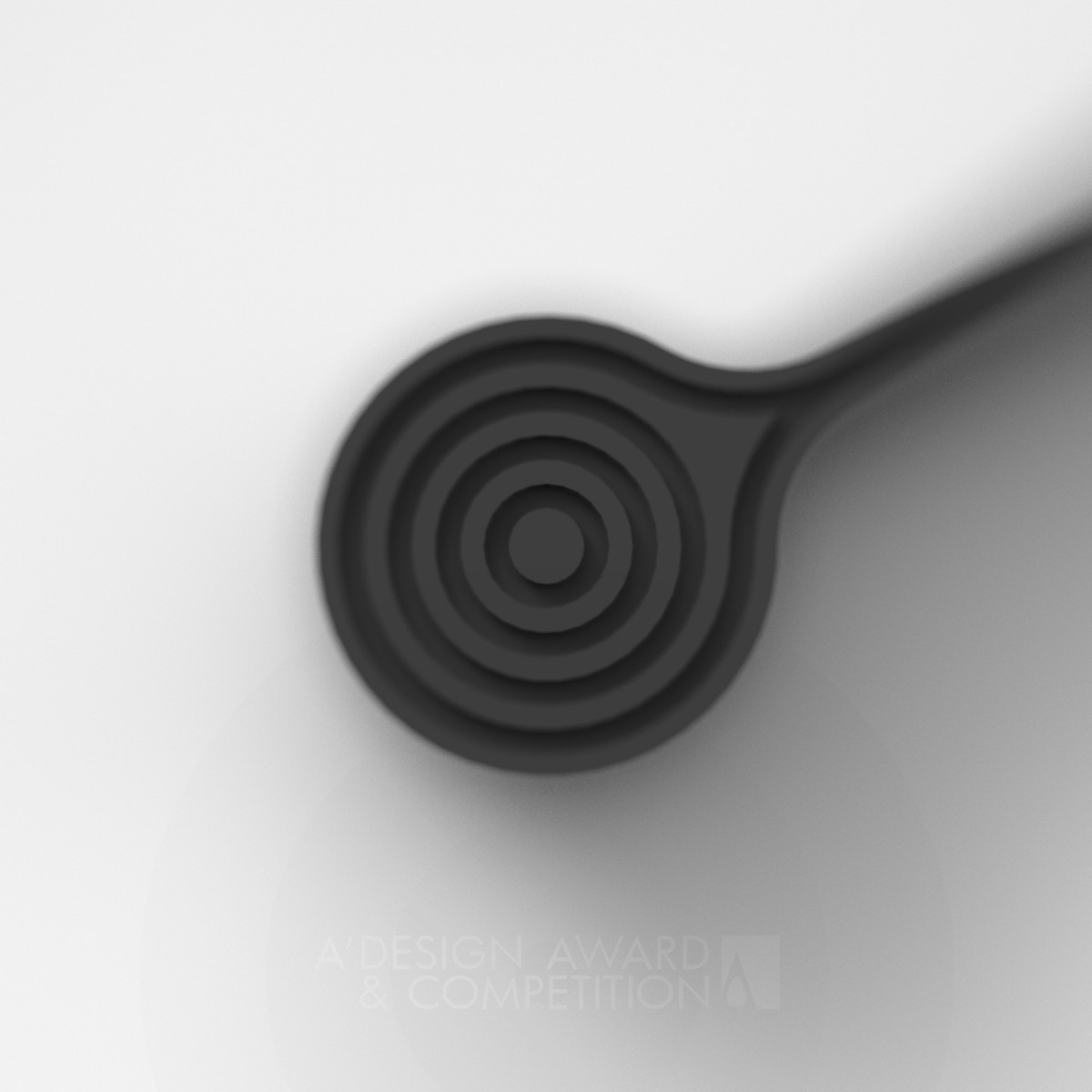 MB : I noticed that there were numerous different clock designs but they all seemed so much alike. I wondered why they had to work in that specific way. It seemed to me as if the design of the clock didn’t change at all even though its main function is to display time, which is constantly changing.

MB : My intention in the Reverse clock design was to do something different while keeping the same shapes that a clock is made out of so that it would still be easily recognizable.

MB : Currently, the clock is a concept, but it has the potential to be realized. I would like to realize this concept together with a company in the near future. I believe it’s a design that has a lot of potential and people seem to like it very much. I think it would be a great addition to the current clock designs that are available.

MB : The project was completed during a four-week period in 2016. I decided upon the design quite quickly. Some additional work was performed after its initial design process, but nothing changed to the design of the clock.

MB : It was a project that I designed at Pikoh high school as part of my studies in Industrial Arts. The assignment was to design a clock.

MB : The design is currently not being produced but I do plan on leasing the production rights to another company. I would prefer not to sell or produce it myself. I’m not in a hurry of producing it and would rather wait for the right company to lease it to. I’m looking forward to realizing the project in the near future.

MB : In all my designs I try to do something different. I noticed that the hands of the existing clock designs were always rotating around the center axis. I wondered if it had to be this way and attempted to design a clock that looked similar to existing ones yet different and interesting.

MB : While presenting different concepts to my teacher, Frederic Boonen, during the design process of the clock in my school he was the one that was particularly interested in the design of Reverse. At the time I wasn’t yet satisfied with the concept but thanks to him I continued developing it and eventually came to the design of Reverse.

MB : Reverse is designed for everyone. But it would fit particularly well into a modern home.

MB : The way that Reverse works sets it apart from existing designs. The little hand moves by the outer edges of the clock and points to the hour while the middle one pivots in the center and points to the minutes. Most other clock designs work with both hands rotating in the center. This small change makes for a big impact on how people perceive the design of the Reverse clock.

MB : The name Reverse was chosen because of the reversal in which the hands work opposed to existing designs. One hand in the middle and one in the outer ring of the clock. It's the reversal of the ordinary clock design.

MB : Modeling was done in Solidworks and rendering was performed in Keyshot. Afterword some retouching was done in Photoshop. Apart from software, basic tools were used for sketching and prototyping.

MB : The most unique element of the design is the way Reverse works. It’s subtle but creates an entirely different design.

MB : I devolved Reverse from start to finish myself. I would like to work with someone who is specialized in the mechanical part of the design to further develop and improve it.

MB : The design is made through the use of very basic shapes and forms that don’t require any specialized production methods. The inner working of the clock, however, is different from existing ones but can also be realized with very basic production techniques. The design may look very different, but it’s actually not that difficult to realize.

MB : No data or analytical research was performed, or needed, in the design process of the clock. I knowingly did not do any research at the beginning of the project. I started by brainstorming and looking at existing designs to think of a concept that’s different from all others and visually appealing, a clock that lets people embrace time. This unusual perspective created insights into what a clock could be. I prefer to always start out with this kind of approach to a new design project. In this case, I came to an idea of a design that needed very few additional changes and that eventually evolved into the clock design Reverse.

MB : I decided at the beginning of the design process that I wanted to create a clock that looked like existing ones but had this unusual but appealing element to it. I believed these characteristics were ideal for a new clock design. However, coming up with a design with these requirements was difficult. It couldn’t be too different from existing designs but also had to be visually appealing and interesting. I tried to incorporate all the elements of the original clock design but in a slightly different way, resulting in a design that looked mostly the same but at the same time was entirely different and unique.

MB : I received an invitational email from the A’ Design Award & Competition. I try to submit my work each year to a design competition, pitch it to companies, or send it to multiple press outlets. I received the invitation at just the right time when I was looking for such an opportunity. The values and goals of the A’ Design Award & Competition were very much aligned with my own goals and I decided to take part in the competition.

MB : In retrospect, the project was relatively short and small in comparison to projects I’m currently working on. At the time of designing Reverse, I didn’t think much of it and moved on. However, I always kept all the data of the project and only later send it to multiple design outlets by which it was very well received and eventually publicized multiple times. What I will always remember and keep on doing is to always keep all the designs I’ve created because sometimes there may just be these small gems of projects that you only realize afterword.

MB : I would like to once again thank my teacher and coach, Frederic Boonen, for helping me in the process of designing the Reverse clock. I would also like to thank everyone who showed interest in the design and those who’ve helped me refining the details of the design which eventually let me to sending it to multiple design magazines and submitting it to the A’ Design Award & Competition.