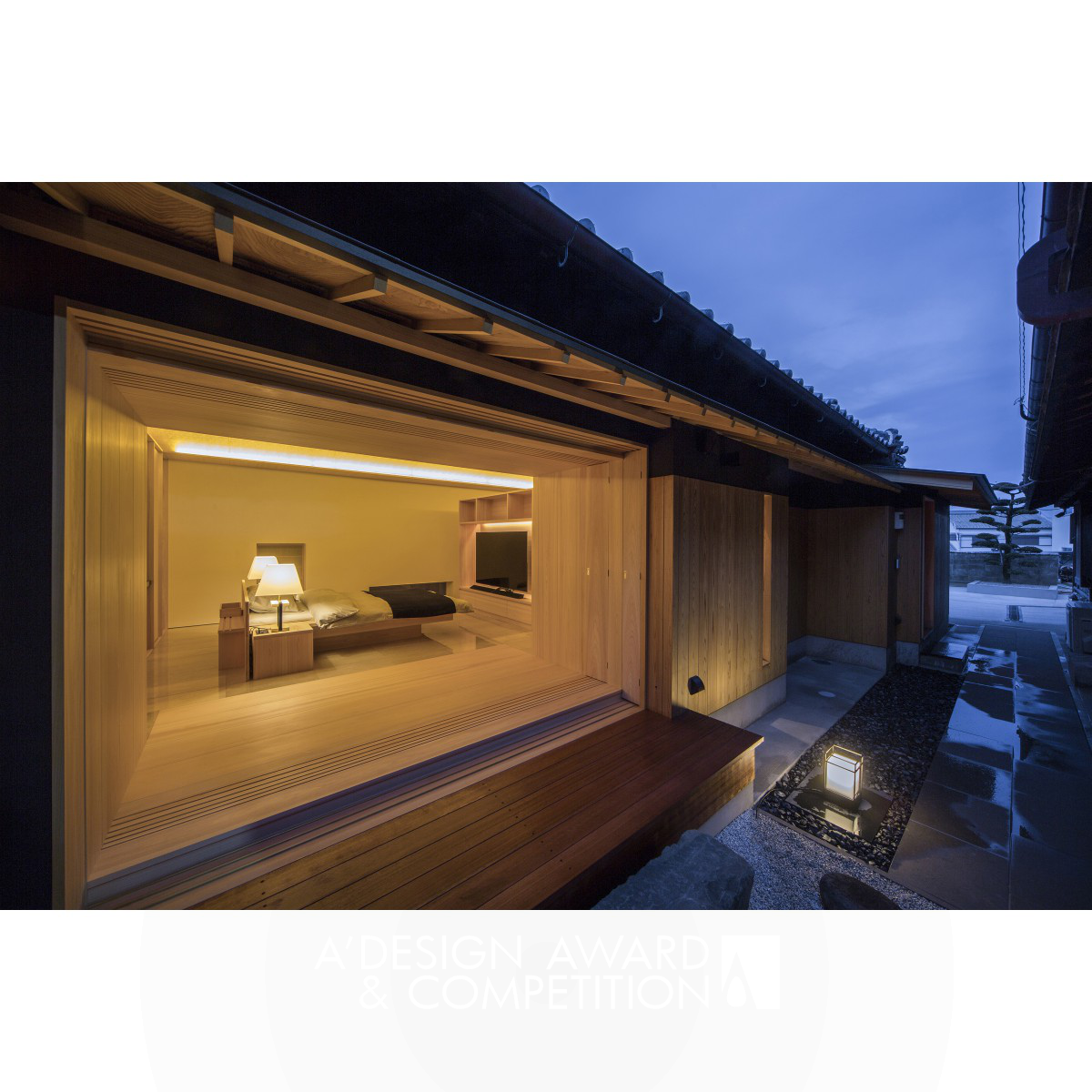 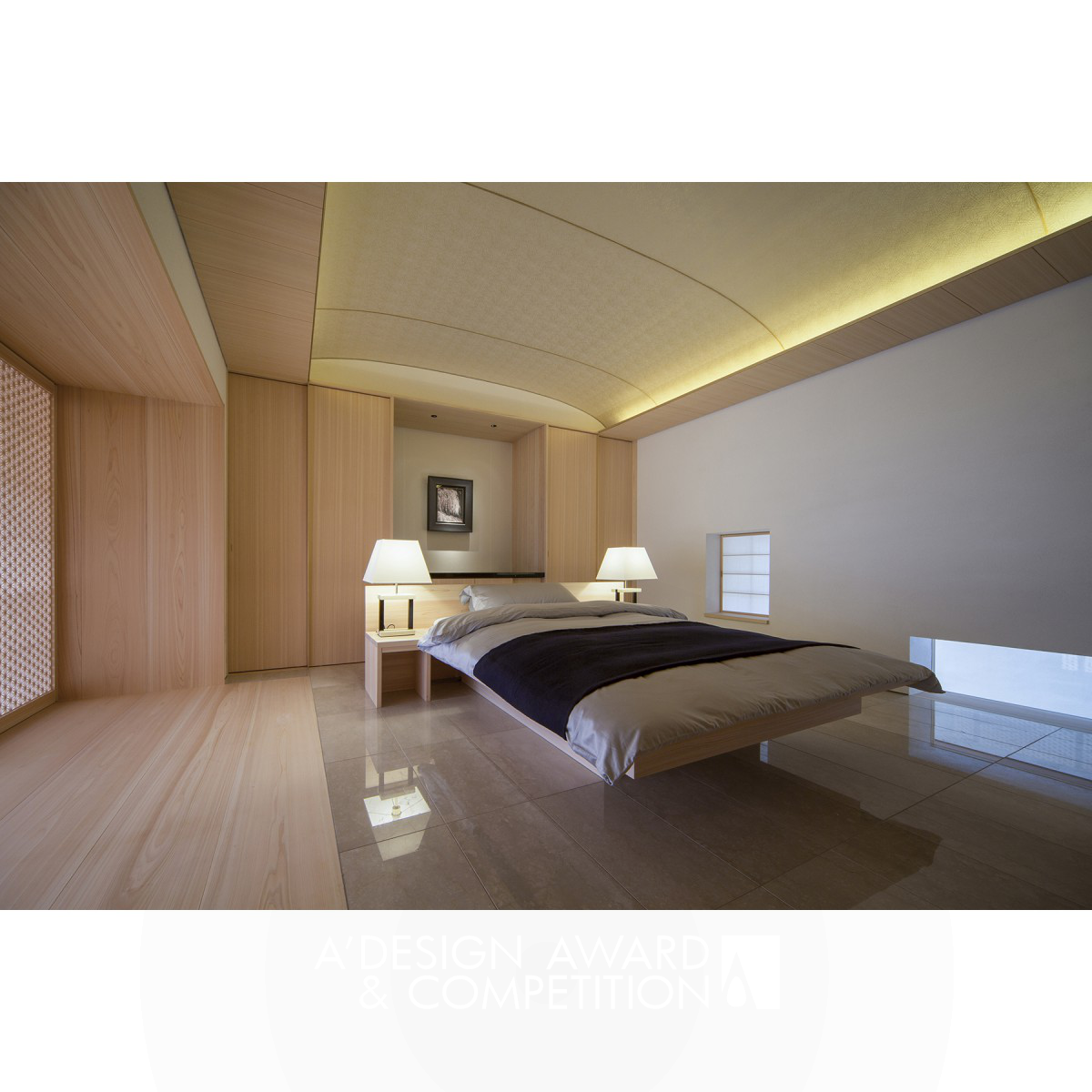 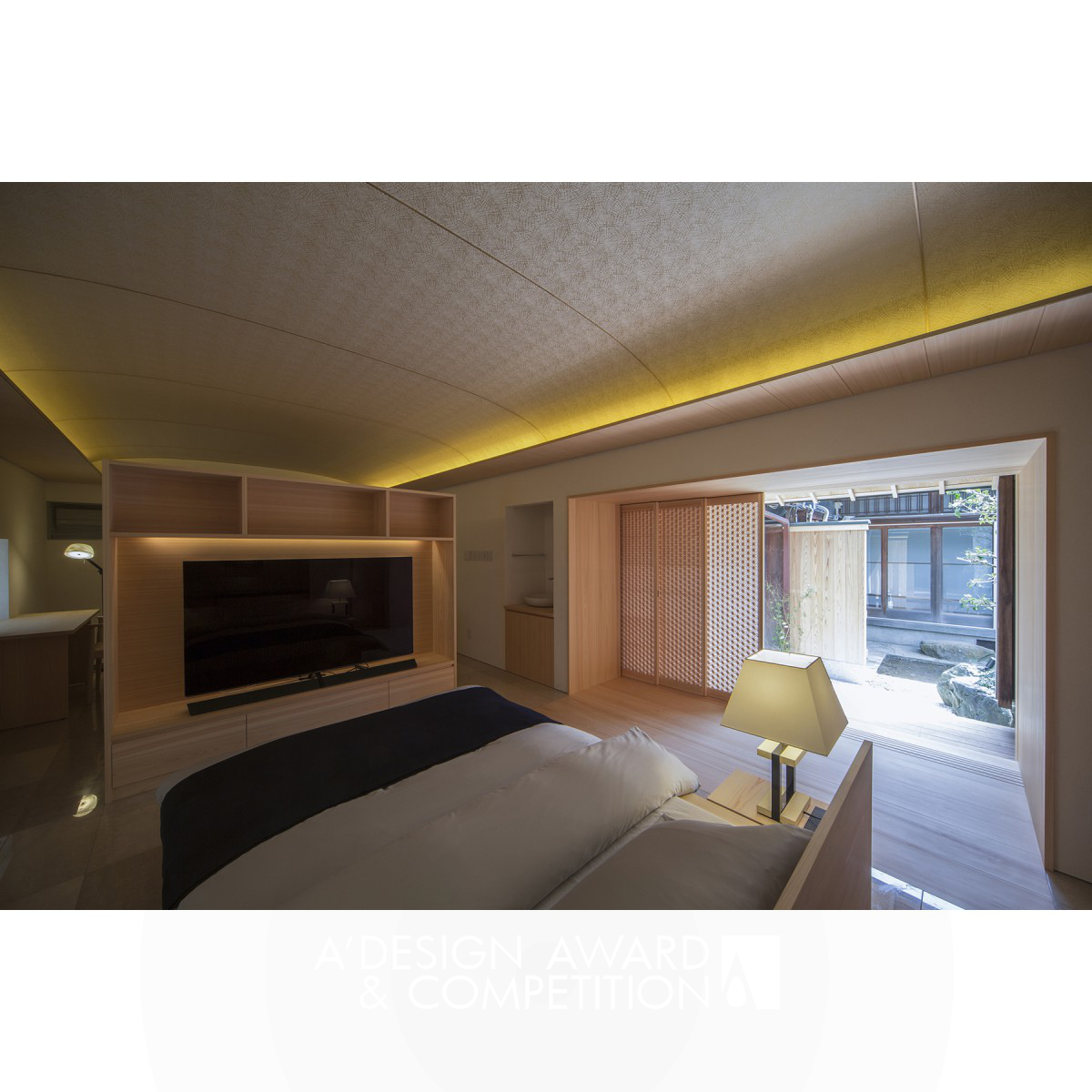 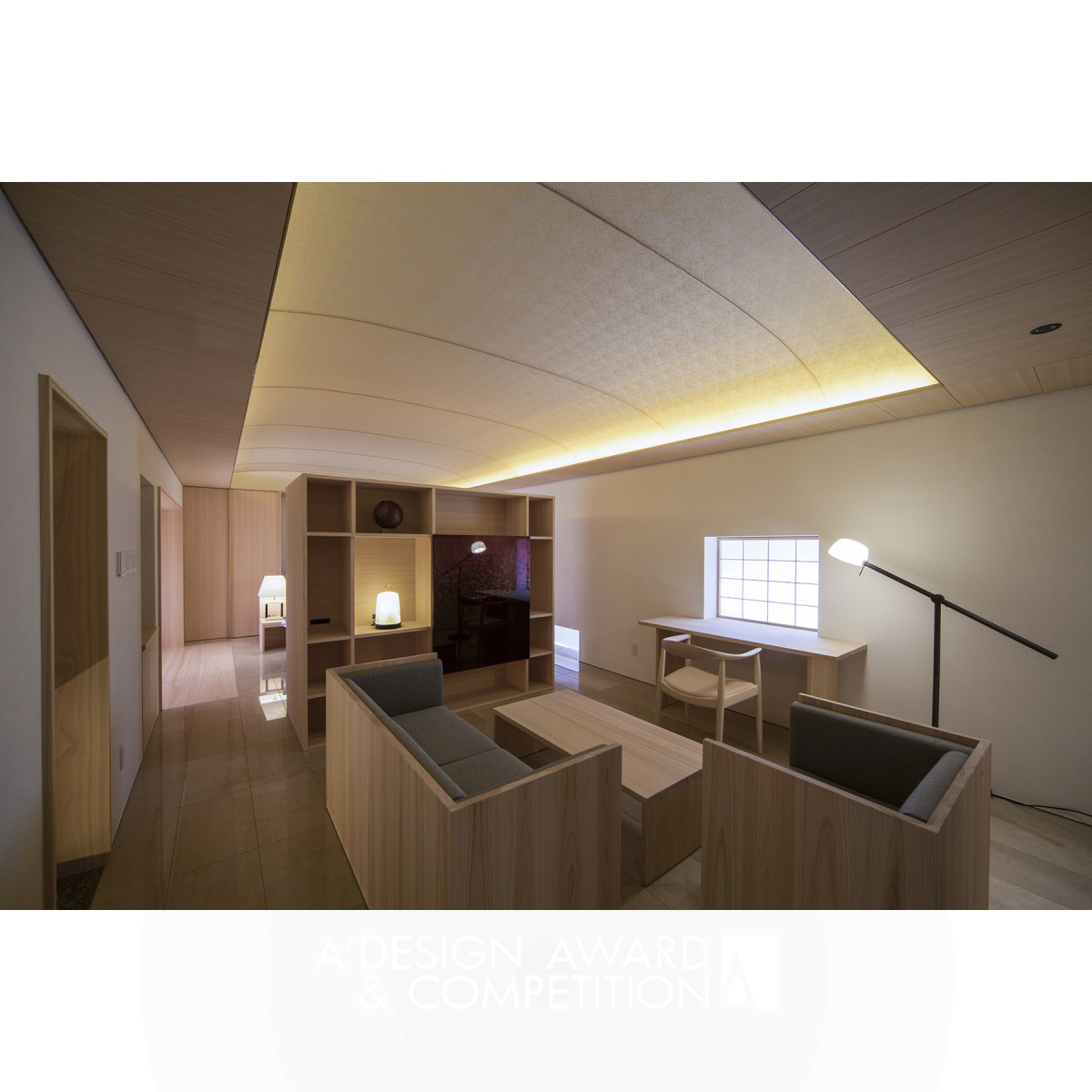 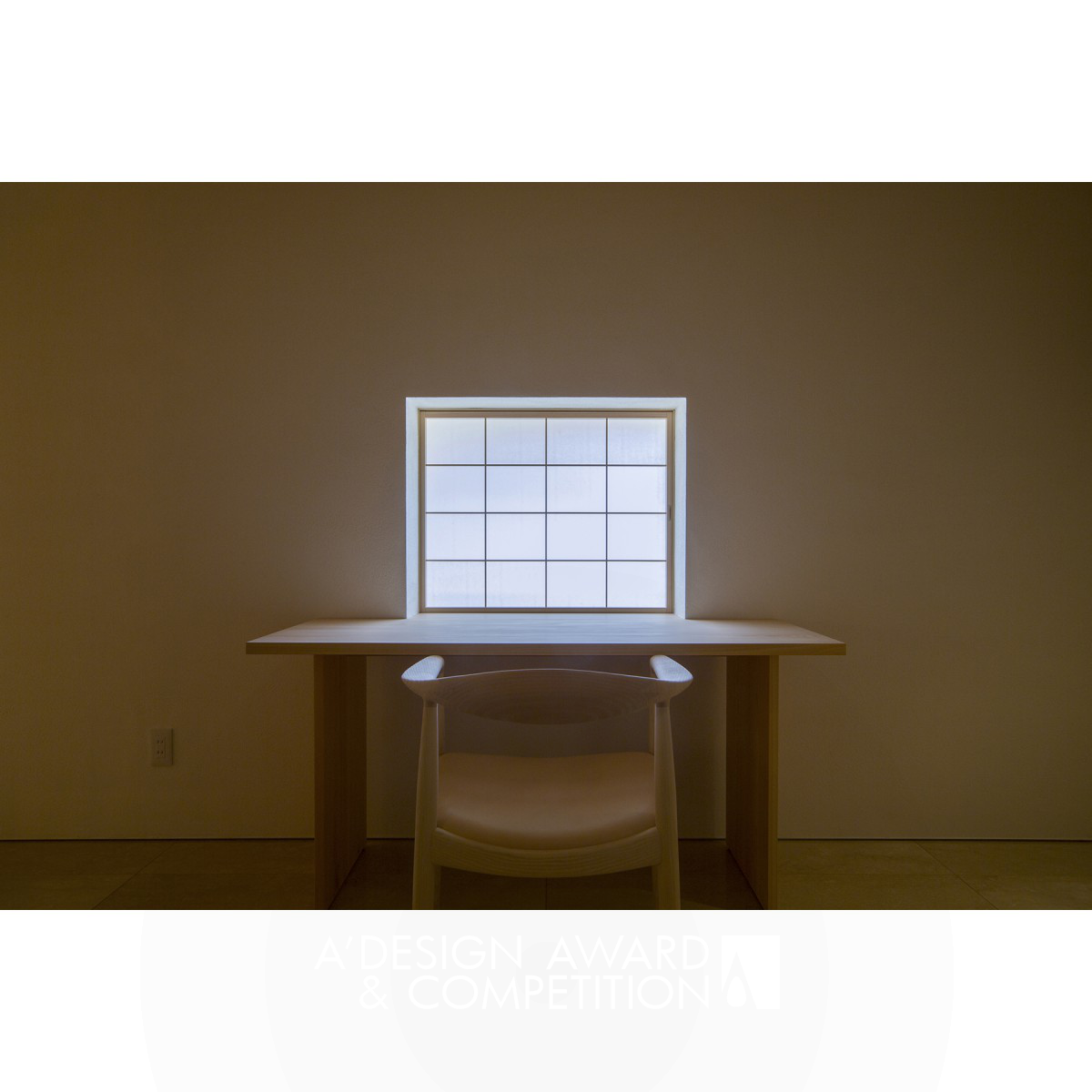 AT : Yozakura Gekka - Cherry Blossoms under the Moon. It began with one painting. This traditional Japanese style painting is called Yozakura Gekka (by Hiroshi Senju), featuring an exquisite weeping cherry tree in blossom lit by the moon light. It was for this painting that the owner wished to have a private space to admire - where he could spend his time quietly and feel the beauty of falling petals. He wanted to create simple but elegant atmosphere like luxurious hotel for his living room/study and bedroom.

AT : To incorporate the owner’s love for the painting and cherry blossoms, the concept for this project was proposed that the painting was to become the center of the house, rather than creating a space to exhibit it.

AT : This design commissioned

AT : My goal is to become a design of cultural diversity who not only understands the Japanese culture and traditions, but also has shared world senses that are embraced in different cultures and countries throughout world.

AT : Newly renovated space is now transformed into the place that would “welcome” the owner back to the place where his beloved painting, "Yozakura Gekka" awaits him.

AT : Thus the name Oukikyo, was given - a house, where cherry blossoms, filled the space.

AT : Nature & Four seasons are introduced. The painting is Spring. Summer: Hemp leaf pattern on sliding doors. Light would come softly through patterned paper screen. Autumn: Maple leaves on the lacquered panel. Winter: Pine-needle pattern woven into silk on the ceiling. Cherry buds would endure cold until the blossom. Winter was essential to complement the painting. Flowing pattern on side door represents water, suggesting bathroom facilities behind. Hinoki was used for furniture & the interior, and Italian marble stones for the floor, providing the mixture of modern and traditional.

AT : Existing beam was 2600 mm in height. It was requested to produce a high ceiling to give a spacious feeling to the study/ bedroom. Therefore the formula for the Super Ellipse “(x/a)^M + (y/b)^M = 1 M=2.5” by Piet Hein (Mathematician) was applied to give this natural and elegant curve. By combining this with the lower ceiling, it would give the effect in visual that this curved ceiling is higher than the actual.

AT : The building was a one-story wooden structure of 66 square meters that was build more than 40 years ago. Upon this renovation, the original main structure was kept unchanged but the west side of the house was made into a large spacious single room containing the living room/ study and the bedroom area. Storage unit between those two areas separates the room but does not close off the space, leaving openness. Kitchen and a bathroom are placed in the east side.

AT : To expand my perspective, I wanted to know how it would be rated in the A 'Design Award & Competition, the largest and most watched in the world.