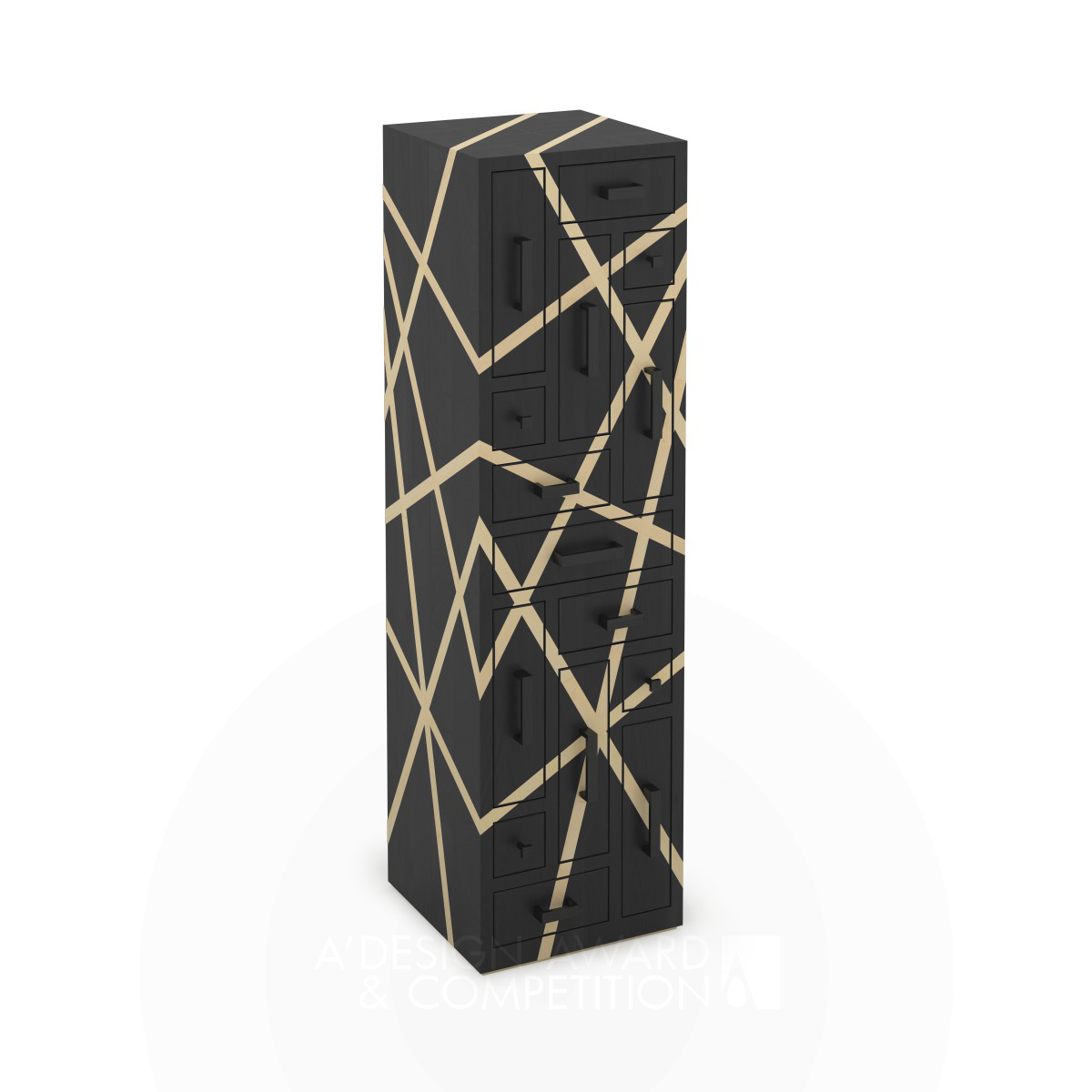 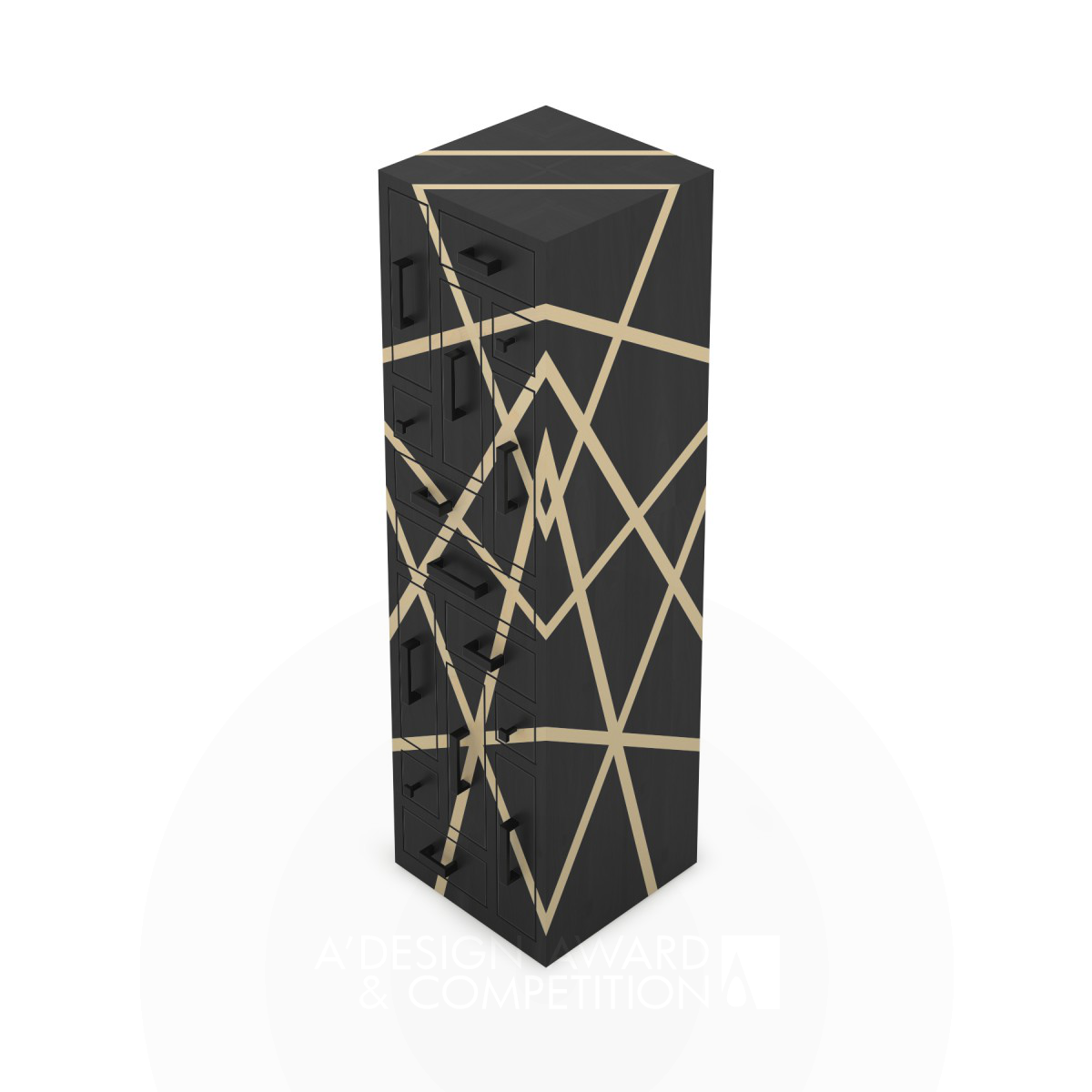 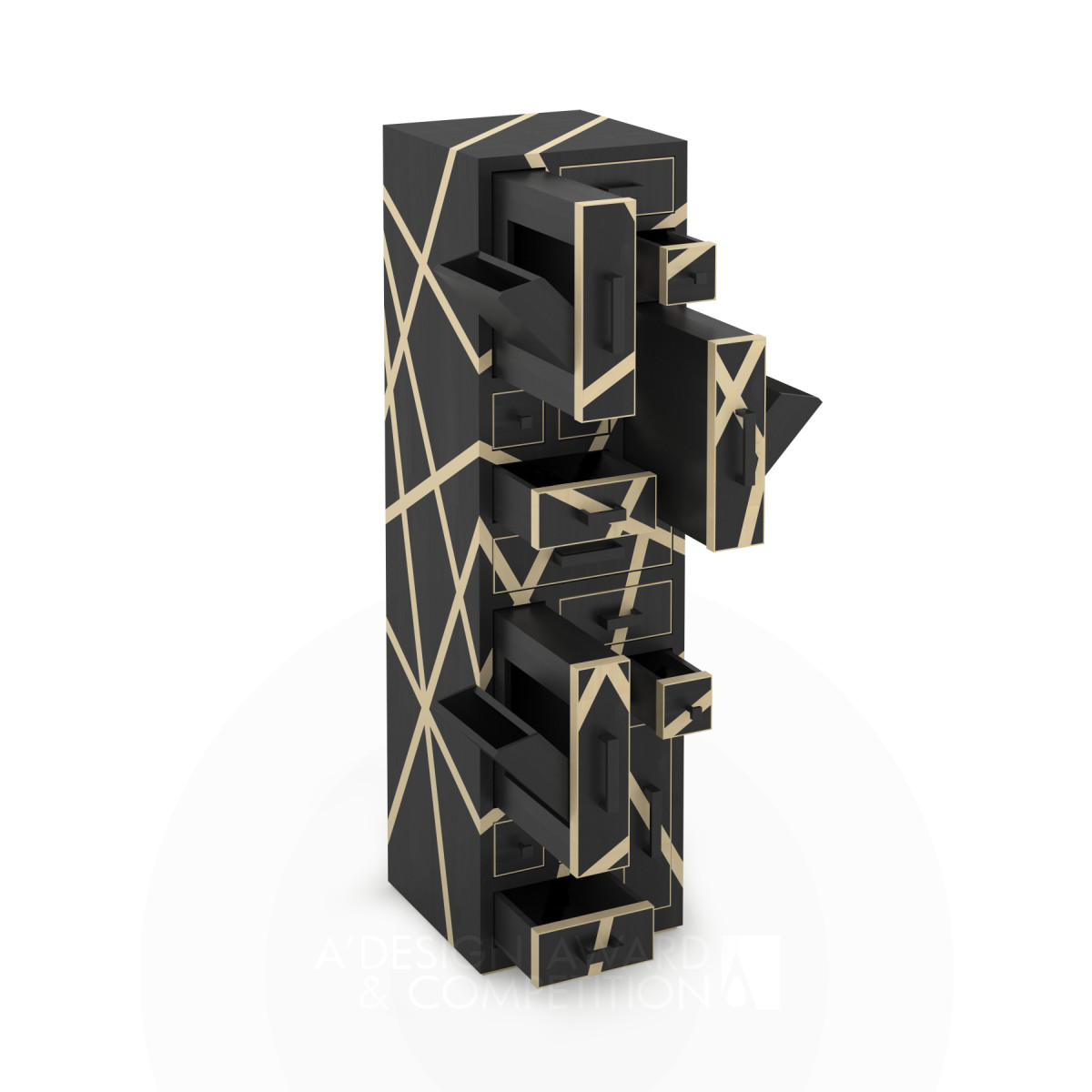 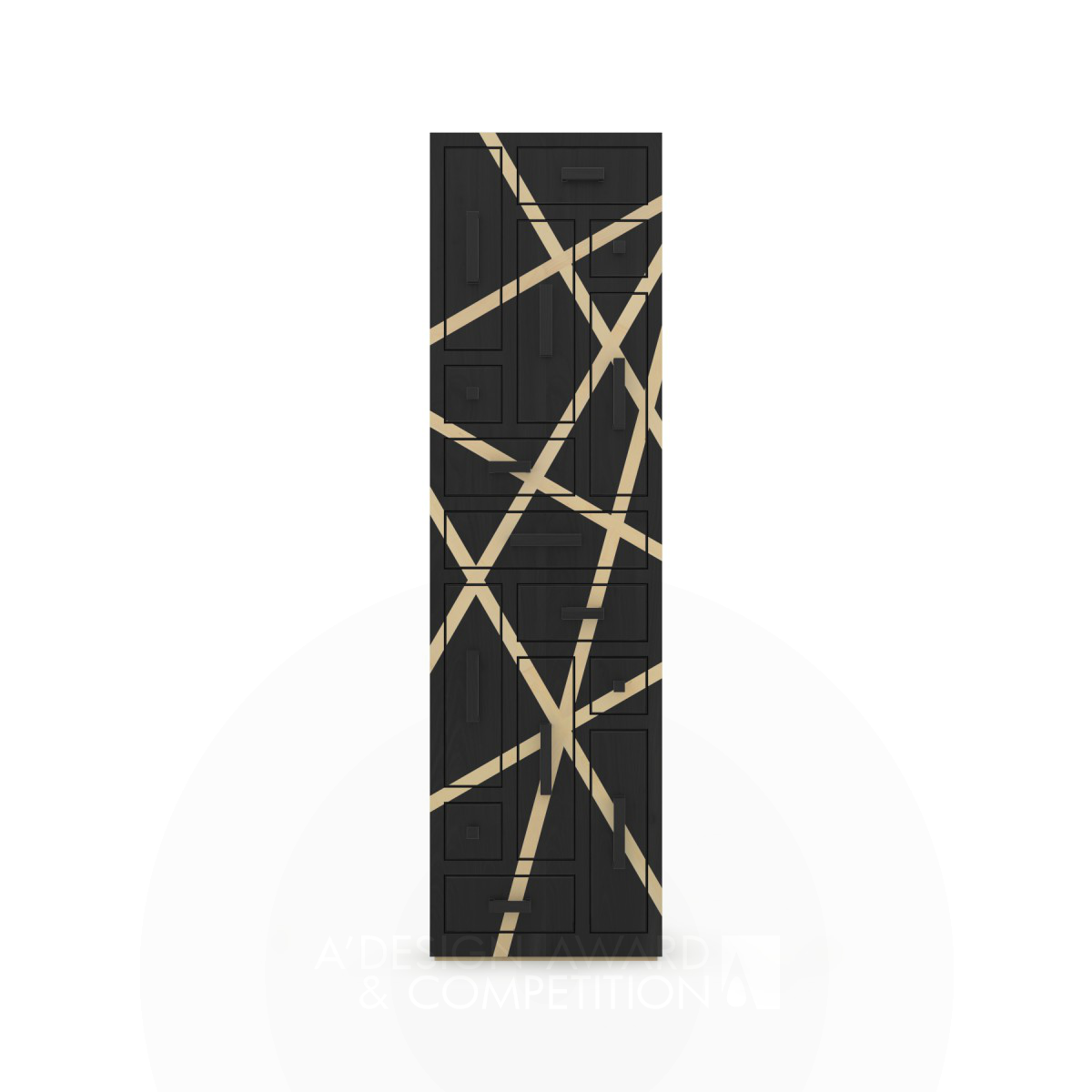 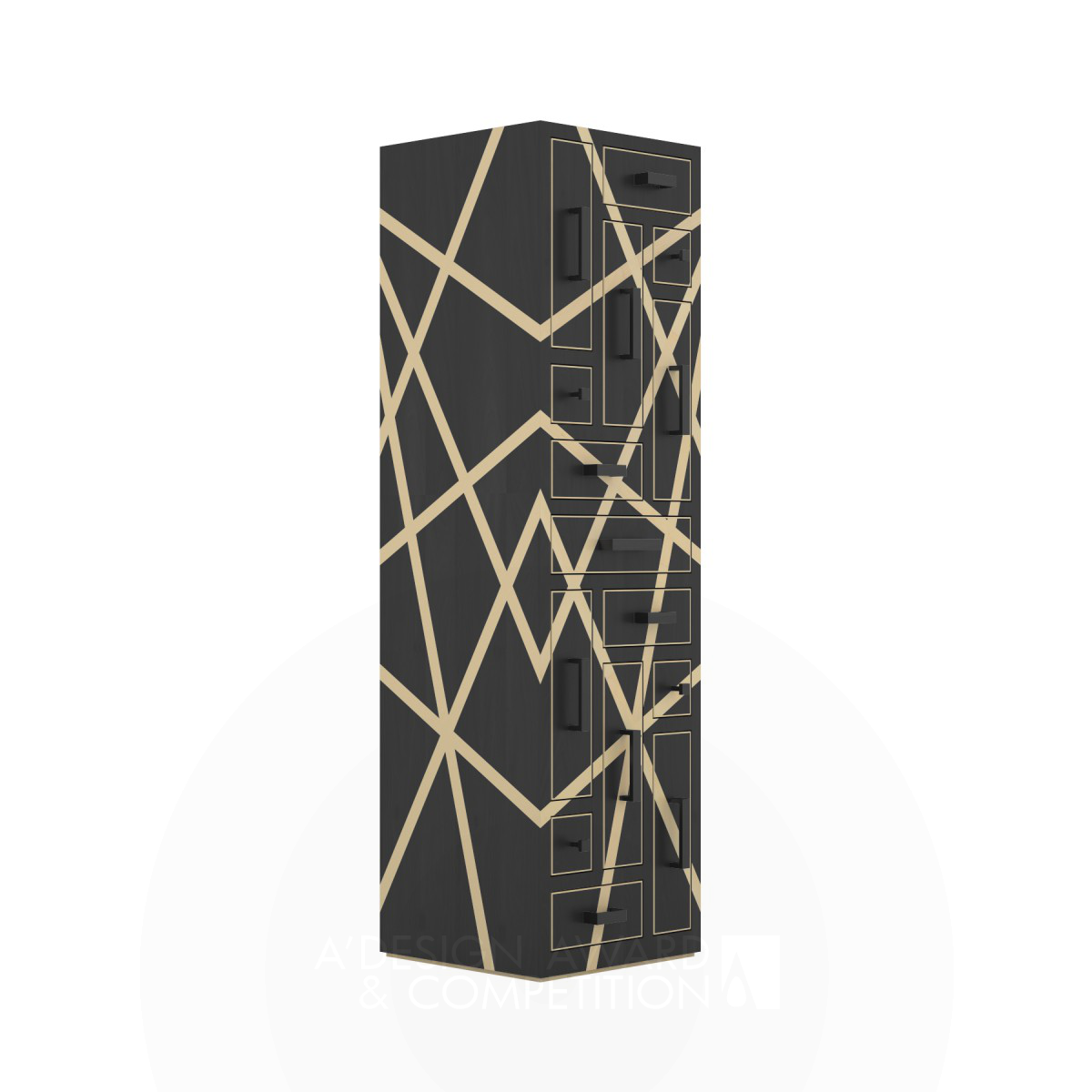 EB : Black Labyrinth’s outline is inspired by the clean lines of the Bauhaus style while the layout of its 15 drawers is inspired by Asian medical cabinets. My idea was to design a chest of drawers as a modern reinterpretation of this concept with a strong emphasis on its aesthetic side while having “secret mechanisms” in its drawers.

EB : Black Labyrinth is meant to be a beautiful object with a function. The main focus during the design phase was to give the graphic layout of the marquetry the right balance between appearing random and being organized. From a functional point of view the focus was to design vertical drawers with a rotating compartment while trying to hide the drawer’s extension mechanisms as much as possible for aesthetic reasons.

EB : I designed Black Labyrinth in my design studio in Geneva during a period of 8 months.

EB : Black Labyrinth, has an older sibling, Labyrinth, which received much attention while being exhibited at PAD, at Venice Design 2016 at Palazzo Michiel in the context of the architecture biennale and at Museo Poldi Pezzoli in Milan. My idea was to further develop the concept and to make a predominantly black contrasting version with a more dynamic graphic marquetry work. The first feedbacks seem very encouraging.

EB : Black Labyrinth is manufactured by manufacturing partners and can be purchased through my company ArteNemus (contact: info@artenemus.com).

EB : Black Labyrinth can be seen as a functional piece of art. I believe that Black Labyrinth’s customer is a person for whom its concept, its aesthetic, its choice of materials and its craftsmanship are important while he or she at the same time appreciates the intricate functionality of the 15 drawers most of which are dimensioned to accommodate A4 documents

EB : The name “Labyrinth” refers to the graphic path of the marquetry, which covers the whole surface of Black Labyrinth. When looking at Labyrinth for the first time, the eye of the beholder is following the path of these marquetry rays.

EB : After the conceptual idea for Black Labyrinth originated in my mind, I started using paper and pencil for its outline and the drawer shapes. Thereafter, for the graphic design of the marquetry, about 40 sketches were necessary to come up with this design that seems random while being organized. The detailed proportions were determined with Rhino as a CAD system. Finally I used Maxwell Render to determine the choice and placement of materials.

EB : The most unique aesthetic aspect of Labyrinth is the bright marquetry rays which originate in three focal points and are mirrored around the whole structure. The most interesting technical aspect are the vertical drawers with their hidden mechanisms and their rotating compartments.

EB : I designed Black Labyrinth on my own. However, I am working with my manufacturing partners for its realization.

EB : CNC technologies as well as traditional wood art craftsmanship skills are required for the manufacturing of the structure and the marquetry rays. Without this combination, it would be difficult to attain the high level of craftsmanship and precision required.

EB : I consider Labyrinth as functional piece of art. In this regard it is a beautiful object with a function that one chooses with one’s eyes and heart. So no analytical research was done for its design.

EB : The major technical challenge in terms of design was to hide the vertical drawers’ extension mechanisms as much as possible while the major manufacturing challenge was the precise manufacturing of the marquetry rays.

EB : I submit those designs I consider good to design competitions for three reasons. Firstly, it allows me to compare my designs to other designers’ creations. Secondly, winning an award and being in a catalogue is good public relations. And finally, it is a great personal satisfaction to win an award.