We had the distinct pleasure to interview award winning designer Jaimie Ota about their original and creative Coffee Table design work. Jaimie Ota is an award-winning industrial designer, that makes our world a better place with their original coffee table works. 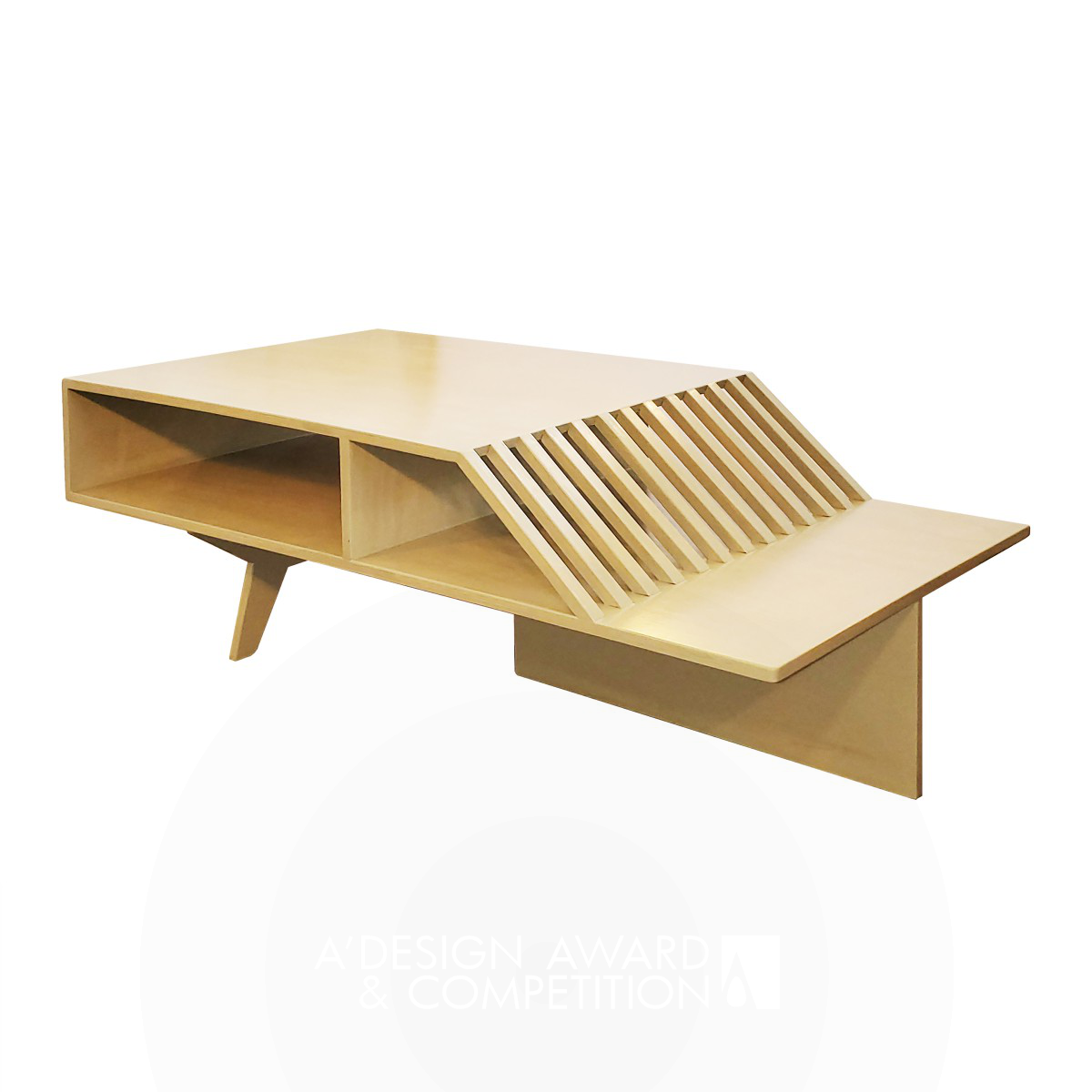 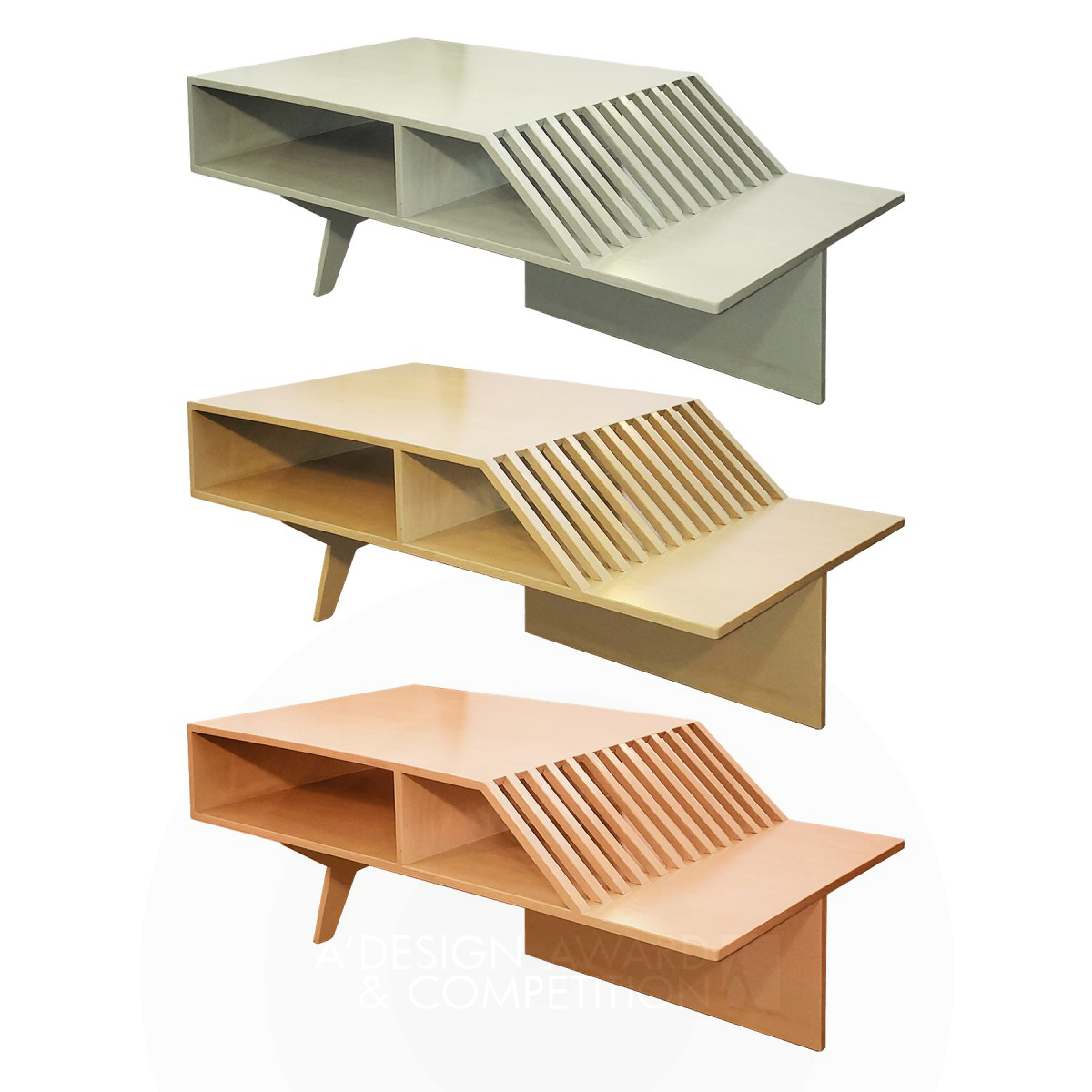 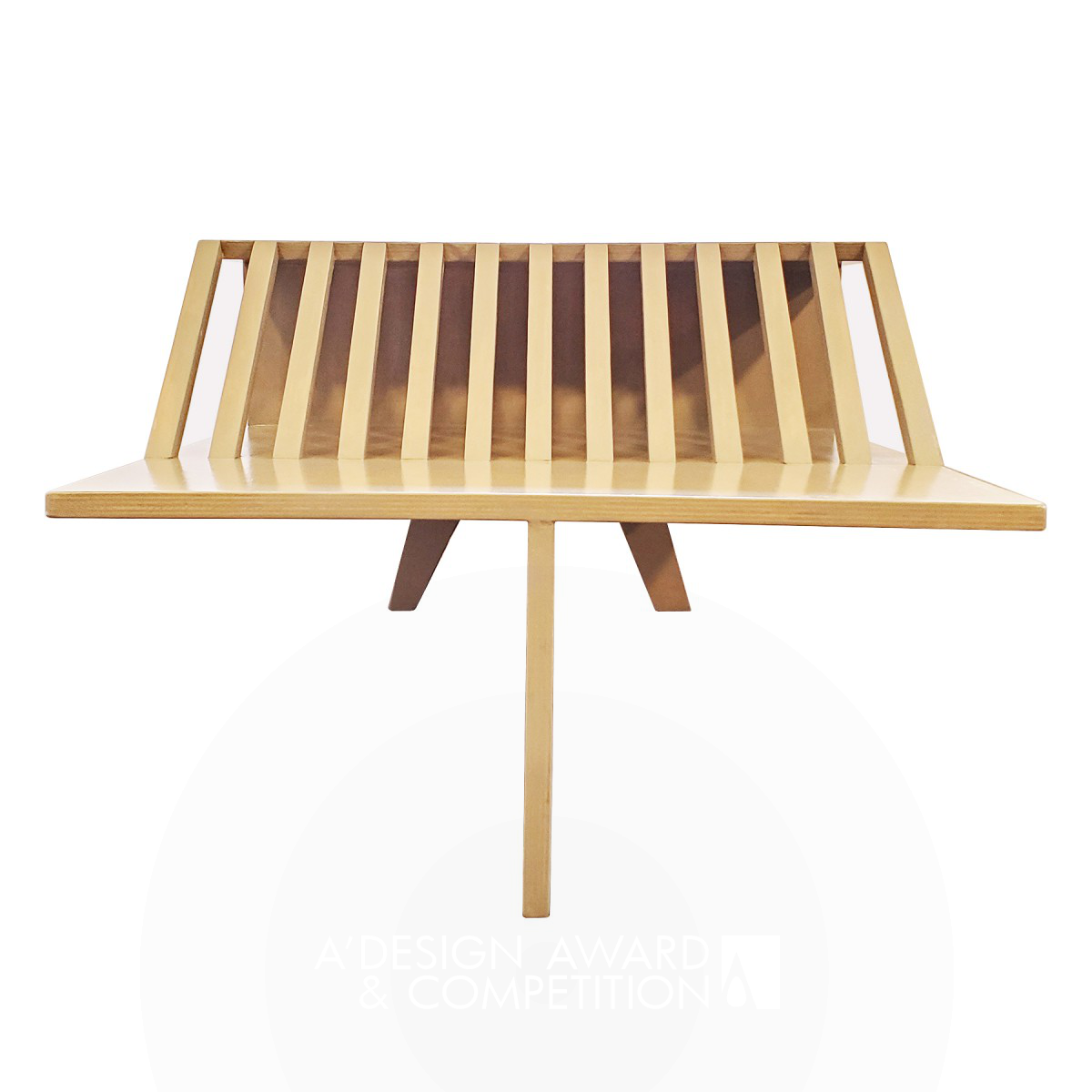 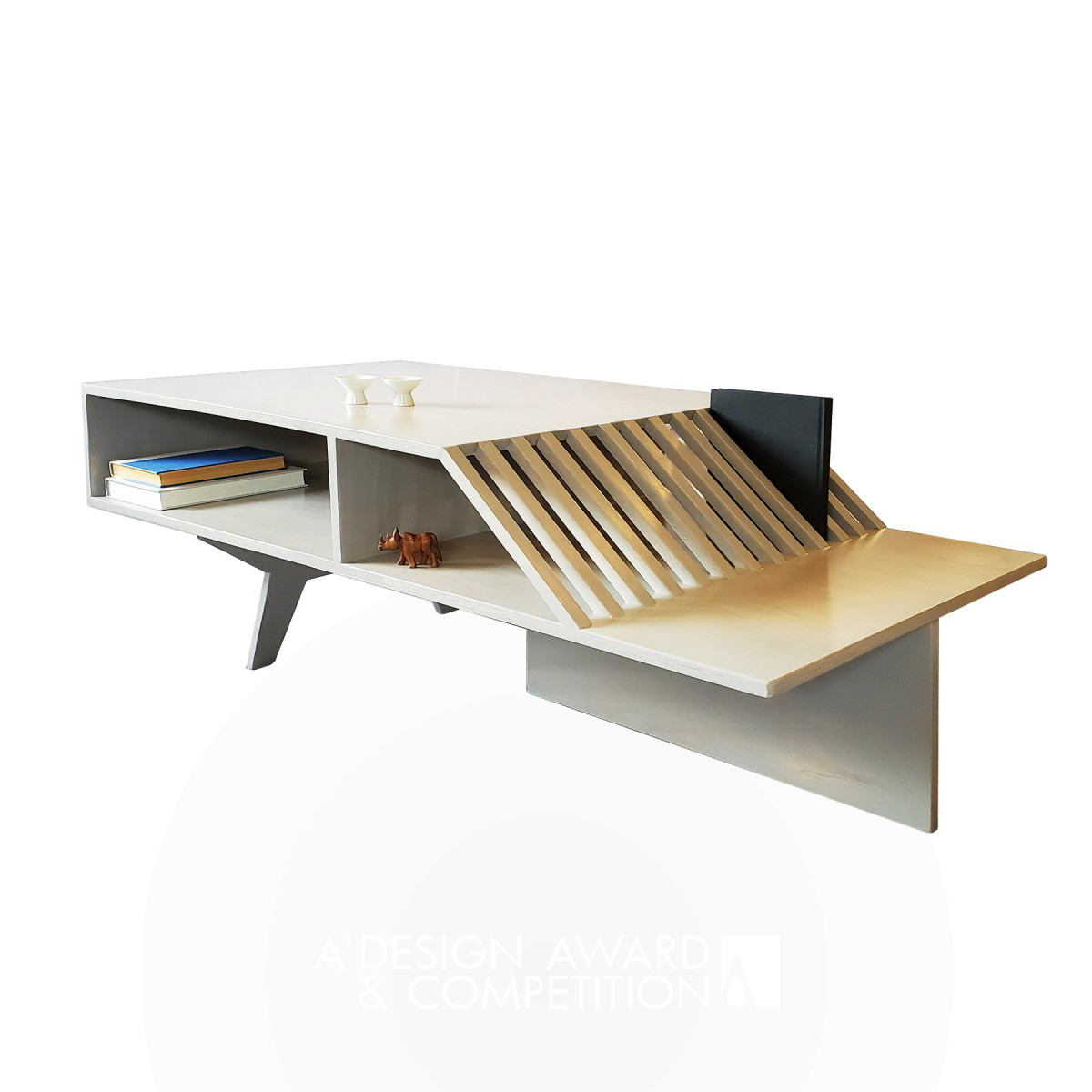 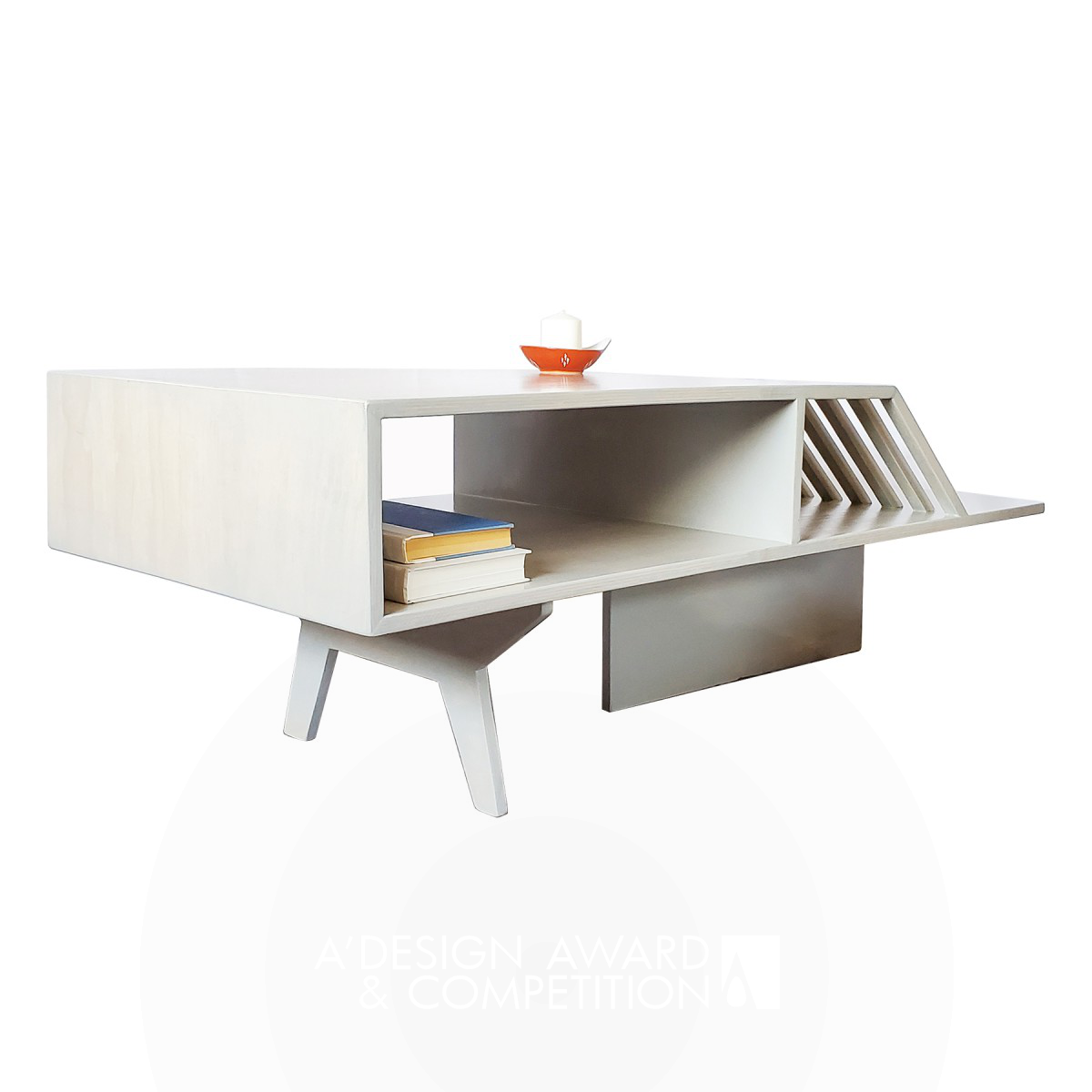 JO : I created the table thinking of how I could challenge its traditional construction. When we initially think of a table we see a flat tabletop with four legs. This is the basic form of how we imagine its support. Instead of supporting it at its corners, why don’t we play with placement and shape. I also thought of my interaction with tables as well. I thought of times that I would stub my toes against the corners. This played a huge role in the unique features of Vadr.

JO : My main focus was to create a functional piece of art. I wanted the design to be aesthetically pleasing, a conversation starter and useful. I wanted to achieve a sensible design that had some quirk, but was not too flashy for a more conservative user.

JO : I would like to put the design into production. I have received feedback on the design and it seems to be received well.

JO : I would say the design developed over a few weeks. It was created for a school project so I was provided a deadline.

JO : I designed this concept because it was a culmination of my skill and interests in design features. I wanted it to have a modern approach, a play on lines and angles, dimension, function and to be considerable for many users. I wanted it to be appealing to many. It needed to be refined, but approachable. It needed to be thoughtful in design, but also make people think of how to use it. It is quite an experience when you see people interact with it. You get a completely different view from all angles of it. It is special because it’s the first table I have ever made myself. It started as a school project for a fun sketch modeling class, with a great instructor, Andrew Putman from Academy of Art University.

JO : I designed this furniture piece because it was an assignment. I felt nervous about the project, but everything leading me up to that moment had prepared me enough. I have studied design for many years and applied my knowledge.

JO : I would say that I am very fond of mid-century modern design. The Eameses are a huge inspiration to me. They have utilized plywood in a number of techniques. They created many pieces that are recognized and continue to withstand the test of time.

JO : I would say the customers would be ranging from age 30-40’s. They appreciate design, but may have limited space for a table. Since this is a coffee table it would work well for small apartments.

JO : I don’t believe this design would be seen anywhere. It is a combination of inspirations and features unique to me. It’s defining and distinctful because it’s a table that will avoid potential toe-stubbing, it looks different from all angles and it has functional features.

JO : The name, Vadr, is derived from the Dutch word “vader” which means “father”. I do not come from Dutch descent; I am Japanese. I found as I designed the table it had a likeness to a feature on a well-known character in a sci-fi movie franchise. I won’t say more about that, but I also have another reason. It is dedicated to my father. I created this along with his guidance and his tips on woodworking. He was a handyman by his own right and could fix a lot of things. This table is a part of a memory where my father witnessed my capabilities and realized what I could create. He understood my passion for design and the pursuits. I lost him before I received the award. This is for you Daddy-O.

JO : I made my sketches in AutoCAD and also constructed a prototype. The prototype was successful and it quickly transitioned to plywood.

JO : I would say there are two unique aspects. One, is the line of neatly arranged slats across the front of the table. I wanted this coffee table to consider organization of coffee table books, it can be used as a bookshelf to display your favorite books or show off some collectibles. Two, is the arrangement of the legs. I wanted users to avoid hitting their toes at the supports. I also wanted to support the table in an unconventional way.

JO : As for the guidance and feedback from my class and instructor, and also my father, I made the design with what was taught up to that point. I have had experience with woodworking tools. I owe this to my previous work experiences.

JO : I receive emails about information within the industrial design community. One of the emails sent notice about the design competition. I didn’t think about entering, at the time, because I did not feel I was ready to compete. Months later, I was contacted directly by a representative suggesting I nominate two of my works. My table was not among the suggested. I took the initiative to submit 3 projects total. By chance, the one that was not mentioned won.

JO : I learned more about the material and the supplies I worked with. This was also my first time competing in an international design competition. The whole journey has been interesting. I have learned not to be so hesitant in showing others my design. I gained a newfound confidence.