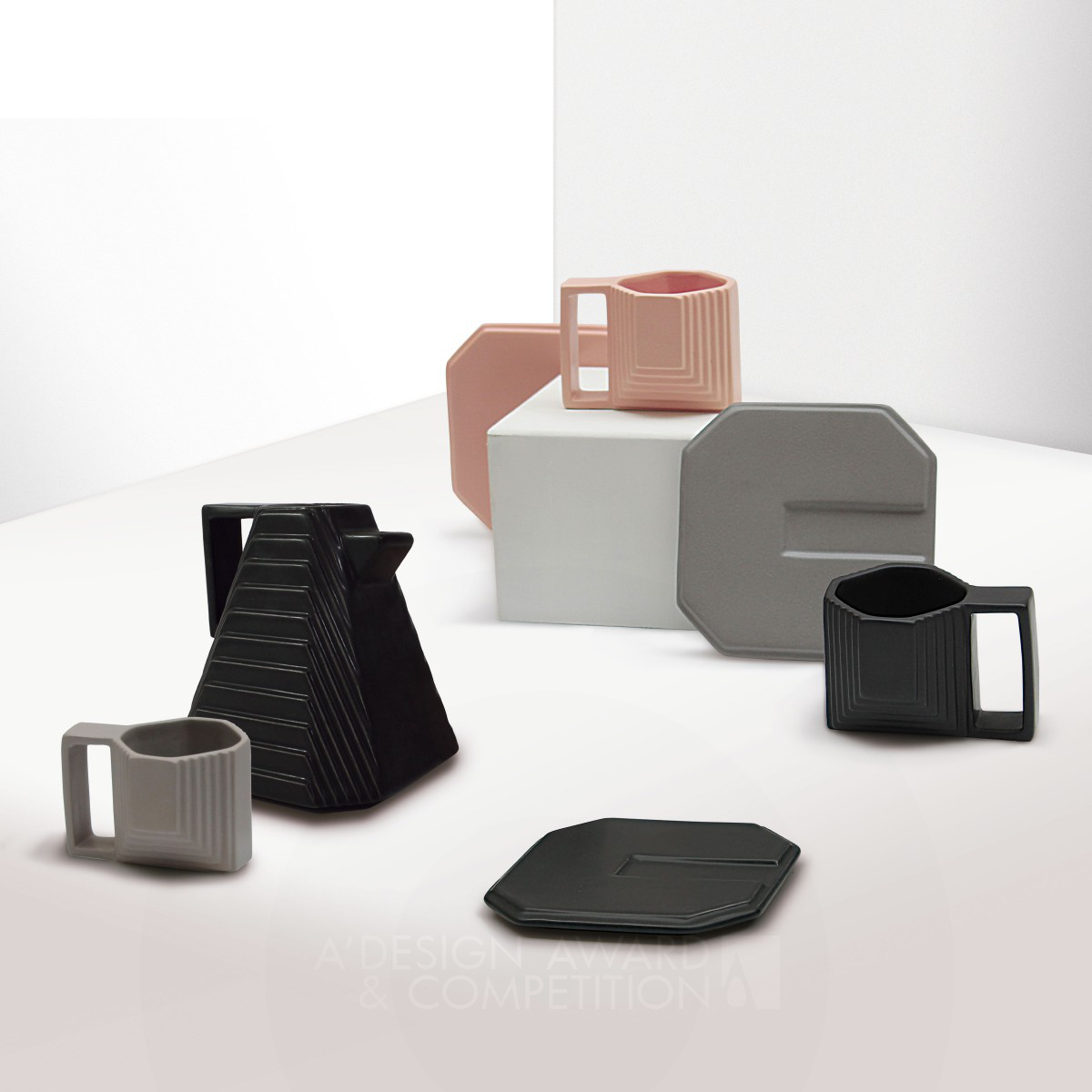 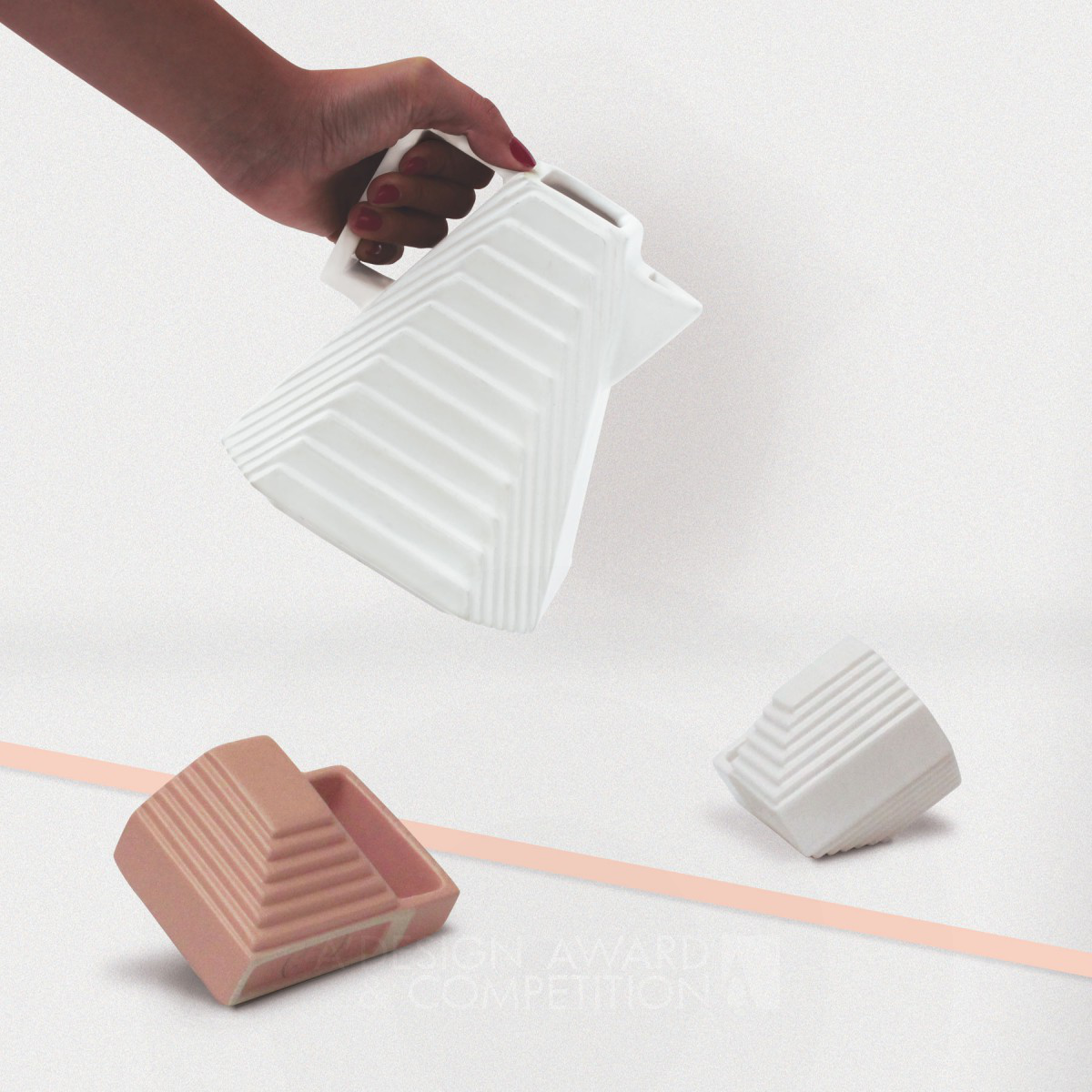 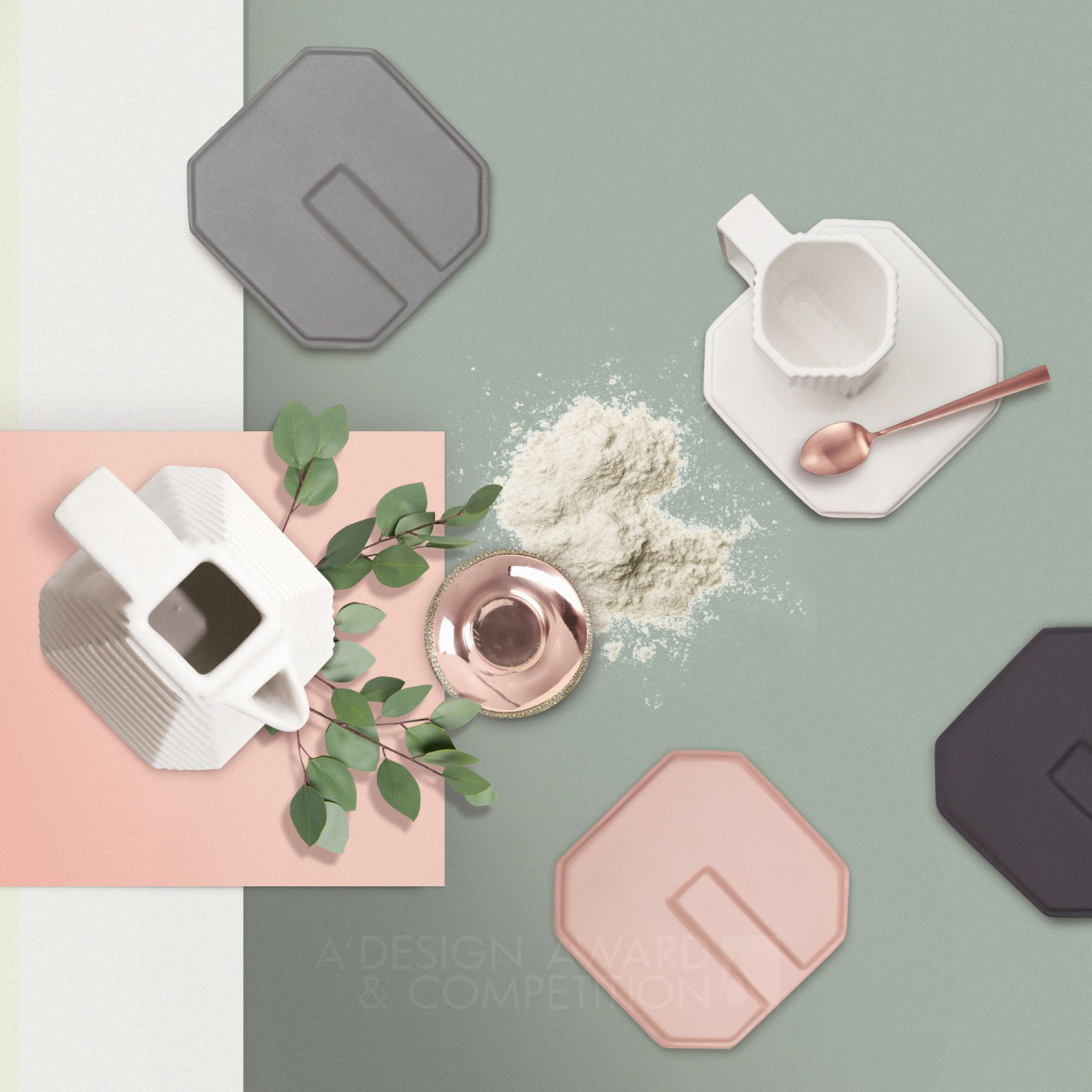 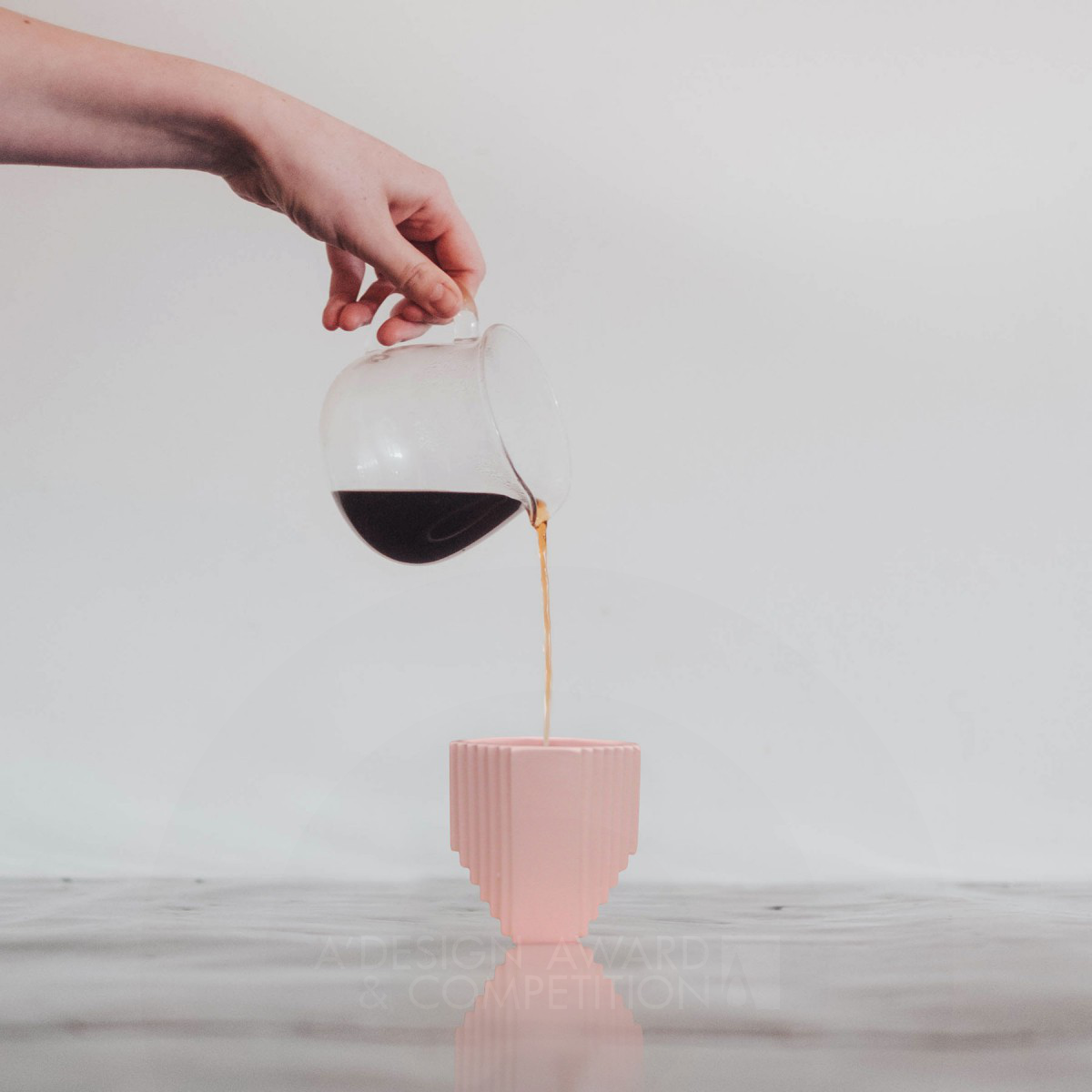 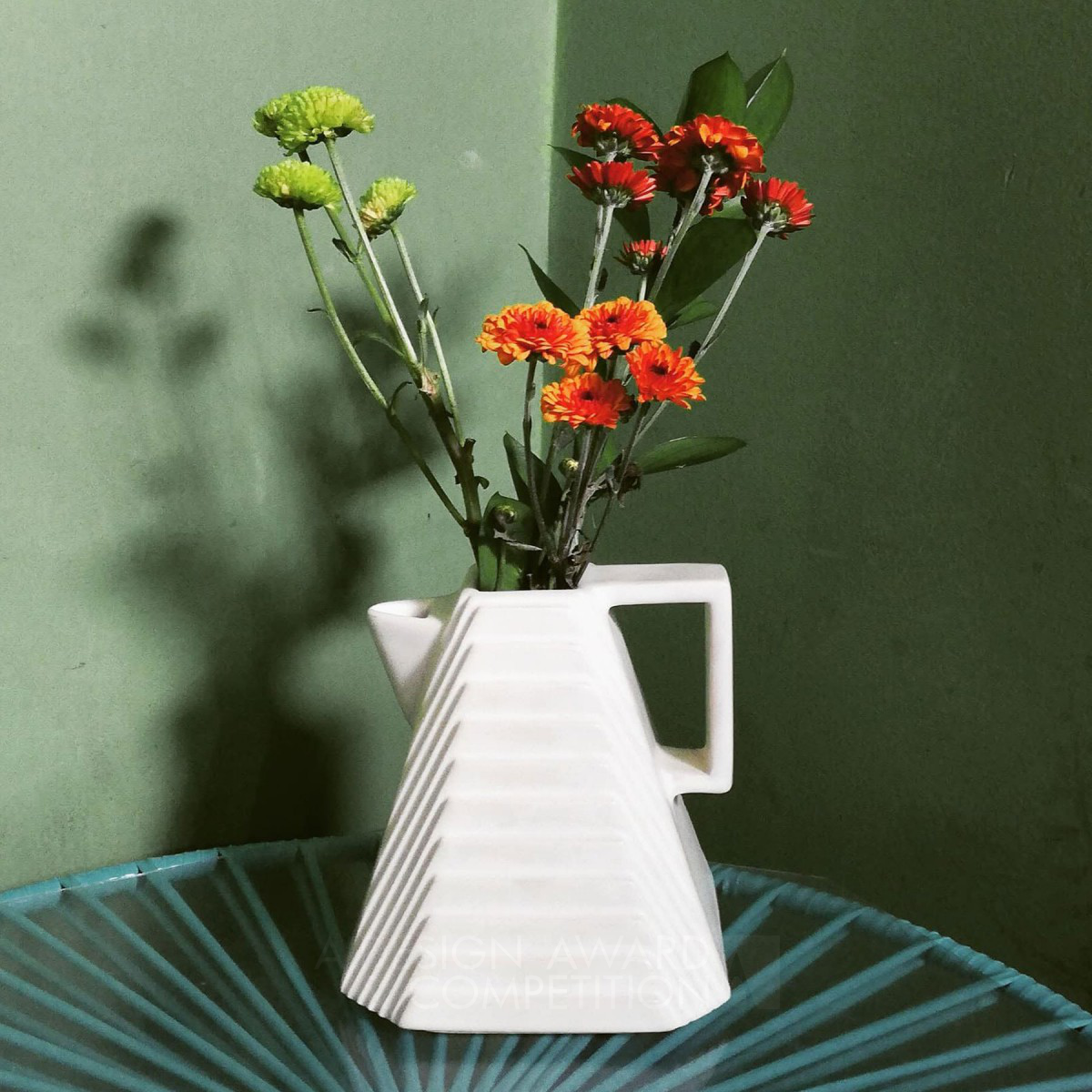 AMGL : Innato is inspired by the duality between classic and modern styles and a constant blend between organic and geometric made possible by the main material itself. Ceramics, often used in very organic and classic scenarios can be given a contemporary/modern feel through shape, color and graphics. It is also inspired by the evolution of prototyping techniques aimed by technology and the impact they can have on how we conceive and design objects and the aesthetics that are somewhat forced by them. The project began as an exploration of the use of technology to design using natural materials like ceramics. Blending contradicting geometries and concepts. And exploiting the benefits of rapid prototyping.

AMGL : I wanted to achieve a product that fell outside of the common and that was interesting on its own. Objects can have a big impact on how we live situations and can become conversation starters and also become representations of our personality. There is meaning behind what and why we own things so distinctive products help make those meanings more visible.

AMGL : It would be great to find a company that would be interested in this product to produce and market on license to a greater audience. Meanwhile, I would also like to consider to continue producing and marketing on my own at a smaller and local scale. I have also considered developing a full tableware / dining set expansion, but we’ll see.

AMGL : This project was started in 2016 and has continued to gradually evolve and develop over years. The latest piece added to the set was the pitcher designed in 2019, the process took about 5 months.

AMGL : This project started as a university short project for a ceramic product class. I presented only a cardboard prototype of the cup only but I had the feeling I was onto something so I pushed it further and continued developing it as a personal initiative, perfecting and adding the pieces to complete the set gradually and slowly.

AMGL : I have produced and sold this design through design fairs and independent design stores and also directly from my brand through social channels. For me personally its challenging to manage the sales side of design so I think I would aspire to find a company that would like to produce and market at a bigger scale and with a more standardized production and quality process.

AMGL : I was introduced to ceramics and immediately fell in love with it, so as a medium I wanted to explore it more in depth to create daily use objects. Also by the time I started there was a big interesting on 3d printing, laser cutting and the like so it just clicked to try to find this connection between worlds that at first might seem separate but can be pleasingly merged.

AMGL : This set is meant for people who appreciate design and want to surround themselves with objects that reflect their style. I believe they can give people a chance to find pleasure in small, everyday things and elevate the ordinary to suit their creative demands, and have their belongings become conversation starters. They are home oriented people who like to host and have very particular rituals around this and like to take care of every detail. For example, the saucer plate of the Innato Set has an indentation to place the cups on it. The additional space created by this placement allows to set a "snacks" like biscuits, muffins or such in the plate, this small detail adds value by making it visually appealing when serving a table.

AMGL : I think the exploration of production itself and the very hard geometric lines make it different from other products we are used to seeing on this category.

AMGL : Innato is spanish for Innate, that is, something inherent in the essential character of something or someone; I believe that is what design is to me. I started a personal brand with the same name and this product and interest for ceramics was really what lead me to doing it, so I wanted it to carry on with that name because it represents a bit of my own essence and passions. There is also a connection with rawness in the name that relates to the material itself.

AMGL : I am very old school in tools for designing so I rely on paper and pencil mostly. For this particular project I did a lot of 3D sketches with paper and cardboard to begin to understand dimensions, proportions and overall structures and ergonomics. Afterwards I used 3d modeling tools like Rhinoceros to create the design and then make the nesting and laser cuts of each layer to create the matrix pieces out of wood. After this the final pieces are obtained through a more semi manual ceramics process of plaster mold casting.

AMGL : I think it is aesthetically different to what we are used to seeing in this kind of products and material. It has a sort of wow visual effect that keeps changing depending on the angle from which you look at the pieces. Very utilitarian pieces can also de understood as functional art.

AMGL : The design in itself is my own but there is a ceramics workshop in Bogotá where I produce my designs, it’s a very traditional mid sized shop owned by a very experienced man on ceramic production. When designing I try to keep close contact with him since he can give advice or help notice things related to technical aspects like the unions in molds or where you pour the material from, etc.

AMGL : Technology played a very important role in this design since it actually led the process and design of the product. A part of the aim of this project was to turn rapid prototyping into final products evidencing their design process and methods in a aesthetically coherent way. The 3d body is the result of the layering of 2D laser cut planes of wood, obtained from a 3D model, which were almost unaltered in the final design.

AMGL : I think when you create sets there is always the challenge of making things cohesive, specially when you are designing with some constraints like in this case was the use of laser cutting and nesting to produce the matrixes for the pieces. Sometime you need to be flexible to achieve proper functionality and experiment a lot until you find the right balance. You will see this for example in the final design of the beak of the pitcher where the strict squared look just wouldn't work.

AMGL : This was the first product i designed in detail with a personal motivation and that I exposed to the general public so it has been sort of an obsession to continue to make it grow. Also, through out fairs and participations I was usually asked where the design was from, it was always unexpected to say it was from Colombia. I think this is an opportunity to showcase local design as something that goes outside of the traditional lines.

AMGL : I made this as a personal project while I continued studying or later working a regular job so perhaps thats why I spent so much time finishing the collection but from this I learned that even if it takes time you shouldn't completely give up on things. In the end you find the way to do things and also to continue to explore and improve designs. Also the fact of creating just for the satisfaction of doing it, with no deadlines, no client, no obligation is a great way to discover what you are passionate about and gives you a wide range of possibilities for explorations, we should treasure that and do it more often. I think being a bit obsessive about something and feeling the potential of projects, following those hunches, is something we also learn as we design.